β-catenin is a critical mediator of the Wnt canonical pathway for multiple cellular responses. Using transgenic mice, loss or activation of β-catenin has been studied in multiple tissues to elucidate its role in vivo. In this editorial, we focus on recent findings examining the involvement of β-catenin in cancer initiation and progression of epithelial tissues in thymus and prostate. 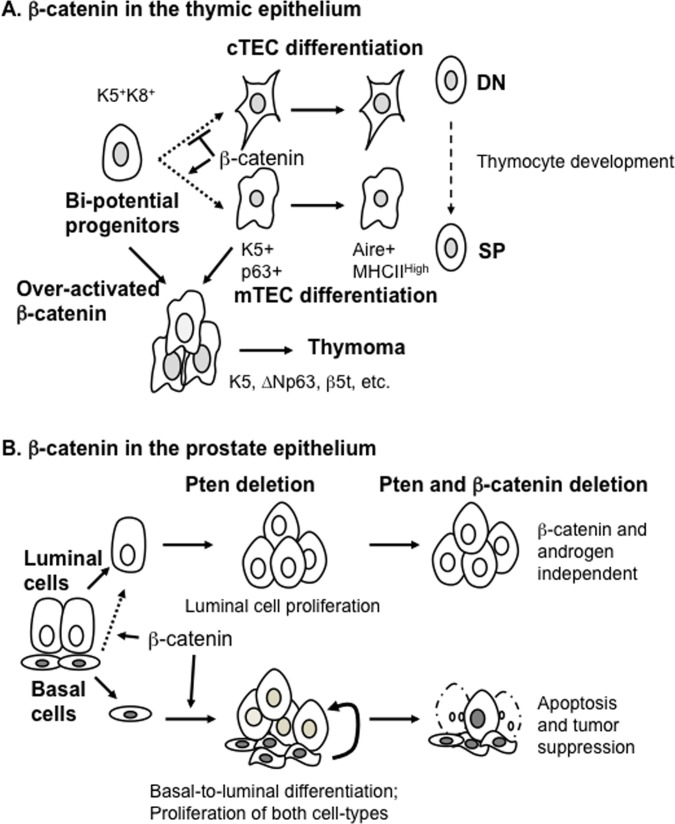 In addition, expression of the ∆N64Ctnnb1/ERT2 transgene in mTECs can activate Wnt/β-catenin canonical signaling and drive thymoma initiation and progression [2]. Early thymoma lesions driven by the ∆N64Ctnnb1/ERT2 transgene are frequently identified at the cortical-medullary junction (CMJ) of the transgenic thymi. Interestingly, the CMJ of the thymus is hypothesized to be the anatomic location of bi-potential progenitors that can give rise to both cTECs and mTECs. Thus, this observation implies that the thymic epithelial progenitors at CMJ are susceptible to β-catenin oncogenic signaling during thymoma development. The thymoma lesions express K5, ∆Np63 (α and β isoforms), and β5t, which is a protease subunit used as a differential diagnostic marker of human type B3 thymomas. Consistent with expression patterns found in human thymomas, ∆N64Ctnnb1/ERT2-mediated thymomas showed loss of AIRE and downregulation of p21. Moreover, histologic characteristics of ∆N64Ctnnb1/ERT2 transgene-induced thymomas have a squamoid appearance and loose connective tissue in the perivascular space resembling that of human type B3 thymomas (or atypical thymomas). Thus, our recent findings demonstrate that β-catenin oncogenic signaling drives K5-expressing thymoma initiation and progression (Figure 1A).

β-catenin in the prostate epithelial lineages and cancer. Basal and luminal epithelial cells are two major cell types of the prostate gland. Both luminal and basal cells in the adult prostate are largely generated from their corresponding cell lineages [3-5]. At the adult stage, approximately 2% of luminal cells can be generated from prostate basal cells under intact and prostate regeneration conditions using lineage-tracing approaches [3, 4]. β-catenin ablation in prostate luminal cells is not required for prostate epithelial homeostasis [6]. Interestingly, specific ablation of β-catenin in prostate basal cells blocks basal-to-luminal differentiation, indicating a critical role of β-catenin in this process [7] (Figure 1B).

Taken together, our findings indicate that Wnt/β-catenin canonical signaling is essential for cellular differentiation of bi-potent epithelial progenitors in thymus and prostate. Aberrant β-catenin activation in the K5-expressing epithelial derivatives of the thymus and prostate gland promotes tumor progression.