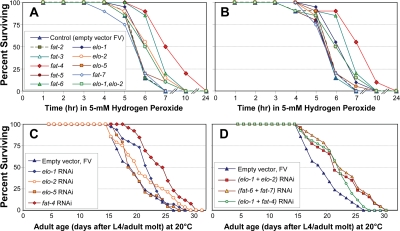 Figure 4. Survival of peroxide stress, and unstressed longevity, of C. elegans adults after elongase- or desaturase-specific knock-down by RNAi. A, B: Worms (25 per group) were fed on E. coli expressing either the indicated siRNA construct (Ahringer RNAi library []) or empty-vector control, for 3 days beginning at the L4/adult molt. They were then placed in bacteria-free medium containing 5-mM hydrogen peroxide, freshly diluted from stock solution, and survival was monitored as described previously [,,]. A and B show replicate experiments, assessing effects of RNAi's targeting desaturase (fat-2, -3, -4, -5, -6 or -7) or elongase genes (elo-1, -2 or -5). C, D: Worms (35 worms per group, on 2 plates) were fed the same RNAi constructs as above, continuously from the L4/adult molt, and their survival monitored as described [,,]. C, strains treated with single RNAi constructs as indicated; D, strains treated with pairs of RNAi constructs, following a protocol for combining RNAi treatments []. C and D together comprise a single experiment, with which replicates (not shown) agreed.