Dr. Nira Cedres from The Karolinska Institutet as well as The Stockholm University said, "Multiple pathologies can co-exist in cognitively unimpaired individuals, causing neurodegeneration years before the onset of cognitive decline."

Dr. Nira Cedres from The Karolinska Institutet as well as The Stockholm University said, "Multiple pathologies can co-exist in cognitively unimpaired individuals, causing neurodegeneration years before the onset of cognitive decline."

Increasing research is trying to ascertain whether individuals are able to subjectively detect such neurodegeneration, motivating the emergence of concepts like subjective cognitive decline, as a risk factor for dementia. Several studies showed that SCD may be a harbinger of Alzheimer’s disease. However, community-based studies show that SCD can also be associated with cerebrovascular disease, age-related tauopathy, and emotional factors such as depressive symptomatology.

While some authors reported reduced GM volume or thickness in hippocampus, precuneus, cingulum and frontal cortex in SCD individuals compared with healthy controls, other authors reported no differences, or even increased GM volume in fusiform gyrus and occipital areas in SCD. In addition, previous studies operationalized SCD mostly based on episodic memory complaints and had a strong focus on AD. Hong et al. investigated 46 SCD patients, of which 19 had a high risk of progressing to AD and 27 had a low risk of progressing to AD based on age, APOE genotype, and cognitive performance. Using DTI, Hong et al. showed that SCD patients at a high risk of progressing to AD had greater neurodegeneration in frontotemporal WM areas, while no differences were found in cortical thickness.

The overall goal of the current study was to extend the previous research on GM and WM neurodegeneration in SCD. 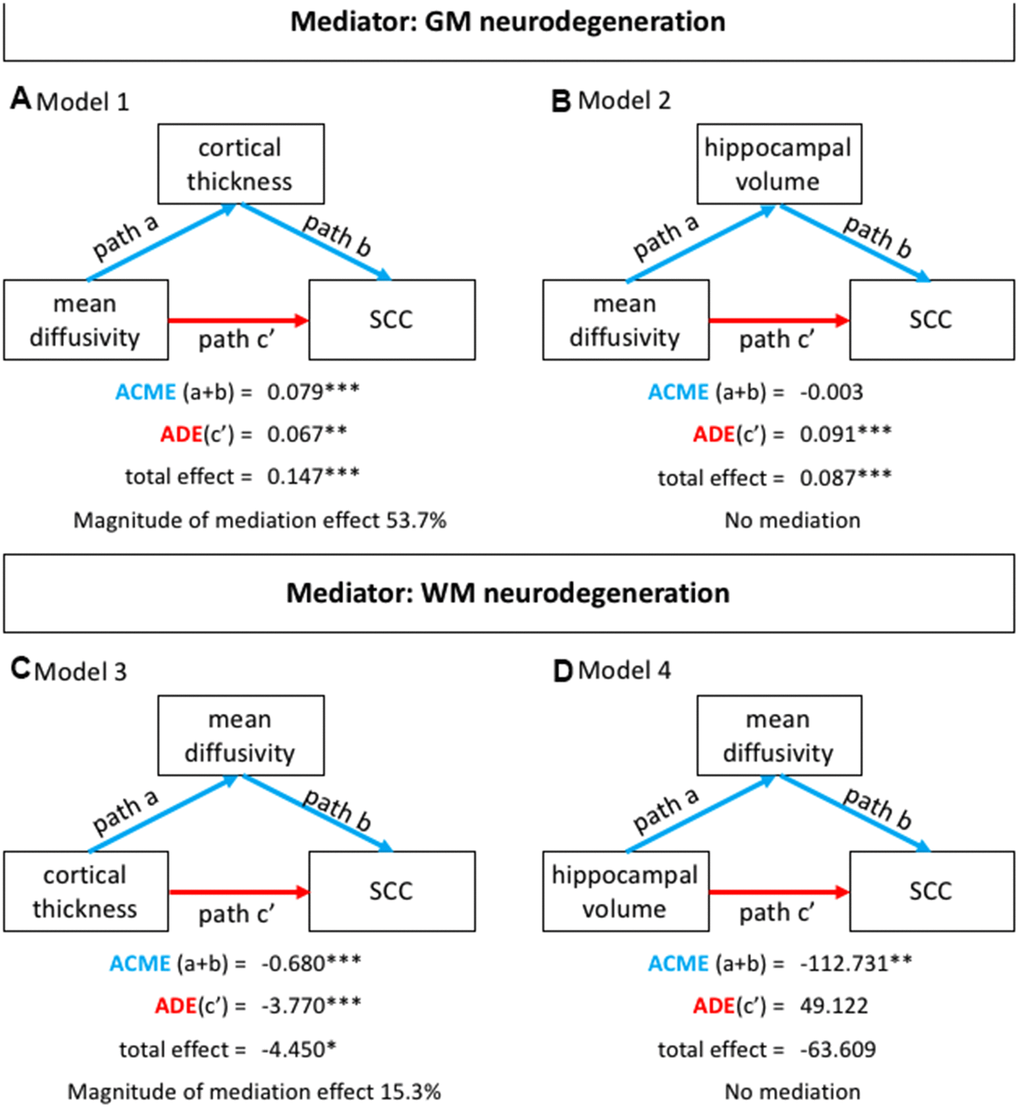 The Cedres Research Team concluded in their Aging-US Research Output that this study is one of the few in investigating the association between GM and WM neurodegeneration in SCD. These data suggest an association between neurodegeneration processes affecting the GM and WM in SCD individuals. However, GM neurodegeneration seemed to have a stronger contribution to SCD in our community-based cohort, highlighting brain areas that are typically not targeted by AD. This finding suggests the contribution of non-AD pathologies to SCD, and encourages that future studies extend imaging analysis to brain areas other than those typically involved in AD.

Launched in 2009, Aging-US publishes papers of general interest and biological significance in all fields of aging research as well as topics beyond traditional gerontology, including, but not limited to, cellular and molecular biology, human age-related diseases, pathology in model organisms, cancer, signal transduction pathways (e.g., p53, sirtuins, and PI-3K/AKT/mTOR among others), and approaches to modulating these signaling pathways.

To learn more about Aging-US, please visit http://www.Aging-US.com or connect with @AgingJrnl