CENP-A, a protein required for chromosome segregation in mitosis, declines with age in islet but not exocrine cells

Beta-cell replication dramatically declines with age. Here, we report that the level of CENP-A, a protein required for cell division, declines precipitously with age in an islet-specific manner. CENP-A is essentially undetectable after age 29 in humans. However, exocrine cells retain CENP-A expression. The decline in islet-cell CENP-A expression is more striking in humans than in mice, where CENP-A expression continues to be detectable at low levels even in elderly mice. The mechanism by which CENP-A declines appears to be post-transcriptional, as there was no correlation between CENP-A mRNA levels and age or islet purity. This finding has implications for efforts to induce beta-cell replication as a treatment for diabetes.

Inducing beta-cell replication as a means of increasing beta-cell mass is a major goal of diabetes research. There has been tremendous controversy about the extent to which beta-cells replicate, but it is becoming increasingly clear that in adult animals and humans, the rate of beta-cell turnover, whether by replication or neogenesis, is low under most circumstances [1,2,3]. In mice, beta-cells have been found to replicate in a small number of physiologically relevant settings, including during embryogenesis and early in postnatal life, during pregnancy, and in response to obesity [4]. In humans, it appears that postnatal beta-cell replication is more variable than in mice, but there are indications that most takes place during infancy [5]. Beta-cell replication declines precipitously with age in mice [1,6] and in humans, where age-related loss of replicative ability and expression of important beta-cell transcription factors occurs [7]. Recently, examination of the rate of lipofuscin in human beta-cells revealed that there was little to no beta-cell turnover in adult humans [2]. A similar finding, also in humans came from examination by radiocarbon dating and BrdU incorporation [3].

While beta-cell replication appears to decline with age, that does not mean that it cannot occur with an appropriate stimulus. In vivo, growth factors such as exendin-4, EGF, and gastrin have been studied as potential inducers of beta-cell replication [8]. In vitro, Hayek and coworkers reported that human beta-cells can be stimulated to enter the cell cycle in vitro when cultured on a complex extracellular matrix [9], but this has been disputed as possibly being due to replication of exocrine cells contaminating the islet preparations [10]. Recently, it was reported that overexpression of cdk6, an important cell cycle regulatory protein, induced human beta-cells to enter the cell cycle [11]. However, there was no evidence of actual proliferation as determined by an increase in the number of beta-cells.

In the absence of a reproducible and efficient means of inducing beta-cells to replicate in vivo or in vitro, studying beta-cell replication must rely on the examination of the expression of proteins that are important in that process [12]. Centromere Protein A (CENP-A) is a 17 kDa member of the histone family. It is over 60% identical in amino acid sequence to histone H3 at the C-terminus, but is highly variable at the N-terminus. It is found in the nucleosomes of active centromeres, where it is found in place of histone H3. Its presence is required for centromere function, with absence leading to chromosome mis-segregation and cell death [13]. It may also play a role in repair of double stranded DNA breaks [14]. CENP-A expression is regulated throughout the cell cycle at both the transcriptional and post-transcriptional levels [15]. However, it is thought to be expressed ubiquitously. To date, there are no studies that have demonstrated age-related changes in the expression of CENP-A.

CENP-A protein decreases with age in human islets, but not exocrine cells

In the human pancreas, CENP-A protein expression exhibited an inverse relationship with age. In the human fetal pancreas, where 7 different pancreases were examined, 100% of beta-cells exhibited nuclear staining for CENP-A (Figure 1a, d). This staining occurred in a punctuate pattern and no difference was observed in the pattern of CENP-A between beta-cells and other cells in the pancreas. CENP-A expression in beta-cells declined rapidly with age and by age 30 was undetectable (Figure 1b, c, e, f, quantitated in g). Alpha-cells also lost CENP-A with age (Figure 1h, i). In contrast to beta-cells, exocrine cells continued to express CENP-A at approximately the same level from ages 18-45 (Figure 1k-n, quantitated in o). 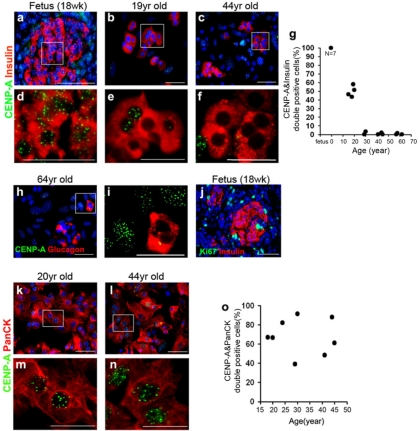 In the mouse, CENP-A protein expression also declined with age (Figure 2a-f, quantitated in g). However, unlike the human pancreas, it continued to be detectable in the majority of beta-cells even at 16 months, the last time point examined. While CENP-A continued to be expressed in most beta-cells, the number of CENP-A foci in the nucleus declined with age (Figure 2d, e, f, quantitated in g). In contrast with the human pancreas, mouse CENP-A was upregulated in dividing cells compared with non-dividing cells (Figure 2h-m). In the human fetal pancreas, the only place where a substantial number of dividing cells could be detected in the pancreas, there were no cells expressing high levels of CENP-A, despite the presence of dividing cells expressing Ki67 (Figure 1a, j). 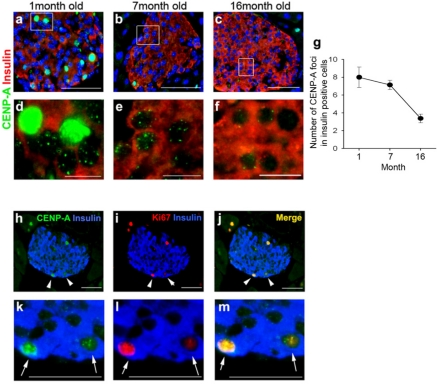 CENP-A mRNA levels do not change with age 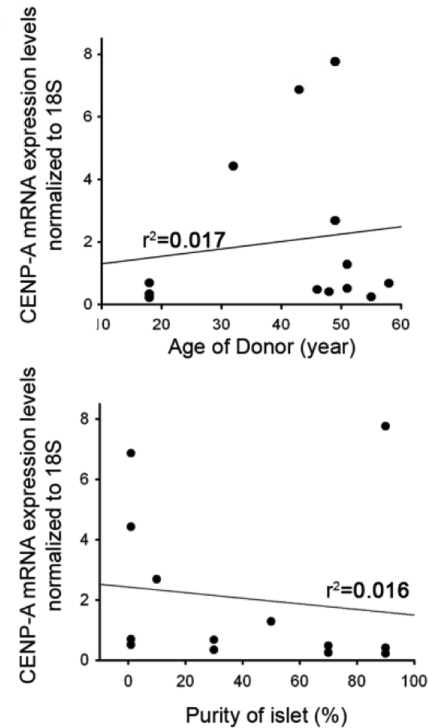 While it is clear that beta-cell replication declines with age in humans and mice, the responsible mechanism(s) remain to be elucidated. Prior to this report, the only cell cycle regulatory protein that had been shown to exhibit age-related change was the cyclin dependent kinase inhibitor p16INK4A, which increases in beta-cells with age in vivo [16,17], and in human beta-cells stimulated to divide in vitro [18]. Recently, it was shown that Ezh2, a histone methyltransferase that is part of a Polycomb transcriptional repressor complex, represses p16INK4A in beta-cells and declines with age in both mice and humans, leading to an increase in p16INK4A expression [16]. Interestingly, the kinetics of decline described for Ezh2 appear similar to what we found for CENP-A, with both exhibiting substantial loss by early adulthood. Also of note, the increase in p16INK4A and decrease in CENP-A is beta-cell specific, as in neither case is there a change with age in the exocrine pancreas [17] (Figure 1).

CENP-A has not been recognized to be a senescence marker and so its loss in beta-cells over time might reflect a phenomenon other than simple cellular senescence. CENP-A is regulated by FoxM1 [19] and its mRNA increases following partial pancreatectomy [20]. The ability of CENP-A to access centromeric chromatin is regulated by histone acetylation, and treatment with the histone deacetylase inhibitor trichostatin A allowed CENP-A to bind to centromeres in cells lacking lacking the centromere protein hMis18α [21]. Treatment of human islets with trichostatin A did not result in increased CENP-A expression (unpublished results). However, we find here that the decline in CENP-A is due to post-transcriptional regulation, which has not been previously reported.

Because CENP-A is required for cell division, the finding that it declines with age suggests the possibility that increased p16INK4A is not solely responsible for the decline in beta-cell replication with age, particularly in humans. It cannot be determined whether CENP-A is completely absent from beta-cells or whether its expression has decreased below the limit of detection of immunostaining. Decreasing CENP-A by RNAi, which reduces but does not eliminate gene expression, led to a profound defect in cell division, suggesting that even partial loss of CENP-A could be significant [22].

Clearly, the possibility exists that more defects in aged beta-cells remain to be uncovered. The finding reported here does not rule out a model in which there is a common upstream regulator of CENP-A, p16INK4A, and possibly other proteins that play a role in age-related replicative decline, but the fact that p16INK4A is transcriptionally regulated while the decline in CENP-A appears to be post-transcriptional suggests that multiple mechanisms may be operative. The possibility that multiple events are involved in distinct proliferative defects could greatly complicate efforts to enhance beta-cell replication.

The antibody to human CENP-A has been used extensively in the past [24,25]. It was further characterized by us by transfection (Lipofectamine 2000, Invitrogen) into mouse 4T1 cells of an expression vector encoding a human CENP-A-GFP fusion gene [14]. GFP-expressing cells stained only with human CENP-A antibody and there was no staining in untransfected mouse cells (Supp. Figure).

For quantitative analysis, cells were scored as positive for CENP-A if any immunofluorescence signal was detected in nucleus. More than 1000 PanCK and 100 insulin positive cells were counted from each human donor. More than 20 islets were analyzed in the mouse pancreas for each animal.

Total RNA extracted from human islets and exocrine cells with RNeasy Mini kit (Qiagen). 1ug of total RNA prepared for cDNA and 2ul of cDNA used as template. Human CENP-A PCR conditions were 5 min at 94 °C, followed by 28 cycles of 94 °C for 45 sec, 60 °C for 45 sec, and 72 °C for 45 sec. Quantitative RT-PCR used the Opticon Real-Time System (BioRad), with SYBR Green (BioPioneer). RT-PCR for 18S rRNA was used for normalization.

This work was supported by the Sanford Children's Health Research Center, the Juvenile Diabetes Research Foundation, and the J.W. Kieckhefer Foundation. We thank Samantha Zeitlin for helpful discussions and Dr. James Shapiro and the personnel of the University of Alberta Islet Isolation Center for providing cells.