Reduction of body temperature has been proposed to contribute to the increased lifespan in calorie restricted animals and mice overexpressing the uncoupling protein-2 in hypocretin neurons. However, nothing is known regarding the long-term effects of calorie restriction (CR) with adequate nutrition on body temperature in humans. In this study, 24-hour core body temperature was measured every minute by using ingested telemetric capsules in 24 men and women (mean age 53.7±9.4 yrs) consuming a CR diet for an average of 6 years, 24 age- and sex-matched sedentary (WD) and 24 body fat-matched exercise-trained (EX) volunteers, who were eating Western diets. The CR and EX groups were significantly leaner than the WD group. Energy intake was lower in the CR group (1769±348 kcal/d) than in the WD (2302±668 kcal/d) and EX (2798±760 kcal/d) groups (P<0.0001). Mean 24-hour, day-time and night-time core body temperatures were all significantly lower in the CR group than in the WD and EX groups (P≤0.01). Long-term CR with adequate nutrition in lean and weight-stable healthy humans is associated with a sustained reduction in core body temperature, similar to that found in CR rodents and monkeys. This adaptation is likely due to CR itself, rather than to leanness, and may be involved in slowing the rate of aging.

Calorie restriction (CR) without malnutrition increases lifespan and healthspan in rodents and non-human primates [1,2]. Several studies have documented a lowering of core body temperature by CR in mice, rats and rhesus monkeys [3-6]. Interestingly, ad-libitum-fed transgenic mice overexpressing the uncoupling protein 2 in hypocretin neurons (Hcrt-UCP2) also have a lower core body temperature, and a 16% greater life expectancy than wild type animals, independently of caloric intake [7]. In the Baltimore Longitudinal Study of Aging (BLSA) men with a core body temperature below the median lived significantly longer than men with body temperature above the median in the absence of CR [8].

No information on the effects of long-term CR without malnutrition on 24-h core body temperature in humans has been published. The purpose of the present study was to measure the core body temperature in healthy, weight-stable members of the Calorie Restriction Society, who have been consuming CR diets, containing adequate protein and micronutrients, for years. Mean 24-hour, day-time and night-time core body temperatures of the CR group were compared with values obtained in two comparison groups: 1) age- and sex-matched sedentary subjects consuming a Western diet (WD), and 2) age-, sex-, and body fat-matched endurance runners consuming a WD.

Mean BMI values were different between the three groups (Table 1). Total body fat were similar in the CR and EX groups, and lower than in the WD group (Table 1).

Characteristics of the study subjects 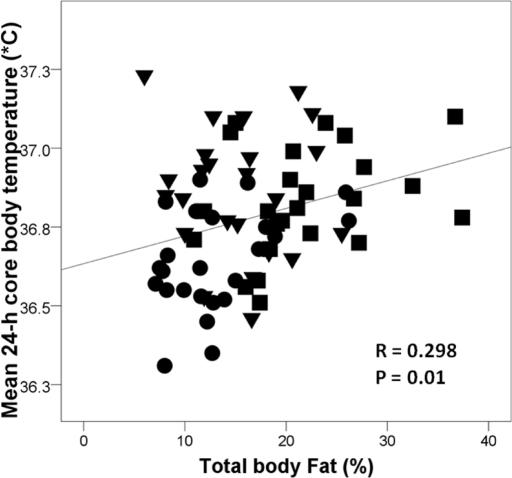 In this study, mean 24-hour, day-time and night-time core body temperature were all significantly lower in the CR group than in the WD and EX groups. This reduction in 24-h core body temperature is consistent with findings in CR rodents and monkeys studies [3-6], and may contribute at least in part to the anti-aging effects of CR.

Although we found a significant correlation between % body fat and 24 h body temperature, it seems likely that the reduction in core body temperature induced by CR is largely related to CR itself, rather than changes in body composition. Mean 24-hours, day-time and night-time core body temperature were ~0.2 °C lower in the CR than in the EX group, even though percent body fat was similarly low in these groups. However, energy intake was ~37% lower in the CR than in the EX groups. It has been hypothesized that the CR-mediated reduction in body temperature relates to the induction of an energy conservation mechanism during CR [11]. In humans, monkeys and rodents long-term CR (but not endurance exercise) reduces the circulating levels of triiodothyronine [12-15] which controls energy homeostasis, body temperature, and cell respiration [16, 17]. The decrease in T3 could play a role in mediating the decrease in body temperature, and the reductions in T3 and temperature could influence the rate of aging by reducing metabolic rate and oxidative stress.

It is interesting in this context that body temperature is also reduced in the long-lived dwarf and growth hormone receptor KO mice [18, 19]. As in CR rodents, circulating levels of IGF-1, insulin and thyroid hormones are reduced in the dwarf and growth hormone receptor KO mice [20]. In contrast, in humans practicing long-term CR do not have lower circulating IGF-1 levels [21], suggesting that a down-regulation of the IGF-1 pathway is not involved in mediating the reduction in body temperature. The importance of a reduction of body temperature in modulating longevity has been also supported by the data obtained from the Hcrt-UCP2 mice and the Baltimore Longitudinal Study of Aging (BLSA). Overexpression of the uncoupling protein 2 in hypocretin neurons causes an elevation of hypothalamic temperature that leads to a 0.3-0.5°C reduction in core body temperature, and a significant increase in longevity, independently of caloric intake [7]. In the Baltimore Longitudinal Study of Aging (BLSA), men with core body temperatures below the median lived significantly longer than men with body temperatures above the median in the absence of CR [8].

In conclusion, the results of this study provide evidence that long-term CR, with adequate intake micronutrients, in healthy, weight-stable individuals is associated with a reduction of mean 24-hour, day-time and night-time core body temperature, similar to that found in calorie-restricted rodents and monkeys.

Three groups (24 participants/group) were studied. One group (CR group) had been consuming a CR diet with adequate nutrients for a 6±3 years (range 3-15 yrs) and were members of the Calorie Restriction Society, who we asked to come to St.Louis to participate in this study. The CR Society members practice severe CR, because they believe that CR will markedly increase their disease-free longevity. Most of them live in North America, although there are also some CR Society members in England, Scandinavia and Japan. The second group (EX group), were endurance runners who had been running an average of 46 miles/wk (range 22-89 miles/wk) for 20±10 yrs (range 7-34 yrs), and were recruited from the St.Louis area. The EX group was matched on age, sex, and percent body fat with the CR group. The third group (WD group) were healthy sedentary (regular exercise <1h/week) normal weight individuals, recruited from the St.Louis area, who were eating a WD. The WD group was matched on age and sex with the CR and EX groups. The characteristics of the study participants are shown in Table 1. None of the participants had evidence of chronic disease, smoked cigarettes, or were taking medications that could affect the outcome variables. All participants reported weight stability, defined as less than a 2-kg change in body weight in the preceding 6-mos. This study was approved by the Human Studies Committee of Washington University School of Medicine, and all participants gave informed consent before their participation.

Participants recorded all food and beverage intakes for 7 consecutive days. Food records were analysed by using the NDS-R program (version 4.03_31).

Twenty-four hour core body temperature was measured every minute using radiofrequency telemetered thermometers (CorTemp, HQ Inc, Palmetto, FL). Each thermometer pill contains a crystal quartz oscillator which transmits core temperature readings within ± 0.1 °C through a low frequency radio wave to an external receiver/data logger [27]. All the subjects tested were on a stable diet, at a stable weight, and without acute illness or recent hospitalization. The participants were instructed to refrain from exercise for at least 48 hours prior to CorTemp pill ingestion. Mean 24-hour, daytime (8 AM-10:30 PM), and nighttime (2 AM-5 AM) temperatures were computed.

One-way analysis of variance (ANOVA) was used to compare group variables, followed by Tukey post-hoc testing when indicated. One-way ANOVA with Games-Howell was performed for distributions where equal variances could not be assumed. Statistical significance was set at P < 0.05 for all tests. All data were analyzed by using SPSS software, version 13.0 (SPSS Inc, Chicago). All values are expressed as means±SD.

Role of the Sponsor: The funding agency had no role in the analysis or interpretation of the data or in the decision to submit the report for publication.