Neuropeptide Y (NPY) neurons in the hypothalamic arcuate nucleus (ARC) play an important role in feeding regulation. Plasma levels of ghrelin and insulin show reciprocal dynamics before and after meals. We hypothesized that ghrelin and insulin also exert reciprocal effects on ARC NPY neurons. Cytosolic Ca2+ concentration ([Ca2+]i) was measured by fura-2 microfluorometry in single neurons isolated from ARC of adult rats, followed by immunocytochemical identification of NPY neurons. Ghrelin at 10−10 M increased [Ca2+]i in isolated ARC neurons, and co-administration of insulin concentration-dependently suppressed the ghrelin-induced [Ca2+]i increases. Insulin at 10−16 M, 10−14 M, 10−12 M and 10−10 M counteracted ghrelin action in 26%, 41%, 61% and 53% of ghrelin-responsive neurons, respectively, showing a maximal effect at 10−12 M, the estimated postprandial concentration of insulin in the brain. The majority (>70%) of the ghrelin-activated insulin-inhibited neurons were shown to contain NPY. Double-immunohistochemistry revealed that 85% of NPY neurons in ARC express insulin receptors. These data demonstrate that insulin directly interacts with ARC NPY neurons and counteracts ghrelin action. Our results suggest that postprandial increase in plasma insulin/ghrelin ratio and insulin inhibition of ghrelin action on ARC NPY neurons cooperate to effectively inhibit the neuron activity and terminate feeding.

Ghrelin and insulin are, respectively, orexigenic and anorexigenic hormones regulating feeding behavior [1-3]. Furthermore, insulin and ghrelin regulate energy and glucose metabolism [4, 5]. Insulin and ghrelin are also implicated in learning/memory [6, 7], and insulin action is characteristically related to the Alzheimer disease [7]. All these functions are known to influence aging. In fact, insulin signaling regulates longevity, and ghrelin could promote longevity and serve as an anti-aging hormone [4, 8, 9, 10, 11]. These observations suggest that insulin, ghrelin and their interaction play an important role in regulation of feeding, metabolism and aging.

Prior to meal intake, plasma ghrelin level is elevated and plasma insulin level is low, while following meal intake, plasma ghrelin level decreases and plasma insulin level increases [12]. Accordingly, dramatic reciprocal changes of these hormone levels are produced, possibly contributing to initiation and termination of feeding behavior. Thus, ghrelin and insulin are reciprocally regulated at the level of release. In addition, we hypothesized that ghrelin and insulin could act reciprocally on the target neuron in the feeding center, to further promote the interplay of the two hormones in regulating feeding.

A large majority of neuropeptide Y (NPY) neurons in the hypothalamic arcuate nucleus (ARC) express the ghrelin receptor, growth hormone-secretagogue receptor (GHS-R) [13], and ghrelin directly interacts with and increases cytosolic Ca2+ concentration ([Ca2+]i) in the NPY neurons isolated from ARC [14]. It was shown that ghrelin also increases food intake via vagal afferent-mediated neural transmission to NPY neurons in ARC [15]. Thus, the principal mediator of orexigenic action of ghrelin is the ARC NPY neuron. On the other hand, anorexigenic effect of insulin could also involve the hyothalamic NPY. Inhibition of insulin receptor expression in the hypothalamus causes hyperphagia and increases fat mass [16]. Intracerebroventricular (ICV) injection of insulin inhibits the fasting-induced expression of NPY mRNA in the hypothalamus [17]. Insulin deficient type 1 diabetes exhibits increased expression of NPY and hyperphagia [18]. These reports suggest that the anorexigenic effect of insulin is mediated by inhibition of NPY neurons in the hypothalamus. However, direct effect of insulin on the ARC NPY neurons has not been evidenced. In the present study, we aimed to determine whether insulin directly interacts with ARC NPY neurons and counteracts the stimulatory action of ghrelin. We isolated single neurons from the ARC of rats aged 6 weeks when the feeding function largely matures, measured [Ca2+]i to monitor the neuronal activity, and observed direct effects of ghrelin and insulin on [Ca2+]i. Localization of the insulin receptor in NPY neurons of ARC was studied immunohistochemically. 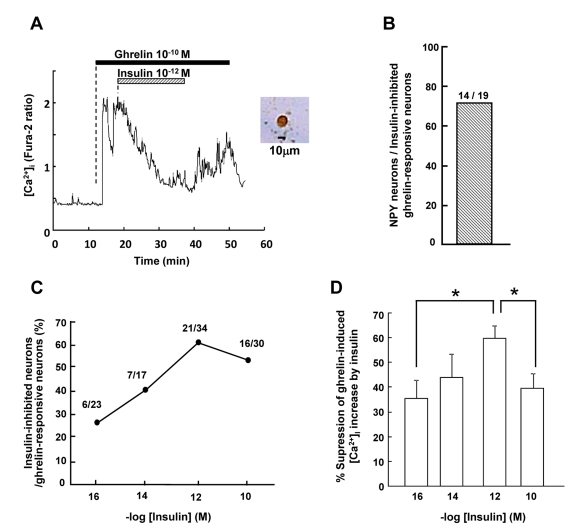 Localization of insulin receptor in NPY neurons of ARC

Insulin plays an important role in the central regulation of feeding and metabolism [3, 16], including its action via the hypothalamus to suppress hepatic glucose production [20]. Insulin enters the brain through the blood-brain barrier (BBB) [21]. However, the target neurons of insulin in the hypothalamus have not been fully clarified. ARC is considered the first order center that senses peripheral signals including hormones. Insulin deficient type 1 diabetes exhibits hyperphagia and is associated with increased expression of NPY in ARC [18]. Furthermore, type 2 diabetic Goto-Kakizaki (GK) rats with impaired insulin secretion and action also show hyperphagia and increased expression of NPY in ARC [22]. Hence, the ARC NPY neuron has been suggested as a candidate target for anorexigenic action of insulin. The present study demonstrated that insulin directly interacts with ARC NPY neurons and counteracts the ghrelin action to increase [Ca2+]i. Since the ghrelin-induced [Ca2+]i increase in ARC NPY neurons is coupled to stimulation of food intake [19], the insulin action to counteract ghrelin in ARC NPY neurons is suggested to be linked to inhibition of feeding. Regarding the insulin antagonism against ghrelin, insulin reportedly decreases preproghrelin mRNA expression in proGhrelin-expressing mHypoE-38 neuronal cell line [23].

It has been reported that the plasma insulin concentration increases to a level around 5 × 10−10 M after meals [12], and that the peripheral insulin enters the brain through BBB at a rate of 0.046 % [21]. From these reports, the insulin concentration in the brain after meals is estimated to be in a range of 10−13 M ~10−12 M. In the present study, 10−12 M insulin exerted a maximal effect on NPY neurons. Therefore, it is suggested that the inhibition of NPY neurons by insulin takes place most effectively following ingestion of food.

Ghrelin is the only one orexigenic hormone of the peripheral origin, whose plasma level is high before meals and falls after meals. In contrast, plasma level of anorexigenic insulin is low before meals and rises after meals. Thus, the plasma levels of these hormones change in a reciprocal manner. As an underlying mechanism, ghrelin inhibits insulin release from pancreatic islets [5, 24]. In addition to the reciprocal pattern of the plasma levels, the present study has demonstrated that these hormones reciprocally regulate their common target, ARC NPY neurons. It is suggested that at postprandial states, decreased ghrelin level, increased insulin level, and insulin action to counteract ghrelin-induced activation of NPY neurons work in concert to effectively inhibit the NPY neuron activity and terminate feeding.

We previously reported that leptin also suppresses 10−10 M ghrelin-induced [Ca2+]i increases in ARC NPY neurons in a concentration-dependent manner showing a maximal effect with 10−12 M leptin [19]. The estimated physiological concentration of leptin in the brain is around 10−12 M [19, 21]. Our present and previous data suggest that postprandial concentrations of insulin and leptin in the brain exert most efficient suppression of ARC NPY neurons, contributing to production of satiety.

In summary, this study demonstrates that insulin directly interacts with ARC NPY neurons and attenuates ghrelin-induced activation of ARC NPY neurons. It is suggested that postprandial increase in plasma insulin/ghrelin ratio and insulin inhibition of ghrelin action in ARC NPY neurons cooperate to effectively inhibit the neuron activity and terminate feeding behavior.

Male Sprague-Dawley rats aged 6 weeks were used in the experiments. Animals were maintained on a 12-h light/dark cycle and given conventional food and water ad libitum. Experimental procedures and care of animals were carried out according to the Jichi Medical School Institute of Animal Care and Use Committee.

Preparation of single neurons from ARC

Single neurons were prepared from the ARC following previous reports [14, 25]. Briefly, the whole ARC was dissected out and incubated with 20 units/ml papain (Sigma Chemical, St. Louis, MO), 1 mM cystein, 0.015 mg/ml deoxyribonuclease, and 0.75 mg/ml BSA for 15 min at 36 °C. The single neurons obtained were distributed onto coverslips and incubated in the humidified chamber at 30 °C for 30 min to 6 h until use.

[Ca2+]i was measured by radiometric fura-2 fluorescence imaging as previously reported [14, 26]. Briefly, single neurons on coverslips were incubated with 2 μmol/l fura-2/AM (Dojin chemical, Kumamoto, Japan) for 1 h at room temperature, mounted in chamber and superfused with HKRB at 1 ml/min at 33 °C. Fluorescence images due to excitation at 340 and 380 nm were captured and the ratio (F340/F380) images produced by an Argus-50 system (Hamamatsu Photonics, Hamamatsu, Japan).

When changes in ratio (F340/F380) took place within 5 min after administration of reagents and their amplitudes were more than 0.5 ratio unit, they were considered the responses. Regarding the suppression of ghrelin response by insulin, when insulin decreased the ghrelin-induced [Ca2+]i increase by 40% or greater, it was considered the suppression.

Immunocytochemistry for NPY in single neurons

Immunocytochemistry of NPY neurons were carried out as previously reported [14, 19]. Rabbit anti-NPY antibody (Diasorin, Srillwater, MN, 1:10000) was used for NPY staining. Correlation of [Ca2+]i and immunocytochemical data were performed by comparing the images of the phase-contact photographs of the cells subject to [Ca2+]i measurements and the immunocytochemical results.

Dual immunocytochemistry for NPY and insulin receptor in ARC

Colchicine (0.2 mg/15 μl) was ICV injected 1 day before the perfusion. Rat brains were perfused with 4 % parformaldehyde and embedded in paraffin wax. Five μm coronal sections of brain between −1.78 and −2.45 mm from bregma based on the structure of the Brain Maps [27] were cut using a microtome. To retrieve antigenicity, sections were heated by autoclave in 10 mM citrate buffer for 20 min [28]. Sections were immunostained according to standard procedures [26, 28]. Mouse monoclonal antibody against insulin receptor β-subunit (CHEMICON, CA, 1:100) and rabbit anti-NPY antibody (Diasorin, Srillwater, MN, 1:10000) were used as primary antibodies, and Alexa 488 labeled anti-mouse IgG and Alexa 594 labeled anti-rabbit IgG (Molecular probes CA, 1:500) were used as secondary antibodies, respectively. Fluorescence images were acquired with Olympus BX50 fluorescence microscope.