Vascular calcifications are frequent in chronic renal disease and are associated to significant cardiovascular morbidity and mortality. The long term predictive value of coronary artery calcifications detected by multi-layer spiral computed tomography for major cardiovascular events was evaluated in non-diabetic Caucasian patients on maintenance hemodialysis free of clinical cardiovascular disease. Two-hundred and five patients on maintenance hemodialysis were enrolled into this observational, prospective cohort study. Patients underwent a single cardiac multi-layer spiral computed tomography. Calcium load was quantified and patients grouped according to the Agatston score: group 1 (Agatston score: 0), group 2 (Agatston score 1-400), group 3 (Agatston score 401-1000) and group 4 (Agatston score >1000). Follow-up was longer than seven years. Primary endpoint was death from a major cardiovascular event. Actuarial survival was calculated separately in the four groups with Kaplan-Meier method. Patients who died from causes other than cardiovascular disease and transplanted patients were censored. The “log rank” test was employed to compare survival curves. One-hundred two patients (49.7%) died for a major cardiovascular event during the follow-up period. Seven-year actuarial survival was more than 90% for groups 1 and 2, but failed to about 50% for group 3 and to <10% for group 4. Hence, Agatston score >400 predicts a significantly higher cardiovascular mortality compared with Agatston score <400 (p<0.0001); furthermore, serum Parathyroid hormone levels > 300 pg/l were associated to a lower survival (p < 0.05). Extended coronary artery calcifications detected by cardiac multi-layer spiral computed tomography, strongly predicted long term cardiovascular mortality in non-diabetic Caucasian patients on maintenance hemodialysis. Moreover, it was not related to conventional indices of atherosclerosis, but to other non-traditional risk factors, as serum Parathyroid hormone levels. A full cost-benefit analysis is however necessary to justify a widespread use of cardiac multi-layer spiral computed tomography in clinical practice.

Dialysis patients exhibit an increased all-cause and cardiovascular (CV) mortality when compared to the general aging population [1]. In particular, with the increased aging of the population, calcification of vessels and cardiac valves is highly prevalent in maintenance hemodialysis (mHD) patients and has been associated with an increased CV risk as well as with all-cause mortality [2]. In patients with end stage renal disease (ESRD), besides traditional risk factors such as increased age, hypertension (HT), diabetes (DM) and dyslipidemia, non-traditional CV risk factors, such as mineral metabolism abnormalities, extreme PTH serum levels, excessive administration of calcium salts as phosphate binders, chronic inflammation, malnutrition and oxidative stress play an important role in development of CV diseases [3].

In previous studies, male gender, dialysis vintage, smoking, calcium-phosphate product, high serum high-sensitivity C reactive protein, low Kt/Vurea, Diabetes Mellitus and ethnicity were independent risk factors for CV calcifications [4,5]. Type 2 diabetic patients show an increased risk of CV events that is similar to the risk of non-diabetic patients with coronary artery disease [6], regardless of other concomitant CV risk factors [7]. Moreover, both type 1 and type 2 DM are frequently complicated by renal disease [8] and kidney disease in diabetic patients dramatically increases the incidence of CV events [9-12]. Therefore, renal disease must be considered an independent risk factor for CV disease at least as strong as DM. Indeed, regardless of DM, gender and ethnicity, incident HD patients show a CV morbidity/mortality increased by ten to one hundred times compared to the age-matched general population: CV disease-related mortality rate of a 25 to 35 year-old remic patient may be similar to that of people 85 or more years old [13].

Demographic, clinical features and laboratory findings of the study population divided on AS values <400 vs. >400 are summarized in Table 1. We selected 400 AS units as cut-off value according to previous literature [14].

Among the 205 mHD patients enrolled into the study, 72 (35.1%) showed an AS ≤ 400 units and 133 (64.9%) an AS >400 units. Age, HD-vintage, Kt/Vurea, C-reactive protein (CRP), serum haemoglobin (Hb), glucose, calcium, phosphorus and calcium-phosphorus product, fibrinogen, total cholesterol, HDL cholesterol and serum triglycerides did not differ significantly in patients with AS above or below 400. Statistically significantly higher values were found in patients with AS >400 units for BMI (p=0.039) (values less than 25 in both groups), serum intact parathyroid hormone (iPTH) (p=0.015) and serum LDL cholesterol (p=0.032) (values less than 100mg/dl in both groups), whereas serum albumin was statistically lower (p=0.043) in patients with AS >400 units but still above 4mg/dl.

Drug therapy for dyslipidemia and for the management of calcium/phosphorus metabolism of study population did not differ in patients with AS above or below 400 (NS) (Table 2).

Table 3A. Atherogenic indices values by Agatstone score in male

Table 3B. Atherogenic indices values by Agatstone score in female

One-hundred two patients (49.7%) had a CV event during the seven year follow-up period. Kaplan-Meier survival analysis is shown in Figure 1. Seven-year actuarial survival exceeded 90% among patients of groups 1 (AS=0) and 2 (AS≤400), but fell to about 50% in patients of group 3 (400 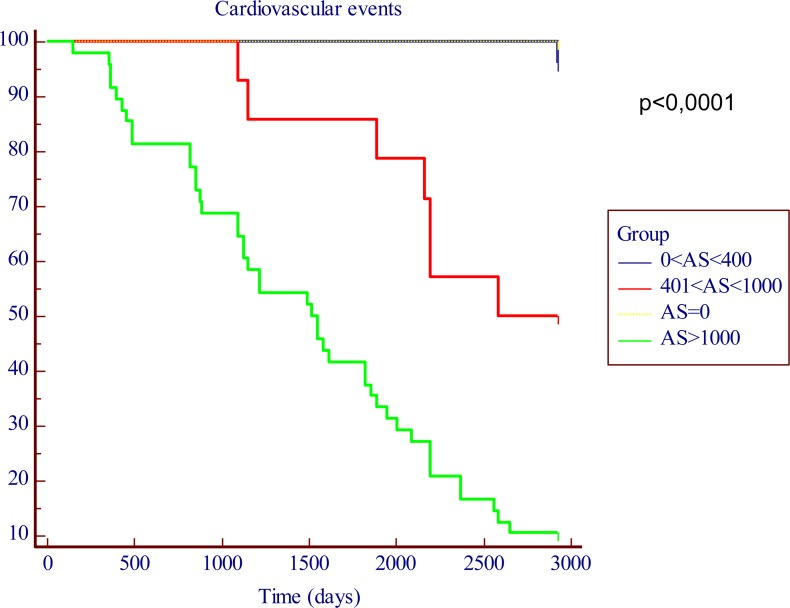 Figure 1. Kaplan-Meier in function of the AS cut-off levels. The time is expressed as days. 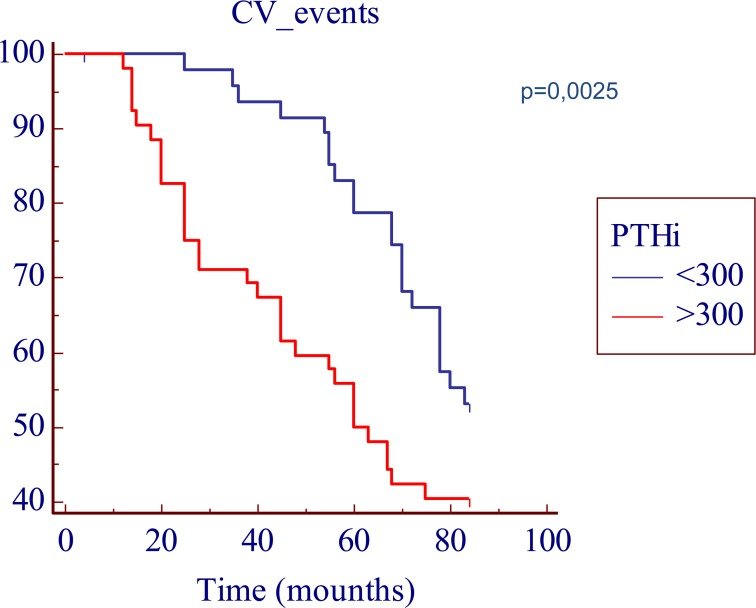 Figure 2. Kaplan-Meier survival plot in function of the iPTH cut-off levels. The time is expressed as months.

Nine out of the 205 patients enrolled into the study were censored: four died for non-CV causes and 5 underwent renal transplantation.

With the changing medical treatments and with the changes in the living environment, the age of the population is increasing in all countries, posing novel challenges to the medical and social areas [15-27]. While the changes related to increased age implies significant problems for the society, relevant modifications needs to be clarified for the physical, biological and mental health. This has fostered important research in distinct medical aspects, from the major role played by the telomers [28,29] to the study in different animal models, from bacteria, C. elegans to drosophila or mice where the cell autonomy and the underlying molecular pathways have been deeply investigated [30-39]. Recently it has become apparent that the complex genetic and epigenetic gene regulation in aging is also affected by a large array of microRNA [40-48], that contribute to the cellular signalling [49-58], which in turn regulate several cellular function, such as for example metabolism [59-64], cell division [65-66], or DNA damage [67-70]. A significant expansion of the latter is the involvement of p53 [71-76] and its family members p63 [77-79] and p73 [80-83] with their metabolic regulation. All these biochemical alterations, profoundly affect different organs, such as for example the neural [84-95] and the cardiovascular [96,97] systems. Accordingly, in the present manuscript we investigated a specific aspect of vascular biology.

Calcification of vessels and cardiac valves is highly prevalent in maintenance hemodialysis (mHD) patients and has been associated with an increased CV risk as well as with all-cause mortality [2].

Pathogenesis of vascular calcifications is complex. It does not only consist in a simple precipitation of calcium and phosphate, but is instead an active process in which vascular smooth muscle cells (VSMCs), undergo apoptosis and vesicles formation, are transformed into osteoblast-like cells, inducing both matrix formation and attracting local factors involved in the mineralization process [100].

Jono et al. suggested that elevated intracellular phosphate may directly stimulate VSMCs to transform into calcifying cells by activating genes associated with osteoblastic function [101]. Hyperfosfatemia is responsible for the enhanced number and activity of osteoclasts, being a major contributor to increased bone resorption in chronic kidney disease [102].

In the present prospective, cohort and long-term study we assessed CACS by using a semi-quantitative calcification score. In patients with CACS less than 400 AS units seven-year actuarial survival was very high (more than 90%) compared to patients with AS> 400. A striking increase in long term CV morbidity/mortality associated with the increase of baseline CACS was observed. Seven-year actuarial survival dropped to less than 10% in patients with extensive calcifications (AS>1000).

Other studies have addressed this issue using less invasive methodology to assess CV calcifications in both diabetic and non-diabetic mHD population [104]; in contrast with the results of previous studies, age, male gender, dialysis vintage, calcium-phosphate product, CRP serum levels, serum albumin, Kt/Vurea, were not independent risk factors for CACS in our non-diabetic study population, suggesting that the more accurate, semi-quantitative method used for measurement, the anatomic location and the exclusion of diabetic patients probably avoided confounding factors. Interestingly, “atherogenic indices” were not independent risk factors for CACS and LDL cholesterol was at target levels regardless to the extent of cardiac calcifications suggesting other factors to be important for CACS formation.

Our findings corroborate the well-known poor impact of traditional cardiovascular risk factor in non diabetic hemodialysis patients, and support that usual risk factors, as well as age, blood pressure and lipid levels are working with other factors, in particular iPTH levels, to contribute to the development and progression of vascular calcifications. It is worthy to note that higher serum iPTH levels are strongly associated with the presence of cardiac calcification, because a deregulated calcium-phosphorus is as important long term CV risk factor in non diabetic mHD patients and stress the importance of optimal calcium-phosphorus metabolism control in order to prevent or reduce the occurrence of CV events [105].

Although accurate MSCT is more invasive and the ionizing radiation dose is higher compared to roentgenography, it is likely that patients with higher iPTH and phosphorus levels could be suitable for screening and widespread clinical use in asymptomatic patients, may although provide additional information in situations in which a more accurate assessment of CV risk would be necessary.

This prospective and cohort study was designed specifically to evaluate CACS as a possible predictor of CV events in mHD patients with no evidence of cardiovascular disease. Patients recruited from five dialysis facilities, had coronary artery calcifications measured by multi-layer spiral computed tomography (MSCT). All of them were performed at our university centre. Clinical data, features of dialytic treatment and information on outcome were provided for each patient at regular six-month interval. Recruitment started in January 2003. Participants' clinical status was annually reviewed annually up to January 2011.

The study protocol complied with the declaration of Helsinki and was appointed by our local ethical committee and by ethical committee of each of the participating institutions. A written fully informed consent was provided by all patients before entering the study.

Men and women aged 18 years or more, on mHD since 6 months at least were considered eligible for the study.

Two-hundred five (105 male and 100 female) Caucasian mHD patients were enrolled into the study. At enrolment time each patients performed the coronary MSCT. Mean age was 59.85±12.77 years, HD vintage was 62.30±55 months.

Body mass index (BMI) was calculated upon the post-dialysis body weight (“dry weight”) at enrollment by dividing weight in kilograms by the square of height in meters for every patient.

Quantification of CACS was obtained with a coronary MSCT. The measurement of CACS was expressed in Agatston score (AS) units [111].

Calcium was scored according to the Agatston method to quantify the amount of calcification in the coronary arteries.

Coronary calcification was defined as the presence of four or more contiguous pixels with more than 130 Hounsfield units (HU). The investigator scored each of the 20 slices individually, using GE Medical Systems-Advantage Workstation software. Thereby, each plaque score was generated as the product of the area and density. This method has previously been described in detail by Agatston et al. [112,113]. According to the AS patients were then divided in four groups: group 1(AS=0), group 2 (0

Primary clinical endpoint was a fatal major CV event: death due to myocardial infarction (MI), heart failure or other CV causes (aortic aneurysm rupture, stroke, i.e.) during the 7 year follow-up period following baseline evaluation. Clinical outcome was assessed by direct interview contact to the patients and inspection of medical or other records.

Seven-year actuarial survival was calculated in the four groups separately by Kaplan-Meier method. The “log rank” test was employed to compare survival curves. Patients who died for causes other than CV diseases and transplanted patients were censored. To study the linear relationship between i-PTH levels and AS values, non parametric correlation (Spearman p) was used. Data were elaborated through the MedCalc Statistical Software (MedCalc Software, 9030 Mariakerke, Belgium).