Copyright: © 2022 Kearney et al. This is an open access article distributed under the terms of the Creative Commons Attribution License (CC BY 3.0), which permits unrestricted use, distribution, and reproduction in any medium, provided the original author and source are credited.

Cancers depend on one or more ubiquitously activated oncogenes to survive and maintain their tumorigenic phenotype. The MYC oncogene is critically important in a variety of hematological malignancies, including Burkitt's lymphoma, acute lymphoblastic leukemia, and multiple myeloma. Cancers' reliance on few oncogenes, aptly termed oncogene addiction, presents an exploitable vulnerability. Indeed, targeted therapies inhibiting key oncogenes in a multitude of cancer types are routinely used in clinic [1]. However, in many cases cancers either do not respond to oncogene inhibition therapies or eventually become resistant following an initial response phase. Resistance to oncogene inhibition therapies and ensuing tumor recurrence are major contributors to cancer-specific mortality.

Experimental model systems of MYC oncogene inactivation in various cancers have revealed molecular mechanisms of oncogene addiction, escape from oncogene dependence resulting in tumor recurrence [2]. Inactivation of the MYC oncogene in mouse models of cancer induces proliferative arrest, apoptosis and/or cellular senescence, as well as the shutdown of angiogenesis; thereby, enabling tumor clearance and sustained tumor regression [3, 4]. However, in some cases, tumors reoccur [5].

Recently, we gained insight into the mechanism of tumor recurrence. We found that when either of two tumor suppressor genes, ARF or p53, is lost or mutated, tumor recurrence rapidly always occurs [6]. We previously reported that p53 loss results in tumor recurrence by maintaining tumor vasculature, despite MYC inactivation, through upregulation of angiogenesis inhibitor TSP1 [3]. Further, we have described that INK4A/ARF loss or RB1 loss results in tumor recurrence through abrogation of cellular senescence. We found distinct mechanisms through which loss of ARF or p53 leads to tumor recurrence in a mouse model of T-ALL [6]. We identified that ARF has a p53-independent effect on the ability of MYC inactivation to elicit expression of genes involved innate immune activation associated with a marked decrease in the recruitment of macrophages.

p53-dependent and p53-independent effects of ARF

We found that ARF loss prevented MYC inactivation from inducing cellular senescence through a p53 independent mechanism [6]. Our observations are consistent with a prior study that ARF regulates cellular senescence in p53-independent manner in melanoma [7]. Further, we found that ARF loss, but not p53 loss, blocked macrophage infiltration into regressing tumors. In contrast, loss of p53 had modest effect on cellular senescence and no effect on macrophage infiltration, but instead allowed maintenance of tumor vasculature, even in regressing tumors. Thus, the loss of either ARF or p53 enables tumor recurrence, albeit through different mechanisms. Therefore, ARF's effects on angiogenesis are likely to be p53-dependent, while ARF's effects on senescence and innate immune infiltration and activation seem to be p53-independent (Figure 1). 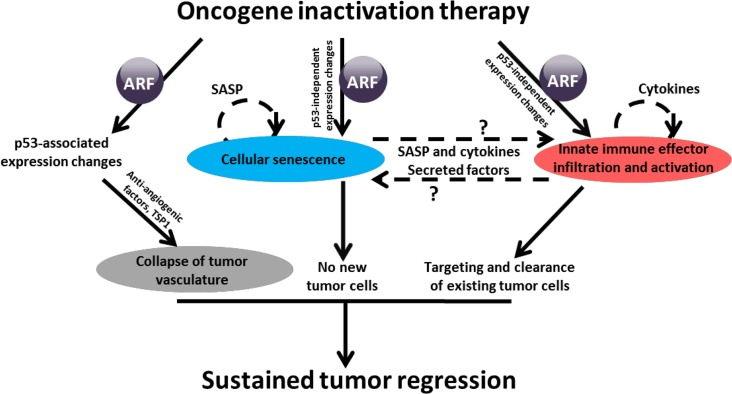 Figure 1. ARF loss interferes with expression of genes associated with senescence and innate immune system. MYC inactivation, in the presence of ARF, triggers gene expression changes in pathways associated with senescence as well as macrophage and innate immune cell activation and infiltration. Microarray analysis revealed that ARF loss precludes these changes, which we propose may be how ARF loss blocks macrophage infiltration. SASP: Senescence-associated secretory phenotype.

The mechanism through which ARF regulates innate immunity is not clear. Analysis of gene expression revealed a signature of genes involved in innate immunity [6]. ARF, itself, is not thought to be directly a transcription factor, but is known to interact with or regulate transcription factors, such as MYC and p53 [8-10]. We considered ARF may be diminishing MYC's transactivation or transrepression capabilities; however, analysis of MYC target genes did not support this [6].

Emerging immunotherapies have intensified interest in the therapeutic role of the innate and adaptive immune system. Biologics targeted at tumor cells for enabling antibody-dependent cell-mediated cytoxicity (ADCC) rely on innate immune system for elimination of cancer cells [11]. Since ARF loss in tumors influences infiltration and activation of innate immune effectors, ARF status may be important to immunotherapies. In particular, this may be relevant for drugs that utilize ADCC, such as anti-ERBB2 antibody trastuzumab and anti-CD20 antibody rituximab.

Cells undergoing senescence secrete factors that bolster the senescent phenotype in both autocrine and paracrine fashion by engaging innate immune system [12]. ARF loss is associated with expression changes in senescence and innate immune system-related genes as well as defects in macrophage infiltration into tumors. Our results are consistent with a previous report that ARF deficiency interferes with macrophage activation, cytokine production, and inflammation [13]. Conceivably, ARF null tumors may present a different secretome profile, which may abrogate SASP-dependent autocrine and paracrine positive feedback loops and elicit incomplete targeting and clearance of tumor cells by immune effectors. We have yet to identify an individual factor that may mediate effects of ARF on innate immune system; however, likely candidates include TGFbeta, IL-1alpha/beta, and NFkB among others. TGFbeta and pro-inflammatory cytokine IL-1 have been previously implicated in the reinforcement and spread of senescence [14, 15]. Transactivation activity of NFkB, common regulator of SASP and innate immunity, is intriguingly altered by ARF [16, 17]; however, whether ARF loss alters SASP and cytokine and chemokine profiles in T-ALL is not known.

Our research has uncovered ARF as a common regulator of senescence and tumor clearance that appears to require the innate immune system. However, there are several questions awaiting answers. First, we have identified innate immune-related gene expression changes due to ARF loss; yet direct causality of these changes in macrophage infiltration into regressing tumors has not been established. Second, the mechanism by which cellular senescence is dependent upon macrophage recruitment is unclear. Third, whether ARF loss in tumors affects other immune infiltrates, such as NK cells, monocytic and granulocytic myeloid cells, or even adaptive immune cells, needs to be investigated. Fourth whether ARF's effect on innate immune-related genes and recruitment of macrophages extends to other types of cancers remains to be determined. Finally, it is of paramount interest whether ARF status may influence efficacy of immunotherapies.

The authors declare no conflict of interest.