Life history theory postulates a trade-off between development and maintenance. This trade-off is observed when comparing life histories of different animal species. In humans, however, it is debated if variation in longevity is explained by differences in developmental traits. Observational studies found a trade-off between early and high fecundity and longevity in women. Development encompasses more than fecundity and also concerns growth and physical performance. Here, we show a life history trade-off between early and above average physical performance and longevity in male Olympic athletes. Athletes who peaked at an earlier age showed 17-percent increased mortality rates (95% CI 8-26% per SD, p<0.001) and athletes who ranked higher showed 11-percent increased mortality rates (95% CI 1-22% per SD, p=0.025). Male athletes who had both an early and extraordinary peak performance suffered a 4.7-year longevity cost. (95% CI 2.1-7.5 years, p=0.001). This is the first time a life history trade-off between physical performance and longevity has been found in humans. This finding deepens our understanding of early developmental influences on the variation of longevity in humans.

Generalized life history theory postulates a trade-off between development and maintenance explaining the considerable variation of traits like age at maturation, age at first reproductive event, number of offspring, size and lifespan across and within species [1–3]. It is debated whether the variation in human lifespan can also be explained by such trade-offs. Observational studies in women have shown early and above average fecundity to come at a cost of longevity [4–8]. The life history of men has no distinct mark of the end of development as menarche in women, but negative correlations between number of offspring and life-span after age 50 have also been reported for males [7,8]. This could be explained as males invest more in physical strength and growth, which is associated with attractiveness and dominance, two traits important for male fitness [9,10].

We used a unique historical cohort of 1055 Olympic track and field athletes from 41 different nationalities from the Olympic Games from 1896 through 1936 [13]. Track and field is a large group of similar sports for individual performance where the results are measured on a continuous scale. Technological advancements contribute only little to basic body functions like running, throwing and jumping, which are critically dependent on physical strength and coordination. Athletic games are therefore an ideal group of sports to use in this study. Of these Olympic athletes 958 were men and 97 women, competing in 58 disciplines. Most historical athletes competed in several disciplines and therefore we had information on 2320 personal records. Mean age at personal record was 24.9 years (SD 3.8). The year of birth ranged between 1864 and 1913, and the year of death ranged between 1901 and 2010. Mean age at death was 72.1 years (SD 16.9). (See Supplementary Information)

Figure 1 presents outcomes of various additional analyses. First, we analyzed males and females separately. Because of the small number of women in the early Olympic Games under study here, the risk estimates for women have very wide confidence intervals, but were not significantly different from men. Second, to exclude the influence of accidental causes of mortality directly related to professional sports, we analyzed survival from age 50 onwards. The outcomes did not differ. Third, instead of compiling their multiple personal records, we only analyzed the personal record in the athlete’s primary discipline, the highest ranking discipline, which provided similar outcomes. Fourth, we performed analyses in which we standardized the personal records not per Olympic discipline but per cardiovascular intensity category as classified by the American college of cardiology, and per category as classified by the IAAF as we have done earlier [14–16]. The estimates were unaffected. Finally, we considered whether the outcomes could have been influenced by any kind of performance enhancing drugs. The first doping that was proven effective was developed in 1935; we therefore assumed that before that year an effect of doping was excluded [17,18] Using the 92% of the observations that were achieved before 1935 yielded similar results (Figure 1). It is important to note that cocaine was available since the first Olympic games and could have played a role in the association. 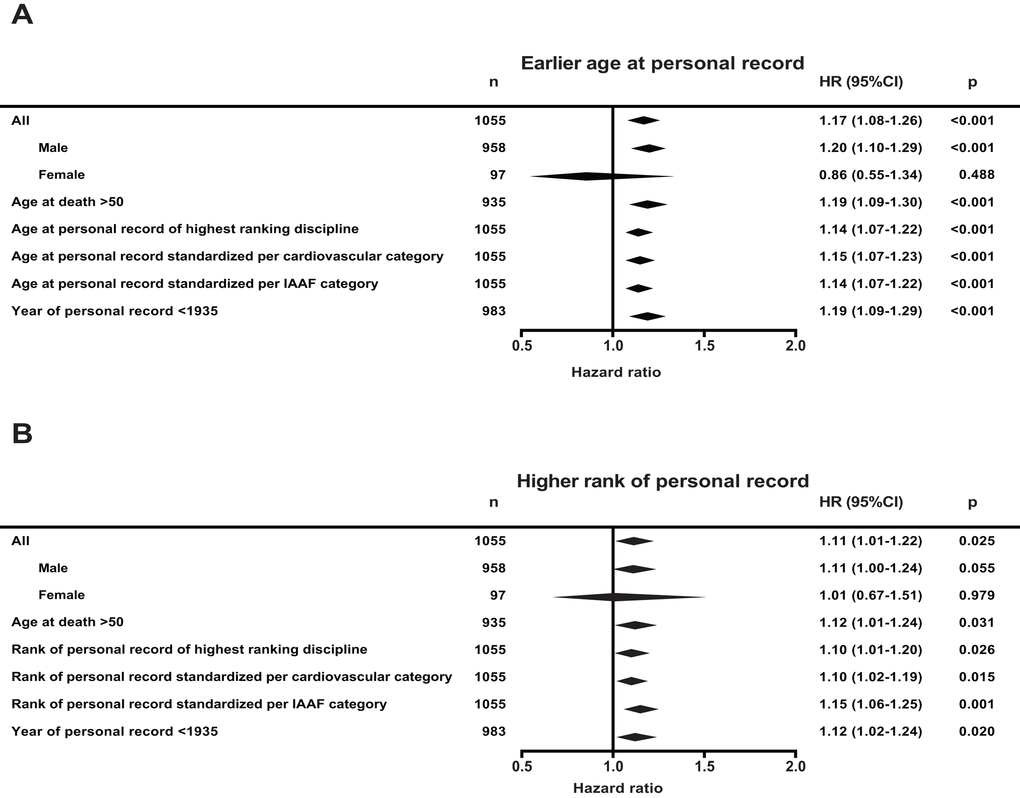 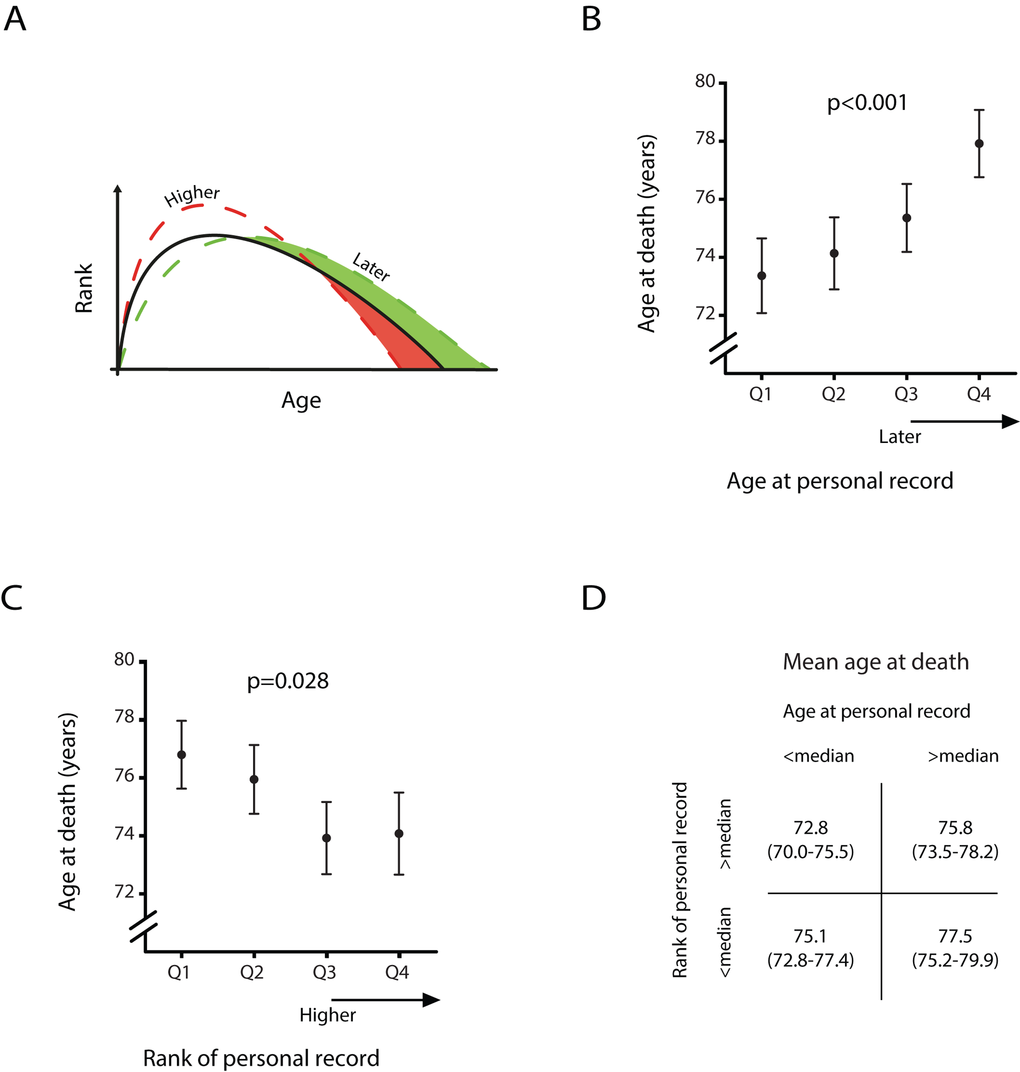 Several factors have to be considered when interpreting the present findings. First, differences in socioeconomic status could have distorted the observations as wealthier athletes may have had better training and therefore gained better personal records at an earlier age. An affluent environment during development is not only likely to contribute to earlier and better physical performance, wealthy people on average live longer than poor people. We did not have information on the socioeconomic position of the athletes, but differences are unlikely to explain for the observed trade-off, for they would have worked in the opposite direction and, if anything, they may have masked the associations and any true biological relation would even be stronger. We also had no information on the height of athletes.

Early cessation of training and competition of individual athletes could have resulted in an underestimation of the age, and the rank of the personal record. Personal records however, have been recorded not only at the Olympic Games but also at every other official competition, and we assumed that all athletes were determined to maximize their performance over a prolonged period and would only stop prematurely in rare instances. Even if early cessation was frequent, it would have weakened the observed association between peak performance and age at death and again, any true relation would be stronger than we observed here.

According to expectation, we observed a gradual increase in life expectancy of athletes from later birth cohorts (data not shown). Moreover, a recent year of birth was also related to a better personal record at an earlier age. This ongoing professionalization of sports thus masked the observed trade-off; we therefore adjusted for birth cohort.

It is difficult to interpret the outcomes among women. One possibility is that there is a sex dimorphism and the effect is smaller in women, but we were not able to study this properly because of the relatively small number of female athletes. The alternative is that the variance is greater but the effect size is not different. It has already been shown that early sexual maturation and high fertility of females, which can also be considered a peak physical performance, come at a longevity cost [4–6]. Especially under adverse environmental conditions, the average lifespan of fertile women is reduced by fatal consequences of pregnancy and childbirth. Moreover, experimental models and observations in humans also provide evidence that increases in fecundity come with a longevity cost [7,8,20,21].

Whereas previous studies on the cost of sexual development and success could only reliably be estimated in women, we here show for the first time that early and extraordinary peaks in physical performance trades off at longevity in men. Physical excellence and sports may have a direct cost due to intense training and fierce competition, especially when there is a high risk of bodily collision or levels of physical contact [16]. It is less likely that these direct costs explain the observed trade-off between early and extraordinary physical performance and longevity, since we showed a similar trade off when analyzing residual life expectancy from age 50. This finding supports the idea that early and extraordinary peak performance comes with a higher pace of ageing [22,23]. It is tempting to speculate about the underlying biological mechanisms of this developmental constraint. Some have suggested that growth and subsequently, larger size, result in a body which costs more energy to maintain, explaining the higher pace of ageing [24,25]. The mTOR pathway, which regulates growth in early life and pace of ageing in late life, is a potential molecular pathway that can explain for the observed trade off [26–28]. Others have suggested that hormonal regulation of development and maintenance could play a role, as has been observed for the GH-IGF signaling pathway explaining the size-life span trade off in domestic dogs, and the muscle mass-immune competence trade-off mediated by testosterone observed in primates and other species [10,29–32]. All mechanistic explanations are plausible and it needs to be studied which pathways are causal, and at which we can intervene to secure longer and healthier lives.

This study is an observational cohort study to investigate the effect of the age at, and relative rank of personal record on age at death in Olympic track and field athletes.

Data on year of birth, year of death, discipline, year of personal record, performance score of personal record and nationality were retrieved from the continuously updated and most comprehensive online database on Olympic athletes: Sports Reference database, in April 2014 [13]. We used this database previously to determine the difference in mortality between disciplines with different cardiovascular intensity [16]. We included all Olympic track and field athletes with a known personal record. This group consisted of 3671 athletes. First, we excluded 2274 athletes who were born after 1913 to ensure that we had a cohort of individuals with a complete life history. Second, we excluded 126 athletes with an unknown date of birth and 216 athletes with an unknown age of death. In an additional analysis, we excluded athletes who died before age 50 (N=120), to minimize the effect of survival bias and extrinsic or accidental causes of mortality. For one of the analyses, we excluded all personal records set after the year 1935, effectively before the effective doping became available. Recording of personal records was not bound to the Olympic Games and also include every official competition, excluding trainings.

The track and field category consisted of 58 disciplines. In the throwing and jumping disciplines we used distance as a measure, in the running disciplines we converted time over a fixed distance to average speed for reasons of comparison, and in the pentathlon and decathlon we used the number of points. Variation in the number of points in the pentathlon and decathlon was high enough to be a good reflection of the athlete’s performance.

The performance score of personal record was average speed (m s-1) for the running or walking disciplines, distance (m) for the throwing and jumping disciplines or number of points for the pentathlon and decathlon.

When categorizing the various disciplines per cardiovascular intensity category we used the classification of sports published in the Journal of American college of cardiology, as we have used before [15,16]. In the analysis where we grouped multiple disciplines according to the International Association of Athletics Federation (IAAF) classification before standardization, we categorized the disciplines in a short, middle, long, jumping and throwing category [14].

The authors declare that they have no competing financial interests.