Copyright: Li et al. This is an open-access article distributed under the terms of the Creative Commons Attribution License (CC BY 3.0), which permits unrestricted use, distribution, and reproduction in any medium, provided the original author and source are credited.

The majority of tea studies have relied on neuropsychological measures, and much fewer on neuroimaging measures, especially for interregional connections. To date, there has been no exploration of the effect of tea on system-level brain networks. We recruited healthy older participants to two groups according to their history of tea drinking frequency and investigated both functional and structural networks to reveal the role of tea drinking on brain organization. The results showed that tea drinking gave rise to the more efficient structural organization, but had no significant beneficial effect on the global functional organization. The suppression of hemispheric asymmetry in the structural connectivity network was observed as a result of tea drinking. We did not observe any significant effects of tea drinking on the hemispheric asymmetry of the functional connectivity network. In addition, functional connectivity strength within the default mode network (DMN) was greater for the tea-drinking group, and coexistence of increasing and decreasing connective strengths was observed in the structural connectivity of the DMN. Our study offers the first evidence of the positive contribution of tea drinking to brain structure and suggests a protective effect on age-related decline in brain organisation.

Tea has been a popular beverage since antiquity, with records referring to consumption dating back to the dynasty of Shen Nong (approximately 2700 BC) in China [1]. Tea is consumed in diverse ways, with brewed tea and products with a tea ingredient extremely prevalent in Asia, especially in China and Japan. It also is more fashionable than ever in western countries. A growing literature has demonstrated that tea intake is beneficial to human health, including mood improvement (e.g., anti-stress) [2–4], risk reduction of cognitive decline [5–8], cardiovascular disease prevention [9], lower cancer incidence [10, 11], reduced mortality [12, 13]. These benefits of tea are derived primarily from the effects of its constituents: catechin, L-theanine, and caffeine. In both animal and human studies [14–16], catechin has been found to be beneficial to cognitive health, showing enhancements in memory recognition and working memory performance compared to the intake of placebo [14]. Kimura et al. discovered that L-theanine plays a positive role in anti-stress by reducing stress-induced heart rate and salivary immunoglobulin A (s-lgA) during a stressed mental arithmetic task [3]. The beneficial effect of caffeine on cognitive functioning was reported at least two decades ago [17] and replicated by recent studies [18, 19]. Although individual constituents of tea have been related to the roles of maintaining cognitive abilities and preventing cognitive decline, a study with behavioural and neurophysiological measures showed that there was a degraded effect or no effect when a constituent was administered alone and a significant effect was observed only when constituents were combined [20]. The superior effect of the constituent combination was also demonstrated in a comparative experiment [21] that suggested that tea itself should be administered instead of tea extracts; a review of tea effects on the prevention of Alzheimer’s disease (AD) [22], found that the neuroprotective role of herbal tea was apparent in eight out of nine studies.

It is worth noting that the majority of studies thus far have evaluated tea effects from the perspective of neurocognitive and neuropsychological measures, with direct measurement of brain structure or function less-well represented in the extant literature (see a recent summary in [23]). In a double-blind, placebo-controlled, crossover study with near-infrared spectroscopy measure, cerebral blood flow in the frontal cortex was reduced by oral tea administration [24]. This change of regional brain activity was also observed by EEG in a study, showing that higher theta, alpha, and beta oscillations were associated with tea consumption in the frontal and medial frontal gyri [25]. These studies focusing on brain regional alterations did not ascertain tea effects on interregional interactions at the level of the entire brain.

Graph theoretical analysis is a suitable and effective tool to gain insights into brain interregional interactions and has been widely utilized in diverse investigations involving both patients and healthy people [26–28]. To date, only two published papers have investigated the association between functional connectivity and tea compounds in only a few task-related regions selected a priori [29, 30], leaving the large-scale networks of the brain unexplored.

Demographic information is listed in Table 1. There was no significant difference between the tea-drinking and the non-tea drinking groups in age (t34=0.92, p>0.05) and years of education (t34=0.95, p>0.05) using a two-tailed, two-sample t-test. A Chi-square test did not demonstrate any significant differences between the groups in the ratio of male to female participants (χ2(1)=1.85, p>0.05), or the ratio of left-handedness to right-handedness (χ2(1)=0.73, p>0.05). Coffee consumption was not significantly different between the groups (t34=-0.48, p>0.05). In the comparisons of neuropsychological and cognitive measures, one out of 12 measures were significantly different between the tea-drinking and the non-tea drinking groups according to the permutation test (see Figure 1). Higher performance was observed for the tea-drinking group in the Block Design test (corrected p=0.042).

Table 1. Demographic information of participants in this study. 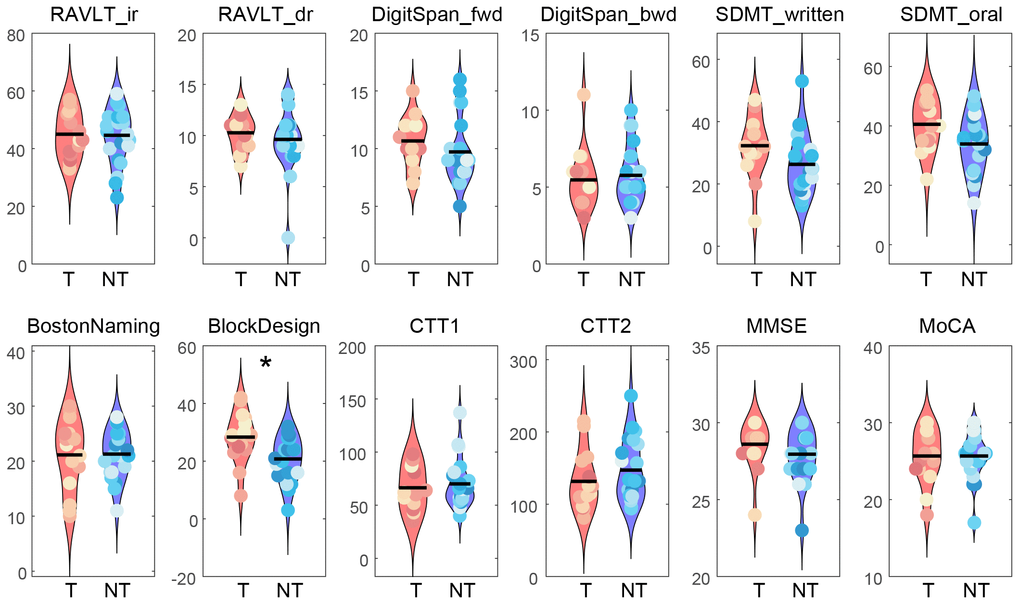 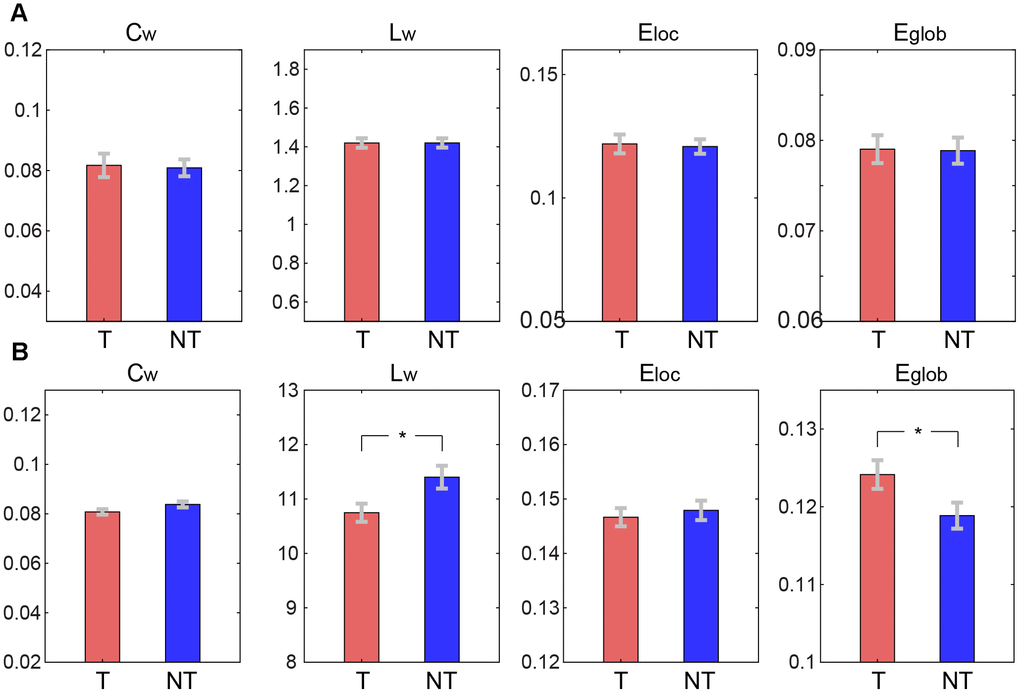 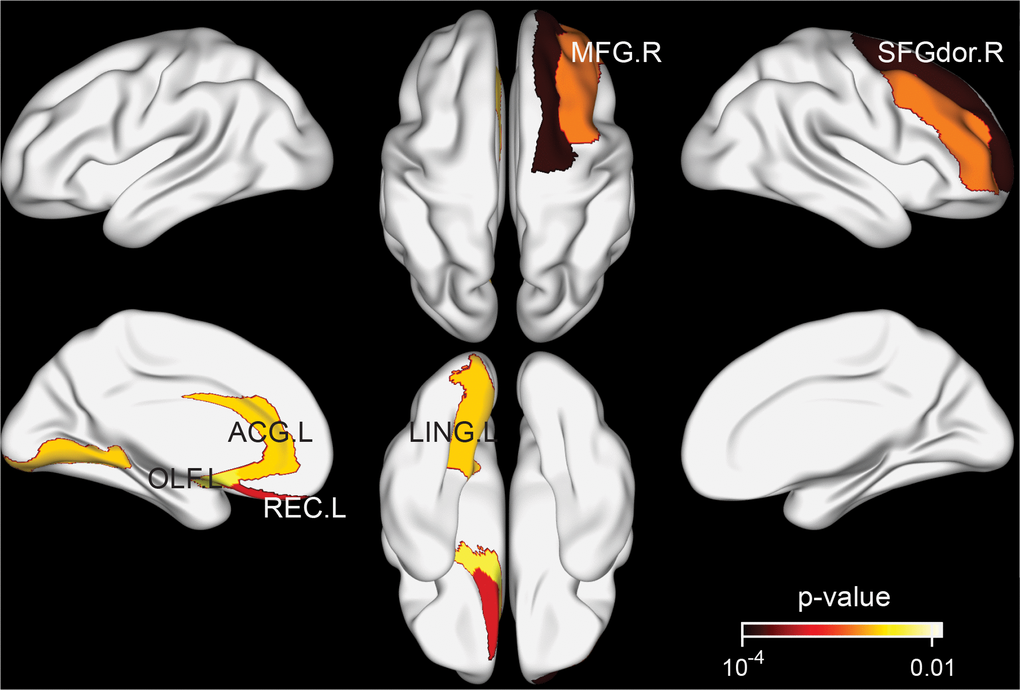 The comparisons of hemispheric asymmetries of global graph theoretical metrics between the tea-drinking group and the non-tea drinking group are illustrated in Figure 4. Hemispheric asymmetries in Cw and Eloc were significantly different between the groups in the structural network (both, corrected p=0.018), exhibiting greater asymmetry between hemispheres in the non-tea drinking group. Both Lw and Eglob in the structural network and all metrics in the functional network were not significant in terms of asymmetry. 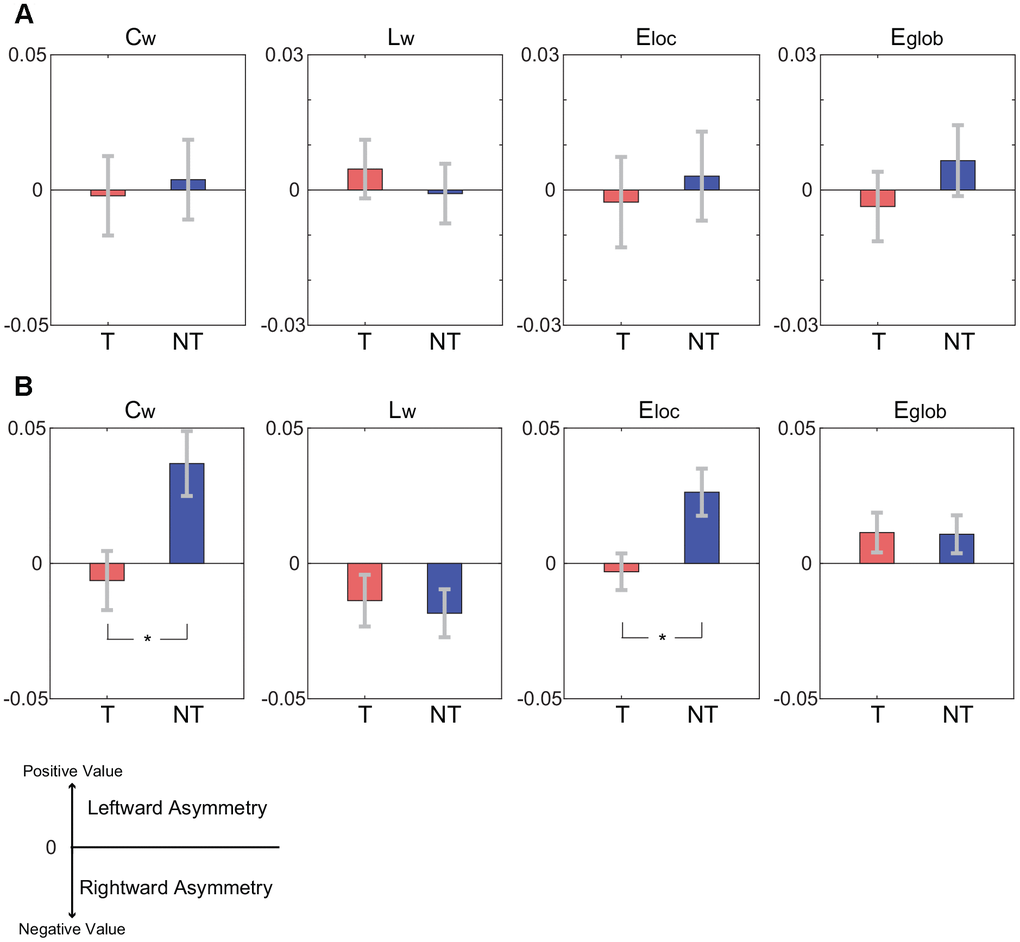 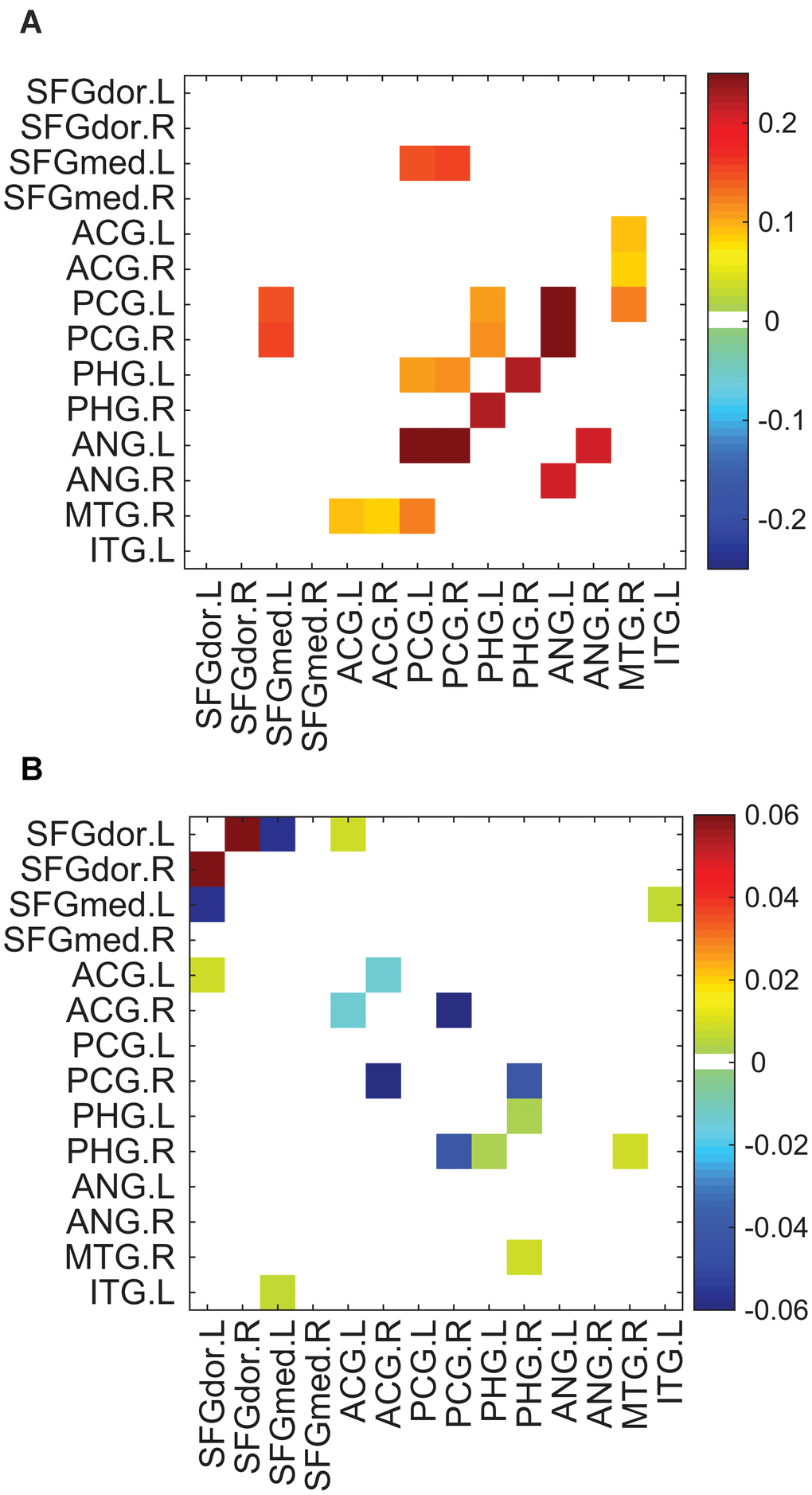 A large number of studies have suggested that the reduction of interregional connectivity is associated with brain ageing by means of diverse data analytics such as seed-based connectivity, predefined regions interconnections, and tractographic connectivity [34–39], which implies that a slower ageing brain should retain more connections between regions and milder disruption in connectivity resulting in higher efficiency for communications and information exchange between regions. Here, higher structural network efficiency was found in older adults who had habitual tea drinking. Relative to the non-tea drinking group, the tea drinking group had less topological distance between brain regions and more efficient interregional connectivity. This supports the hypothesis that the positive effects of habitual tea drinking are exerted on brain organization by preventing interregional connections from becoming disrupted. In addition to the significant effect of tea drinking on whole brain organization, a regional effect was also observed in this study, showing that tea intake resulted in higher nodal efficiency. The majority of these regions reside in the frontal cortex, which is in agreement with the previous finding that the frontal region is involved in age-related alterations of structural connectivity [34].

Other substances might interfere with the outcome of the effect of tea drinking on brain connectivity. Coffee is one of the beverages that affect outcomes as it contains caffeine that is also one of the main active constituents of tea. However, coffee consumption between the tea-drinking group and the non-tea drinking group was not significantly different between the groups. Although there were no significant differences in demographic factors, environmental factors could have a confounding effect on brain network properties. For the nature of exploratory purpose, p-values were not corrected in the comparisons of regional properties between the tea drinking and non-tea drinking groups. Therefore, some of detected regions or connections may have occurred by chance. The results of regional properties provide heuristic information for further studies.

In summary, our study comprehensively investigated the effects of tea drinking on brain connectivity at both global and regional scales using multi-modal imaging data (i.e., functional and structural imaging) and provided the first compelling evidence that tea drinking positively contributes to brain structure making network organization more efficient. Our study suggests that tea drinking is effective in preventing (slowing) or ameliorating cognitive decline and that tea drinking might be a simple lifestyle choice that benefits brain health.

Older participants were recruited from residential communities in Singapore by door-to-door visits. Trained research nurses and psychologists assessed participants to exclude those who had one or more conditions including dementia (Clinical Dementia Rating (CDR) global score>0), terminal illness, stroke, aphasia, marked hearing impairment, or any psychiatric or psychological problems. A set of neuropsychological and cognitive measures comprising the Rey Auditory Verbal Learning Test (RAVLT) [53], the Digit Span and Block Design tests from the Wechsler Adults Intelligence Scale (WAIS-III) [54], the Symbol Digit Modalities Test (SDMT) [55], the Boston Naming Test [56], the Color Trials Test 1 & 2 (CTT1 & CTT2) [57], the Singapore modified Mini-Mental State Examination (MMSE) [58, 59], and the Montreal Cognitive Assessment (MoCA) [60] were administered to participants. In this first wave of recruitment, a total of 93 participants attended the assessment and were subsequently recruited to a separate randomized controlled intervention trial in Singapore [61].

The protocol was reviewed and approved by the Institutional Review Board of the National University of Singapore. Written, informed consent to participate in the study was provided by participants after they were given detailed information on the study.

Functional MRI was preprocessed by initially excluding the first ten volumes, followed by slice timing correction, head motion correction, local of the parenchyma, signal regression (including regressors of 24 head-motion parameters, and time-series in cerebrospinal fluid and white matter), spatial normalization to the Montreal Neurological Institute (MNI) space using the T1-weighted image, spatial smoothing with a 4.5-mm full width half-maximum Gaussian kernel, and temporal band-pass filtering (0.01 Hz ~ 0.1 Hz) to mitigate the effects of low frequency drift and high frequency physiological noise. To eliminate the interference of large head motions, participants were excluded if the maximal inter-scan motion exceeded 2 mm translation or 2 degrees rotation in any direction or the average frame-wise displacement (FD) exceeded 1 mm in the residual effect of head motion, according to the root mean square of FD [62]. With these criteria, no participant was excluded. Preprocessing was carried out using the statistical parametric mapping (SPM12 http://www.fil.ion.ucl.ac.uk/spm/software/spm12/), resting-state fMRI data analysis toolkit (REST) [63], and data processing assistant for resting-state fMRI (DPARSF) [64].

Diffusion-weighted images were realigned and corrected for head motion and eddy current distortions [62]. A diffusion tensor was fitted to each voxel within the brain parenchyma. A widely used deterministic streamline tracking algorithm was then utilized to identify white matter tracts, with the tracking starting from the deep white matter regions and terminating at a voxel either due to a turning angle >45º or a fractional anisotropy <0.15. The preprocessing of diffusion-weighted images was performed using the functional magnetic resonance imaging of the brain (FMRIB) Software Library in Version 5.0 (FSL, [65]), diffusion toolkit [66], and PANDA [67].

To remove spurious connections from functional networks, a sparsity threshold was applied to only retain the connections with connective strengths above the threshold. Since there is no definitive method to determine the sparsity threshold [73], we calculated each network metric for the entire network (size: 90×90) at a series of thresholds ranging from 0.1 to 0.4 with an incremental step of 0.01, and then took the integral over these values to obtain a final quantity that was tested for between-group differences.

All statistical evaluations in this study were performed by non-parametric permutation tests [75] unless otherwise stated. Specifically, the null hypothesis was that there was no difference in a variable between the tea-drinking group and the non-tea drinking group. P-values were obtained from null distributions estimated from 10,000 permutations of group labels. The threshold for significance was set a p<0.05 after the false discovery rate (FDR) correction (adopted the Benjamini and Hochberg procedure [76]) for the comparisons of global properties and neuropsychological measures. P-values were not corrected in the comparisons of regional properties for the exploratory purposes.

We declare that the funders had no role in study design, implementation and data analysis, decision to publish, or preparation for the manuscript. The protocol was reviewed and approved by the Institutional Review Board of the National University of Singapore. Written, informed consent to participate in the study was provided by participants after they were given detailed information on the study. All authors have no conflict of interest to report.