Copyright © 2019 Wang et al. This is an open-access article distributed under the terms of the Creative Commons Attribution License (CC BY 3.0), which permits unrestricted use, distribution, and reproduction in any medium, provided the original author and source are credited.

COPD is a common cause of death in the whole world [1], and the incidence of COPD continue to increase [2]. Respiratory tract infections are a common trigger of COPD exacerbations, and are associated with increased rates of morbidity and mortality. For COPD patients, inhaled corticosteroid (ICS) treatment is important maintenance therapy, and the combination of inhaled long-acting β2-agonists (LABAs) and ICSs can effectively reduce the risk of exacerbations among COPD patients [3–7]. In addition to the clinical benefits of ICSs, the use of ICSs can increase the risk of pneumonia – a common precursor of sepsis in patients with COPD [8–12]. Moreover, COPD patients with sepsis had a higher risk of severe exacerbations, pneumonia, and death compared to those without sepsis [22]. Despite most previous studies have focused on the association between ICSs and pneumonia or serious pneumonia, only a few have investigated the association between ICS treatment and the risk of sepsis [13]. In contrast to the significant association between ICS and the risk of pneumonia, one large-cohort study [13] using the administrative health databases showed that the risk of sepsis is not increased with ICS among patients treated for COPD. Therefore, the association between ICS used and sepsis risk remains unclear, and further study is warranted to clarify this issue.

Characteristics of the study population

Initially, a total of 17,111 patients had the diagnosis of COPD and received a fixed ICS/LABA combination (10,267 patients with fluticasone/salmeterol and 6,844 patients with budesonide/formoterol) were identified after excluding those with previous sepsis. Then, pairwise matching (1:1) resulted in two similar subgroups, with 6,688 patients in each (Figure 1). After propensity score matching, no significant difference was found between the patients who received fluticasone/salmeterol and those who received budesonide/formoterol for all covariates. 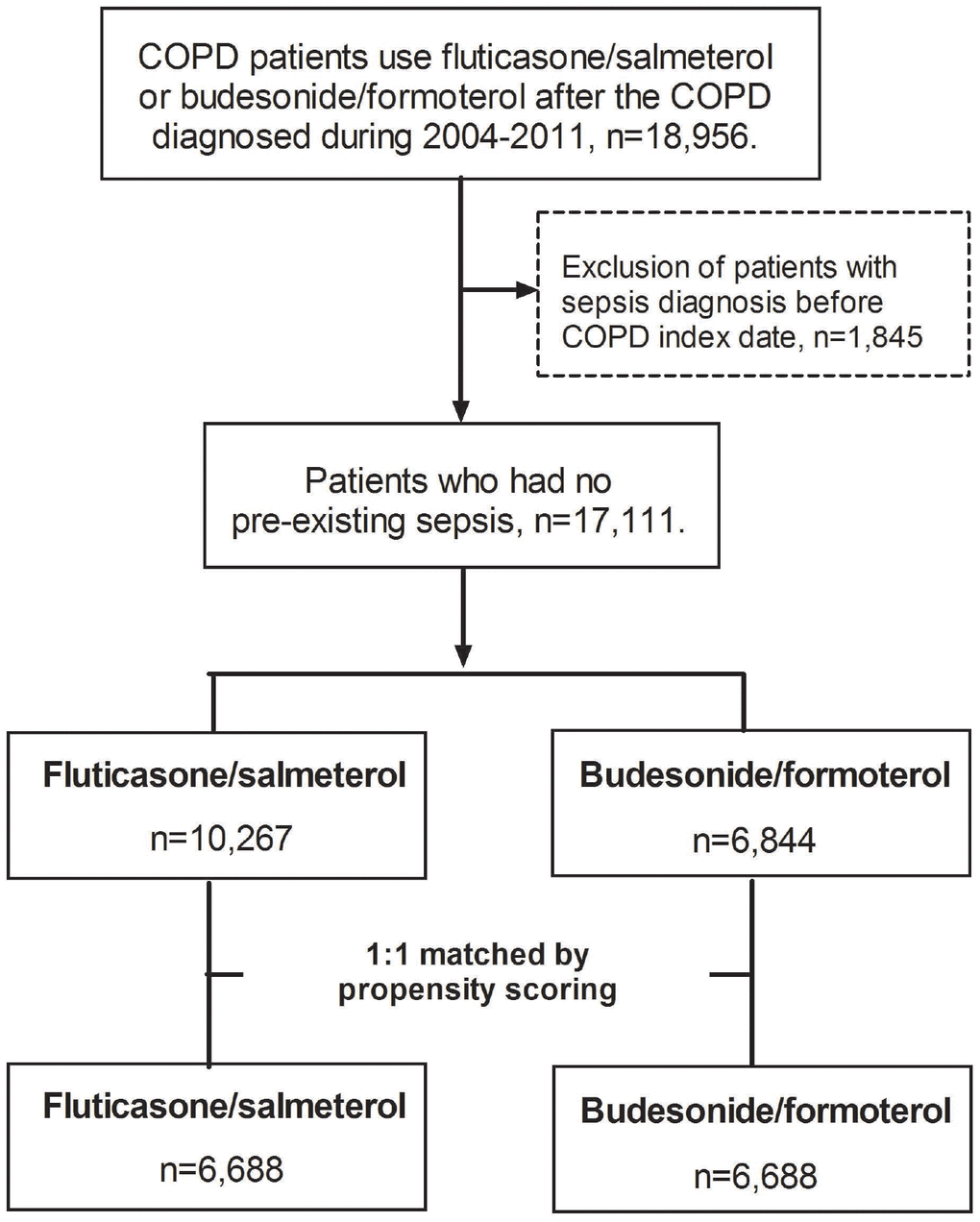 Risk of sepsis and death

Table 1. Incidences (per 100 person-years) and risk of sepsis and mortality among fluticasone/salmeterol and budesonide/formoterol. 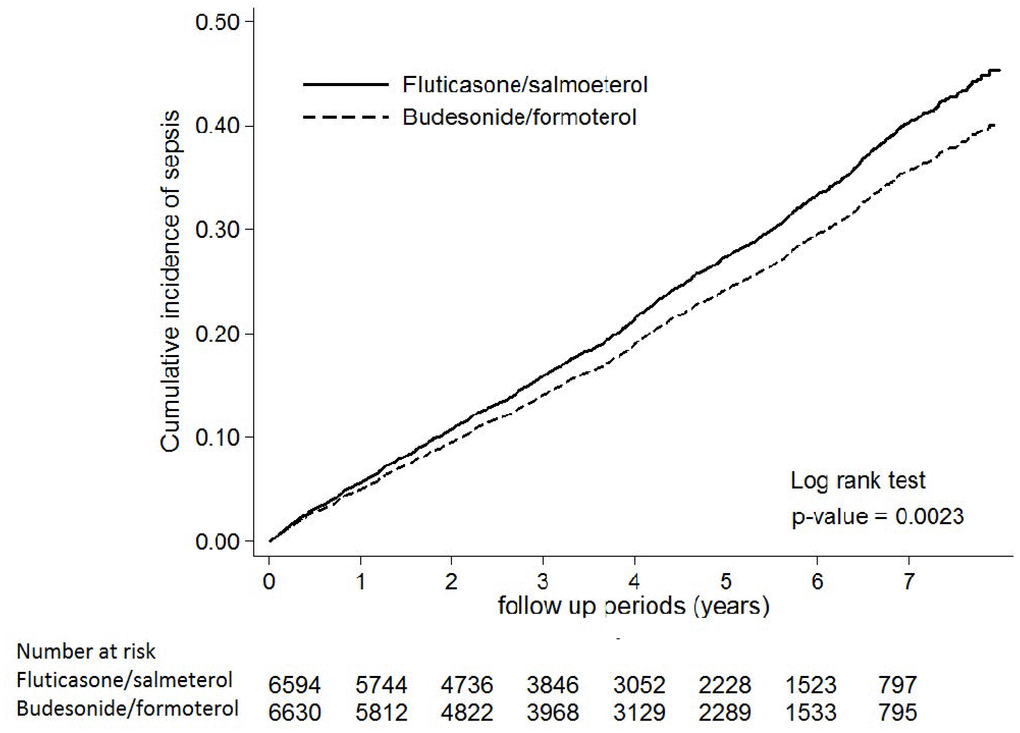 Figure 2. Cumulative incidence curve for sepsis in the patients prescribed with fluticasone/salmeterol and budesonide/formoterol. Times to events were compared using log-rank tests.

Table 2. Sensitivity analyses for risk of sepsis and mortality among fluticasone/salmeterol and budesonide/formoterol.

Fluticasone/salmeterol was associated with a higher risk of sepsis related respiratory organ dysfunction than budesonide/formoterol. Although the other organ dysfunction had the same trends, the difference did not reach statistical significance. Moreover, fluticasone/salmeterol was associated with higher risk of several types of infections, including lower respiratory tract infection, genitourinary tract infection, bacteremia and skin infection than budesonide/formoterol (Table 3).

Table 3. Incidences (per 100 person-years) of severe sepsis-related organ dysfunction and infection types in a COPD patients prescribed with fluticasone/salmeterol and budesonide/formoterol after propensity score matching.

The following differences between budesonide/formoterol and fluticasone/salmeterol can support our findings. Budesonide and fluticasone differ in their pharmacokinetic properties, and the rates of uptake and elimination are slower for fluticasone [18]. In addition, the mean residence time in the systemic circulation has been reported to be shorter for budesonide than for fluticasone (4.41 hours versus 12.78 hours, respectively), and the quantity of expectorated fluticasone has been reported to be significantly higher compared to budesonide (ratio 5.21; P = 0.006) [20]. Fluticasone has been reported to be approximately 10 times more potent than budesonide in inhibiting the release of IL-6, IL-8, and TNF-α production from human alveolar macrophages [20]. In summary, all these differences can make fluticasone retention longer in the airway and exhibit greater immunosuppressive effect than budesonide, and thereby fluticasone can be associated with higher risk of bacterial colonization and infection-associated exacerbations than budensonide [18–20]. Other than the pharmacokinetic differences between budesonide and fluticasone, their differences in individual dosage might be related the risk of sepsis. Based on the findings of the study [22] investigating the association between ICS and risk of serious pneumonia, the risk was twofold with fluticasone (RR 2.01; 95% CI 1.93 to 2.10), and the risk was increasing with the daily dose. In contrast, the risk of serious pneumonia was only 1.17 with budesonide (95% CI 1.09 to 1.26), and the dose-response relationship was not as evident as fluticasone. Moreover, this study [22] also demonstrated that the effect of ICS on the risk of pneumonia would peak in the first year of use and remains elevated and stable even up to 5 years of continuous use.

This study has the major strength. A large COPD cohort in a real world was enrolled in this study and the effect of many confounding factor were minimized. Thus, our results could reveal the status of COPD patients in Taiwan and could be generalized to other sites.

This study has several limitations. First, the result of pulmonary function test results was not available, so the severity of COPD was not determined. Second, although many confounding factors was collected and adjusted in this study, it is still possible that residual confounding factors were exists.

A subset of the NHIRD including data on 2,200,000 COPD patient was used for this study. This population was followed between 2004 and 2011. International Classification of Diseases, Ninth Revision, Clinical Modification (ICD-9-CM) codes 491, 492, and 496 were used to identify patients with COPD. Only patients with at least three outpatient or inpatient visits for COPD and those aged between 40 and 100 years were included. We defined the index date as the date of the first fixed prescription for a combination of ICSs/LABAs for COPD. The patients were followed from 1 January 2004 to the either one of the following outcomes, including the end of the study (31 December 2011), emigration or mortality. Ethical approval was obtained from the Institutional Review Board (No. CTH-104-3-5-030).

The primary outcome was sepsis, which was defined using ICD-9-CM codes as previously reported.16 Only the first episode of sepsis was included but those with previous sepsis were excluded. The secondary outcome was all-cause mortality. Moreover, the source of infection, and organ dysfunction were recorded as previous reported, [23] Sepsis patients received sympathomimetic or vasopressin were defined as septic shock.

Comorbidity data were retrieved according to ICD-9-CM codes and the severity of the comorbidities was assessed using Charlson Comorbidity Index (CCI). Concomitant medications, particularly medications for COPD (LABAs, short-acting β2-agonists (SABAs), long-acting muscarinic antagonists (LAMAs), and ICSs), were recorded. Fixed ICS/LABA combinations were defined as ATC codes R03AK06 or R03AK07. COPD exacerbations were only recorded during the period when the ICS/LABA combinations were prescribed.

Propensity score method was generated for the likelihood of fluticasone/salmeterol use (with budesonide/formoterol use as reference group). A logistic regression with covariates of index year, age, sex, monthly income, hospital level, the number of outpatient visits, the use of concomitant medication, and underlying comorbidities (Supplementary Table 1) was used to compute the propensity scores. We used cox regression models to assess the crude and adjusted hazard ratios (HRs) of the outcomes in the two groups for propensity scores (continuous). The budesonide/formoterol group was used as the reference group. The crude incidence of sepsis was defined as the total episodes of events divided by the person-years.

This study used intention-to-treat analysis as the primary analysis. In the as-treated analysis, the patients were censored when they switched to another ICS/LABA and when they out of the study. We used Kaplan-Meier method to construct cumulative incidence curves.