The burden of liver cirrhosis and underlying etiologies: results from the global burden of disease study 2017

Copyright: © 2021 Zhai et al. This is an open access article distributed under the terms of the Creative Commons Attribution License (CC BY 3.0), which permits unrestricted use, distribution, and reproduction in any medium, provided the original author and source are credited.

Background: To evaluate the pattern and prevalence trends of liver cirrhosis caused by specific etiologies.

Results: Globally, the number of prevalent cases increased 74.53% from 1990 to 2017. The ASR increased 0.75 per year. The most pronounced increases were found in middle-high and high socio-demographic index (SDI) regions, especially in the Caribbean and Latin America. Among the etiologies, non-alcoholic steatohepatitis (NASH) related liver cirrhosis accounted for 59.46% of the cases. The ASR increased 1.74 per year, and the increase was observed in all 5 SDI regions. In addition, the ASR of liver cirrhosis caused by alcohol also increased in both sexes and all SDI regions. In contrast, the ASR of liver cirrhosis caused by hepatitis B virus (HBV) and hepatitis C virus (HCV) decreased, especially in middle and low-middle SDI regions.

Methods: We collected data based on Global Burden of Disease (GBD) 2017 study. The age standardized prevalence rate (ASR) and estimated annual percentage changes (EAPC) were used to estimate the trends in prevalence by population, etiologies and regions.

Liver cirrhosis is a major health issue that afflicted more than 160 million people in 2017 worldwide [1]. Previous studies have documented that the incidence of liver cirrhosis varies, and chronic viral hepatitis is the most common cause, especially hepatitis B virus (HBV) and hepatitis C virus (HCV) [2, 3]. The highest incidence of liver cirrhosis is found in East Asia. In contrast, the incidence in Southern Latin America is the lowest, with a value of 12.1% [2]. Moreover, newly diagnosed cases continue to increase globally in the last few decades, although many public health initiatives have been implemented. 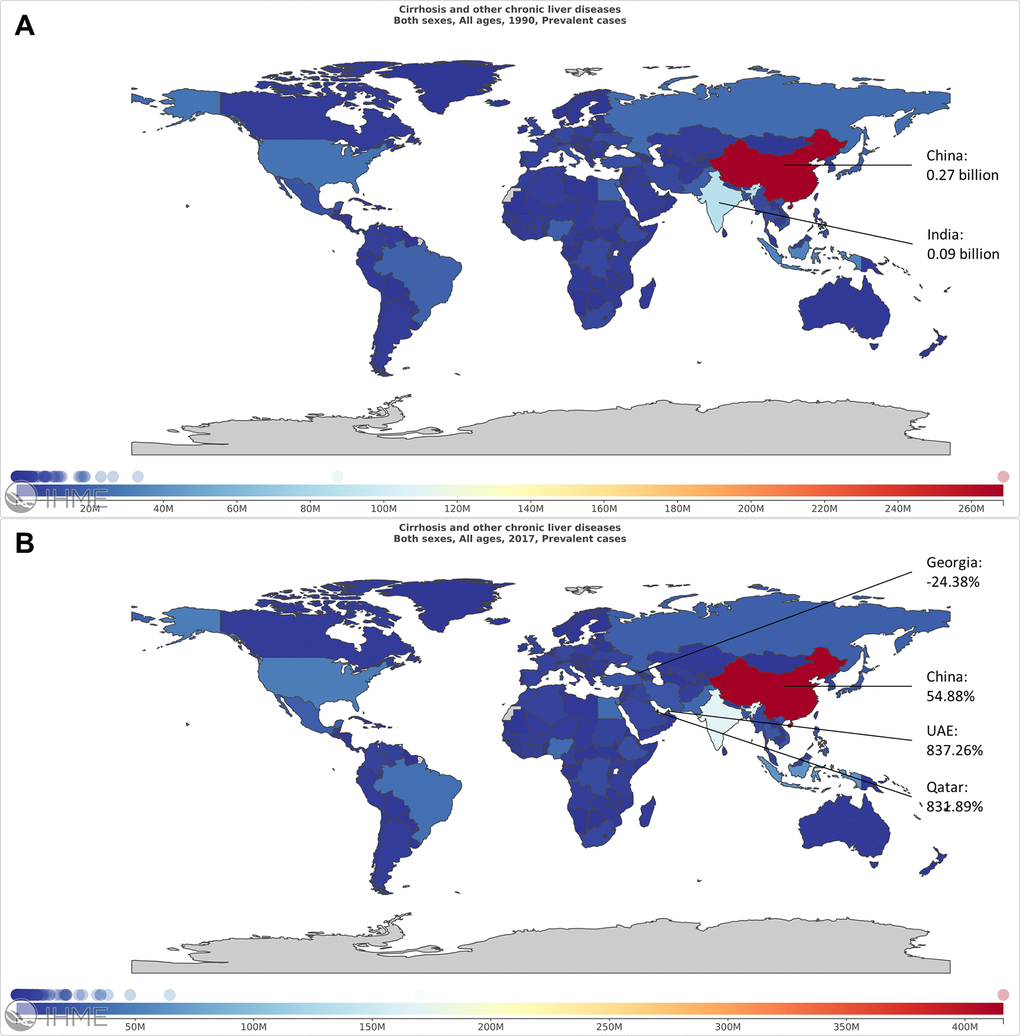 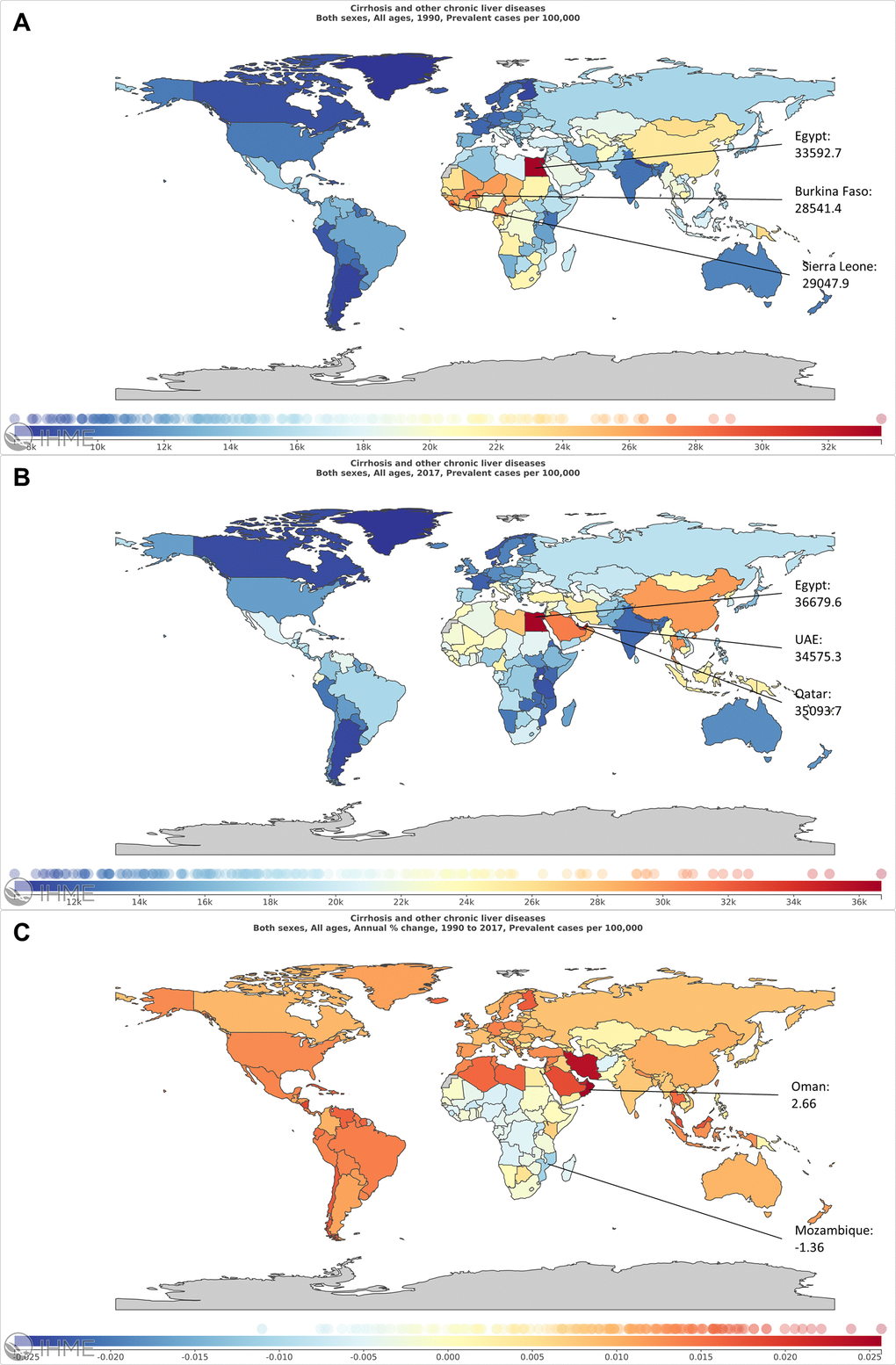 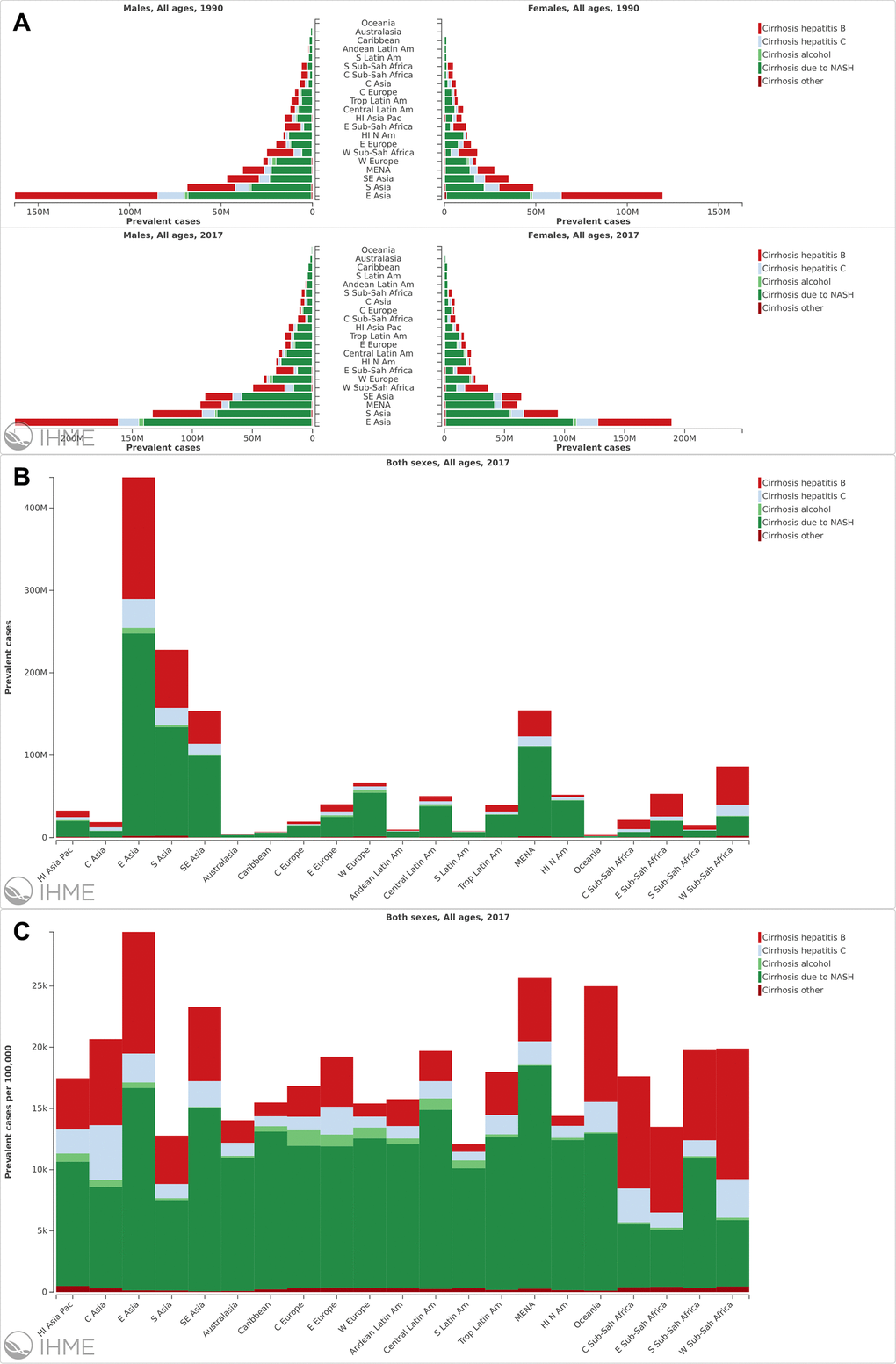 For etiologies of liver cirrhosis, NASH was the main etiology with 0.89 billion prevalent patients (59.46% of liver cirrhosis cases). A total of 0.43 billion prevalent cases were infected with HBV (28.72%) (Figure 5A and Supplementary Table 7). Additionally, the fastest increase in ASR was also found in patients with NASH (EAPC=1.74 95% CI 1.73-1.75). Contrarily, The ASR decreased in patients infected with HBV and HCV from 1990 to 2017 (Supplementary Table 7). 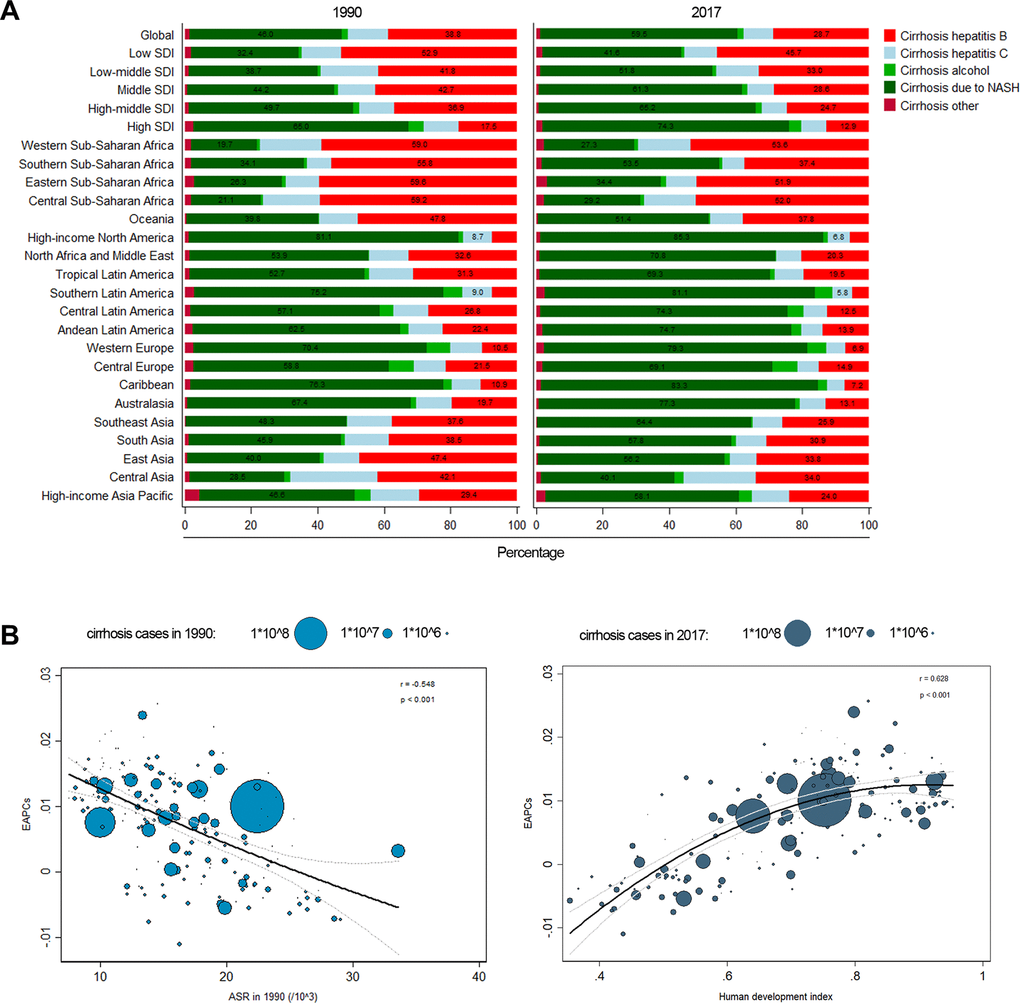 The influential factors for EAPC

A significant relationship was studied between EAPC and ASR, HDI, respectively. The ASR of liver cirrhosis could be considered the disease reservoir at baseline. Additionally, the HDI could be considered the level of available medical resources. In or study, the EAPC was negatively correlated with the ASR in 1990 (r=-0.548, p<0.001) (Figure 5B). In contrast, the EAPC was positively correlated with the HDI in 2017 (r=0.628, p<0.001) (Figure 5B). The results demonstrated that countries with higher HDI have suffered a more rapid increase in ASR of liver cirrhosis.

Liver cirrhosis due to NASH

Liver cirrhosis due to hepatitis B

Liver cirrhosis due to hepatitis C

Liver cirrhosis due to alcohol use

Liver cirrhosis due to other causes

HBV was an important risk factor for liver cirrhosis in some regions [6, 18]. Moreover, HBV infection contributed to half of the mortality associated with liver cancer [19]. In our study, we found that liver cirrhosis caused by HBV was more prevalent in the low-middle and middle SDI regions. Additionally, more than 50% of patients with liver cirrhosis in Africa were caused by HBV, and nearly 40% of the cases in East Asia, Central Asia and Oceania were also caused by HBV. By promoting HBV vaccination, the ASR of the 21 regions decreased over the last few decades. Although China had the largest number of HBV patients, the growth rate was only 10.21% from 1990 to 2017. This was mainly due to the promotion of HBV vaccines in China [20]. By implementing these measures, the number of patients suffering from HBV infection was significantly suppressed in the general population [21, 22]. Amazingly, although the ASR decreased during the period in all 5 SDI regions, the slowest decrease was found in high the SDI regions, such as North America–high income and South Asia. This finding indicates that more effective public measures to prevent HBV should be implemented in these countries [23]. Moreover, the development of anti-HBV drugs, such as entecavir and tenofovir, has further reduced the number of patients [24]. Thus, we can expect that the number of patients with liver cirrhosis caused by HBV will be significantly decreased in the future.

Similar to liver cirrhosis caused by HBV, the ASR of liver cirrhosis caused by HCV also decreased. Additionally, the ASR of liver cirrhosis caused by HCV also decreased in all 5 SDI regions. To our surprise, the ASR increased in Eastern Europe, Tropical Latin America and North America–high income, which was not the same as the results reported in the study conducted by The Polaris Observatory HCV Collaborators [25]. China also had the largest number of patients with HCV, but the growth rate was 34.01% [26]. This might be related to a lack of effective treatment measures before 2014. Subsequently, direct-acting antiviral therapy was introduced, and more than 90% of patients with all genotypes of HCV could be cured [27]. As a result, interventions should be introduced all over the world, such as promoting direct-acting antiviral therapy and reducing the therapy price.

Alcohol was proven to be a major risk factor for liver cirrhosis. The ASR of liver cirrhosis caused by alcohol use increased from 1990 to 2017. The results obtained by Asrani et al. also revealed that alcohol use and NASH had overtaken hepatitis as the primary causes of liver diseases in Western countries [28]. The increase in ASR was higher in females than in males, similar to the result obtained by Roerecke et al. [29]. Additionally, alcohol was found to play an increasingly important role in chronic liver diseases [30]. Thus, polices to reduce alcohol consumption should be implemented, and people with high alcohol consumption should receive interventions to reduce their intake [29].

Detailed information on liver cirrhosis was obtained from the GBD 2017 study. By using the sociodemographic index (SDI), the 195 countries and territories in the GBD 2017 study were divided into 5 groups. The 195 countries and territories were grouped into 21 regions according to their geographical location. The method of extracting data and the estimation method of liver cirrhosis disease burden were based on the Liu et al. study [1]. Moreover, we collected and analyzed the human development index (HDI) and matched the HDI with the GBD data.

To study the trend in prevalence from 1990 to 2017, the age-standardized prevalence rate (ASR) and the estimated annual percentage change (EAPC) were used [1, 31]. The calculation of ASR and EAPC have been detailed in Liu et al. study [1]. By analyzing the ASR, we determined the prevalence of the disease and changes in etiology. Moreover, the ASR provided a theoretical basis for establishing targeted preventive strategies for public health departments [32]. In our study, EAPC was used to assess the trend in the ASR over a period of time [32, 33]. If ASR was a trend of increase, the value of EAPC and the lower boundary of 95% confidence interval (CI) are both greater than 0. In contrast, if ASR was a trend of decrease, the value of EAPC and the upper boundary of 95% CI are both less than 0. Additionally, if ASR was a constant trend, the 95% CI of EAPC contains 0. Additionally, a correlation analysis was conducted to study the influential factors for EAPC. All data were analyzed by R software (R 3.5.1 software, Institute for Statistics and Mathematics) and STATA (STATA 13.1, StataCorp LLC). A p-value less than 0.05 was considered statistically significant.

We are indebted to individuals who have participated in this study or have helped with this article.