Development of an innovative measurement method for patellar tracking disorder

Copyright: © 2020 Xue et al. This is an open access article distributed under the terms of the Creative Commons Attribution License (CC BY 3.0), which permits unrestricted use, distribution, and reproduction in any medium, provided the original author and source are credited.

A considerable number of patients who suffer from knee pain and instability have abnormal patellar tracking [1]. Knee-joint movement is accomplished through a complex system, with the knee extension device at the center, involving the bone structure and the surrounding muscle and soft tissue [2, 3]. Patellar tracking is the movement of the patella relative to the femorotibial joint within the full range of flexion and extension of the knee joint [4]. If the patella moves abnormally, then patellofemoral joint is unstable, which causes pain [3].

The etiological mechanism of patellar maltracking is still unclear. There are four main pathological mechanisms [5]: (1) abnormalities of the muscles and soft tissues around the knee extension device, including the dynamic structure, such as the morphological abnormalities of the quadriceps [6]; (2) static structural abnormalities, such as a medial patellofemoral ligament injury, severe lateral structure tightness [7], and patella alta [8]; (3) abnormal bony morphology [9], such as increased Q angle, knee valgus, knee hyperextension, and patellar morphology [9, 10]; and (4) abnormal morphology of the external femoral condyle caused by degenerative deformation or dysplasia [11].

Research studies have focused on the patellar tracking, varying from one to six degrees of freedom of motion, in healthy people [8] versus the populations with patellofemoral joint pain [12] and patellar instability [13] using clinical and cadaveric studies. Methods used in these studies were X-ray, computed tomography [11], nuclear magnetic resonance imaging [1], infrared ray capture system [14], electromagnetic capture system [3], and holographic camera capture methods [15]. The studies found that patellar tracking was different in patients with patellofemoral pain and instability than in healthy people. Because previous studies mainly focused on qualitative or semi-quantitative explanations, there was a lack of quantitative and dynamic analyses, leaving the use of patellar tracking as a method for assessing pain or instability of the patellofemoral joint up for debate.

This paper introduces the progress of patellar tracking research, specifically the definition and naming of the coordinate system, measurement objects, measurement methods, and measurement results.

Definition and naming of coordinate system

The studies analyzed for this paper used different origin of coordinates in their research. O'Donnell [1] took the lowest point of the femoral trochlear as the origin of the coordinate system. Reider [5] took the tibial tubercle as the reference point. Nha [15] took the midpoint of the connection between the internal and external epicondyle of femur as the reference point. Lin [8, 16] and Amis et al. [3] took the midpoint of the connection between the posterior femoral condyles as the reference point (Table 1). Lin and Amis et al. set up the space rectangular coordinate system using the midpoint between the posterior femoral condyles as the origin point (translated to the center of femoral shaft axis) (Figure 1). They also defined three vertical axes of translational verse and six-dimensional rotational symmetry of the patellar tracking respectively relative to the coordinate system, including non-rotational displacement along the X, Y, and Z axes. The rotational motions around the three axes are flexion and extension rotation, lateral and medial inclination, and lateral and medial rotation, respectively (Figure 2). The joint coordinate system should describe the patellar tracking relative to the femorotibial joint so there is uniformity among studies. 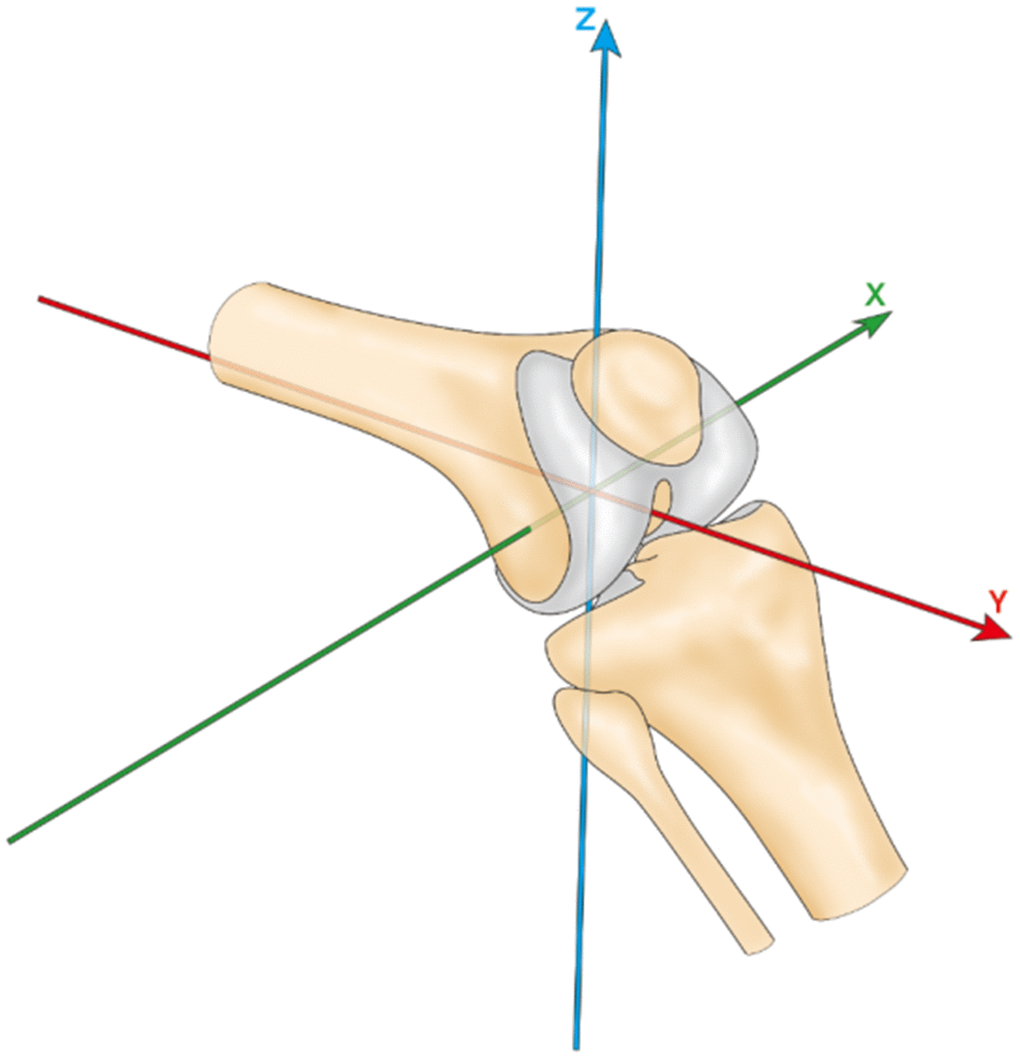 The literature states the patellar tracking research objects were generally divided into cadaveric and clinical studies, with different accuracies and active/passive flexions and extensions, as well as advantages and disadvantages (Table 2 and Table 3). The mentioned advantages of cadaveric research included easy sampling, strong operability, no ethical problems, and the possibility of adding artificial intervention. However, the accuracy was lower than that of clinical research and it was a non-physiological microenvironment. The aforementioned shortcomings could be overcome in clinical studies; however, most of the early clinical studies were invasive operations [10, 17], which required skilled operators and a high-level of patient’s cooperation.

Table 2. Accuracy of active and passive flexion and extension of knee in cadaveric study.

Table 3. Accuracy of active and passive flexion and extension of knee in vivo.

In previous studies, methods used to measure patellar tracking included computed tomography, nuclear magnetic resonance imaging, an infrared tracking system, and a fluorescence capture system to chase the patellar tracking. This has shown there is variation in the knee’s range of motion (Table 4).

Guzzanti [11] and Wilson [14] reported that, compared with the healthy population, patients with anterior knee pain showed a greater tendency for lateral patellar inclination. Carlson [12] believed that the patella inclined internally and then externally. Reider [5] reported the release of the lateral retinaculum, or the contraction of the medial retinaculum, would reduce the trend of lateral inclination, but cutting the medial retinaculum would increase the trend of lateral inclination.

Conclusions on the flexion and extension of the patella were the same across studies [8, 12, 14, 15], and the patella always showed the stretching motion during the process from extension to flexion.

In patients with anterior knee pain, Wilson [14] showed that the pattern of patellar flexion and extension movement was the same as that of healthy people except that the degree of the flexion angle increased when approaching 90° of flexion.

In the healthy population and in patients with anterior knee pain, the patella continued to move proximally while the knee was extended [8, 12].

There are few recorded studies in the literature on the degree of freedom of anterior and posterior translation. Lin [8] reported that, in the healthy population, the patella always had an anterior translation (15°-0°). Cardson [12] believed that patella moved anteriorly and then posteriorly.

Our study reviewed and summarized research studies on the reference point, coordinate system, and measurement objects, methods, and results of patellar tracking.

Some studies used the tibial tubercle [5], the deepest point of femoral trochlear groove [18], and other osseous reference points, while also using the congruence angle, trochlear groove angle, and Q angle to chase the patellar tracking. Such patterns of description were known as the "osseous morphology method" [13]; however, this method depended on the osseous morphology of the objects too much. Any abnormality (such as congenital malformations) could lead to a greater bias in the measurement result. The "six degrees of freedom coordinate system" proposed by Lin et al. [8, 16] (Figure 1 and Figure 2) could weaken the dependence on bone morphology and directly record the tracking of the patella relative to the origin of coordinates, thus obtaining more objective and accurate results. 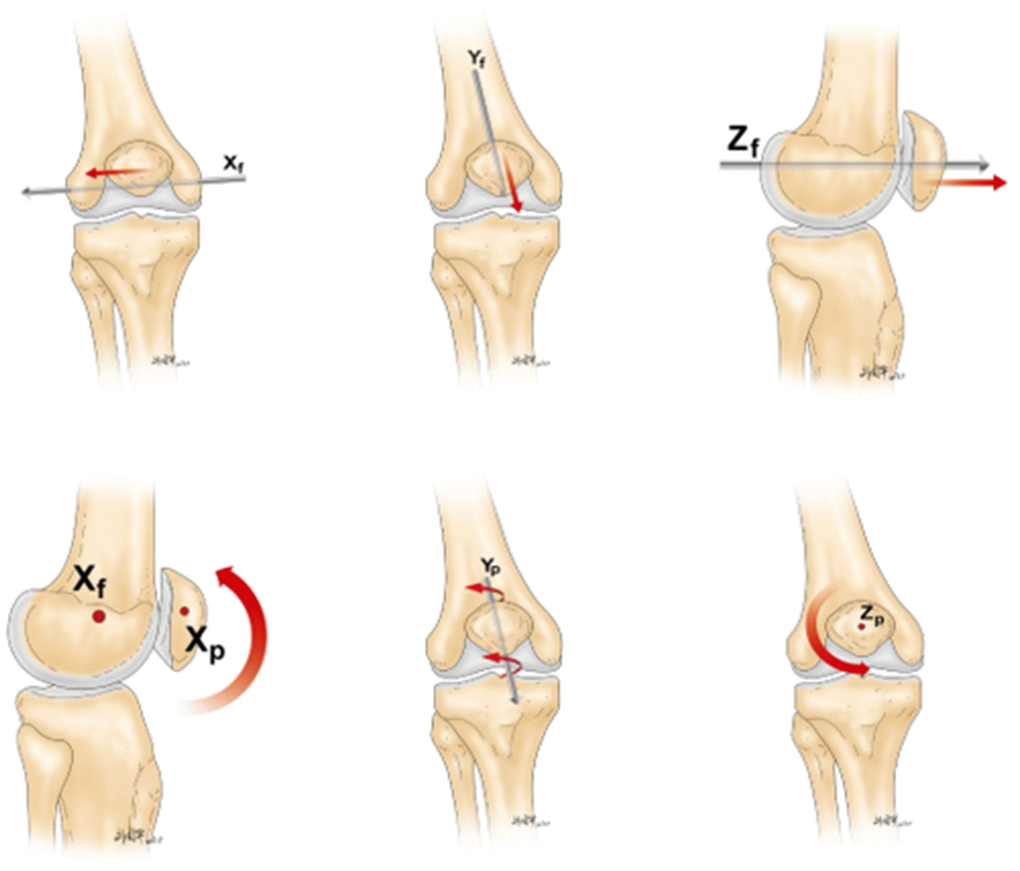 Figure 2. Six degrees of freedom movement of the patella relative to the femorotibial joint.

In some studies, cadaveric specimens were used to measure the patellar tracking [3, 5]. Although the operations were simple and without ethical problems, it was difficult to simulate the state of soft tissue around the knee under physiological conditions (such as quadriceps, muscle force, and ligament and soft tissue tension), resulting in a large systematic error. In recent years, researchers have performed the study in vivo frequently without anesthesia [8, 12, 14–16], which achieves a higher measurement accuracy and smaller error, resulting in the maximum recording the physiological condition of patellar tracking. Nevertheless, there were still some limitations, including the complex instrument operation and the high demand of cooperation between knee joint motion muscle strength of patients. No measurement method can currently be used to quantitatively evaluate the continuous dynamics of patellar tracking, and further research is still needed.

Studies reported that as the knee joint moves from flexion to extension, there are six degrees of freedom movement for the patella, but there are two main degrees of freedom within the patellar medial/lateral translation and inclination. In healthy people [1, 3, 5, 8, 12, 14, 15], the patellar moved along a straight line (some patients presented the medial and lateral micro-movement in the studies). However, in patients with patellofemoral pain and instability [1, 5, 11, 12, 14, 18], there was a significant lateral patellar translation and inclination. This suggests abnormal patellar tracking might be one of the symptoms and causes of patellofemoral pain and instability.

The mechanism of patellofemoral pain and instability has not yet been clarified. Previous surgical intervention methods focused on the rearrangement of soft tissue structures, such as medial retinaculum compression or lateral retinaculum release, to relieve the pain from the patellofemoral joint [20, 21]. The reconstruction of the medial patellofemoral ligament, the first-grade stable structure of the patella, was pivotal in the treatment of patellofemoral joint instability [22]. However, there are studies that reported there was a long-term failure rate of up to 20% for this operation [2]. Therefore, it is particularly important to correct bone deformities, such as patella alta, abnormal femoral trochlear, external tibial tubercle, excessive femoral anteversion angle, and tibial external rotation angle. Additionally, studies have shown that Caton index >1.2, type B and D femoral trochlear morphology, tibial tuberosity-trochlear groove distance >20mm [13], femoral anteversion >23°, and tibial external rotation angle >30° are possible causes of surgical failure [23, 24] and patellar maltracking [25, 26]. The excessive femoral anteversion angle could cause sudden patellar lateral translation at the extremity of the knee extension, defined as the "J sign" [4]. This may be a cause of failure as well, and we speculate that it is one of the causes of long-term medial patellofemoral ligament reconstruction failure. Therefore, a comprehensive, accurate and dynamic evaluation of the patellofemoral joint was necessary for patients with patellofemoral pain and instability.

The collected articles were summarized from the abstract and selected according to inclusion criteria. The initial inclusion criteria included research that had: (1) at least one method describing the patellar tracking; (2) an analyzation of patellar tracking; (3) clinical or cadaveric studies; and (4) the evidence level of literature varied from I to IV. Literature that did not meet this inclusion criteria would be excluded. After the preliminary screening with this criteria, 561 references were selected as potentially related to this study. After reviewing the titles and abstracts of the articles, 57 references were selected. After excluding low-evidence-based manuscripts, reviews, and non-English research, 42 references were selected. Lastly, research that lacked a patellar tracking assessment method and measurement results were excluded. After the last exclusions, 19 research manuscripts were selected and used for this paper’s analysis.