Copyright: © 2020 Zhou et al. This is an open access article distributed under the terms of the Creative Commons Attribution License (CC BY 3.0), which permits unrestricted use, distribution, and reproduction in any medium, provided the original author and source are credited.

Studies on antiplatelet effect of ticagrelor/aspirin and clopidogrel/aspirin in patients with acute minor stroke and transient ischemic attack (TIA) stratified by CYP2C19 metabolizer status is limited. We gained data from the Platelet Reactivity In Non-disabling Cerebrovascular Events study. Platelet reactivity was tested at baseline, 2 hours, 24 hours, 7 days and 90 days after initial dose, including high on-treatment platelet reactivity (HOPR), which was defined as P2Y12 reaction unit >208, and percentage inhibition of platelet aggregation (IPA). A total of 365 patients were included. There were 199 (54.5%) individuals classified as carriers of CYP2C19 loss-of-function alleles. For carriers and non-carriers, the proportions of HOPR were significantly lower in those with ticagrelor/aspirin compared with those with clopidogrel/aspirin at 2 hours, 24 hours, 7 days, respectively (all p<0.05). IPA was higher at all time points except at baseline in patients with ticagrelor/aspirin compared with those with clopidogrel/aspirin in both carriers and non-carriers of CYP2C19 lose-of-function alleles (all p<0.05). Our findings showed that ticagrelor/aspirin therapy possessed greater platelet inhibition and more rapid onset in platelet inhibition compared with clopidogrel/aspirin therapy both in carriers and non-carriers of CYP2C19 lose-of-function alleles with acute minor stroke or TIA.

The risk of stroke recurrence is high after acute minor stroke or transient ischemic attack (TIA). [1] The Clopidogrel with Aspirin in Acute Minor Stroke or Transient Ischemic Attack study showed that combination of clopidogrel and aspirin with 24 hours could reduce the risk of stroke in 90 days without increasing the risk of hemorrhage. [2] However, the subsequent analysis found that the application of clopidogrel and aspirin compared with aspirin alone reduced the risk of recurrent stroke only in patients who were non-carriers of the CYP2C19 loss-of-function (LOF) alleles. [3] The polymorphisms of the CYP2C19 gene have been identified to play a significant role in the metabolism of clopidogrel. [4] Previous study showed that about 40-60% Asian participants were carriers of CYP2C19 LOF alleles, who could not benefit from clopidogrel. [3]

Ticagrelor is a new, oral, direct-acting, and reversible P2Y12 ADP receptor blocker which does not require metabolic activation. Several studies showed that ticagrelor possessed a faster and greater antiplatelet effect and was more effective than clopidogrel irrespective of variants in the CYP2C19 genotype in cardiovascular disease. [5, 6] The Acute Stroke or Transient Ischemic Attack Treated with Aspirin or Ticagrelor and Patient Outcomes (SOCRATES) trial was the first study to compare the efficacy and safety of ticagrelor versus aspirin in patients with acute ischemic stroke or TIA, but did not find a significant result. [7] However, the subgroup analysis of the SOCRATES trial [8] indicated that ticagrelor might be superior to aspirin at preventing atherosclerotic origin cerebrovascular events. Whether patients can benefit from more intensive antiplatelet therapy-combination of ticagrelor and aspirin remains controversial. Recently, the Platelet Reactivity In Non-disabling Cerebrovascular Events (PRINCE) study reported that patients with minor stroke or TIA treated with ticagrelor/aspirin had a lower proportion of high on-treatment platelet reactivity (HOPR), especially in carriers of the CYP2C19 LOF alleles compared with those treated with clopidogrel/aspirin. [9]

This sub-analysis aimed to investigate the effect of ticagrelor/aspirin on HOPR and inhibition of platelet aggregation (IPA) during study time course stratified by CYP2C19 metabolizer status compared with clopidogrel/aspirin.

Study flow was shown in Figure 1. We conducted valid measurements in 376 and 373 patients for VerifyNow P2Y12 assay at 2 hours and 24 hours after first dose respectively. A total of 365 out of 675 patients with acute minor stroke and TIA were finally included in our early test sub-study with no patient missed CYP2C19 genotype data or lost to follow up. Patients included tended to be older, have a history of dyslipidemia, use statin and aspirin before randomization (Table 1). Among the 365 included patients, 105 (28.8%) of them were female, the average age was 61.7±8.5 years, 199 (54.5%) of them were classified as carriers of CYP2C19 LOF alleles, 180 (49.3%) of them received ticagrelor/aspirin therapy and 185 (50.7%) of them received clopidogrel/aspirin therapy (Table 2). Baseline characteristics between LOF allele carriers and non-carriers were well balanced. 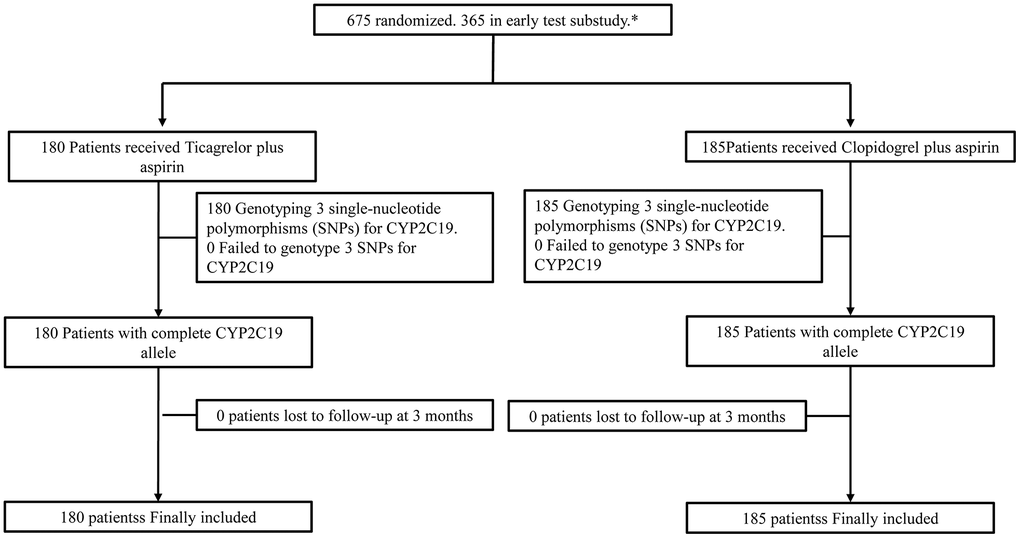 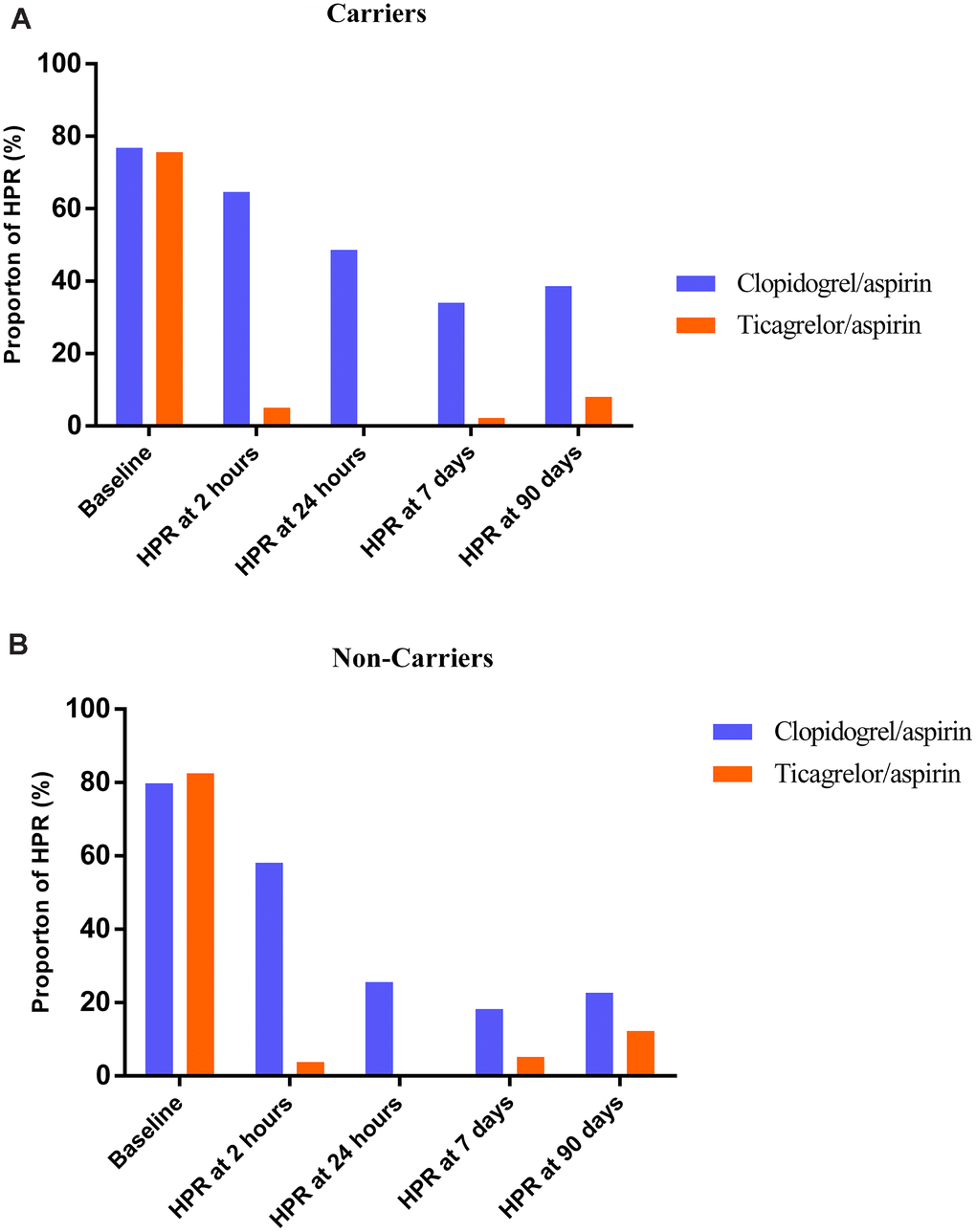 Table 5. Major clinical events and safety of ticagrelor/aspirin as compared with clopidogrel/aspirin at 7 days stratified by metabolizer status.

Previous study identified patients with IPA <40% as resistant. [17] In the present study, IPAs of both carriers and non-carriers treated with ticagrelor/aspirin were much higher than 40% 2 hours after administration. While IPAs of carriers with clopidogrel/aspirin therapy were consistently lower than 40%, and non-carriers with clopidogrel/aspirin therapy had IPA increasing to nearly 40% after 24 hours, and reaching more than 40% in the 7 days after administration. Luo and his colleagues reported that the combination of an elevated PRU and a decreased IPA was associated with significantly higher incidence of major adverse cardiac events than one or neither. [18] However, the present study was not powerful enough to show whether proportion of HOPR and IPA were associated with clinical outcomes of acute minor stroke and TIA patients.

Previous study showed that CYP2C19 LOF alleles were associated with increased risk of cardiac-cerebral vascular events and poorer clinical outcomes, [3, 19, 20] especially in Asians. [21] Kazi et al. suggested that genotype-guided personalized therapy may improve the cost-effectiveness of the newer antiplatelet agents, additionally, ticagrelor was considered to be the most cost-effective for carriers and non-carriers of CYP2C19 LOF alleles in acute coronary disease. [22] Although the SOCRATES study did not achieve a significant result, it indicated that combination of ticagrelor and aspirin might be effective in Asian patients. [23, 24] As reported, there was a high risk of another stroke after minor stroke and TIA in the first two weeks, with particularly high events rates in the first two days. [1, 25] In our study, the ticagrelor/aspirin therapy could quickly take effect on IPA within 2 hours and almost diminished the HOPR at 24 hours both in carriers and non-carriers of CYP2C19 LOF alleles, while clopidogrel/aspirin therapy seemed to reach maximal effect until 7 days. Our results indicated that ticagrelor/aspirin therapy might be a more appropriate strategy for acute minor stroke and TIA patients carrying CYP2C19 LOF allele. Considering the high cost of platelet function test and expensive charge of ticagrelor, perhaps, the genotype-guided personalized combination therapy of ticagrelor and aspirin may be more cost effective. Further study on the efficacy of more intensive platelet inhibition on prognosis of acute minor stroke and TIA is needed.

Our study has several limitations. First, the number of included patients is small. The calculated number of included patients of the PRINCE study was 952 patients to achieve the primary outcome. The interim analysis based on 476 patients (50% of the projected necessary sample size) with intact data conducted by data safety monitoring board, achieved a prespecified threshold for efficacy, so the study was terminated in advance. Our study is a sub-analysis and we reviewed the previous articles on antiplatelet effects of ticagrelor and clopidogrel, the number of included patients was always between 100-200. Thus, the sample size of our study could be effective. Second, CYP2C19 gene could also be found in other disease, which will affect platelet aggregation through other factors not only clopidogrel. It may affect the conclusion of this manuscript. Third, the present study showed that the inhibition of platelet function was maximized at 24 hours of ticagrelor/aspirin therapy (Figure 3), while previous studies showed the maximal antiplatelet effect occurred at 1-2 hours, [16, 26] which may due to the inconsecutive testing.

Considering that CYP2C19 gene can affect many other P450 metabolized drugs, if the patient is taking a drug affected by the CYP2C19 genotype in prior to enrollment, we will recommend stopping the drug or switching to an alternative drug. Detailed information of drug combination was collected. And such patients will be labeled and treated accordingly. All medicine including Chinese herbal medicine that may affect function of platelet is prohibited during the trial. Other medicine such as lipid-lowering medicine, antidiabetic, antihypertensive drugs, can be normally used.

The primary outcomes of our study were the proportions of patients with HOPR and IPA at baseline, 2 hours, 24 hours, 7 days and 90 days, respectively. The HOPR was defined as PRU>208. Percentage of IPA was calculated using standard formulas, where PA was platelet aggregation, b was pre-dosing, and t was post-dosing: IPA (%) = 100% × (PAb – PAt)/PAb.

The primary safety outcome was major clinical events including new-onset ischemic or hemorrhagic stroke, myocardial infarction, death, and major bleeding according to the Platelet Inhibition and Patient Outcomes (PLATO) study including fatal/life-threatening bleed, major bleed and others, at 7 days.

The PRU and IPA are tested by the VerifyNow P2Y12 assay, a turbidimetric-based optical detection system, according to the manufacturer’s instructions. The VerifyNow P2Y12 assay was well studied and used widely in testing P2Y12 receptor activity. The device measured platelet-induced aggregation as an increase in light transmittance and used a proprietary algorithm to report values of PRU. [28]

All statistical analysis was performed using the SAS 9.4 (SAS Institute Inc, Cary, NC). All reported p values were two-sided with p<0.05 considered significant. The baseline characteristics were compared between patients included and excluded, and between two treatment groups in carriers and non-carriers of CYP2C19 LOF alleles. Categorical variables were presented in proportions, and continuous variables were presented in means ±SD or medians with interquartile ranges. Nonparametric Kruskal-Wallis test was used to compare group differences for nominal variables, and χ2 tests or Fisher’s exact test for dichotomous variables. The proportions of HOPR and IPAs at 2 hours, 24 hours, 7 days and 90 days were respectively compared between the two therapy groups using genmod models adjusted by the high platelet reactivity status at baseline, RR with 95% CI was presented for HOPR, and β with 95% CI was presented for IPA. Differences in the rates of new-onset stroke, myocardial infarction, death, and bleeding events during 7-day follow-up were assessed using Cox proportional hazards regression and HR with 95% CI. Whether the treatment effect differed in certain genotype categories was assessed by testing the treatment-by-genotype interaction effect using genmod models for the primary outcome and Cox models for the primary safety outcome.

Thanks to all the participating hospitals in the study and thank all enrolled patients and their families.

Authors have no potential conflicts of interest.