Copyright: © 2021 Zhao et al. This is an open access article distributed under the terms of the Creative Commons Attribution License (CC BY 3.0), which permits unrestricted use, distribution, and reproduction in any medium, provided the original author and source are credited.

In this meta-analysis, we explored whether tirofiban could safely improve outcomes when combined with endovascular therapy in acute ischemic stroke with large vessel occlusion. We searched the PubMed, EMBASE, Web of Science, and The Cochrane Library databases from January 2000 to October 2019 for relevant RCTs/non-RCTs. A total of 13 trials involving 2584 patients, of whom 893 (34.5%) received tirofiban, were ultimately included in the meta-analysis. The results suggested that tirofiban improved patient independence at 90 days (51.2% vs 42.4%; OR 1.26; p =0.02) without increasing the risk of symptomatic intracranial hemorrhage (OR 1.01; p =0.96) or mortality (OR 0.86; p =0.09). There was no association between the use of tirofiban and recanalization rate (OR 1.35; p =0.11). Subgroup analysis showed that a loading dose followed by maintenance doses, but not a single dose, of tirofiban increased favorable 90-day functional outcomes (OR 1.49; p =0.0008). Moreover, low maintenance doses may be more effective than high maintenance doses (OR 1.41; p =0.02). These results suggest that adjunctive tirofiban treatment administered as a loading dose followed by low-dose maintenance may improve functional outcomes of endovascular therapy in acute ischemic stroke.

Although growing evidence demonstrate that mechanical thrombectomy may improve neurological functional outcomes for ischemic stroke patients with large vessel occlusion [3–11], one third to half of patients still fail to return to an independent lifestyle due in part to refractory occlusion, re-occlusion, and distal embolism. Adjunctive therapies, including angioplasty, intra-artery thrombolysis, and GP IIb/IIIa antagonists can improve recanalization rates in culprit occlusive vessels. However, conflicting results have been obtained regarding the efficacy and safety of tirofiban in acute ischemic stroke after endovascular treatment (EVT) [12–15].

Database searches identified 339 citations; 66 duplicate references were then removed. Examination of the titles and abstracts of the shortlisted citations resulted in the exclusion of an additional 229 papers. The 44 remaining studies were comprehensively examined in their entirety for compliance with the inclusion/exclusion criteria. Ultimately, 13 eligible studies were included in this meta-analysis (Figure 1) [12–14, 16–25]. 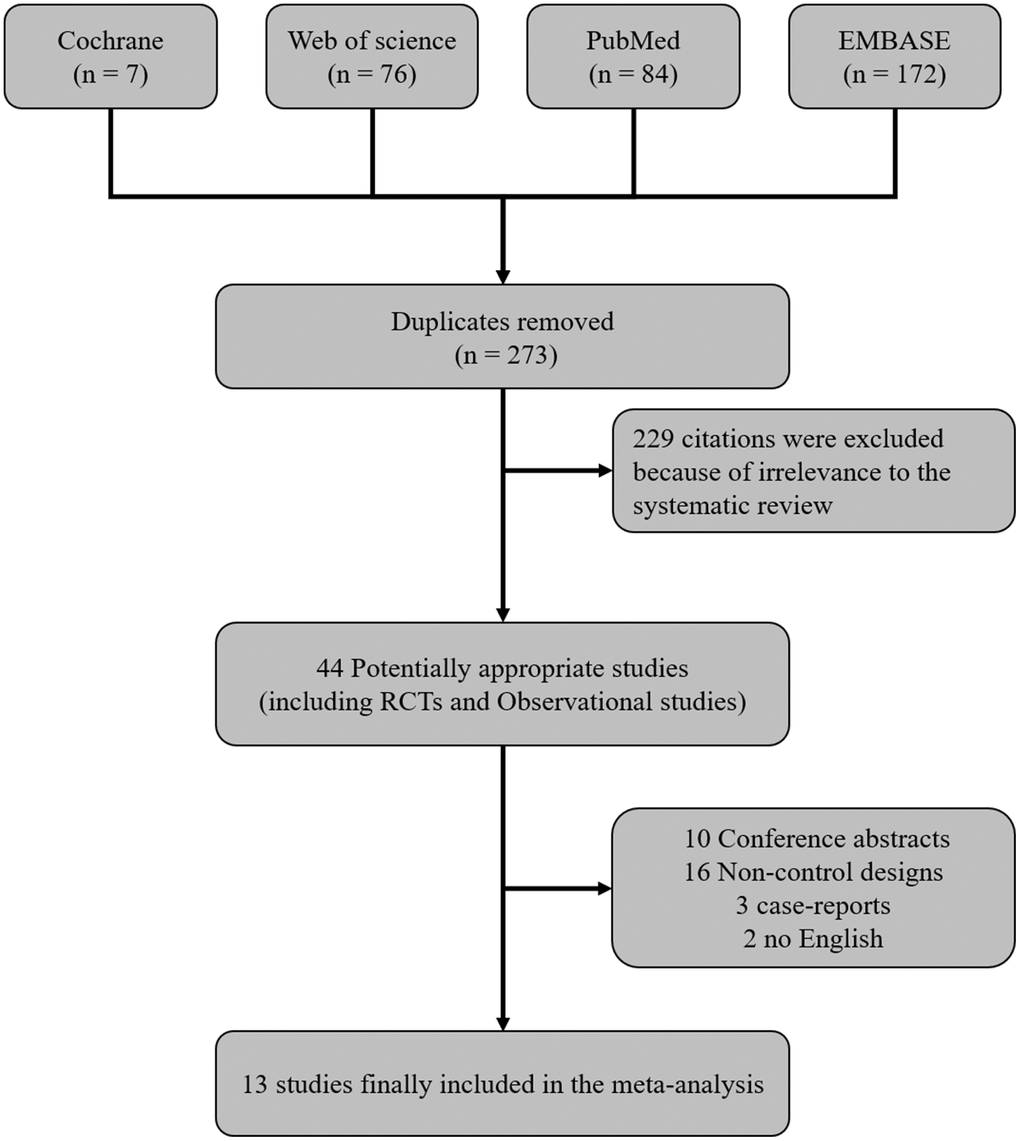 The following data were collected from each of the included studies: study design, location, time period, endovascular device used, intravenous thrombolysis, tirofiban application, time from symptom onset to groin puncture/recanalization, recanalization outcome, age, and baseline NIHSS (Supplementary Table 1). The majority of culprit vessels were located in the anterior circulation (n =2110, 81.7%). Intravenous thrombolysis bridging treatment with EVT was addressed in 9 of 13 studies. With two exceptions, rates of intravenous thrombolysis did not differ significantly between patients treated with or without tirofiban in these studies; the exceptions were the studies by Pan X et al. and Wu YF et al. [12, 19]. In those two, fewer tirofiban patients had received intravenous thrombolysis than in the other studies. Mechanical thrombectomy or direct contact aspiration was performed as first-line EVT in 12 studies, and emergent carotid artery stenting was performed within 6 h of symptom onset or in the case of penumbra reservation indicated by Computed Tomography Perfusion (CTP) in 1 study [21]. Of the 12 non-RCTs, 9 addressed indications of tirofiban, which included angioplasty, residual moderate stenosis to occlusion in culprit vessels, and intimal membrane injury [17–19, 21–23]. The other 3 studies did not address the exact indications of tirofiban [12–14, 20]. The studies were divided into the following two groups based on tirofiban dosage: 1) single dose administration (4 studies) [12, 17, 20, 22]; 2) standard administration (loading + maintenance): loading dose followed by low-dose maintenance (5 studies) [13, 18, 21, 23, 25] or high-dose maintenance (2 studies) [16, 19]. Dosage details were not available in the studies by Kellert et al. [14] and Sun C et al. [26]. 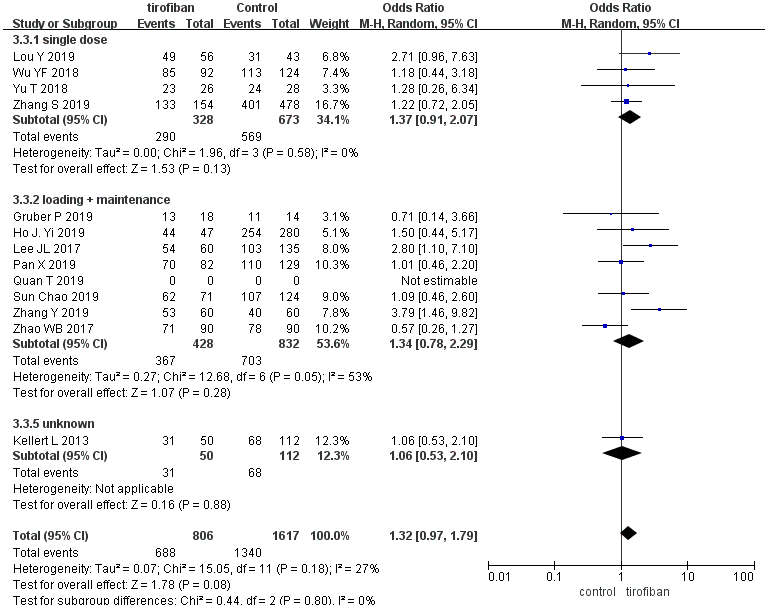 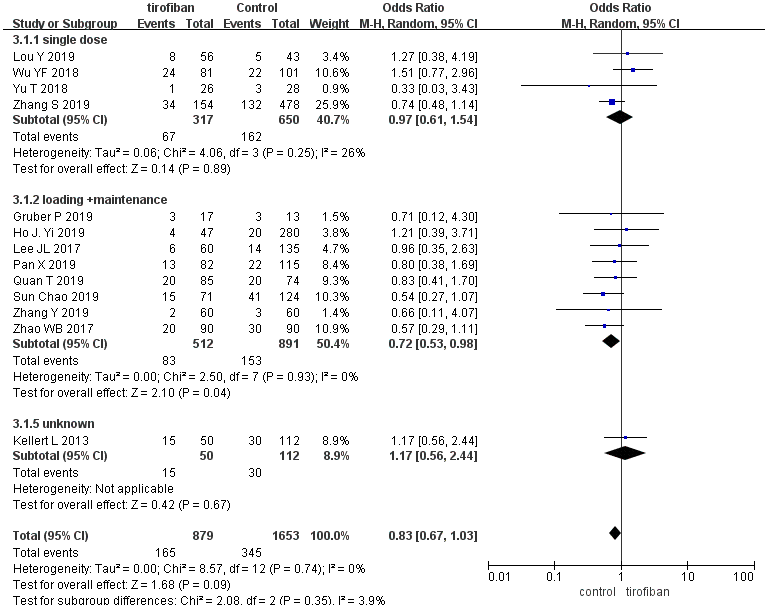 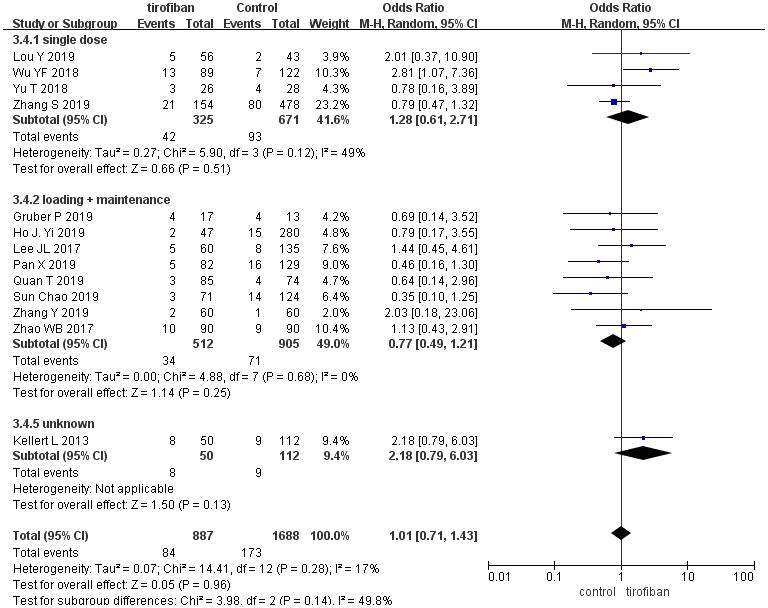 Because some acute ischemic stroke patients are unresponsive to first-line endovascular therapy, adjunctive therapies, including emergent angioplasty and antithrombotic pharmaceuticals, are sometimes essential in promoting recanalization. However, the efficacy and safety of antithrombotic pharmaceuticals such as tirofiban remain largely unknown [15].

Nevertheless, conflicting results have been obtained regarding the safety and efficacy of tirofiban treatment in patients treated with EVT. Kellert et al. found that fatal intracranial hemorrhage increased after tirofiban treatment [14], and Wu YF et al. reported that tirofiban increased sICH risk up to 3-fold when combined with EVT treatment for acute ischemic stroke, especially in the high-dose subgroup [12]. In contrast, tirofiban treatment increased favorable functional outcomes without increasing mortality and sICH both in an observational study [13] and in a recent RCT [16]. Closer examination of mode of administration and dosage might play a crucial role in resolving these conflicting results.

In this meta-analysis, tirofiban treatment had significant benefits in the overall pool of acute ischemic stroke patients treated with EVT, suggesting that the sample sizes examined in previous individual studies may have been too small to detect the efficiency of tirofiban treatment. Our current results suggest that 252 cases in each branch was sufficient and to demonstrate that tirofiban can improve functional outcomes in acute ischemic stroke patients treated with EVT.

Moreover, subgroup analysis showed that standard tirofiban administration (a loading dose followed by maintenance doses) significantly increased favorable functional outcomes compared to a single dose. This difference might be a result of the pharmacokinetics of tirofiban. After the administration of a single dose of tirofiban, plasma concentration measurements indicated a short half-life of 1.4-2.2 hours; that dose failed to prevent thrombogenesis before oral antiplatelets took effect. Furthermore, the indications for tirofiban administration, including multiple retrieval manipulations, residual stenosis, and stent implantation, were independently associated with reocclusion within 24 hours after successful recanalization [28]. This indicates that the risk of reocclusion, and subsequent poorer outcomes, is not reduced by a single dose of tirofiban. Tirofiban therefore may be most effective when administered in an initial loading dose with repeated subsequent maintenance doses to maintain its antiplatelet efficacy.

Assessment of the efficacy of tirofiban in recanalizing vessels was complicated by that fact that, in most studies, it was only administered when first-line EVT failed; baseline vessel patency therefore differed systematically between patient groups treated with or without tirofiban. However, a preliminary single-center RCT with small sample size nevertheless found that tirofiban significantly increased recanalization rates and decreased reocclusion rates [16]. Additional randomized control trials should be carried out to characterize the efficacy and safety of different tirofiban doses in combination with EVT for acute ischemic stroke patients.

Several limitations of the current meta-analysis should be considered when interpreting these results. First, although 13 studies were included, many did not provide sufficient data for subgroup analysis; sample sizes in that analysis were therefore small, especially for the high dose maintenance subgroup. Second, most of the included studies were non-randomized, and selection bias was unavoidable because most patients received tirofiban as a rescue therapy after possible failure of recanalization. This selection bias might artificially decrease the efficacy of tirofiban in improving outcomes and decreasing mortality. Third, data regarding systematic bleeding events that were required to assess the safety of tirofiban were not available in all studies. Finally, most of the included studies were carried out in China, and external validity should be established via an international multi-center RCT.

In summary, the present systematic review and meta-analysis revealed that, compared to EVT alone, combined treatment with EVT and tirofiban significantly improved outcomes without increasing mortality or sICH in acute ischemic stroke patients with large vessel occlusion. Furthermore, our results indicate that a loading dose followed by low-dosage maintenance of tirofiban might be the most effective and safest protocol for improving outcomes in acute ischemic stroke patients treated with EVT, although more comprehensive randomized controlled trials are needed to confirm this finding.

References generated from these searches were imported into the reference manager EndNote X9.3.1 (Thompson Reuters, Philadelphia, PA) and duplicate references were removed. Journal article titles and abstracts were then systematically screened for studies comparing outcomes of interest between EVT + tirofiban and EVT-only patients by 2 neurologists independently according to the following inclusion criteria: (1) randomized controlled trials and observational studies (case-control studies and cohort studies); (2) evaluation of the efficacy and safety of tirofiban on acute ischemic stroke patients treated with EVT. Studies were excluded if they (1) were unpublished studies or conference abstracts; (2) contained duplicate data on patients reported in other studies; (3) lacked outcome data beyond hospitalization; (4) did not report data on both EVT + tirofiban and EVT-only patient groups; (5) were case-series with <10 patients.

Subgroup analysis based on tirofiban dosage and mode of administration

Odds ratios (OR) were calculated for individual studies and pooled according to Mantel-Haenszel random-effect methods (with 95% confidence intervals) using Review Manager 5.3.5 (The Cochrane Collaboration, Denmark). Statistical significance was defined by p ≤ 0.05. A meta-analysis was conducted for each outcome of interest. Significant heterogeneity was defined by both a χ2 value with a p value < 0.10 and an I2 value greater than 50%. Bias due to small study sizes and/or publication bias (i.e. whether studies reporting significant effects are more likely to be published than those reporting no effects) were assessed via visual inspection of funnel plots and a Peters test using Stata 15.0 (Statacorp, USA).

The datasets used and analyzed in the current study are available from the corresponding author upon reasonable request.

All authors declare that they have no conflicts of interest.