Sarcopenia is an age-related syndrome that is characterized by progressive loss of muscle mass, strength and function that reduces quality of life and is accompanied by physical disability [1]. It was officially recognized in 2016 as a specific disease and assigned the diagnosis and staging code, ICD-10-CM (M62.84) [2, 3] The prevalence of sarcopenia is 5-13% among individuals aged 60-70 years [4, 5] and 11-50% among individuals aged above 80 years [6, 7].

Muscle mass varies among people of different racial origin [8], and is influenced by genes [9], hormones [10], and lifestyle [11]. Sarcopenia is defined as by reduction in skeletal muscle mass that is two standard deviations below the average muscle mass of young adults as the reference population [1, 7, 12–14]. As a result, diagnosis and prevalence results of sarcopenia vary significantly between populations because the cut-off values are different. Despite similar socioeconomic backgrounds, there is great variation in body composition as well as muscle mass, strength and performance between individuals of different races [15]. Hence, the cut-off values for the diagnosis of sarcopenia based on muscle mass, strength, and function need to be determined based on ethnicity [16]. Currently, the cut-off points for the diagnosis of sarcopenia are arbitrary due to differences in measurement techniques and reference populations. The European Working Group on Sarcopenia in older people (EWGSOP2) [17] and the Asian Working Group on Sarcopenia (AWGS) in 2014 [12] and 2019 [18] proposed key criteria for the diagnosis of sarcopenia in order to compare results of studies involving individuals from different ethnic backgrounds.

EWGSOP2 used muscle strength as the main parameter for diagnosing sarcopenia, but, evaluation of muscle loss varies considerably based on the instruments and methods that are used [15] Currently, the cut-off points for the diagnostic parameters of sarcopenia are arbitrary because of differences in measurement techniques and reference populations. In China, the parameters proposed by AWGS in 2014 have been used for sarcopenia studies [19, 20]. The prevalence of sarcopenia in older adults is 17% in China compared to 6% in Hong Kong and Taiwan [21].

The cut-off points for determining loss of muscle mass varies significantly in studies conducted in different Chinese populations [5, 22, 23]. Moreover, most of the data regarding sarcopenia is obtained from the elderly individuals and groups, and very few studies have monitored the prevalence of sarcopenia in younger Chinese populations. In particular, the data for muscle mass is not available for young adults. Sarcopenia is common among older adults but can also occur in younger and middle aged individuals. Hence, development of validated cut-off points based on normative data and their predictive value is of high priority [17]. This requires analysis of the relevant diagnostic parameters of sarcopenia in different age groups.

Table 1. Prevalence of sarcopenia in males and females belonging to different age groups according to the 5 diagnostic criteria.

Table 2. Pearson correlation analysis between diagnostic indicators of sarcopenia and age in males and females. 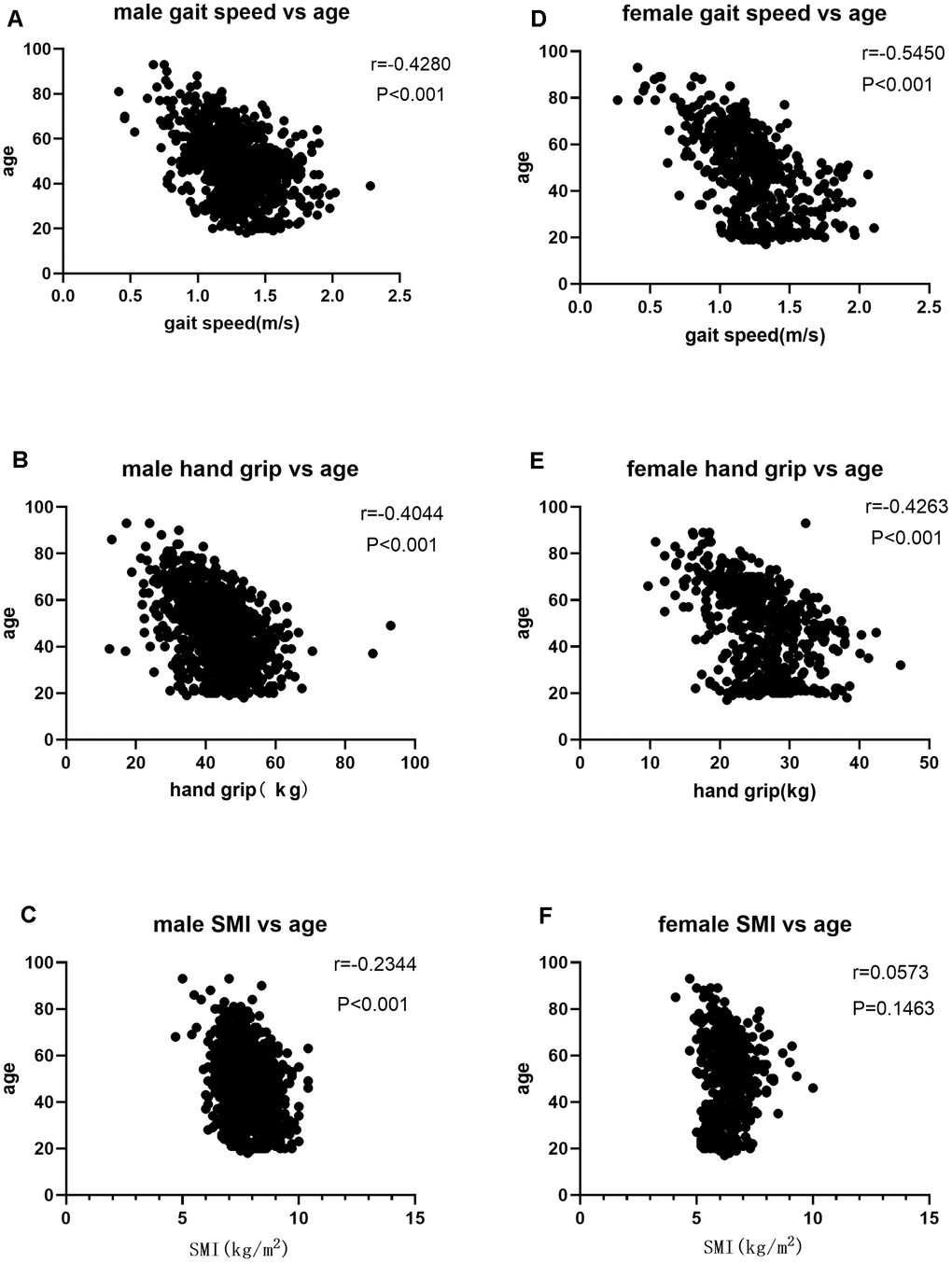 In males, the SMI values gradually decreased with age, and the pair-wise comparisons between young, middle-aged, and elderly age groups were statistically significant (P<0.001, Figure 2A). Moreover, young women and young women with normal BMI showed significantly lower SMIs than the middle-aged women (P < 0.001, Figure 2B, 2C), and lower but statistically similar SMI values than the elderly women (P=0.34 Figure 2, P>0.05, Figure 2B). Hence, young women were not suitable as a reference population for determining the cut-off point to diagnose sarcopenia. 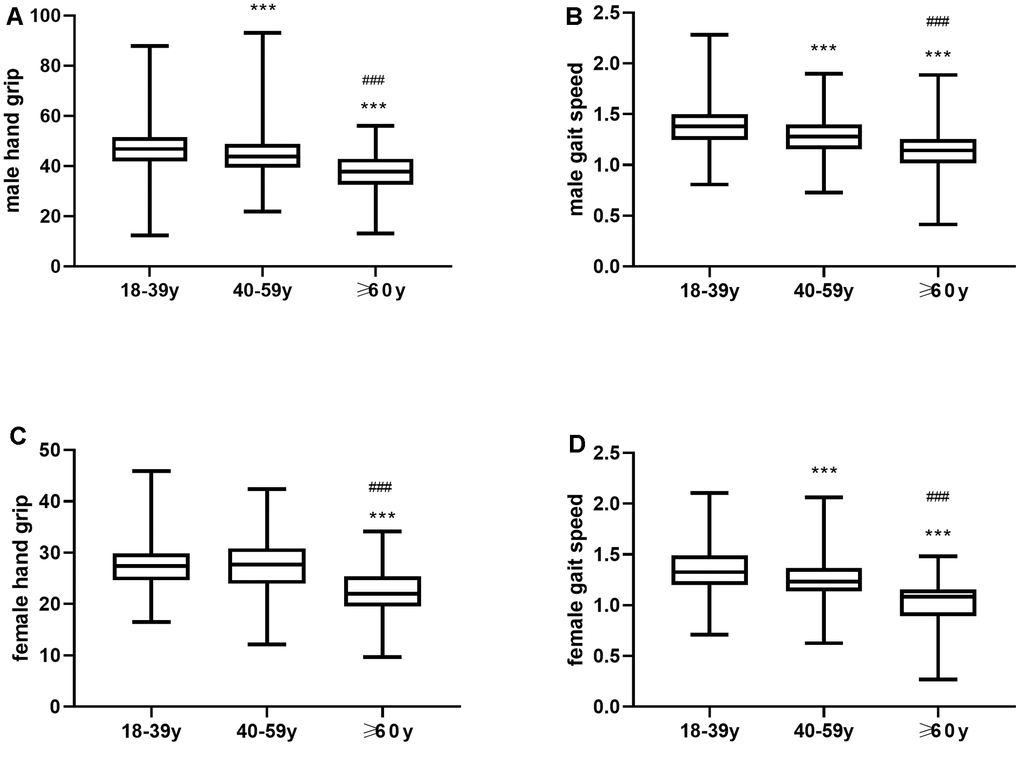 Currently, there is no consensus regarding the diagnostic criteria for sarcopenia. Hence, sarcopenia diagnosis remains a matter of debate with the existence of multiple diagnostic criteria proposed by different medical expert groups. We analyzed 1685 individuals in three different age groups according to 5 diagnostic criteria for sarcopenia. The prevalence was 2.61%-9.72% among those aged over 60, 4.87%-16.37% among those aged over 65, and 18.52%-55.56% among those aged over 80. This demonstrates that the prevalence of sarcopenia increases significantly with age. Our data is consistent with previously reported research [4, 5, 7] and suggests an imbalance between muscle synthesis and degeneration [24, 25]. However, the wide-range of the cut-off points for different diagnostic parameters affects clinical determination of sarcopenia prevalence, especially among women. The cut-off points for the diagnostic parameters are determined based on the normative population data whenever available or from the predictive population data when normative data is not available. We observed that the muscle mass index of the young subjects in our study was lower than that of other Asian populations. These differences suggest that skeletal muscle mass depends on variables such as race, body shape, lifestyle, diet, and cultural background [26–28]. These differences may also be due to insufficient sample size in our study.

Factors such as decreased nutrient intake, low physical activity, and chronic diseases increase the rate of sarcopenia progression [33]. We focused on the muscle mass of young individuals as a reference group to determine the cut-off points. In this study, we recruited healthy young women with a normal BMI and their skeletal muscle index was compared with that of the middle-aged and elderly women [34]. The middle-aged women in our study showed higher muscle mass than the younger women in our study, which was contradictory to previous findings that muscle mass reduces gradually with age. This may indicate that loss of muscle loss may occur during early periods of life in young women. It is also plausible that lifestyle and reduced physical activity may account for lower muscle mass in younger women compared to the middle aged women in our study. Larsson reported that the loss of the larger and faster contracting type II muscle fibers begins with adulthood [35]. The rate of muscle loss is significantly increased in individuals with immobility [36], including those who are immobilized at a young age. [37]. Evidence suggests that sarcopenia begins as early as the 4th decade of life [29, 30, 38]. Therefore, our study demonstrates that it is not suitable to use young subjects as references to determine the SMI (skeletal muscle mass index) cut-off points for sarcopenia.

In addition to the reducing synthesis of muscle protein, increased muscle protein breakdown affects muscle loss in the elderly over 70 [14]. So we chose women aged 60-69 as comparison, it can be seen from Table 3 that the SMI value of women aged 60-69 is higher than that of women aged 18-29 and others (18-39, 30-39, 40-49, 50-59), so 18-59 years old are not significant different statistically. In this study, the women aged 60-69 are more suitable than younger women as the reference population for the muscle mass of elderly women with sarcopenia.

This study has several limitations. Firstly, because of the limited number of samples, we fail to calculate sarcopenia prevalence based on more specfic stratification on gender-age. Secondly, this study was conducted in the coastal cities of the Zhejiang Province in China. Hence, the conclusions of this study may not apply to elderly populations in other regions of China and the world. Finally, there may be significant differences in nutrition and physical fitness of individuals belonging to different age groups, which may have influenced the results of our study. Moreover, generation differences may cause discrepancies among young and elderly individuals that have been selected by random sampling of the same population. Therefore, the cut-off point represented by two standard deviations below the average muscle mass of young adults may not be accurate.

In the future, the cut-off points for the diagnosis of sarcopenia need to be verified in the Chinese population, especially those regarding physical fitness and SMI values. Therefore, we recommend large-scale, multi-center studies in the rural, urban, and inland populations. Another plausible approach to resolve the discrepancies in the SMI values for diagnosing or evaluating sarcopenia in experimental studies is to determine a suitable reference range using the SMI values of healthy elderly individuals (For example, the cut-off points for the abnormal SMI of women is one standard deviations below the mean SMI values in females aged 60-69 years). Furthermore, BMI may not fully reflect the comparable physical status of elderly individuals when compared with middle-aged and younger individuals because of decreased height, reduced muscle mass, and increased fat content. Therefore, we recommend analyzing body composition annually for the elderly and compare changes in their muscle mass over time. Such an analysis can alert patients that are susceptible to sarcopenia when the rate of muscle loss exceeds the threshold range and preventive measures can be taken. We also suggest collecting body composition analysis data of the young and middle-aged individuals in addition to the elderly in order to develop large-scale data to support diagnosis of sarcopenia. In summary, our study shows that the prevalence of sarcopenia increases gradually with age. We also demonstrate that sarcopenia prevalence varies significantly between the five diagnostic criteria used in this study. Moreover, the mean SMI values of young women was lower than the middle-aged women’in this study and was not suitable as a reference population in determining cut-off values for the diagnostic parameters in evaluating sarcopenia.

This observational study included 1685 volunteers aged 18 and above from two communities in the coastal cities of Zhejiang Province, China between September 2018 and June 2019. This included 422 volunteers over 60 from the elderly health monitoring cohort, which has enrolled 20,000 people from 11 cities in the Zhejiang Province and has been followed-up since 2014. 1263 healthy volunteers between 18-59 years were recruited from the same communities. We obtained written consent from all the study subjects. This study was approved by the Ethics Committee of Zhejiang Provincial Center for Disease Control and Prevention. We excluded individuals with cognitive impairment, mental illness, communication inability and cardiac pacemakers.

Muscle strength was measured by estimating the handgrip strength of the main hand twice with a hand-held dynamometer instrument. The higher value was used for analysis.

Physical performance was assessed by estimating the gait speed (GS). The participants walked along a straight path for more than 8 meters at their usual speed and the gait speed was calculated for the middle 6-meter course.

Table 4. Criteria for the diagnosis of sarcopenia.

Jie Huang and Fan He jointly proposed the concept of this research and designed this experiment. Zhendong Tong, Shoushun Chen, Suya Zhong made a positive contribution to the data collectiom. Jie Huang, Xue Gu, have jointly analyzed and interpreted the data. Jie Huang and Suya Zhong have drafted and revised the manuscript.

We thank all the participants for their support in this study. We also thank Jiayan Jiang, Hua Jiang, Fenna Zhang, Weijun Le, and Kefeng Li for their help in data collection and Inbody Company (InBody Co., Ltd, Korea) for its free assistance in technical and equipment support for the body composition analyses.

This work was supported by the Zhejiang Provincial Medical and Health Science and Technology Program (2020RC005).