Copyright: © 2021 Zhuang et al. This is an open access article distributed under the terms of the Creative Commons Attribution License (CC BY 3.0), which permits unrestricted use, distribution, and reproduction in any medium, provided the original author and source are credited.

Galectin-3, a microglia/macrophage-derived inflammatory mediator, plays a role in the stroke progression. In this single-center prospective study, we included 288 consecutive patients with a first-ever acute ischemic stroke to assess the association between galectin-3 serum level and clinical severity at admission and outcome at discharge by univariate and multivariate logistic regression. The results were presented as odds ratios (OR) and 95% confidence intervals (CI). Patients with high severity and poor outcomes had higher serum levels of galectin-3 (P<0.001 and P<0.001). Multivariate analysis suggested that a galectin-3 serum level in the highest quartile (The lowest three quartiles[Q1-3] as the reference) was associated with poor functional outcome (OR, 3.15; 95% CI, 2.44–3.87). The AUC (standard error) for the NIHSS and the combined model were 0.764 (0.031) and 0.823 (0.027), corresponding to a difference of 0.059 (0.004). This study shows that higher serum levels of galectin-3 are associated with stroke severity at admission and stroke prognosis at discharge in ischemic stroke.

Galectins are an ancient lectin family, and galectin-3 is a structurally unique member [1]. Galectin-3 is involved in many pathophysiological conditions [1], including metastasis [2], inflammation reactions [3], immunity [4], and cancer [5]. The role of Galectin-3 in the development and progression of heart failure [6] has been reported. Another study found that galectin-3 could be used as a biomarker to assess heart failure patients [7]. Furthermore, one study showed that as a macrophage-derived mediator, galectin-3 could induce cardiac fibroblast proliferation and ventricular dysfunction [8].

Stroke is one of the main causes of physical and cognitive impairment in China [9]. Inflammatory mechanisms have a role in the pathogenesis of ischemic stroke [10], and inflammatory cytokines have been implicated in adding to the progression of ischemic stroke [11, 12]. Galectin-3 was a microglia/macrophage-derived inflammatory mediator [13]. One study showed that the galectin-3 serum levels were associated with large artery atherosclerotic stroke [14]. A review study showed that galectin-3 was a prognostic marker and therapeutic target in cerebrovascular disease [15]. In this single-center prospective study, we included 288 consecutive patients with a first-ever acute ischemic stroke to assess the association between galectin-3 serum level and both clinical severity at admission and outcome at discharge.

As shown in Figure 1, 398 Patients with ischemic stroke were screened, and 288 patients with blood samples were analyzed at discharge (110 were excluded: 58 with the onset of symptoms >48hours, 6 with tumors, 10 with liver and kidney dysfunction, 8 with infectious diseases, 3 with autoimmune diseases, 10 with no informed consent, 8 without blood at admission, 5 Transfer to another hospital and 2 withdrawal). However, the baseline characteristics [age (P=0.18), BMI(P=0.37), sex (P=0.43) and NIHSS (P=0.09)] of those included patients were similar with the overall cohort(n=398). 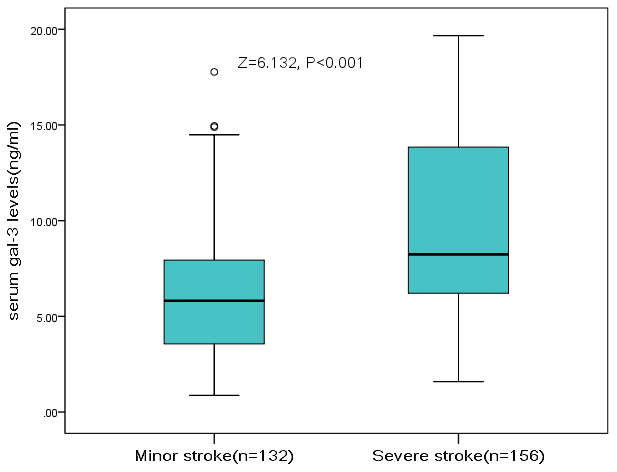 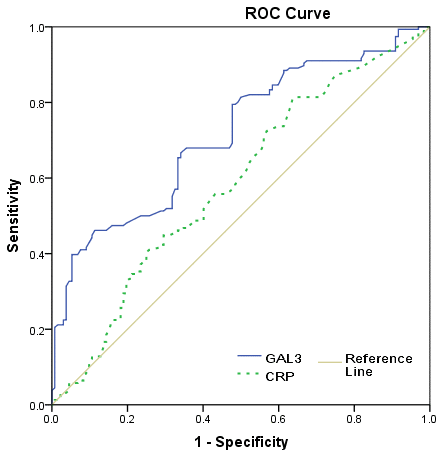 Figure 3. Receiver operating characteristic (ROC) curve was utilized to evaluate the accuracy of serum level of galectin-3 to diagnose severe stroke. High clinical severity was defined as a NIHSS >5.

Univariate and multivariate logistic analysis was used to analyze serum galectin-3 with moderate-to-high stroke severity at admission. In univariate analysis, the galectin-3 level had a strong association with high seriousness, and the risk increased 24% for one-unit(ng/ml) level increasing (OR, 1.24; 95%CI, 1.16-1.33; P<0.001). In multivariate analysis, galectin-3 remained a high stroke severity predictor with an adjusted OR of 1.16 (95% CI, 1.08–1.22; P<0.001), after adjusted for demographic characteristics, clinical findings at admission, vascular risk factors, stroke subtype, and serum levels of CRP and FSG. 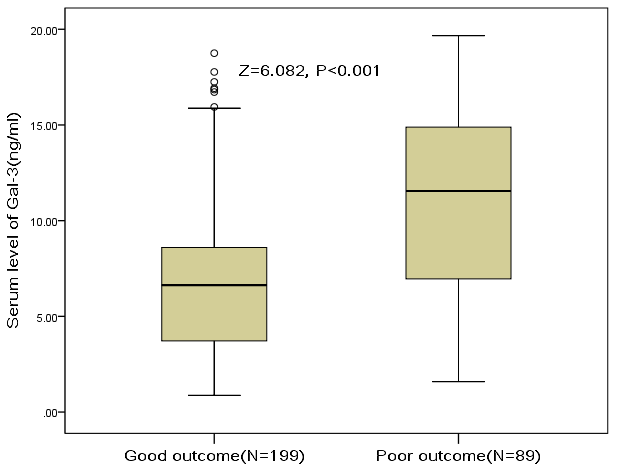 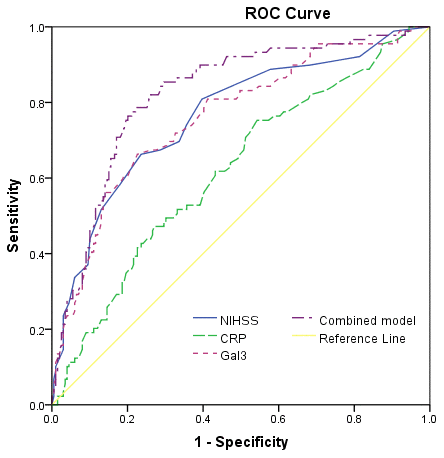 Logistic regression analysis was used to analyze the association of serum galectin-3 with stroke prognosis at discharge. The multivariable model included demographic characteristics, clinical findings at admission, vascular risk factors, NIHSS at admission, stroke subtype, acute stroke treatment, and serum levels of CRP, FSG, and galectin-3. Galectin-3 level had a strong association with poor stroke prognosis and unadjusted and adjusted risk increased 25% (OR, 1.25; 95%CI, 1.17-1.33; P<0.001) and 14% (OR, 1.14; 95%CI, 1.07-1.22; P<0.001), respectively for per unit(ng/ml) level increasing. As shown in Table 3, a Galectin-3 serum level in the highest quartile (The lowest three quartiles[Q1-3] as the reference) was associated with a higher risk of poor prognosis (OR, 3.15; 95% CI, 2.44–3.87; P<0.001).

Finding useful blood biomarkers for predicting stroke prognosis is of great significance for the precise treatment of this disease. In this prospective study, the data shows that higher serum levels of galectin-3 are associated with stroke severity at admission and stroke prognosis at discharge in ischemic stroke. This association is independent of other factors, including age, NIHSS, and CRP. Also, as an independent prognostic marker, galectin-3 could improve the predictive efficiency of the NIHSS score.

Stroke already has some scores that predict outcomes, such as NIHSS that assesses stroke non-invasively and is also very accurate (both sensitive and specific) [16, 17]. However, in this study, we showed that galectin-3 perform better than NIH score and are additionally useful in predicting the severity and prognosis of ischemic stroke.

The prognostic value of galectin-3 for stoke patients had also been affirmed in previous studies. Wang et al. [18] reported that higher galectin-3 serum levels were related to increased risk of death or major disability in ischemic stroke during the 3-month follow-up. Zeng et al. [19] found that high serum galectin-3 levels were related to increased risk of the poor functional outcome and recurrence events in ischemic stroke patients with hyperglycemia. Yan et al. [20] found that high galectin-3 plasma levels were related to poor prognosis in acute intracerebral hemorrhage. This association also had been confirmed in patients with traumatic brain injury [21]. Furthermore, the prognostic value of plasma levels of galectin-3 in aneurysmal subarachnoid hemorrhage(aSAH) [22] and non-severe aSAH [23] had been suggested. Besides, one study showed that galectin-3 was associated with cardiovascular death in coronary artery disease patients [24].

Mostacada et al. [25] reported that the lack of galectin-3 had a role in the inflammatory process triggered by spinal cord injury (SCI) in a C57BL/6 wild-type and galectin-3 knockout mice model. A review showed that galectin-3 released by activated microglia could participate in brain immune responses [26]. Yip et al. [27] showed that the administration of neutralizing antibodies against galectin-3 exerted a neuroprotection role in the hippocampus after head injury.

The prognostic value of galectin-3 in stroke might be involved in the Inflammation pathway. The inflammatory mechanism played a role in necrotic brain injury in stroke patients, and anti-inflammatory strategies had been suggested for treatment [34]. galectin-3 could initiate a toll-like receptor 4 (TLR4)-dependent inflammatory response in microglia, and Gal3-TLR4 interaction had been proposed [35]. Cheng et al. [36] reported that stroke could trigger major and peripheral galectin-3 release leading to enteric neuronal loss through a TLR4 mediated mechanism involving AMPK and TAK1 signaling path permanent middle cerebral artery occlusion model. Furthermore, galectin-3 was a central upstream regulator of the microglial immune response, and it could drive pro-inflammatory activation of microglia in Alzheimer's disease [37]. Galectin-3 was a prominent contributor to the pathology of atherosclerotic plaque progression by amplification of key pro-inflammatory molecules [38]. Doverhag et al. [39] found that galectin-3 caused neonatal hypoxic-ischemic brain injury through the inflammation pathway. Second, Microglia/macrophages are involved in the defense against brain damage [40]. Galectin-3 could lead to macrophage and fibroblast proliferation and fibrosis [41]. Lastly, one study found that galectin-3 was up-regulated in delayed neuronal death, and hypothermia could prevent galectin-3 up-regulation [42].

Some limitations should be acknowledged. First, we only collected serum samples at admission. We could not assess when and how long galectin-3 was changed in stroke patients. We also could not confirm the level of galectin-3 in the cerebrospinal fluid (CSF). One study found that the CSF levels of galectin-3 were increased after birth asphyxia and might contribute to injury [43]. Second, the causality conclusion could not be confirmed in this study, and whether lowering blood concentration of galectin-3 could improve the prognosis of stroke patients requires further research. A previous study showed that modified citrus pectin (a galectin-3 inhibitor) prevented mouse post-subarachnoid hemorrhage blood-brain barrier disruption, possibly inhibiting galectin-3 [44]. Third, long-term follow-up, such as 3-month and 12-month, were not included. Interestingly, the prognostic value of galectin-3 in 3-month [18] and 12-month [19] in the ischemic stroke patients had been reported. Lastly, the data derived from a single-center small sample study must be verified in future large sample multicenter studies.

This study shows that higher serum levels of galectin-3 are associated with stroke severity at admission and stroke prognosis at discharge in ischemic stroke. This association was independent of other factors, including age, NIHSS, and CRP. Future studies assess pathways of lowing galectin-3 may lead to new targets for improving the prognosis of ischemic stroke.

From December 2017 to December 2019, all first-ever ischemic stroke patients admitted to Weifang People’s Hospital, China, were included according to the World Health Organization criteria [45] and with symptom onset within 48 hours. Disease clinical diagnosis was confirmed by computer tomography (CT), and/or magnetic resonance imaging (MRI). Patients with tumors, liver, and kidney dysfunction, infectious and autoimmune diseases, were excluded.

On admission, we use standard questionnaires to collect clinical information. That information included age, gender; vital signs; medication before stroke; systolic blood pressure (SBP) and diastolic blood pressure(DBP); smoking and drinking history; hypertension; hyperlipidemia; diabetes mellitus; atrial fibrillation; cardiovascular diseases; previous transient ischemic attack and family history of stroke. Also, acute treatment information (IV thrombolysis and/or mechanical thrombectomy) was also recorded. The severity of stroke was also assessed by a stroke neurologist (Dr. ZHOU) according to the National Institutes of Health Stroke Scale (NIHSS) score (From 0 to 42, the higher the score, the more serious of the disease) [46]. Stroke cause was classified by the original TOAST classification (Trial of Org 10172 in Acute Stroke Treatment), which including large-artery arteriosclerosis stroke; cardiac embolism; small-artery occlusion stroke; other ischemic strokes; and ischemic stroke of undetermined cause [47].

The continuous variables of study patients were described by mean (standard deviation, SD) or median (interquartile range, IQR) according to whether the data were normally distributed. Data were expressed as percentages(percentage) for categorical variables. The association between galectin-3 serum level and both clinical severity at admission and outcome at discharge was assessed by univariate and multivariate logistic regression. The results were presented as odds ratios (OR) and 95% confidence intervals (CI). Serum leptin levels were categorized into quartiles, and the highest quartile(Q4) was compared to the other three quartiles (as the reference). A minor stroke at admission was defined as NIHSS <5, while moderate-to-high clinical severity was defined as NHISS>6 [50].

Each biomarker’s discriminatory value was also calculated as the area under the curve (AUC) of the receiver operating characteristic (ROC) curves. SPSS 24.0 software (SPSS Inc, Chicago, USA) was used to assess all statistical analyses, and P < 0.05 was defined as significance.

The Human Research Ethics Committee (HREC) of Weifang People’s Hospital checked and authorized this study plan and protocol. Written informed consent should be obtained from patients before they participate in the research.

We are grateful to all patients who participated in our study. The authors also acknowledge the contribution of reviewers who help us to improve the quality this manuscript.