Nutrition status mediates the association between cognitive decline and sarcopenia

Sarcopenia is significantly associated with cognitive decline and nutrition status

Nutrition status mediates the association between cognitive decline and sarcopenia

Table 2. Associations between cognitive status and sarcopenia in older adults. 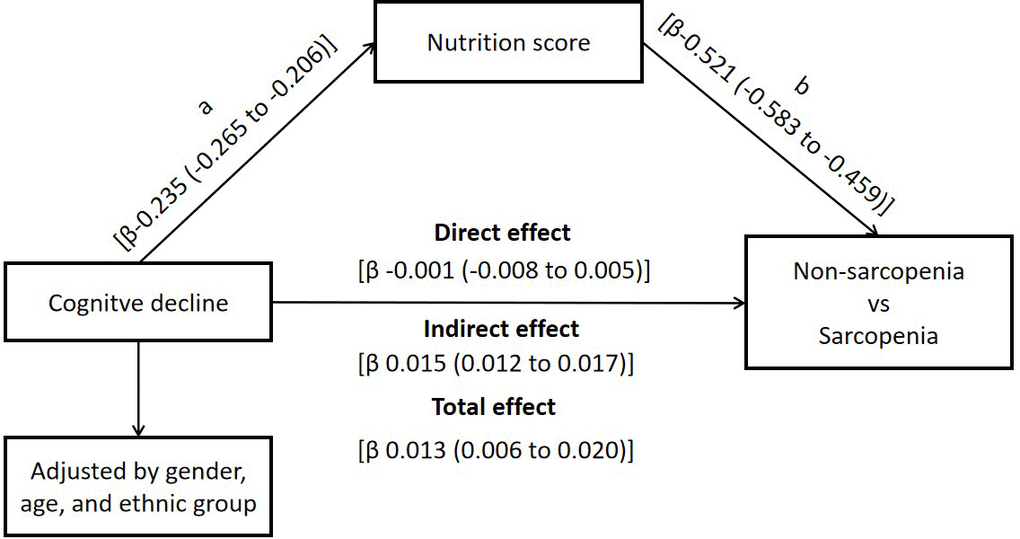 Figure 2. Nutrition status as mediator of the effect of cognitive decline on sarcopenia.

The overall prevalence of sarcopenia in our study population was 18.2% based on the AWGS 2014 diagnostic criteria. This was higher than the previously published meta-analysis by Tian et al., which reported a sarcopenia prevalence of 11% in community-dwelling Chinese individuals aged 60 years and older [10]. The higher prevalence of sarcopenia in this study may be due to several reasons. Firstly, the higher prevalence of sarcopenia might be related to the poor economic status of our study subjects in rural west China. Dorosty et al. reported that the odd risk of sarcopenia was more likely 0.97 times higher in the lower socioeconomic class compared to those in the middle- and high-income classes [11]. Secondly, most of the study subjects in our study were farmers who lived alone and showed poor sleep quality and lower education levels. These factors are well recognized risk factors of sarcopenia [6]. Thirdly, the participants in our study belonged to various ethnicity groups, including Zang, Qiang, Yi and others. Most of them lived in huge mountainous regions and vast grasslands where medical resources were poor. Moreover, people living in these areas did not pay attention to their health. As a result, chronic disease burden was high in these ethnicity groups and potentially contributed to the higher prevalence of sarcopenia. It is also plausible that the AWGS 2014 diagnostic criteria were not optimal for this group of study subjects. Therefore, in the future, specific cutoff points based on the local factors need to be taken into account while diagnosing sarcopenia. Our study included 4500 participants with 2873 women and 1627 men. The prevalence of sarcopenia in men was higher than women in our study (21.5% vs. 16.4%). Previous studies have shown that women are more prone to sarcopenia than men because of hormonal levels such as estrogen, androgen, cortisol and so on [12]. However, our study was consistent with a previous meta-analysis by Tian et al., which reported that the prevalence of sarcopenia in elderly Chinese men was 1.5 times higher than women [10]. Another possible reason for this trend could be that the mean age of men in our study was higher compared to the women (63 years vs. 61 years).

The relationship between cognitive decline and sarcopenia is complex and bidirectional, and most likely regulated by several mechanisms. Firstly, older adults with cognitive decline demonstrate reduced physical activity and dietary intake, which triggers excessive muscle loss and accelerates sarcopenia [17]. Secondly, increased levels of pro-inflammatory factors interleukin-6 (IL-6) and tumor necrosis factor-α (TNF-α) are reported in patients with sarcopenia [18] and Alzheimer's cognitive impairment [19]. Thirdly, products of oxidative and nitrosative stress accumulate during aging and promote cognitive impairment [20]. Excessive oxidative stress alters the homeostatic balance between protein synthesis and breakdown, induces mitochondrial dysfunction and apoptosis, all of which promotes age-related muscle atrophy and eventually sarcopenia [21]. Furthermore, aberrant changes in the levels and activity of neurotransmitters in the central nervous system and inadequate distribution of oxygen to the brain in cognitive impaired individuals reduce muscle activity and contribute to sarcopenia [22].

In our study, we demonstrated that nutrition status is a critical mediator of the relationship between cognitive decline and sarcopenia. The mediation model and SEM framework pathway analyses showed that indirect effects of cognitive decline on sarcopenia were significant (β = 0.015; 95% CI: 0.012 to 0.017) after adjusting for age, sex, and ethnicity, but the direct effects of cognitive decline on sarcopenia were not statistically significant when analyzed in combination with nutrition status (β = -0.001; 95% CI: -0.008 to 0.005). This suggested that nutrition status mediated the association between cognitive decline and sarcopenia. Besides, SEM framework pathway analysis confirmed the results of the mediation analysis. There are several plausible explanations for our findings. Firstly, there is a close relationship between cognitive decline, nutrition status, and sarcopenia. Kang et al. demonstrated that nutritional deficiency in early life was associated with age-related cognitive decline [23]. Assis et al. reported that early identification of malnutrition through nutritional assessments helped prevent cognitive impairment in many cases [24]. Moreover, malnutrition promotes chronic low-grade inflammation, as observed in the malnutrition-inflammation-complex syndrome (MICS) [25]. Therefore, malnutrition promotes cognitive decline, which further increases the risk of sarcopenia and affects the daily living activities in the elderly [24]. Secondly, the earliest signs of cognitive decline include reduced ability to prepare food, forgetting to eat, and inability to access food, all of which can impair oral food intake and result in malnutrition [26]. Thirdly, our findings confirm previous reports that show that individuals with sarcopenia are associated with worse nutritional status [27] and cognitive decline [28]. Consequently, improving nutrition levels in older adults can maintain muscle mass and prevent sarcopenia. Cerri et al. reported that sarcopenia was highly prevalent in a population of hospitalized elderly individuals that were malnourished or at risk of malnutrition and was associated with increased risk of short-term mortality [29]. Malnutrition is characterized by muscle atrophy and overall decline in body muscle mass [30]. Skeletal muscle tissue constitutes majority of the protein-rich lean body mass and its atrophy significantly reduces muscle strength as shown by reduced hand grip strength (HGS) and muscle strength [31].

There are several limitations in this study. For example, smaller sample size, characteristics of the study population such as most participants in our study were relatively healthy, study design was cross-sectional study, and type of sampling did not cover all the cities in west China. All of these are potential source of bias. Another limitation of our study is that we used BIA alone to assess body composition of the study subjects. EWGSOP reviewed several tools to evaluate body composition and identified dual-energy X-ray absorptiometry and BIA as the most suitable techniques to clinically determine body composition of our study subjects. However, we conducted a centralized investigation and not a household survey. Hence, most of the participants who came to the site of investigation on their own were relatively healthy. This may have affected the actual determination of sarcopenia prevalence in the study community. However, we analyzed sufficient samples that allowed evaluation of regression models after optimally adjusting for multiple confounding factors. Moreover, the results of our study were similar to previous reports, thereby demonstrating robustness of our analysis.

We performed this analysis using data from the West China Health and Aging Trend (WCHAT) study, which was conducted in accordance with the 1964 Declaration of Helsinki guidelines and its later amendments. The research was approved by the Ethical Review Committee of West China Hospital (Committee reference number: 2017(445); Registration number: ChiCTR 1800018895). Previous reports have published details of the surveys used to generate this data [27, 28, 32]. The data was collected from Yunnan, Guizhou, Sichuan, and Xinjiang provinces in West China. The enrolled participants were 50 years and older. We obtained written and signed informed consent from all participants. The base-line response rate derived from multi-stage cluster sampling was 50.2%. Initially, we recruited 7536 community-dwelling multi-ethnic residents for this study. Among these, 4500 participants were eligible for further analysis of sarcopenia characteristics based on the bioelectrical impedance analysis (BIA). Finally, 4023 participants were included for analysis after excluding 467 participants for not completing nutrition status assessment and another 10 participants for not completing cognitive assessment. The data was collected using face to face and one-on-one personal interviews conducted by medical students who were trained to interview study subjects and collect the questionnaire data. Other anthropometric and bioimpedance measurements were collected by trained technicians.

Sarcopenia was measured according to the AWGS 2014 diagnostic criteria by assessing muscle mass, muscle strength, and physical performance [33]. Bioelectric Impedance Analysis (BIA) was performed to determine muscle mass using the INbody770 body composition instrument [34]. The cut-off value for the appendicular skeletal muscle mass index (ASMI) was 7.0 kg/m2 in men and 5.7 kg/m2 in women [33].

Grip strength was measured with a grip dynamometer (EH101; Camry, Zhongshan, China). During the grip strength test, subjects held the grip dynamometer with their dominant hand, stood upright, kept their feet separated (shoulder-width apart), and let their arms droop naturally. The test was performed twice independently and the largest value was used for the final analysis. The cut-off grip strength value was 26 kg in men and 18 kg in women [33].

Physical performance was determined by measuring gait speed with an infrared sensor. The acceleration phase was strictly excluded from the walking time. During the test, subjects wore common shoes and could use mobility aids, but were not assisted by others. The cut-off value of gait speed was 0.8 m/s13.

Evaluation of other clinical parameters

Statistical analysis was performed using the R software (version 4.0.2). Kolmogorov-Smirnov test was used to determine normalized distribution of variables. The baseline data are presented as means± standard deviation (SD) or frequencies. The differences between groups were analyzed by one-way analysis of variance (ANOVA) for continuous variables and chi squared test for categorical variables. The association between cognitive score and sarcopenia was analyzed by binary regression using four separate models in which cognitive decline was plotted as the predictor variable and sarcopenia categories were plotted as the outcome variables. The four models were as follows: (1) Model 1 adjusted by sex, gender, and ethnic groups; (2) Model 2 adjusted by Model 1 + life styles (smoking, drinking alcohol and drinking tea), and sleep quality; (3) Model 3 adjusted by Model 2 + chronic disease comorbidity, depression and anxiety; (4) Model 4 adjusted by Model 3 + nutrition status. The role of nutrition status in cognitive decline and sarcopenia was analyzed using the Mediation package in R (version 4.0.2) [40]. Mediation hypotheses were adjusted for age, sex, and ethnicity using bias-corrected bootstrap method with 4023 samples to calculate confidence intervals (95%). P < 0.05 was considered statistically significant. The effect was considered indirect if the confidence interval did not include zero. The SEM pathway analysis was performed with the SEM package in R (version 4.0.2) [41].