Laryngeal squamous cell carcinoma (LSCC) is one of the most common cancers and belongs to the head and neck malignancies [1]. LSCC accounts for over 95% of laryngeal tumors. And a huge number of cancer-related deaths are induced by LSCC every year in the world [2]. Unfortunately, its incidence is still increasing. Although LSCC patients are treated by surgery, radiotherapy and chemotherapy, their prognosis remains very unsatisfactory [3]. The mechanism underlying LSCC recurrence and metastasis is largely unclear. At present, there is a very urgent need to identify novel therapeutic targets for LSCC patients.

LINC01638 has been reported to be involved in the progression of several cancers, such as pancreatic ductal adenocarcinoma, non-small cell lung cancer, breast cancer and colorectal adenocarcinoma [10–13]. However, the role of LINC01638 in LSCC remains largely unknown. This study aimed to determine the functional mechanism of LINC01638 in LSCC. We found that LINC01638 was upregulated in LSCC tissues and contributed to LSCC progression through modulating miR-523-5p/BATF3 pathway. Our findings suggested that LINC01638 may be a novel therapeutic target for LSCC treatment. 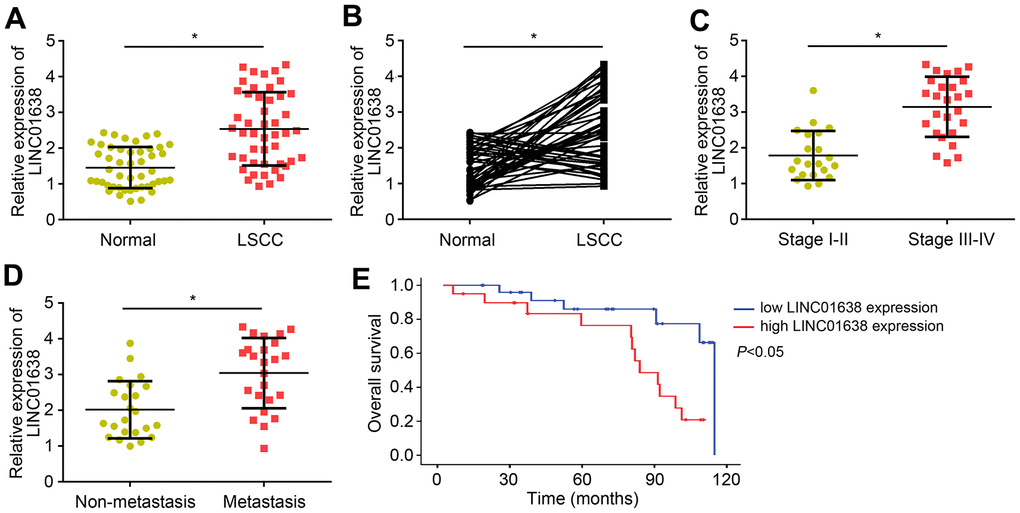 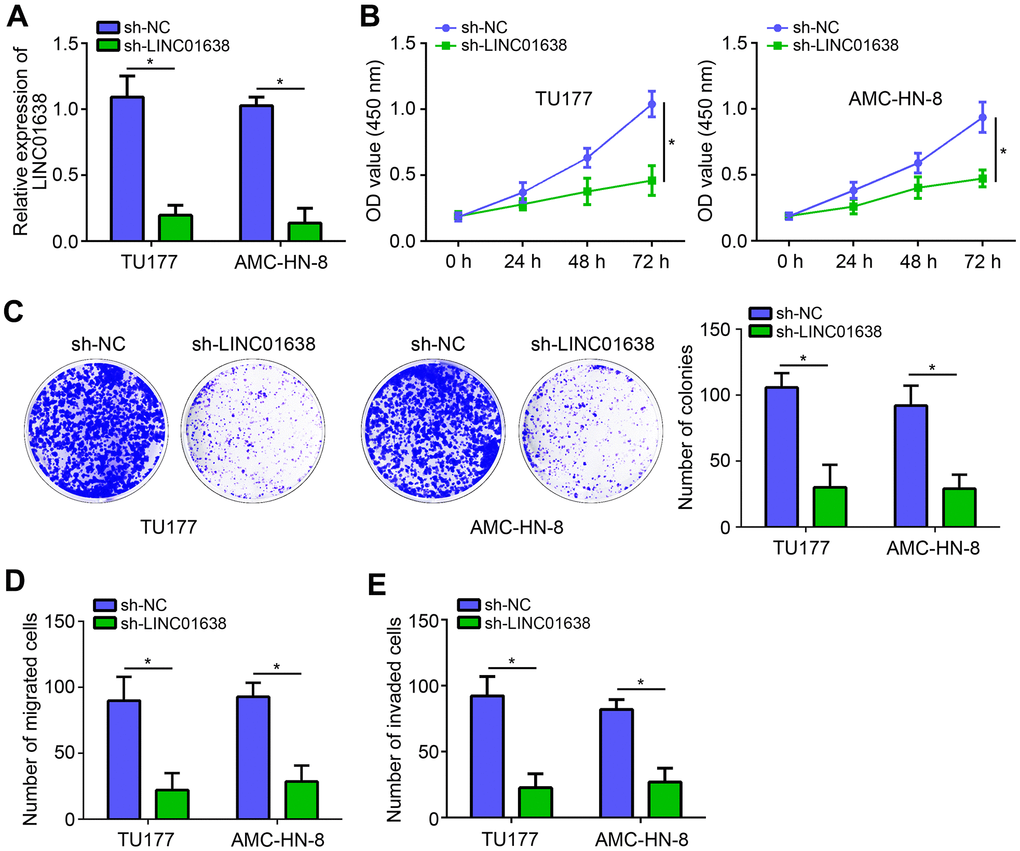 To investigate the molecular mechanism of LINC01638, we firstly analyzed its subcellular location by qRT-PCR. Results showed that LINC01638 was located in the cytoplasm (Figure 3A), indicating LINC01638 may be a miRNA sponge. Using bioinformatics analysis (miRDB online tool), five most potential candidates were identified. However, luciferase reporter assay showed that only miR-523-5p mimics inhibited the luciferase activity of LINC01638 (Figure 3B). Thus, we selected miR-523-5p for further validation. Mutant-LINC01638 (LINC01638-MUT) luciferase reporter vector was constructed (Figure 3C). Luciferase reporter assay validated the above conclusion again (Figure 3D). RIP assay further suggested that LINC01638 interacted with miR-523-5p (Figure 3E). Besides, we found that miR-523-5p expression was increased after LINC01638 knockdown (Figure 3F). Afterwards, it was observed that there was a negative correlation between LINC01638 and miR-523-5p expressions in LSCC tissues (Figure 3G). 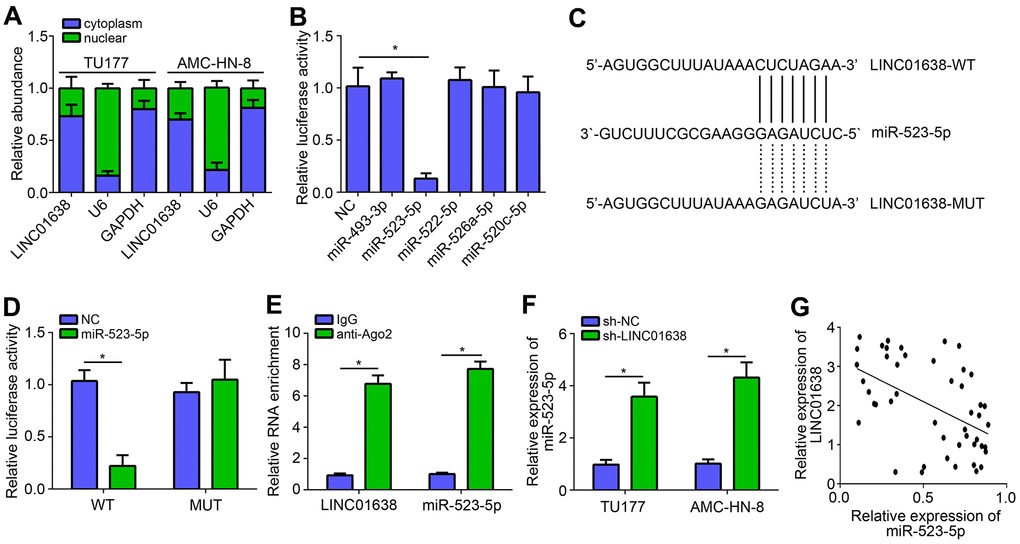 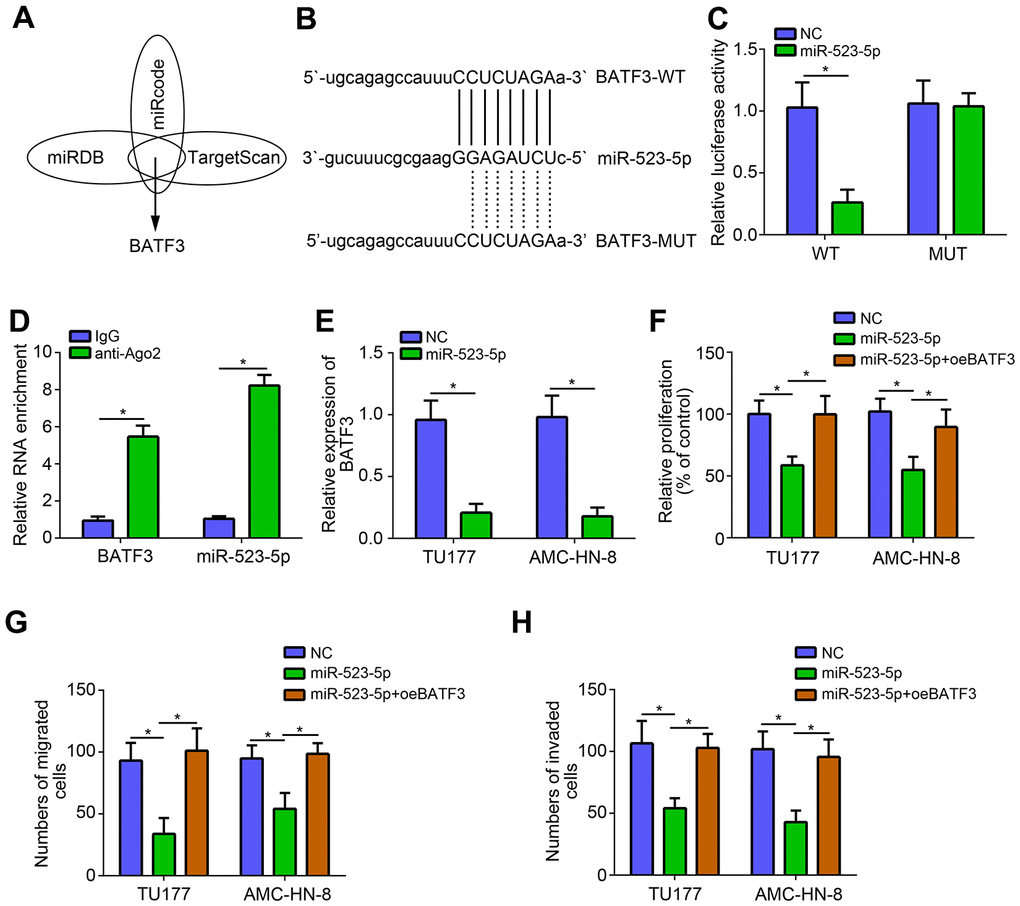 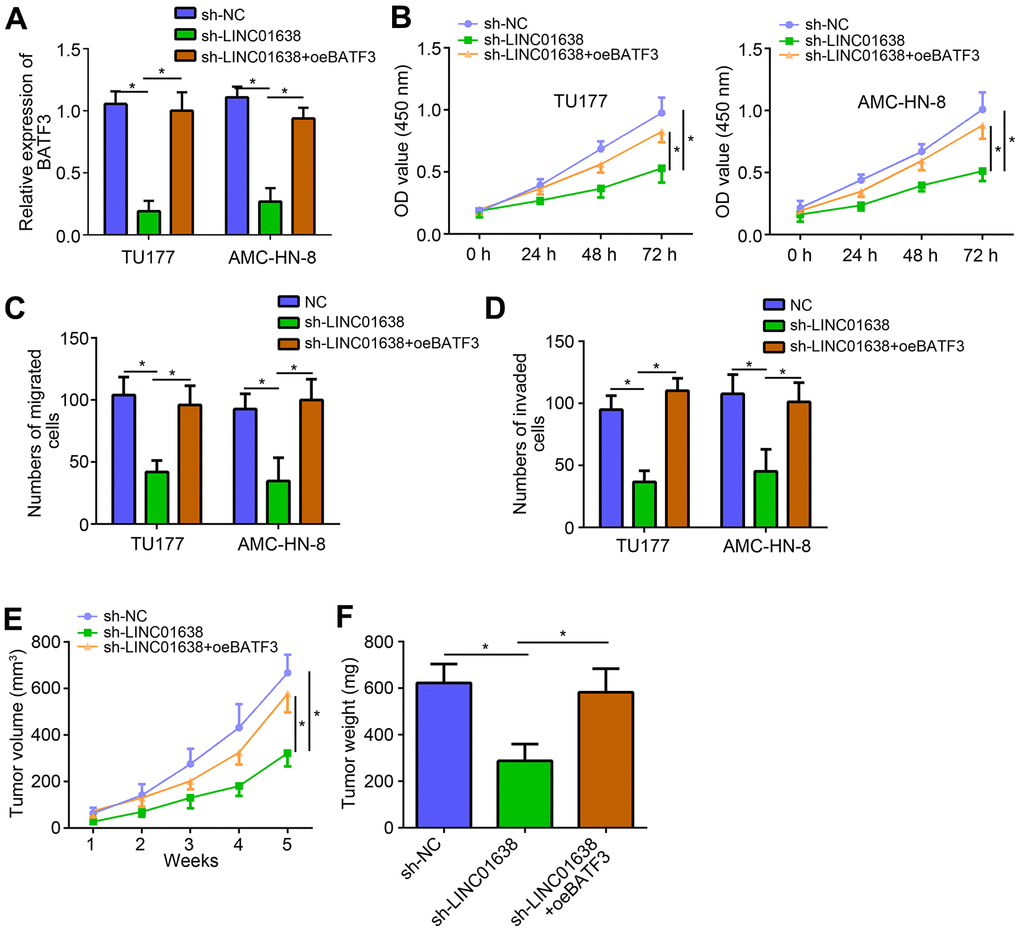 Increasing studies have supported the essential roles of lncRNAs in tumorigenesis, including LSCC. For example, lncRNA ST7-AS1 enhances proliferation, migration and invasion of LSCC through increasing the stability of CARM1 [14]. LncRNA PVT1 contributes to growth and invasion of LSCC through sponging miR-519d-3p [15]. LncRNA RGMB-AS1 facilitates the proliferation, migration and invasion in LSCC through modulating miR-22/NLRP3 pathway [16]. Therefore, it is important to make efforts to illustrate the molecular mechanism of lncRNA in LSCC progression, which will benefit the development of therapeutic targets.

Growing researches have demonstrated that LINC01638 interacts with miRNA to regulate tumorigenesis [6, 16]. For instance, lncRNA ZEB2-AS1 sponges miR-6840-4p to facilitate LSCC progression [20]. LncRNA NEAT1 enhances LSCC development by targeting miR-107/CDK6 axis [21]. Whether LINC01638 could be a sponge for miRNAs remains unclear. In our study, we found that LINC01638 was mainly expressed in the cytoplasm of LSCC cells. Through bioinformatics analysis, we identified several potential target miRNAs. We utilized luciferase reporter assay and RIP assay to demonstrate that LINC01638 interacted with miR-523-5p. Until now, miR-523-5p function has not been illustrated. Our results showed that miR-523-5p level was suppressed by LINC01638. And miR-523-5p mimics suppressed the proliferation, migration and invasion of LSCC cells, indicating that miR-523-5p is an anti-tumor miRNA.

The lncRNA-miRNA-mRNA regulatory axis has been widely acknowledged in cancer [21]. There is no report about the target of miR-523-5p. Through bioinformatics analysis, we identified that miR-523-5p may target BATF3. We then validated their binding through luciferase reporter assay and RIP assay. Besides, we found that BATF3 expression was inhibited by miR-523-5p. Moreover, BATF3 expression was decreased after LINC01638 silencing. And miR-523-5p inhibition rescued BATF3 expression. We demonstrated LINC01638 inhibited miR-523-5p to facilitate BATF3 expression. BATF3 is involved in several cancers, such as colorectal cancer, glioma and lymphoma [22–24]. The role of BATF3 in LSCC is elusive. In this research, we found that BATF3 overexpression restored the proliferation, migration and invasion of LINC01638-silenced LSCC cells in vitro and in vivo. Therefore, BATF3 promotes LSCC progression.

For migration assay, cells were seeded into the non-Matrigel-coated upper chambers (8 μm pore; Corning Costar, Corning, NY, USA) with serum-free medium. The lower chamber was filled with FBS-containing medium. Cells were cultured for 24 h. Then migrated cells in the lower chamber was fixed with 70% ethanol and stained with 0.1% crystal violet. Cell numbers were finally counted using a light microscope. For invasion assay, cells were seeded into Matrigel-coated upper chambers and other steps were the same as migration assay.

The sequences of LINC01638 and BATF3 were inserted into pMIRGLO reporter vector (Promega). For luciferase reporter assay, the luciferase reporter and miR-523-5p mimics were transfected into TU177 cells and cultured for 48 h. Then the relative luciferase activity was measured using the Dual-Luciferase Reporter Assay System (Promega) according to the manufacturer’s protocol.

5-week-old female nude (BALB/c-nude) mice from Charles River (Beijing, China) were randomly divided into three groups (5 mice per group). Then TU177 cells (5×106) were subcutaneously injected into the right flanks of the mice. Tumor volumes were measured every week. After 5 weeks, tumor weights were examined. The animal experiment was approved by the ethics committee of Shengjing Hospital of China Medical University.

The results were analyzed by GraphPad Prism version 6 and expressed as the means ± standard deviation. The differences between 2 groups were analyzed with the Student’s t-test. Differences between >2 groups were determined by one-way ANOVA followed by Tukey’s post hoc test. Pearson’s correlation analysis was utilized to determine expression correlation in tumor tissues. P<0.05 was considered to indicate a statistically significant difference.

Hang Zhang designed the project and performed the experiments. Xudong Zhao and Mengmeng Wang analyzed the data. Wenyue Ji initiated the study and wrote the paper.