The 2017 ACC/AHA stage 1 hypertension is associated with arterial stiffness: a prospective analysis

Objective: To examine the association between stage 1 hypertension defined by the 2017 American College of Cardiology and American Heart Association (ACC/AHA) guideline and risk of developing arterial stiffness.

Methods: During 2010-2015, 4595 adults aged ≥40 years without cardiovascular disease were followed up for a median of 4.3 years. BP levels at baseline were categorized into normal, elevated, stage 1 hypertension, and stage 2 hypertension. The development of arterial stiffness was defined as a normal brachial-ankle pulse wave velocity (ba-PWV) at baseline and an increased ba-PWV at follow-up.

High blood pressure (BP) contributes to atherosclerosis and increases the risk of cardiovascular disease (CVD). In 2017, the American College of Cardiology and the American Heart Association (ACC/AHA) redefined hypertension as BP levels ≥130/80 mmHg and BP levels 130~139/80~89 mmHg which were regarded as ‘high-normal’ previously, were classified as stage 1 hypertension [1]. However, this definition was not embraced by other guidelines, such as the 2018 European Society of Cardiology/European Society of Hypertension (ESC/ESH) guidelines and the 2020 International Society of Hypertension (ISH) Global Hypertension Practice Guidelines [2–4]. Therefore, whether BP levels 130~139/80~89 mmHg should be defined as hypertension warrants investigation. Subsequent studies have reported significant associations between ACC/AHA stage 1 hypertension and risks of CVD events in long-term population-based cohorts [5–7], providing strong evidence and justification for the definition of ACC/AHA stage 1 hypertension in these populations for an early intervention.

Pulse wave velocity (PWV) was proposed as a method to assess arterial stiffness in 2003 [8] and has been widely accepted in cardiovascular studies [9]. Arterial stiffness defined by an increased PWV was considered a prelude to clinical atherosclerosis and was related to higher CVD risks. An individual participant meta-analysis revealed that PWV could predict future CVD events independent of conventional risk factors [10]. Brachial-ankle PWV (ba-PWV) is measured by brachial and tibial arterial wave analyses and previous studies have demonstrated significantly higher risks of CVD occurrence in association with increased ba-PWV levels independent of traditional cardiovascular risk factors in different populations [11–14]. Therefore, early detection and prevention of arterial stiffness are of great importance.

Previous studies have shown significant associations between BP levels and arterial stiffness. For instance, subjects with a high level of ba-PWV had higher risks of hypertension [15], and subjects with a high BP level were more likely to have increased ba-PWV [16]. However, most studies were cross-sectional. Associations of stage 1 hypertension defined by the 2017 ACC/AHA guidelines with the development of arterial stiffness were rarely reported. Therefore, using data from a well-defined population cohort of community residents in China, we aimed to examine the associations between ACC/AHA stage 1 hypertension and incident arterial stiffness defined by an increased ba-PWV.

Table 2. Risks of developing an increased ba-PWV in association with blood pressure categories in the overall study population and in subgroups of sex, age, and dysglycemia. 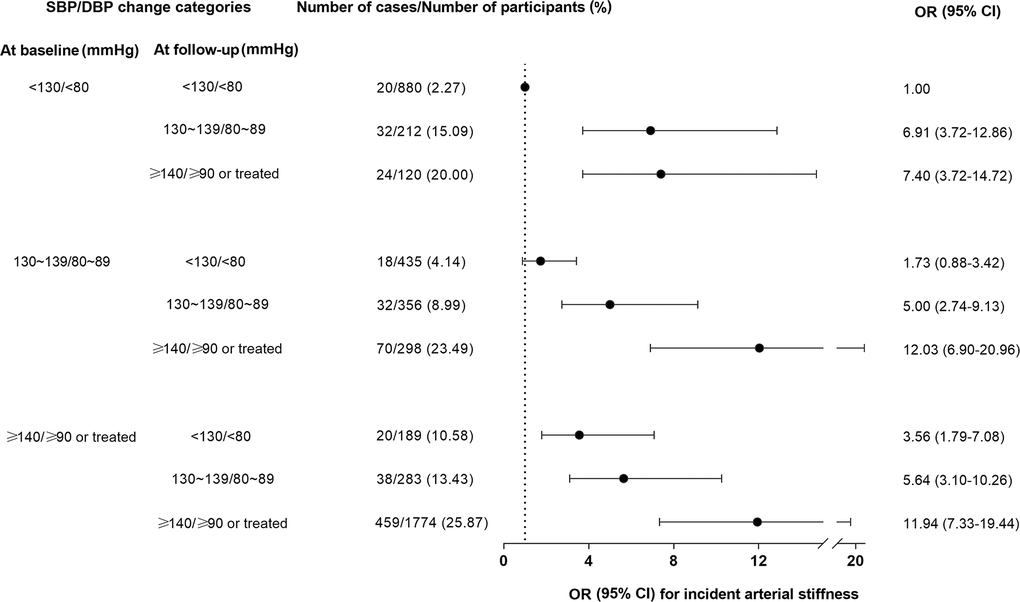 Using data from a well-defined community cohort of Chinese adults aged ≥40 years, we found that stage 1 hypertension defined by the 2017 ACC/AHA guideline was significantly associated with a higher risk of developing arterial stiffness defined by an increased ba-PWV level compared with the normal BP category. The association was more evident in adults aged 40-59 years and was not significant in adults aged ≥60 years. In addition, a systolic BP of 130~139 mmHg might be more closely related with arterial stiffness than a diastolic BP 80~89 mmHg. Furthermore, participants with BP levels 130~139/80~89 mmHg either at baseline or at follow-up had increased risks of arterial stiffness compared with continuously normal BP.

In addition, changes in BP levels over a median of 4.3 years were also important with regard to arterial stiffness, as found in the current study. Increasing BP levels during follow-up were all associated with increasing risks of arterial stiffness when compared with non-hypertensive BP levels maintained at both baseline and follow-up. Stage 1 hypertension, whether already present at baseline or developed during follow-up, was associated with a significantly increased risk of arterial stiffness, indicating the importance of long-term BP management under the levels of 130/80 mmHg in reducing cardiovascular risks.

The current study is among the first to examine prospectively the association between stage 1 hypertension and the development of arterial stiffness. Arterial stiffness was evaluated in a large sample of community residents using ba-PWV at baseline and at follow-up after a median of 4.3 years. BP levels of stage 1 hypertension were examined comprehensively by baseline systolic BP and diastolic BP combined or separated, as well as by changes in BP levels during follow-up. However, there are also limitations. First, BP levels were measured on a single day in the morning of clinic examination, although 3 measurements were obtained for each participant. Measuring BP levels at different times of the day and at different days is important for the diagnosis of hypertension. Second, the follow-up duration was relatively short and only one follow-up visit was conducted. Therefore, changes in BP levels and the development of arterial stiffness in the current study were recorded in parallel. Third, a significant number of participants with missing data on ba-PWV at follow-up were excluded, which has the potential to introduce selection bias. Although general characteristics were largely similar between participants included and those excluded, proportions of men and current smoking were higher and levels of BMI, BP, LDL cholesterol, and total cholesterol were lower in those excluded (Supplementary Table 1). Finally, although a comprehensive cardiometabolic risk profile was adjusted in multivariable models, residual or undetected confounders could not be ruled out. 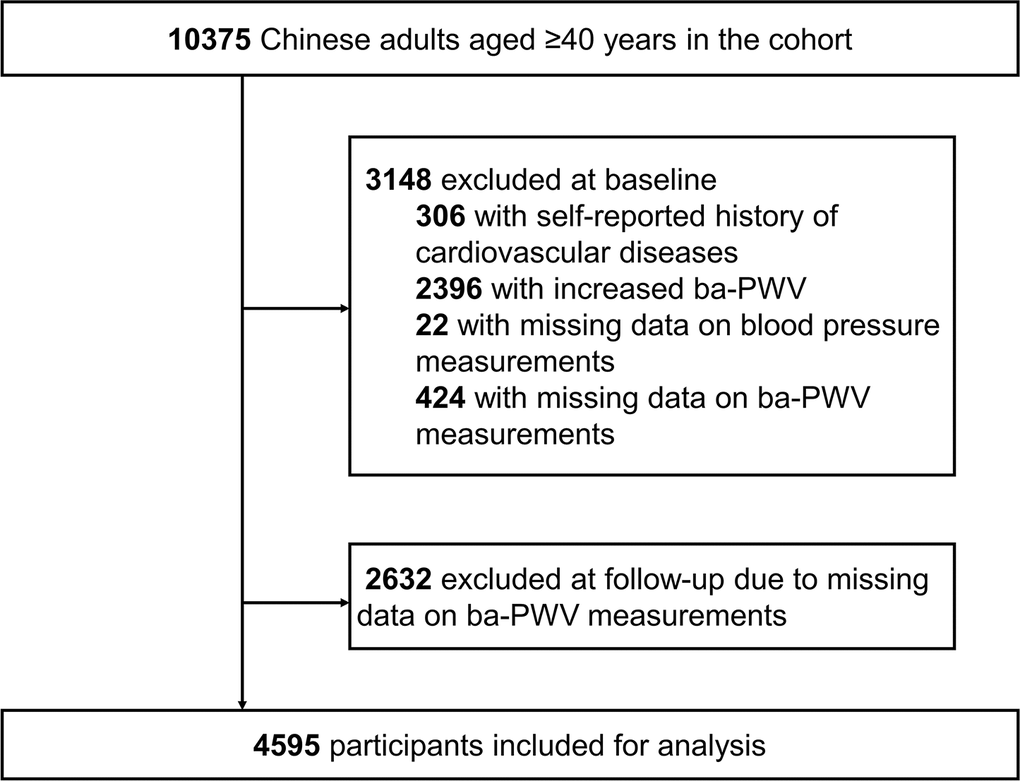 The study protocol was approved by the Institutional Review Board at Ruijin Hospital affiliated to Shanghai Jiaotong University School of Medicine. All participants provided written informed consent.

At the baseline examination, each participant completed a standard questionnaire including sociodemographic characteristics, medical history of chronic diseases, and lifestyle factors, etc. Current smoking or current drinking was defined as smoking or drinking regularly during the past 6 months. Physical activity was recorded using the International Physical Activity Questionnaire (IPAQ) and was dichotomized according to the recommendation of current guidelines [≥600 metabolic equivalent minutes per week (MET-min/week)] [30]. Anthropometric measurements were performed according to a standard protocol. Height and weight were measured with participants wearing light clothes and without shoes. BMI was calculated as weight in kilograms divided by height in meters squared. Three BP measurements were obtained from each participant in a seated position using a calibrated automatic electronic device (OMRON Model HEM-752 FUZZY, Omron Company, Dalian, China) in a separate examination room after at least 5-minute sitting rest. Participants were advised to avoid alcohol, coffee, tea, smoking and exercise at least 30 minutes before BP measurement. The average of three readings was used for analysis.

Fasting venous blood sample was drawn from each participant after at least a 10-hour overnight fast. An oral glucose tolerance test was performed and blood samples were re-taken 2 hours after the glucose load. Plasma glucose, serum lipids and creatinine were measured on an auto-analyser (Modular P800, Modular E170; Roche, Basel, Switzerland). eGFR was calculated using the Chronic Kidney Disease Epidemiology Collaboration (CKD-EPI) equation [31]. A first voided urine sample at early morning was collected from each participant and urinary albumin and creatinine were measured to estimate the urinary ACR in mg/g.

Levels of ba-PWV were measured at the baseline and follow-up visits by a trained physician using Colin VP-1000 (Model BP203RPE II, form PWV/ABI; OMRON Colin Medical Instruments, Tokyo, Japan) [32]. After cuffs were placed on both sides of upper arms and ankles, pulse waves were obtained simultaneously. The time of delay and the distance from right and left upper arms to right and left ankles were used to calculate the right and left ba-PWV. The larger reading of the right and left ba-PWV was used for analysis. Because there is no clinical cutoff point for ba-PWV, we used the upper quartile of ba-PWV levels at baseline to define normal and increased ba-PWV, as described previously [33]. Therefore, the development of an increased arterial stiffness was defined as a normal ba-PWV (≤1793 cm/s) at baseline and an increased ba-PWV (>1793 cm/s) at follow-up.

Characteristics of study participants were described in total and by BP categories. Continuous variables are presented as means ± standard deviations (SDs) or medians (interquartile ranges) for skewed variables. Categorical variables are shown in absolute numbers (percentages). Linear regression analysis for continuous variables and chi-square tests for categorical variables were conducted to assess the significance of trend across BP categories. The skewed variables such as triglycerides and urinary ACR were logarithmically transformed before analysis. The percentages of participants who developed arterial stiffness at follow-up were calculated in each BP categories and were compared with the normal BP group using chi-square tests. The risks of developing arterial stiffness in association with BP categories were examined using logistic regression models with the normal BP group as the reference. The multivariable-adjusted OR (95% CI) were also calculated in subgroups of men or women, age <60 years or ≥60 years, with or without dysglycemia, and interactions were tested by adding a multiplicative term to the model. In addition, associations were examined with systolic BP and diastolic BP categories separately. Logistic regression models included model 1 with adjustment for age and sex, model 2 with further adjustment for education, current smoking, current drinking, physical activity, and BMI, and model 3 with additional adjustment for FPG, triglycerides, LDL cholesterol, HDL cholesterol, eGFR, and urinary ACR. Furthermore, associations between changes in BP levels over a 4.3-year follow-up period and risks of arterial stiffness were also examined, using logistic regression models adjusted for cardiovascular risk factors mentioned above. Participants were stratified by baseline and follow-up BP (<130/<80, 130~139/80~89, and ≥140/≥90 mmHg or treated) and cross-combined into 9 categories. Participants with systolic BP <130 mmHg and diastolic BP <80 mmHg at both baseline and follow-up were used as the reference.

This work was supported by the grants from the National Key R&D Program of China (2017YFC1310700, 2016YFC1305600, 2018YFC1311800), the National Natural Science Foundation of China (81870560, 81700764, 81561128019), National Science and Technology Major Project for “Significant New Drugs Development” (2017ZX09304007), the Shanghai Municipal Government (18411951800), the Shanghai Shenkang Hospital Development Center (SHDC12019101), the Shanghai Jiaotong University School of Medicine (DLY201801), and the Ruijin Hospital (2018CR002). Dr. Y. Xu was supported by the “Outstanding Young Talent Program” from Shanghai Municipal Government. The study sponsor/funder was not involved in the design of the study; the collection, analysis, and interpretation of data; writing the report; and did not impose any restrictions regarding the publication of the report.