Copyright: © 2021 Cha et al. This is an open access article distributed under the terms of the Creative Commons Attribution License (CC BY 3.0), which permits unrestricted use, distribution, and reproduction in any medium, provided the original author and source are credited.

Elderly patients treated with percutaneous coronary intervention (PCI) have a higher risk of both ischemic and bleeding complications than younger patients. However, few studies have reported how genetic information of elderly patients treated with PCI affects clinical outcomes. We investigated the impact of genetic variants on clinical outcomes in elderly patients. Correlations between single-nucleotide polymorphisms (CYP2C19 and P2Y12 receptor gene G52T polymorphism) and clinical outcomes were analyzed in 811 elderly patients (≥75 years of age) from a prospective multicenter registry. The primary endpoint was a composite of myocardial infarction and death. Secondary endpoints were an individual event of death, cardiac death, myocardial infarction, stent thrombosis, target lesion revascularization, stroke, and major bleeding (Bleeding Academic Research Consortium ≥3). Regarding CYP2C19, patients with poor metabolizers had a significantly higher risk for the primary endpoint (hazard ratio [HR] 2.43; 95% confidence interval [95% CI] 1.12–5.24; p=0.024) and secondary endpoints (death and cardiac death). Regarding P2Y12 G52T, the TT group had a significantly higher occurrence of major bleeding than the other groups (HR 3.87; 95% CI 1.41–10.68; p=0.009). In conclusion, poor metabolizers of CYP2C19 and TT groups of P2Y12 G52T may be significant predictors of poor clinical outcomes in elderly patients.

The number of elderly patients treated with percutaneous coronary intervention (PCI) for coronary artery disease is increasing [1, 2]. However, elderly patients who undergo PCI due to complex clinical conditions, such as comorbidities, show poor clinical outcomes [3, 4]. Elderly patients who undergo PCI have a higher risk of ischemic events and bleeding complications than younger patients and—consequently—a higher mortality rate [5]. Numerous general population studies have been conducted on the optimal dual antiplatelet therapy (DAPT) strategy to reduce ischemic and bleeding risk [6]. In addition, a tailored DAPT strategy based on genetic variation has also been proposed [7–9]. However, few studies have addressed tailored DAPT based on genetic variation in elderly patients. This multicenter, prospective, observational study investigated the associations between genetic variants and clinical outcomes in elderly patients after PCI.

Baseline characteristics and prevalence of genetic variants in elderly patients

According to the clinical pharmacogenetics implementation consortium guidelines for the CYP2C19 genotype [10], we classified the normal and intermediate metabolizers into one group and poor metabolizers into a second group. There were no statistically significant between-group differences in baseline characteristics, including the presentation of acute coronary syndrome and PRECISE-DAPT (Predicting Bleeding Complication in Patients Undergoing Stent Implantation and Subsequent Dual Antiplatelet Therapy) score (Table 1). The two groups had no significant differences in lesion characteristics and genetic variations (Supplementary Table 2). The two groups had similar discharge medications, without significant differences in in-hospital events. During the platelet function test, the poor metabolizers had a higher P2Y12 reaction unit (PRU) than the other group (269.9±82.8 vs. 234.0±74.8, respectively; p<0.001). However, no significant between-group differences were observed for DAPT duration (Supplementary Table 3).

Table 1. Baseline characteristics and genetic variation according to CYP2C19 variant in elderly patients. 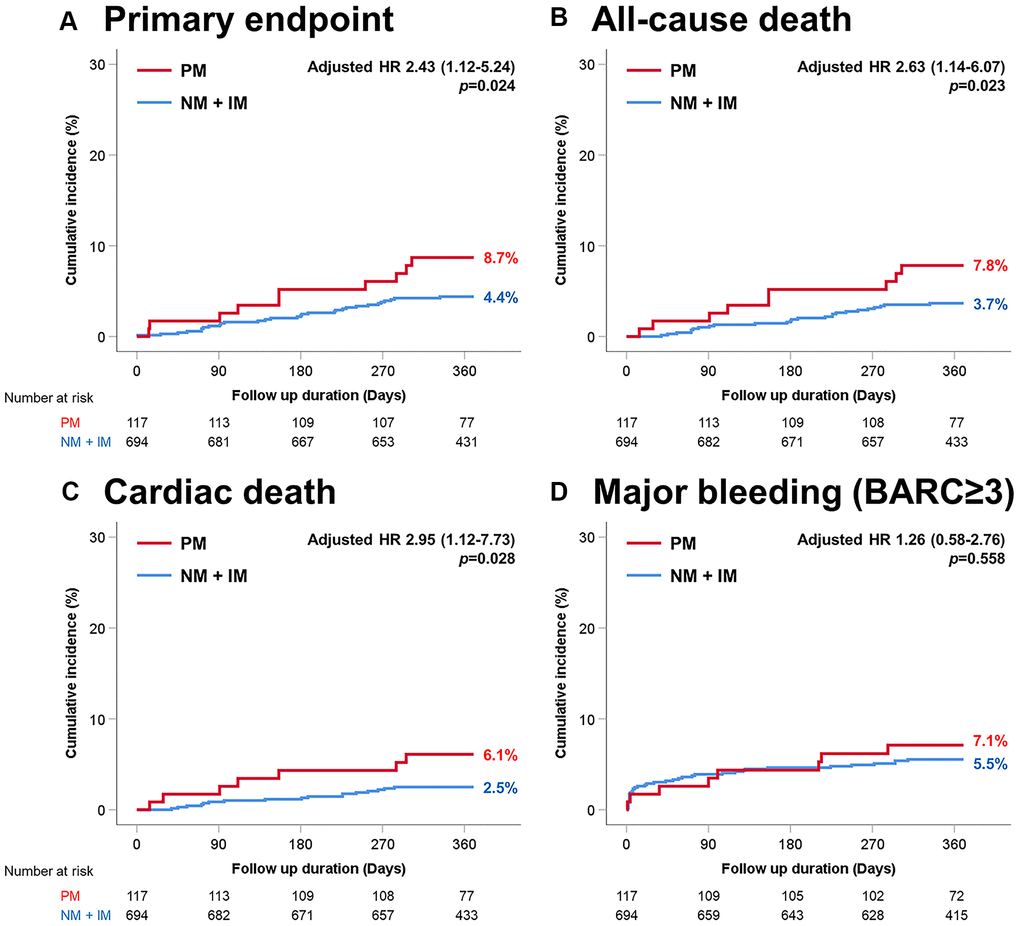 Table 3. Cumulative incidence of clinical outcomes according to CYP2C19 variant in elderly patients.

For the P2Y12 platelet ADP receptor gene G52T polymorphism, there were no significant differences in ischemic events, including primary endpoint between the groups (Table 4). However, the TT group had a significantly higher occurrence rate of major bleeding than the other groups (TT vs. GT vs. GG; 19.2% vs. 4.9% vs. 5.4%; Figure 2). 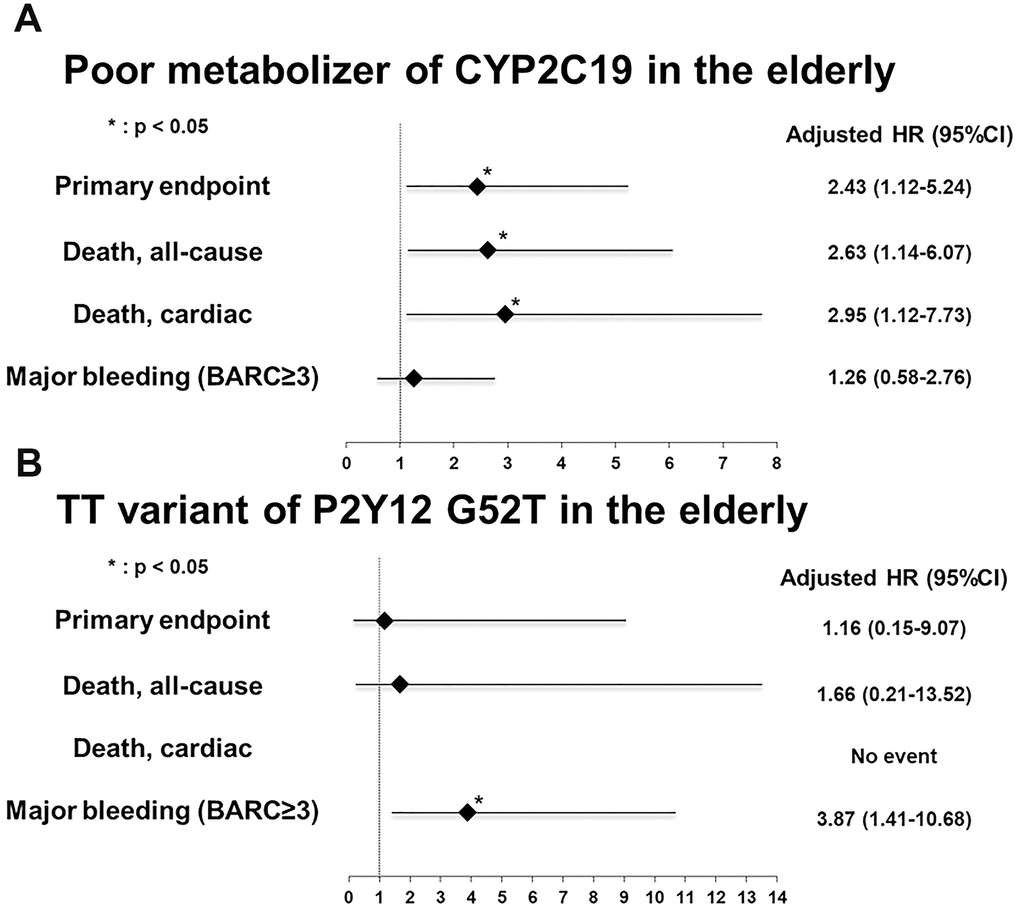 Loss-of-function CYP2C19 alleles decrease the active metabolites of clopidogrel in the blood, thereby reducing the inhibitory effect of clopidogrel on platelet aggregation [13]. Many studies have shown that loss-of-function CYP2C19 alleles are associated with a higher risk of worse clinical outcomes [14–16]. In addition, the U.S. Food and Drug Administration reported a drug safety concern for poor metabolizers of the CYP2C19 variant [17]. However, routine genetic testing in clinical practice is excluded from the current guidelines. The Consortium Guidelines recommend different clopidogrel treatments for patients with loss-of-function CYP2C19 alleles [10]. Briefly, potent P2Y12 inhibitors, such as ticagrelor, are helpful in poor metabolizers. However, in the case of intermediate metabolizers or dose adjustment for clopidogrel, the results are controversial [18]. Moreover, few studies have been conducted on drug adjustment according to genetic variations in the elderly. Thus, we investigated the impact of CYP2C19 variants on clinical outcomes after PCI in elderly patients.

This study showed that elderly patients with poor metabolizers, which require adjusting the antiplatelet therapy, had worse clinical outcomes than the normal and intermediate metabolizer groups when the same DAPT treatment (aspirin and clopidogrel) was applied. However, a longer duration of DAPT was protective against ischemic events in multivariate analysis, and there were no differences in major bleeding between the two groups. Thus, our results suggest that an adjusted dose of potent P2Y12 inhibitor replacement benefits poor metabolizers in elderly patients despite concern for maintaining a long duration of DAPT.

Recent studies, including POPular Genetics and TAILOR-PCI, reported that a genotype-guided oral P2Y12 inhibitor strategy did not significantly reduce ischemic events compared with standard clopidogrel therapy in patients with CYP2C19 loss-of-function [8, 19]. However, the risk of ischemic events in patients with DAPT increases with age [20]. Changes in platelet aggregation, which may contribute to increased ischemic events, increase as patient age increases, that is, a higher rate of ischemic events occurs due to increased platelet aggregability in the elderly [21]. Regarding the relationship between age and genomic variation, Dücker et al. [22] reported that systemic exposure might be increased in elderly patients, even if their old age affects pharmacokinetics and they share the same genetic polymorphism. The authors reported that additional systemic exposure of approximately 1.5-fold occurred by age, even in the same poor metabolizer group, and more clinical events could occur [22]. This might explain why comparisons of clinical outcomes among the poor, normal, and intermediate metabolizers yielded negative results in the general population analysis [8, 23]. Our results revealed that worse clinical outcomes might occur in elderly patients who are poor metabolizers, as the platelet dysfunction caused by biological senescence from old age and the intrinsic risk factors caused by genetic polymorphisms interact with each other. The mechanism by which these interactions operate is not yet known, and further research is required.

P2Y12, which is a G protein-coupled receptor, plays a crucial role in platelet aggregation and is activated by ADP [24, 25]. The P2Y12 receptor is a target of clopidogrel. The P2Y12 platelet ADP receptor gene G52T is one of the polymorphisms in exon 2 of the P2Y12 gene, as reported by Fontana [26]. Despite the low incidence in the TT group and a lack of evidence of the correlation between the TT variant and clinical outcomes, the TT variant was investigated as a potential marker of the P2Y12 gene. Recently, an association between the P2Y12 G52T variant and bleeding events has been reported [27]. Thus, we investigated the impact of P2Y12 G52T in elderly patients. Our results revealed that the risk of major bleeding was higher in the TT group than in the other groups. Patient who received DAPT in the TT group may have a higher probability of hemorrhage. Our results suggest that elderly patients with the TT variant benefit from adjusting the duration of DAPT to prevent major bleeding.

Although evidence-based studies in elderly patients are required, clinical trials in the elderly have not been conducted as often as in younger patients. Even in the current guidelines, the optimal DAPT for elderly patients is unclear because of numerous variables that potentially impact outcomes [11, 12]. A recent study reported changes in ischemia and bleeding in the elderly according to the duration of DAPT [32]. These results suggest that platelet function or genetic tests guided P2Y12 inhibitor adjustment may lead to better clinical outcomes in the elderly. To the best of our knowledge, our study is the first study to show that adjusting the treatment policy according to genetic variation among elderly patients undergoing PCI should be considered for better clinical outcomes. Importantly, our study revealed clinical outcomes after a year of follow-up after PCI. A longer-term investigation may provide insight into the clinical impact of the genotype according to clopidogrel maintenance or discontinuation. Since aspirin and clopidogrel were used as DAPT in this study, the impact on the clinical outcomes of the potent inhibitor ticagrelor is insufficient. Therefore, our results should be interpreted with caution. Finally, we cannot exclude the effects of other drugs, which were not investigated, that affect the metabolism of CYP2C19.

In conclusion, in elderly patients who maintained standard DAPT after PCI, poor metabolizers of CYP2C19 had poor clinical outcomes regarding death and myocardial infarction. The TT group of P2Y12 G52T had a higher risk of major bleeding.

This subanalysis study included 811 elderly patients (≥75 years of age) from a prospective registry (GENIUS study, NCT02707445) (Supplementary Figure 1). The GENIUS study included 5000 patients who underwent PCI for coronary artery disease in 20 tertiary hospitals and investigated the influence of genotyping on coronary artery stenting outcomes between February 2012 and July 2014. The inclusion criteria were as follows: 1) age >20 years and 2) all percutaneous coronary intervention patients within 1 month. Patients who had an allergy to aspirin or clopidogrel, pregnancy, or a life expectancy <1 year were excluded from this registry. Among the 5000 patients, 413 patients were excluded for various reasons, such as inclusion/exclusion criteria violation, follow-up loss, consent withdrawal, missing genotyping results, and missing platelet function test results. In addition, 98 patients with rapid metabolizers (*17) in CYP2C19 were excluded from the analysis because of their confounding effects [33]. Thus, among the 4489 patients, 811 patients aged ≥75 years were defined as elderly patients. DAPT was recommended for a duration of 1 year (3 months) after the index PCI. DAPT included aspirin (100 mg daily) and clopidogrel (75 mg daily). Other P2Y12 inhibitors, such as ticagrelor and prasugrel, and anticoagulants were not prescribed after PCI. The study protocol was approved by the institutional review board of each participating center. Written informed consent was obtained from all patients at enrollment. This study complied with the Declaration of Helsinki and was registered with ClinicalTrials.gov (NCT02707445).

Measured single nucleotide polymorphisms were CYP2C19*2 (rs4244285), CYP2C19*3 (rs4986893), CYP2C19*17 (rs12248560), ABCB1 (rs1045642), PON1 (rs662), and P2Y12 G52T (rs6809699). The genotype of each single nucleotide polymorphism was determined by pyrosequencing using a PSQ 96MA Pyrosequencer (Pyrosequencing AB, Uppsala, Sweden), as previously reported [34]. The results for ABCB1 and PON1 are described in the supplemental materials (Supplementary Figure 2 and Supplementary Tables 6, 7). The VerifyNow P2Y12 assay (Accumetrics, San Diego, CA, USA) was used to measure the inhibitory effect of clopidogrel on platelet reactivity. The results are reported as PRUs. The residual platelet reactivity and genotype results were blinded to the physicians and patients.

This work was supported by Dong-A ST Co., Ltd. All authors declare that the funders had no role in the study design, data collection and analysis, preparation of the manuscript, or decision to publish.