Background and purpose: Rapidly recognizing patients with large-vessel occlusion stroke (LVOS) and transferring them to a center offering recanalization therapy is crucial of maximizing the benefits of early treatment. We therefore aimed to design an easy-to-use recognition instrument for identifying LVOS.

Methods: Prospective data were collected from emergency departments of 12 stroke-center hospitals in China during a 17-month study period. The Stroke Aid for Emergency (SAFE) scale is based on consciousness commands, facial palsy, gaze, and arm motor ability. Receiver operating characteristic analysis was used to obtain the area under the curve for the SAFE scale and previously established scales to predict LVOS.

Results: The SAFE scale could accurately predict LVOS at an accuracy rate comparable to that of the National Institutes of Health Stroke Scale (c-statistics: 0.823 versus 0.831, p = 0.4798). The sensitivity, specificity, positive predictive value, and negative predictive value for the SAFE scale were 0.6875, 0.8577, 0.6937, and 0.8542, respectively, with a cutoff point of 4. The SAFE scale also performed well in a subgroup analysis based on the patients’ ages, occluded vessel locations, and the onset-to-door times.

Conclusions: The SAFE scale can accurately recognize LVOS at a rate comparable to those of other, similar scales.

The combination of systemic thrombolysis and mechanical thrombectomy is highly effective for treating patients with large-vessel occlusion stroke (LVOS) [1, 2]. Because of the time-dependent effects of recanalization therapy, however, it is critical to recognize LVOS patients early and transfer them to the nearest comprehensive stroke center for maximizing early treatment benefits. It has been reported that each minute saved in the onset-to-door framework provides the patient, on average, with an additional 4.2 days of healthy life and increases the opportunity for successful vascular recanalization by 2.5% [3, 4]. The National Institutes of Health Stroke Scale (NIHSS) is originally designed to assess the severity of stroke patients and so used to identify LVOS, but it is complex and time consuming for Emergency Medical Services (EMS) despite good discriminative ability. Currently, some assessment tools simplify the NIHSS items, such as the Rapid Arterial Occlusion Assessment (RACE) Scale [5], Cincinnati Prehospital Stroke Severity Scale (CPSSS) [6], Los Angeles Motor Scale (LAMS) [7], Field Assessment Stroke Triage for Emergency Destination (FAST-ED) scale [8], and Three-Item Stroke Scale (3I-SS) [9], among others, to identify patients with LVOS. Although various scales have been designed, it is not clear which performs best in clinical practice. Thus, there is an urgent need to validate the scales to identify LVOS patients. Considering the limited availability of prehospitalization examinations and the time window effect of recanalization therapy, it is important to accurately identify patients with high likelihood of LVOS in the prehospital setting. Few LVOS predicting scales are built based on Asian populations. In Asian population, the predominant reason for ischemic stroke is intracranial atherosclerosis (ICAS) which is quite different from Caucasian population that have a high rate of extracranial large artery atherosclerosis. In the Chinese population, ICAS is estimated to account for 33% to 50% of acute ischemic stroke [10]. This part of patients may have different functional manifestations when the stroke occurs. A scoring scale suitable for Asian population needs to be designed. We, therefore, designed and validated an easy-to-perform, practical recognition instrument that we called the Stroke Aid for Emergency (SAFE) scale. We then compared it to other existing scales in regard of its ability to detect LVOS.

The data we analyzed came from a national multicenter registry study in China supported by the National Key Research and Development Program to assess key techniques and process improvements in reperfusion therapy for acute ischemic stroke. This project aimed to improve the key endovascular therapy (EVT) technology in stroke centers, standardize the emergency procedures of stroke centers to manage acute LVOS, and improve the standardization of emergency management of stroke in each center. The program was implemented through internet distance education, on-site expert guidance, nationwide teaching, and other methods to standardize the key technologies and management procedures of acute LVOS. Based on the national medical quality control platform, regular quality control was carried out for each central case. During the implementation of the project, each participating center was equipped with the “Stroke First Aid” APP system of emergency treatment process management. The “Stroke First Aid” APP recorded patients' baseline information, imagine approach, treatment approach, stroke onset time, time of image examination, time of puncture, etc., in order to assess the stroke emergency treatment standardization of each participating center. We included ischemic stroke (stroke, transient ischemic attack, or stroke mimics) patients from 12 stroke centers in China between September 2017 and February 2019 in this study. The inclusion criterion was an intracranial vascular examination—magnetic resonance angiography (MRA)/computed tomography angiography (CTA)/digital subtraction angiography—that had been completed within 24 h of stroke onset and before commencement of intravenous thrombolysis or endovascular therapy. The exclusion criteria were (1) age <18 years; (2) incomplete patient baseline data; (3) patient not registered for NIHSS; (4) lack of vascular imaging (CTA) or time-of-flight MRA (TOF-MRA); (5) bilateral anterior circulation infarction or anterior and posterior circulation infarction (Figure 1). 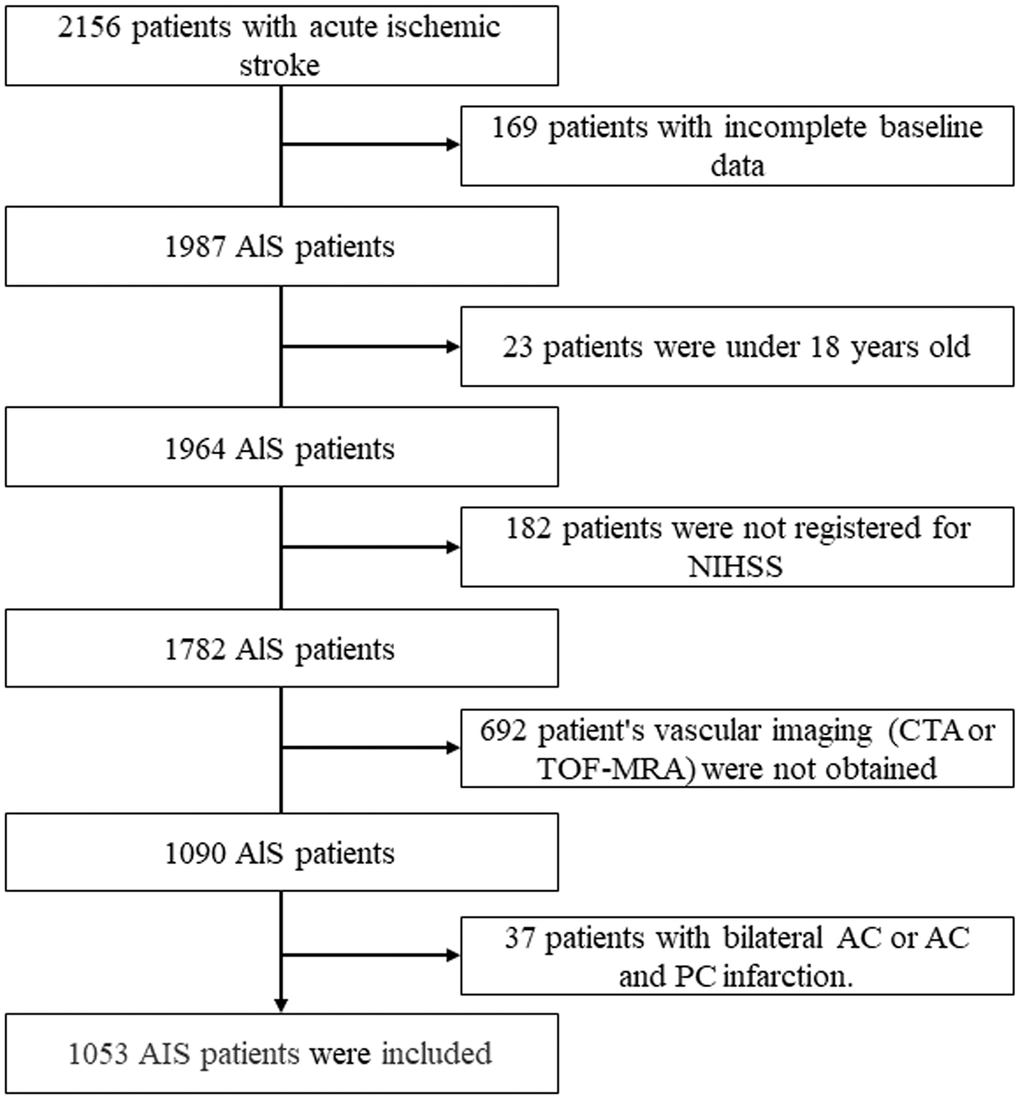 Baseline data included the patient’s age, sex, diabetes mellitus history, hypertension history, blood pressure, blood glucose, heart rate, the occluded vessel, onset-to-door time, NIHSS scale, and treatment strategy. Experienced neurologists conducted neurological examinations and assigned the patients an NIHSS scale at admission. The design of the SAFE scale required, first, analyzing the items of the NIHSS to identify those predicted to have LVOS. We used logistic regression analyses and clinical judgment to select significant items that had the highest discriminatory values in the LVOS and non-LVOS groups in the derivation data set of patients suspected to have LVOS. The items that were discriminatory for LVOS and that were easy to assess for clinical symptoms were preferred. Arm motor ability was assessed for both arms, with the score of the more severely affected side accepted as the final assessment score. Finally, the scale consisted of four items, including consciousness questions, facial palsy, gaze, and arm motor ability. In accordance with the severity of the symptoms, each item was divided into three levels: not severe (0 points), moderately severe (1 point), and seriously severe (2 points). The SAFE scale is shown in Table 1.

Table 1. The SAFE scale and its correspondence to the NIHSS.

LVOS was defined as total occlusion when it involved the intracranial internal carotid artery, M1 and M2 segments of the middle cerebral artery, and the basilar artery on baseline CTA or TOF-MRA [11]. Neurologists and radiologists with certified vascular and radiological experience assessed the occlusion via CTA or TOF-MRA, respectively, until agreement was reached. The institutional review boards at all participating institutions approved this study. The study conformed with the tenets of the Declaration of Helsinki.

The entire data set was randomly divided into two subsets: a derivation data set (702 patients, 66.6%) and a verification data set (351 patients, 33.3%). For continuous variables, the differences between the groups were tested using Student’s t test or the Mann–Whitney U test. For categorical variables, a χ2 test was used to evaluate the differences between groups. Logistic regression analyses were performed on the NIHSS items to identify those that were significantly different between LVOS and non-LVOS in the derivation data set. The optimal cutoff of the SAFE scale was determined at the maximum Youden Index [12]. Sensitivity, specificity, positive predictive value, negative predictive value, Youden index, and overall accuracy were calculated regarding the ability to predict LVOS. Areas under the receiver operating characteristic curves (c-statistics) were compared to evaluate the predictive ability of each scale using the DeLong method [13]. All p values were based on two-sided tests, and p<0.05 was considered to indicate significance. All statistical analyses were carried out using R software (version 3.5.2; R Foundation for Statistical Computing, Vienna, Austria) and MedCalc Statistical Software version 19.0.7 (MedCalc Software Bvba, Ostend, Belgium; https://www.medcalc.org; 2019).

Altogether, 2156 patients with ischemic stroke were prospectively enrolled, and 1103 patients were excluded in accordance with the exclusion criteria, leaving 1053 eligible patients, 364 (34.6%) of whom were women (Figure 1). Their median age was 65 years [interquartile range (IQR) 56–74 years]. The median score for the NIHSS was 6 (IQR 3–12), whereas the SAFE scale had a median score of 2 (IQR 0–4). The median onset-to-door time was 180 min (IQR 100–330 min). In all, 80.3% had an anterior circulation infarction, and 32.4% were diagnosed with LVOS. Among the patients, 69.1% underwent intravenous thrombolysis (IVT), and 30.9% underwent EVT. The baseline variables between LVOS and non-LVOS are shown in Table 2.

Table 2. Baseline variables between LVOS and non-LVOS patients in this study.

Supplementary Table 1 shows the baseline variables for LVOS and non-LVOS in the derivation data set. The median age was 65 years (IQR 55–74 years), and 243 (34.6%) were women. The median onset-to-door time was 180 min (IQR 100–340 min). The patients with LVOS had higher NIHSS than the non-LVOS patients, had more anterior circulation infarctions, and a higher proportion underwent EVT. Data distributions for the verification data set are shown in Supplementary Table 2. NIHSS items and its odds ratios regarding LVOS are shown in Supplementary Table 3. Consciousness questions, best gaze, facial palsy, and left and right arm weakness were independently associated with LVOS. Table 3 shows the cutoff values for the SAFE scale for detecting LVOS in the derivation data set patients. The SAFE scale was calculated on the basis of the NIHSS and showed a predictive value similar to that of the NIHSS for detecting LVOS (c-statistics: 0.845 versus 0.850, p = 0.5212). A SAFE scale of ≥4 had a sensitivity of 0.8647, specificity of 0.6987, positive predictive value of 0.7143, negative predictive value of 0.8556, and accuracy of 0.8105 for detecting LVOS.

Table 4. Thresholds of each scale for detecting LVOS according to sensitivity, specificity, PPV and NPV, and accuracy in verification data set.

Table 5. Areas under ROC of scales for validation and subgroup analysis in verification data set.

The receiver operating characteristics curve is compared with the NIHSS and other scales in Figure 2. The SAFE scale showed a predictive value similar to that of the NIHSS for detecting LVOS (c-statistics: 0.823 versus 0.831, p = 0.4798).

The SAFE scale can recognize LVOS at a level of accuracy that is similar to those of other scales.

This corresponding author has a verified history of publications using the personal email address for correspondence.