Copyright: © 2021 Hou et al. This is an open access article distributed under the terms of the Creative Commons Attribution License (CC BY 3.0), which permits unrestricted use, distribution, and reproduction in any medium, provided the original author and source are credited.

Proteome integrity is crucial for healthy cellular homeostasis. Autophagy is a ubiquitous self-degradation process that involves degradation of misfolded proteins or damaged organelles through the lysosomal pathway. This process includes formation of autophagosomes and their fusion with lysosomes, where the content is degraded by lysosomal proteases [1–3]. Low levels of autophagic activity are commonly observed under physiological conditions; the degradation and recycling of cellular cytoplasmic constituents prevent the accumulation of damaged or toxic components and maintain a normal cellular homeostasis [4, 5]. Defects in autophagy reportedly contribute to several diseases, including cancer [6–8]. In cancer, autophagy is a double-edged sword. In early stages of carcinogenesis, autophagy removes the intracellular damaged organelles that promote tumor growth, thus acting as a tumor suppressor [9]. However, during cancer progression, autophagy confers the ability of tumor cells to respond to cellular stress [10], and promotes chemoresistance of established tumors [11].

Genomic stability and integrity are important for maintaining healthy cellular homeostasis to prevent human disease. Upon DNA damage, DNA repair is activated to maintain normal cellular functions [12]. Although autophagy is a cytoplasmic process, in its absence DNA damage is increased [13, 14]; however, the underlying mechanisms are unclear. One possible mechanism is that autophagy-deficient cells accumulate damaged and abnormal proteins, resulting in the accumulation of reactive oxygen species and an increased incidence of genetic lesions [15]. In addition, autophagy-deficient cells may have a defect in DNA repair, since autophagy loss impairs the homologous recombination (HR) DNA repair by enhancing degradation of the checkpoint kinase 1 (Chk1) [13]. Moreover, autophagy is involved in HR-direct DNA double-strand break repair [16]. Cells likely employ different mechanisms to repair DNA damage, including base excision repair (BER), nucleotide excision repair (NER), homologous recombination (HR), and non-homologous end joining (NHEJ) [17]. 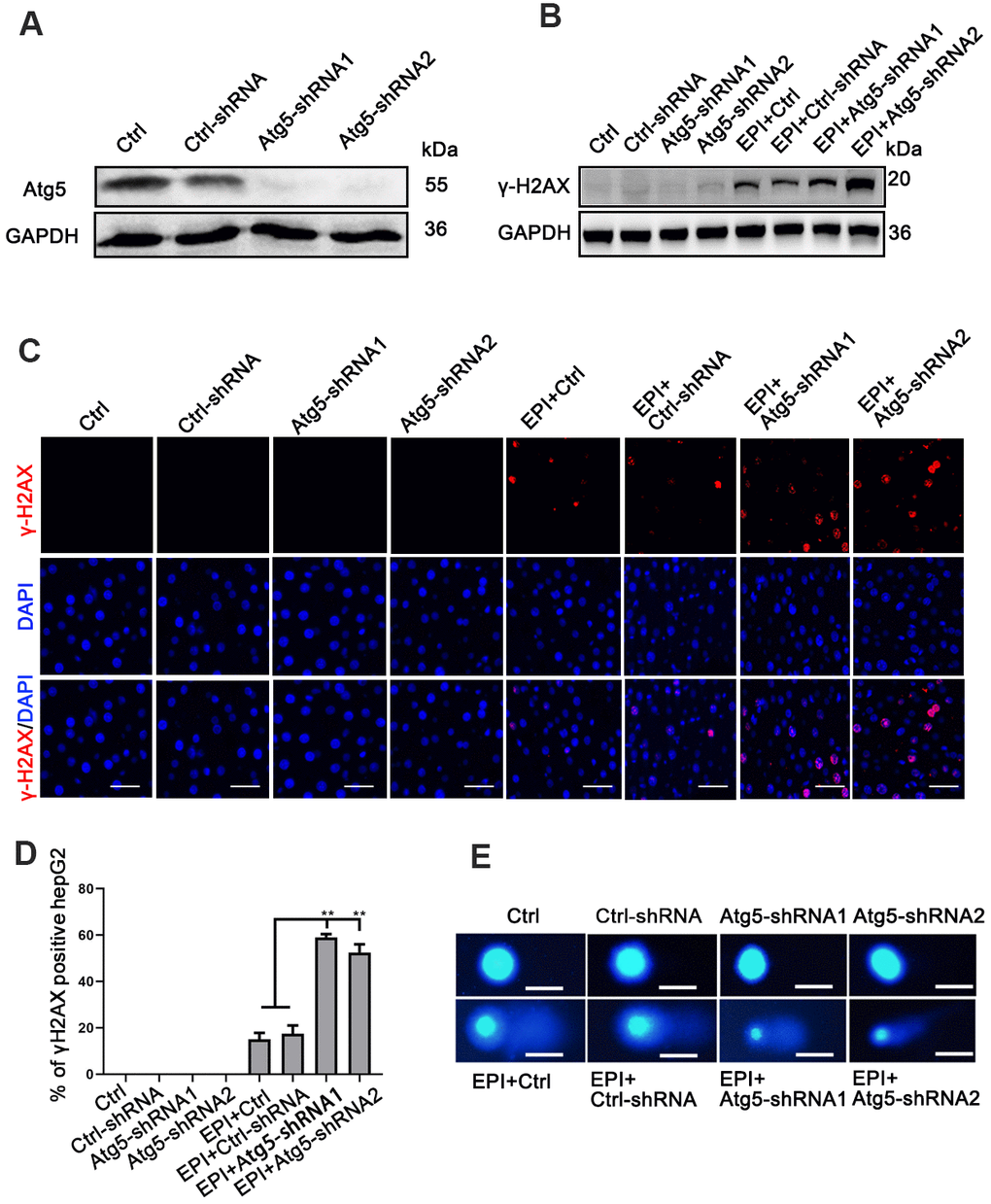 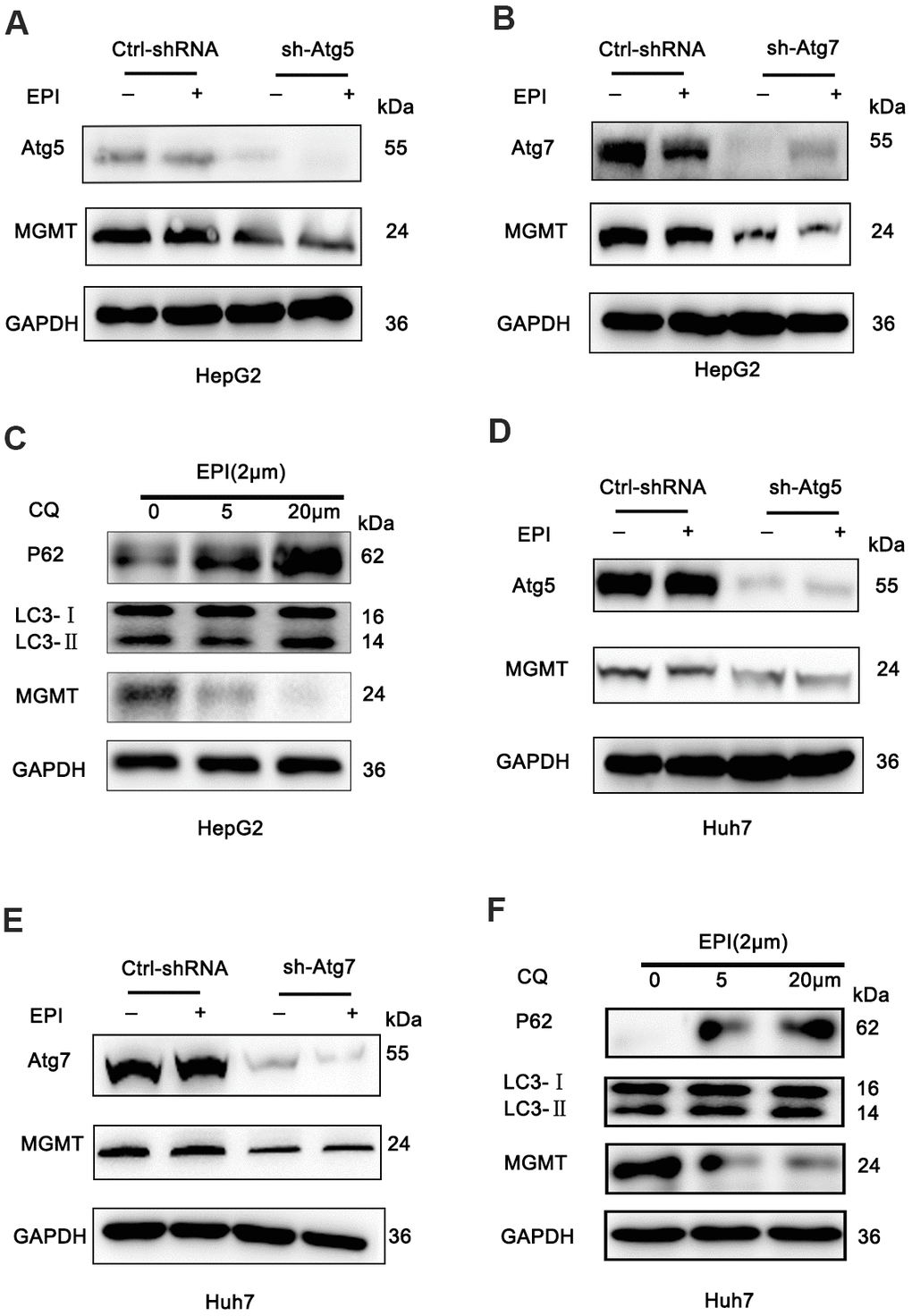 Induction of autophagy has no impact on MGMT expression

Next, we asked whether autophagy induction could enhance the MGMT expression. Studies have indicated that chemotherapy can induce autophagy [18, 19]. LC3 is an important autophagy marker. LC3-phosphatidylethanolamine conjugate (LC3-II, also called the conjugated LC3) is targeted to autophagosomal membrane, and its accumulation is an indicator of autophagy induction [20]. Thus, to measure autophagy, we treated both HepG2 and Huh7 cells with plasmid expressing GFP-LC3 or a control vector. Under normal conditions, the green fluorescent GFP-LC3 fusion protein is distributed in the cytoplasm. When autophagy is induced, LC3 is converted to LC3-II that binds to cell lipid membrane, thus forming LC3-II puncta. Fluorescence microscopy quantitative analysis revealed a pronounced increase in LC3-II puncta in epirubicin-treated cells transfected 48 h with GFP-LC3; after 6 h, 4 μM epirubicin induced a 4-fold increase in HepG2 cells, and a 6-fold increase in Huh7 cells (Figure 3A, 3B). Western blot analysis also confirmed these findings; epirubicin treatment (24 h) dose-dependently increased the LC3-II levels (Figure 3C, 3D, 3H, 3J). In addition to LC3-II, low doses of epirubicin increased the protein levels of p62, an autophagy receptor that recognizes aggregated proteins and promotes their degradation by autophagy. However, both LC3-II and p62 protein levels were gradually reduced at higher epirubicin concentrations, indicating their degradation during advanced stages of autophagy (Figure 3C, 3D, 3G, 3I). 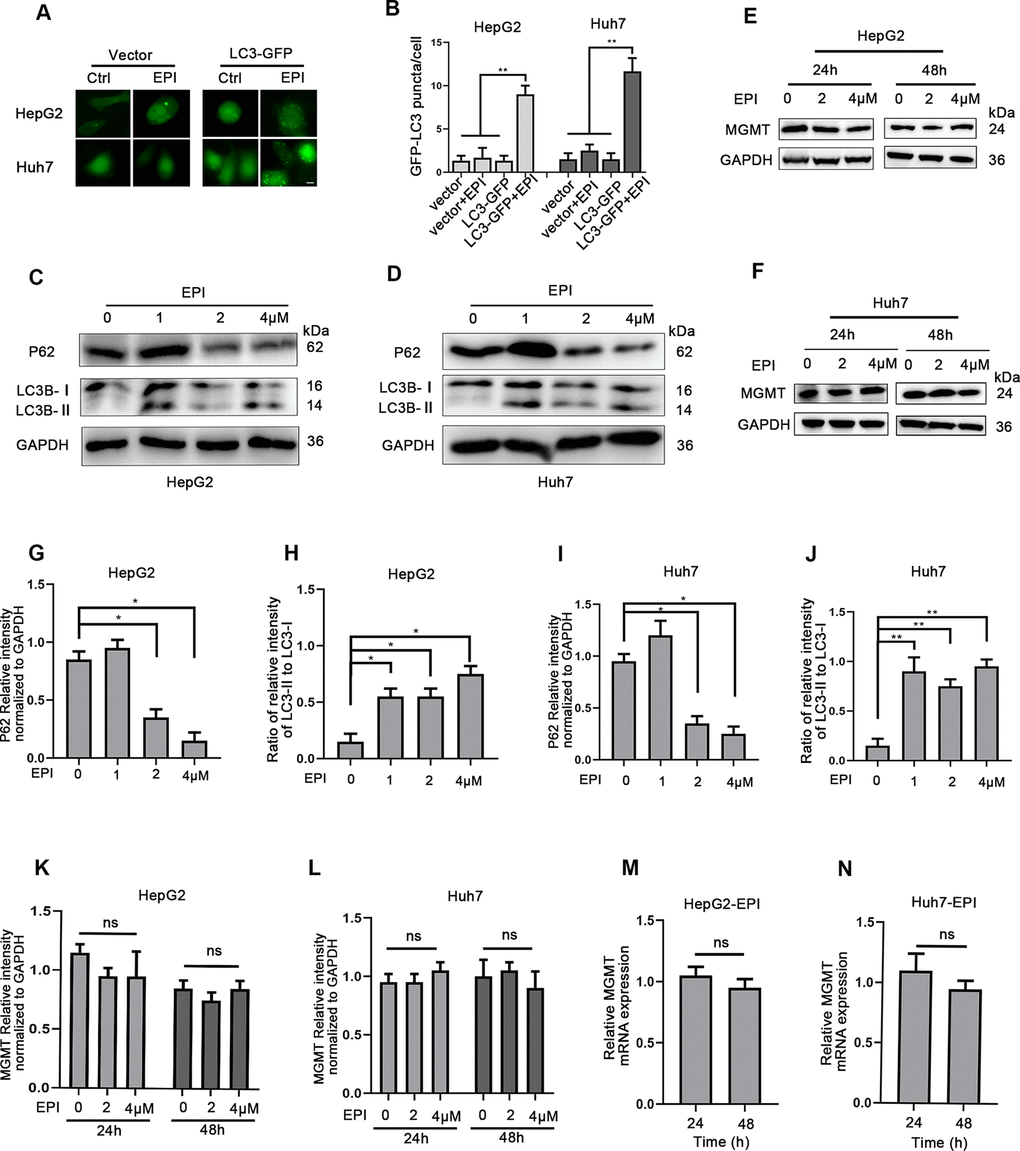 We next investigated whether the autophagy deficiency-mediated downregulation of MGMT might affect the cellular responses to chemotherapy. When autophagy-deficient sh-Atg5 cells were treated with epirubicin, a significant synergistic death was observed; however, this cell death was reversed by MGMT overexpression (Figure 4A and Supplementary Figure 4A–4C). In contrast, in control cells, MGMT overexpression had no impact on the epirubicin-induced cell death (Figure 4A and Supplementary Figure 4A–4C). MGMT removes O6-methylguanine (O6MeG) induced by alkylating agents, such as temozolomide (TMZ). In control cells, MGMT rescued cell death induced by TMZ. However, autophagy-deficient cells were more sensitive to TMZ than control cells. In addition, a similar effect was observed in epirubicin-treated cells, where MGMT overexpression inhibited the synergistic killing due to the combination of autophagy deficiency and TMZ (Figure 4B). 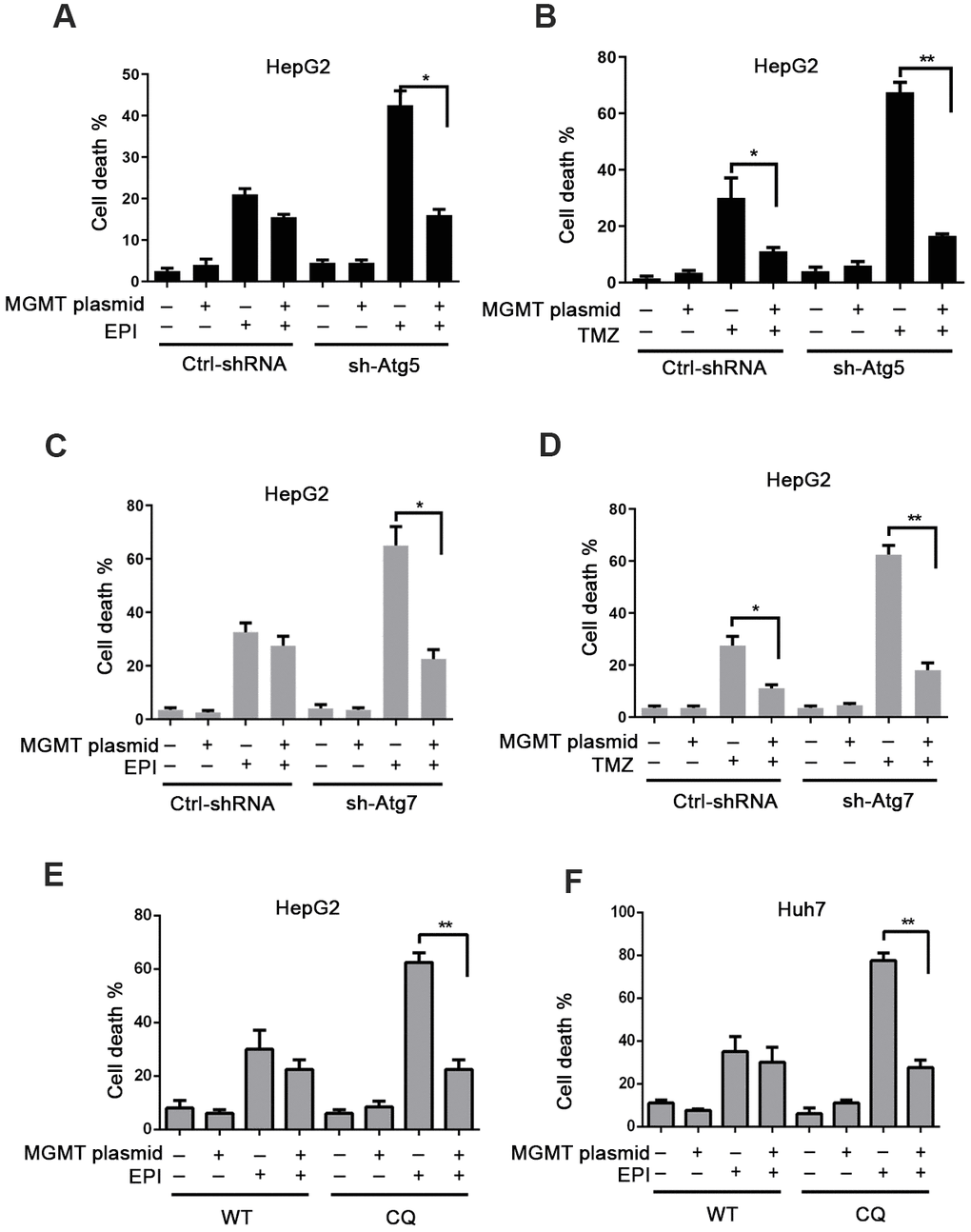 To determine whether this effect was related just to Atg5, we also used sh-Atg7 cells. As in sh-Atg5 cells, sh-Atg7 cells were more sensitive to epirubicin and TMZ compared to control cells. When MGMT was overexpressed (Supplementary Figure 4D–4F), the synergistic cell death was absent in sh-Atg7 cells treated with epirubicin and TMZ (Figure 4C, 4D). In addition, we analyzed whether this effect occurred in HepG2 and Huh7 cells overexpressing MGMT in the presence of the chemical inhibitor of autophagy, QC. Similarly to what we already observed, CQ promoted the cell death induced by epirubicin, but when cells were treated with epirubicin in the presence of MGMT, autophagy inhibition had no impact on the epirubicin-induced cell death (Figure 4E, 4F).

MGMT repairs methylated nucleobases in DNA by transferring methyl groups from O6-MG of DNA to cysteine residues in the active site of MGMT, resulting in MGMT inactivation and degradation [21]. Previous studies reported that MGMT was involved in DNA damage caused by the classical alkylating agent temozolomide (TMZ), as TMZ promotes formation of O6-methylguanine (O6MeG) and breakage of DNA strands [22]. However, our data showed that the MGMT expression was downregulated in autophagy-deficient liver cancer cells regardless of epirubicin, a non- alkylating agent, suggesting that the MGMT loss was not due to inactivation and degradation caused by repairing the DNA alkyl groups. Autophagy usually degrades misfolded proteins or damaged organelles through the lysosomal pathway to maintain cellular homeostasis. However, our results showed that autophagy inhibition in liver cancer cells reduced both mRNA and protein levels of MGMT, indicating that autophagy inhibition suppresses MGMT gene expression in these cells.

Interestingly, our data showed that autophagy induction did not affect the MGMT levels in liver cancer cells. According to the Protein Information Resource (PIR; https://proteininformationresource.org/), MGMT is expressed in 207 tissues, but its highest expression is in the liver. Thus, it is possible that the high MGMT expression in liver cells hindered its further upregulation by autophagy induction. Our data also showed that epirubicin did not induce the MGMT loss; since epirubicin does not promote DNA alkylation, MGMT is likely not involved in DNA repair under these conditions. However, in the absence of autophagy, the chemosensitivity of liver cancer cells was increased, but this could be reversed by MGMT overexpression. These findings suggest that autophagy mediates chemotherapy resistance via MGMT in liver cancer cells.

In summary, our study demonstrates that autophagy deficiency downregulates expression of the DNA damage repair enzyme, MGMT in liver cancer cells, and that MGMT expression enhances chemoresistance of autophagy-deficient cells. These findings reveal a new mechanism of autophagy involvement in chemoresistance of liver cancer cells. In addition, our data demonstrate that MGMT deficiency not only enhances chemosensitivity to alkylating agents, but also promotes chemosensitivity to other therapeutic agents in autophagy-deficient liver cancer cells.

Suppression of Atg5 and Atg7 by lentivirus-delivered shRNA

HepG2 and Huh7 cells were transfected with lentivirus expressing Atg5/Atg7 shRNA and ctrl-shRNA in a fresh DMEM medium containing 5 μg/ml polybrene. After 72 h, the medium was changed to fresh DMEM containing 3μg/ml puromycin for stable expression of the shRNA. After successful transfection, the efficiency of Atg5/Atg7 suppression was tested by qRT-PCR.

Cells were collected and mRNA was extracted by using TRIzol (Invitrogen, Carlsbad, CA, USA). Total cDNA was then reversely transcribed from 1 μg of RNA. Expression of mRNA was determined by real-time RT-PCR using SYBR Green Master Mix (Applied Biosystems, Foster City, CA, USA). Endogenous GAPDH mRNA was used to normalize the sample RNA. The primer sequences used in qPCR were as follow: MGMT: 5′-ACCGTTTGCGACTTGGTACTT-3′(forward), 5′-GGAGCTTTATTTCGTGCAGACC-3′(reverse);GAPDH:5′-TGTGGGCATCAATGGATTTGG-3′(forward),5′-ACACCATGTATTCCGGGTCAAT-3′(reverse);Atg5:5′-AAAGATGTGCTTCGAGATGTGT-3′(forward);5′-CACTTTGTCAGTTACCAACGTCA-3′(reverse);Atg7:5′-CAGTTTGCCCCTTTTAGTAGTGC-3′(forward);5′-CCAGCCGATACTCGTTCAGC-3′(reverse). The reaction conditions were: an initial hold at 50° C for 4 min and then 95° C for 10 min; followed by a two-step PCR program of 95° C for 15 s and 60° C for 45 s, repeated for 40 cycles using Mx4000 system (Stratagene, La Jolla, CA, USA).

HepG2 and Huh7 cells were transfected with GFP-LC3 expressing plasmid by using Fugene HD transfection reagent (Roche, Cat.06366236001) according to the manufacturer’s instructions. In brief, cells were seeded (1×104 cells/well) in 48-well plates overnight and transiently transfected with GFP-LC3 plasmid. After the expression of GFP-LC3 was verified by fluorescence microscope (Olympus IX71), the cells were treated with epirubicin (Shanghai Eastern Hepatobiliary Surgery Hospital), and autophagy was analyzed by observing cells with GFP-LC3-positive dots under fluorescence microscope.

Alkaline comet assay, used to evaluate DNA strand breaks, was carried out according to manufacturer’s instructions (Trevigen, Gaithersburg, MD, USA). Briefly, tumor cells were incubated with epirubicin for 12 h, and then embedded in molten LMAgarose (at 37° C; 5×102 cells) and spread evenly onto CometSlideTM. Cells were then lysed (4° C for 30 min) and immersed in fresh Alkaline Unwinding Solution (pH>13) for 20 min at room temperature in the dark. This step was followed by electrophoresis conducted for 30 min at 21 V. After electrophoresis, slides were washed in d H2O (5 min) and in 70% ethanol (5 min), dried, and stained with DAPI. Pictures were taken by a fluorescent microscope, and the acquired images were analyzed by CASP software.

Cells were seeded on a 24-well dish with fresh medium, and incubated in a humidified incubator under 5% CO2 at 37° C. After 24 h, cells were washed with PBS, and then fixed with 4% paraformaldehyde and 0.1% Triton in PBS buffer at 4° C for 30 minutes. After blocking with 1% bovine serum albumin (BSA), cells were incubated with primary antibody (γ-H2AX) overnight, followed by secondary antibody (37° C for 2 h). Cells were then washed with TBS, stained with DAPI and observed by a fluorescence microscope.

Cell Counting Kit-8 (CCK-8, Bioworld) was used to evaluate cell proliferation. Cells were seeded at 5.0 ×103 cells (100 μl culture medium per well) into 96-well plates. After 24 h, the cells were treated with epirubicin, and 10 μl of CCK8 solution in 100 μl of FBS-free culture medium were added to each well. Cells were incubated at 37° C in 5% humidified CO2 atmosphere for 1h, and absorbance at 450 nm was detected by using a microplate reader (BioTek, Synergy HT, Winooski, VT, USA). Each experiment was performed three times; the results were presented as the means ± SD.

For cell apoptosis analysis, approximately 6×105 cells were seeded in 6-well plates. Annexin V-fluorescein isothiocyanate (FITC) assay was used to measure apoptosis by flow cytometry according to the manufacturer’s instructions (Nanjing Keygen Biotech, China). Briefly, cells were collected by trypsinization, washed with ice-cold PBS, resuspended in 300 μl of PBS containing 30 μl of 10×binding buffer, 5 μl Annexin V and 5 μl PI, and then incubated for 5 min at room temperature in dark. After incubation, at least 10,000 cells were measured on a BD FACSAria flow cytometer (BD Bioscience, San Jose, CA, USA). Results were expressed as the percentage of apoptotic cells at early and late stages (PI positive and Annexin V positive).

Statistical analysis was done by using GraphPad Prism 5. Student’s t-test was used to compare the mean values between two groups. The data are expressed as mean ±SD. A difference of at least P<0.05 was considered statistically significant.