Objective: To study the effect of Yu Linzhu on ovarian function and mitochondria in natural aging mice.

Methods: Female BALB/c mice were selected as normal group at 7–8 weeks and natural aging group at 9 months. The natural aging group was divided into Yu Linzhu intervention group and non-intervention group by intragastric administration once a day for 6 weeks. The morphology and blood flow of ovary were observed by ultrasound. Ovarian morphology and follicle were observed by HE staining. Hormone levels were analyzed by ELISA. Serum oxidative stress were detected by radioimmunoassay. The distribution of mitochondria in oocytes was observed by fluorescence staining. The ultrastructure of oocytes and the morphology of mitochondria were observed under electron microscope. The mitochondrial membrane potential was detected by JC-1.

Conclusion: Yu Linzhu can improve the ovarian function of natural aging mice by improving the mitochondrial function of oocytes.

Ovarian senescence is a biological process affected by many factors, gradually accumulating and continuously complicated, accompanied by the decrease of mitochondrial number, structural change and productivity of oocytes associated with the decrease of oxidative phosphorylation function. As the most important organelle in the cytoplasm, mitochondria helps oocyte maturation and embryonic development. Mitochondrial dysfunction and mitochondrial DNA mutation inhibit the normal development of oocytes. Mitochondria are the determinants of ovarian senescence [1, 2]. Changes in mitochondrial physiology and metabolism leading to excessive accumulation of reactive oxygen species are considered to be markers of aging [3]. Current studies have shown that age-related changes in mitochondria have a potential impact on oocyte quality in the study of age-related changes in the entire ovarian microenvironment [4].

Yu Linzhu is an ancient traditional Chinese medicine prescription that can treat infertility. It can warm spleen and kidney. In the formula, Four Gentlemen Decoction invigorate spleen and invigorate qi. Decoction of Four Ingredients nourish blood to fill essence. Semen Cuscute, Cortex Eucommiae and Cornu Cervi Dege Latinatum can warm and reinforce kidney yang. Pericardium Zanthoxyli can warm the body to promote follicle development and ovulation. The whole prescription promotes ovulation and ultimately improves ovarian function. Previous studies have found that Yu Linzhu can improve the serum hormone levels in POI patients [5]. Basic studies have further confirmed that it downregulates BAX/Bcl-2 inhibits the ovarian granulosa cell apoptosis [6]. Further studies have found that Yu Linzhu activates the mTOR pathway and promotes follicular development, which can improve ovarian dysfunction [7]. We speculate that it can improve ovarian senescence, so this experiment is to observe the effect of Yu Linzhu on ovarian function of natural aging mice, and to observe the effect of traditional Chinese medicine on ovarian function and oocyte mitochondria. Yu Linzhu can improve ovarian function by improving mitochondria.

A total of 10 seven-to-eight-week-old SPF BABL/c female mice and 20 nine-month-old female mice were purchased from Beijing Vitonglida Experimental Animal Center (Animal Certificate No. SCXK2012-0001, Beijing, China). All mice were maintained at a constant temperature (20°C–22°C) and humidity (30%–70%) in a 12/12-hour light/dark cycle and had unrestricted access to water. All animal experiments were approved by the Ethics Committee of Animal Experiment, Capital Medical University, in accordance with the guidelines of the National Research for the Care and Use of laboratory animals.

Small cotton swabs were soaked in saline, inserted into the vagina of mice approximately 5 mm, rotated clockwise 6 times, then rolled and smeared on a clean slide. The slide was naturally air-dried. The smears of vaginal secretions were collected for one week, stained with Swiss Giemsa staining solution for approximately 5 min, rinsed with water and observed under an ordinary optical microscope.

The back fur of mice was removed with depilation ointment (Wei Ting), the mice were anesthetized by ultrasonic special table, and isoflurane (2.5%) was inhaled. A probe was placed 2–3 mm above the outer surface of the back of the mouse to see the appearance and disappearance of one side of the ovary as the moving area of the probe, and the other side of the ovary imaging was obtained by the same method. The color sampling frame was placed on the ovarian area corresponding to the back surface of the mouse to observe the arterial blood flow.

The mice were anaesthetized by intraperitoneal injection of 4% chloral hydrate 0.1 ml/10 g. Take 10 ml 10% chloral hydrate plus 15 ml double-steamed water, mix evenly dilute to 4% chloral hydrate. After 5 minutes, the mice were anesthetized, then the blood was collected from heart. Then the animals were sacrificed by CO2 asphyxiation, the ovary and uterus were taken by routine aseptic method. One side of the ovary of three mice were fixed in precooled glutaraldehyde solution (2.5%), the other side of the ovary was fixed in formaldehyde. The formaldehyde-fixed ovarian tissue was dehydrated by gradient ethanol, paraffin-embedded, sliced, dewaxed, stained with conventional HE, and observed under a light microscope. The blood samples of the mice were allowed to stand and centrifuged, and ELISA were used to detect the contents of serum hormone and oxidative stress indexes in strict accordance with the kit instructions.

After 10/IU PMSG intraperitoneal injection of mice, they were killed by CO2 asphyxiation 48 hours later. Ovaries were cut off and placed in preheated HEPES, 5 for fluorescence and 5 for JC-1 (Figure 1). Under a microscope, the ovaries were released out of the ovaries with injection needle No. 5 and tweezers and punctured the follicles, and the oocytes were released from them. COC (Cumulus-Oocyte Complex) collected by oral straw was transferred to MEM medium containing 10% FBS and cultured in a 37°C gas incubator (5% CO2, 5% O2, 90% N2) for 17 hours to the MII stage. We did not choose HCG (human chorionic gonadotrophin) because it does not work, no follicles fall into the fallopian tube. To avoid mistakes, we chose to incubate directly. The oocytes that took off the granulosa cells were transferred to a 400 nmol/L Mito Tracker Green FM four-well dish preheated at 37°C and stained in a 37°C incubator for 30 minutes and washed with PBS 3 times for 5 minutes each time. After the above staining, the oocytes were added to 10 μg/ml Hoechst 33342, stained with nucleus for 10 minutes, and washed three times with PBS. The stained oocytes were transferred onto a slide for observation and analysis by laser confocal microscopy.

The ovaries in Gluta fixation solution were cut into 1 × 1 × 1 mm3 sized tissue blocks, fixed in 4°C refrigerator for 4 hours, washed 3 times with 1XPB for 10 minutes each time, fixed with 1% osmotic acid for 1 h, washed 3 times for 10 minutes each time, and incubated with 2% U3HAC stain for 30 minutes. Then, the samples dehydrated in gradient alcohol (50%, 70%, 90%) for 10 minutes, 100% alcohol for 15 minutes, and 100% acetone for 15 minutes. Next, ultrathin slices with a thickness of 120 nm were prepared. The slices were stained with 4% UAC for 20 minutes and lead citrate for 5 minutes and observed with electron microscopy.

GraphPad Prism 8.0 software was used for analysis. The experimental data are represented by , and the data were first tested for normal distribution. If the data were normally distributed, the differences between the two groups were compared by variance analysis, the variance was analyzed by the LSD method, and the variance was uneven by the Tamhane’s T2 method. If the data were not normally distributed, Kruskal-Wallis H test of multiple independent samples in nonparametric statistics was used. P < 0.05 indicated that the difference was statistically significant.

Effect of Yu Linzhu on estrus cycle in mice

Effect of Yu Linzhu on blood flow of mice

Effect of Yu Linzhu on the morphology of mouse ovary

Our naked eye observed that compared with the normal group, the ovarian volume of the mice in the aging non-intervention group was smaller than that in the normal group, and some ovarian tissues were adhered to the surrounding tissues, and the ovarian volume of the mice in the aging intervention group increased and the degree of adhesion was reduced. Under optical microscope, it was found that the ovarian interstitial lymphocytes infiltrated, some pellucida decreased, granulosa cells were arranged in disorder, oocytes morphology was deformed, narrowed or disappeared, and the infiltration of ovarian interstitial lymphocytes in mice in aging intervention group was alleviated. Particellucida decreased, granulosa cell arrangement recovered neatly, oocytes morphology recovered regularly, size recovered moderately, and number increased (Figure 4, Table 3).

Effect of Yu Linzhu on mitochondria 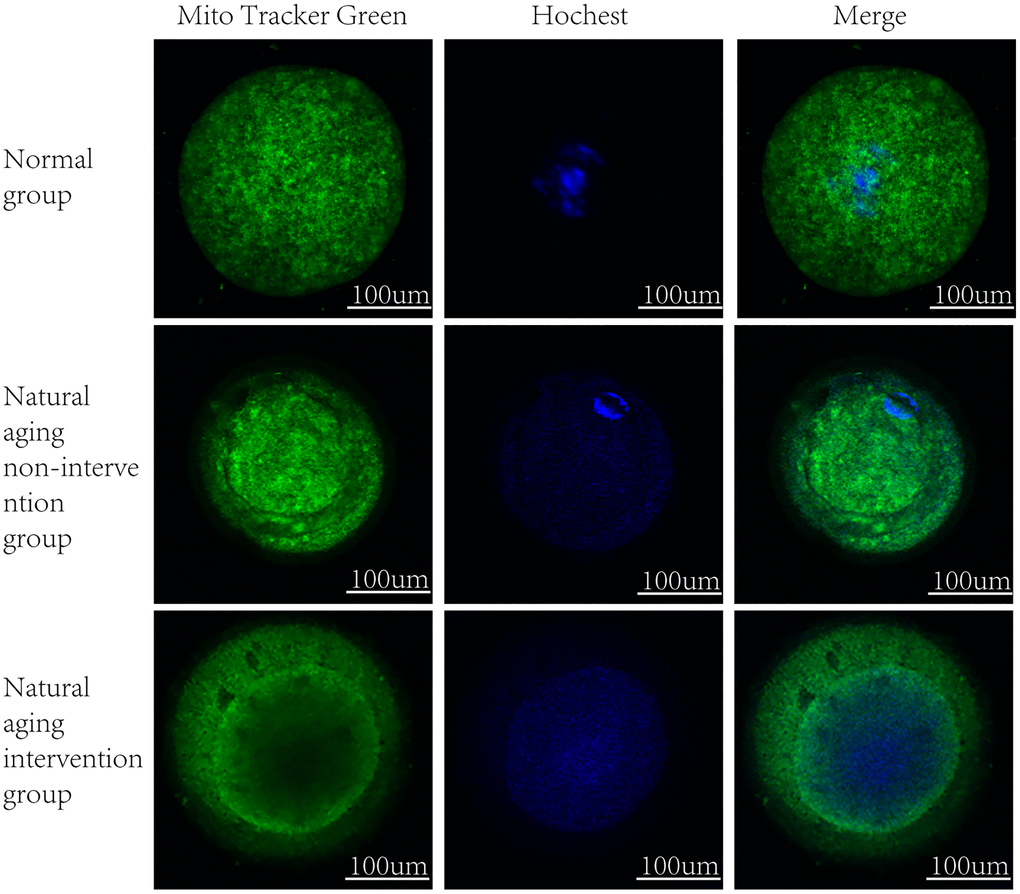 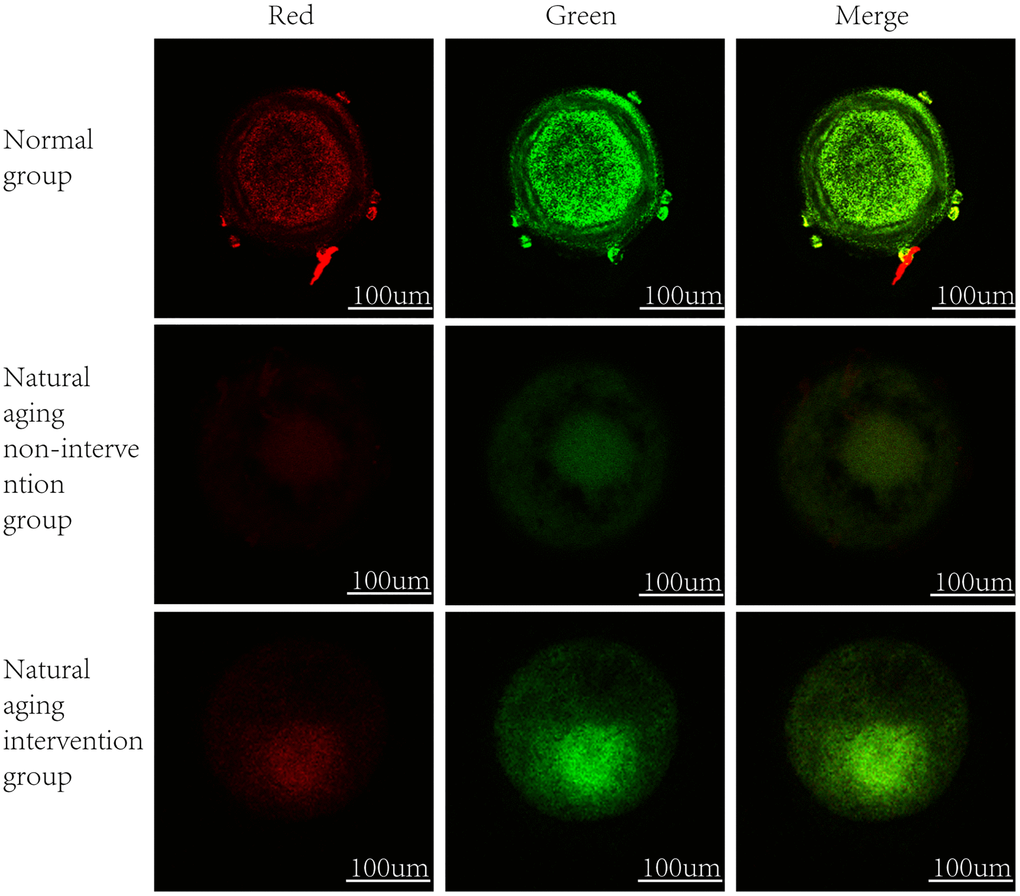 At present, the theory of oocyte aging mainly includes: aneuploidy theory, oxygen free radical-mitochondrial damage theory and so on. Mitochondria metabolize glucose into pyruvate and transport it to oocytes to generate ATP [8]. During the aging of higher organisms, the leakage of superoxide in respiratory chain and the damage cascade caused by reactive oxygen species, as well as mitochondrial metabolism during programmed cell death, have been the focus of research. A primordial follicle is the basic unit of germ cells. The follicle consists of oocytes and granulosa cells, including wall granulocytes and cumulus cells around oocytes (CCS). By secreting factors, oocytes upregulate the function of granulosa cells and improve the microenvironment of follicular and oocyte development ability [9]. Disordered follicles can lead to some reproductive problems, and increased ROS levels in oxidative stress can block the development of eggs in cystic follicles [10]. Ovarian senescence is mainly manifested in the decrease of oocyte quantity and quality, accompanied by the decrease of oocyte mitochondrial quantity, structural change and productivity. Mitochondria are the determinants of ovarian senescence. Oocyte quality is mainly changed by improving mitochondrial function and increasing the number of mitochondria [11]. Mitochondria are the main source of free radicals and ROS in cells. A large number of free radicals and ROS can lead to the further increase of ROS accumulation and mitochondrial DNA mutation, which leads to the exponential increase of mitochondrial mutation in malignant cycle. Then the synthesis of ATP decreased, resulting in cell cycle stagnation and even apoptosis. Mitochondria participates in the whole process of follicle development [12, 13]. De Bruin et al. found that mitochondrial fraction decreased and mitochondrial matrix density increased in the 38–45 age group [14]. ROS levels produced by mitochondrial respiratory function decreased with oocyte aging [15, 16].

In the theory of traditional Chinese Medicine, kidney dominates growth, development and reproduction. The Ming Dynasty Li Chan’s ‘Introduction to Medicine’ said: ‘People to middle age, kidney qi to deficiency.’ In the Ming Dynasty, Yu Tuan’s ‘Zhengzhuan of Medicine’ also said: ‘Abundant Kidney Qi brings longevity, kidney qi deficiency brings reduction in life-span.’ It can be seen that the aging of the human body begins with the aging of the kidney, and the life activities of the human body depend on the promotion of the kidney qi and essence. Once the kidney qi fails, the five-Zang also follow the failure. In the old age, the essence of the kidney is declining, which leads to the failure of other Zang functions, so it is necessary to take the method of tonifying the kidney and filling the essence and strengthening the life, so as to help generate qi and achieve the purpose of prolonging life and resisting aging.

In conclusion, the decline of fertility in POI women is due to the decrease of follicle number and egg quality after the decline of ovarian function. Mitochondria such as quantity, distribution and membrane potential activate oocyte and embryo development. As the most important organelle of oxidation reaction, by improving ovarian microenvironment, enhancing ovarian blood flow and restoring ovarian function, mitochondrial vitality, follicle development and fertility will be improved. Further understanding the relationship between mitochondria and ovarian senescence and exploring the mechanism of traditional Chinese medicine to improve the quality of oocytes will help to provide a more optimized strategy for the prevention and treatment of female senescence and improve its pregnancy rate.

The author(s) declared no potential conflicts of interest with respect to the research, authorship, and/or publication of this article.