Down syndrome and Alzheimer's disease: common molecular traits beyond the amyloid precursor protein 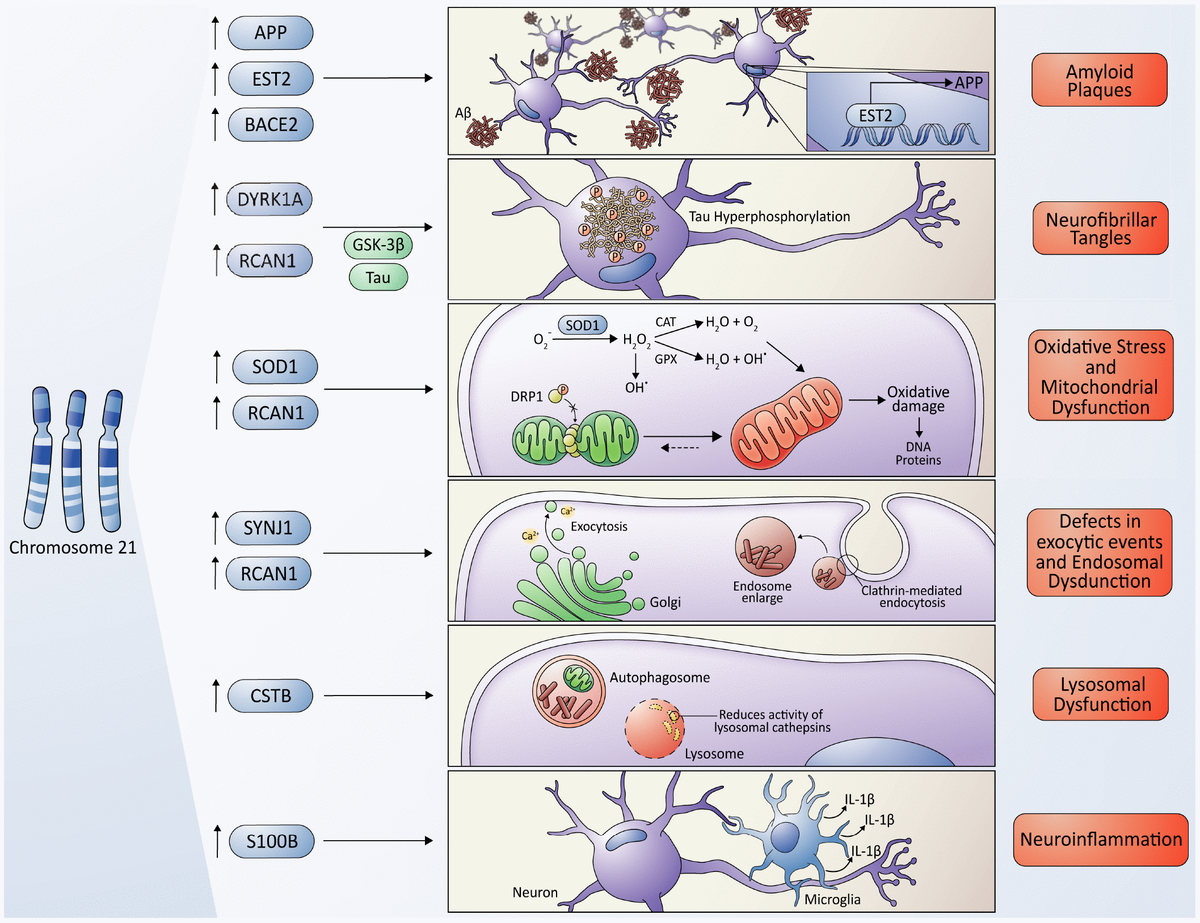 Figure 2. Molecular cross-talking between Down syndrome (DS) and Alzheimer's disease (AD). Overexpression of some genes located on chromosome 21 have been linked to the development of neuropathological characteristics of AD in DS some individuals, including the APP gene, which encodes the amyloid precursor protein, and the EST2 gene that encodes a transcription factor that promotes the expression of APP, give rise to the Aβ toxic peptides, which form the amyloid plaques. Also, the overexpression of RCAN1 and its activity as an inhibitor of the phosphatase Calcineurin contributes to the hyperphosphorylation of tau driven by some kinases, among them, the kinase encoded by the DIRK1A gene giving originating neurofibrillary tangles. SOD1 leads to an increase in ROS levels and oxidative stress due to an imbalance in the ratio of SOD1 and other antioxidant enzymes, resulting in a final accumulation of H2O2, that contributes to mitochondrial dysfunction, producing a higher quantity of ROS, characteristic of both pathologies. However, a protective role of SOD1 in DS/AD was also proposed due to an indirect reduction in Aβ cytotoxicity (please, see details in the main text); the RCAN1 gene has been linked to the increase in mitochondrial fusion, triggering an elongated mitochondrial network, which in turn increases ROS production. The gene encoding the phosphoinositide phosphatase synaptojanin 1 (SYNJ1), a key regulator of the signaling phospholipid phosphatidylinositol-4,5-biphosphate, has been linked to the endosomal dysfunction in DS and AD. Besides, APP processing takes place in the endosome/lysosome system as well. The Cystatin B (CSTB) gene functions as an endogenous lysosomal protease inhibitor, and it is found to inhibit the functions of cathepsins, contributing to dysfunction in lysosomal proteolysis. The astrocyte-derived cytokine S100B has been associated with the activation of glial cells, following by an increase in IL-1β in the nervous system, influencing the neuropathology of AD and DS.