Plasma dehydroepiandrosterone (DHEA) decreases ~80% between ages 25 and 75 yr. In a preliminary study, we found that 6 mo of DHEA replacement improved insulin action in elderly individuals. The purpose of the present larger, randomized double-blind study was to determine whether a longer period of DHEA replacement improves glucose tolerance. Fifty-seven men and 68 women aged 65 to 75 yr were randomly assigned to 50 mg DHEA or placebo once daily. Year one was a randomized, double blind trial. Year 2 was an open label continuation. DHEA replacement improved glucose tolerance in participants who had abnormal GT initially, reduced plasma triglycerides, and the inflammatory cytokines IL6 and TNFα.

This trial was registered at clinicaltrials.gov as NCT00182975.

Dehydroepiandrosterone (DHEA) and its sulfated form (DHEAS), which will be referred to together as DHEA, are secreted by the zona reticularis of the adrenal cortex only in humans and related primate species [1]. DHEA is present in far higher concentrations in plasma than any other steroid hormone [1]. Adrenal production of DHEA begins during puberty, peaks at ~20 yr and begins to decline with aging beginning at ~25 yr [2,3]. This decline is progressive and severe, resulting in a plasma DHEA level by age 75 yr that is ~80% lower than at 20 yr [2]. It has been reported that DHEA level predicts longevity in men [4]. Studies on laboratory rodents have shown that DHEA treatment reduces total and visceral fat accumulation and protects against development of muscle insulin resistance in response to a high fat diet [5,6], with advancing age [7], and in genetic obesity [8,9].

In a preliminary study to test the hypothesis that, as in rodents, DHEA replacement reduces adiposity and improves insulin action, we evaluated the effects of six months of DHEA treatment (50 mg/day) in a randomized controlled trial on 56 elderly women and men [10]. The DHEA treatment induced significant decreases in abdominal fat and in the insulin area under the oral glucose tolerance curve, without a change in glucose levels, providing evidence for an increase in insulin sensitivity. The present study was undertaken to determine whether a longer period of DHEA replacement improves both insulin action and glucose tolerance in elderly women and men.

Of the 659 people who initially expressed interest in the study, 335 did not meet the inclusion criteria and 188 chose not to participate (Figure 1). The remaining 136 eligible volunteers were randomized to one year of DHEA replacement, 50 mg daily, or placebo. After completing the 12 mo randomized study, 112 of the participants volunteered to continue in an open-label study for an additional 12 mo. In the open-label study, the participants who had been randomized to DHEA replacement continued taking DHEA for a second year, while those who had been in the placebo group crossed over to DHEA replacement for 12-mo. 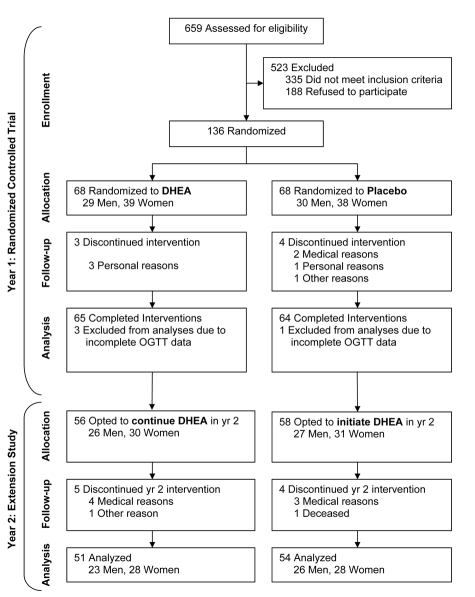 Figure 1. Consort diagram indicating sample sizes at each stage during the study

Table 1. Characteristics of the Participants

Table 2. Body Weight and Body Composition Before and After 12 months of DHEA

During the second year of DHEA replacement, body weight, total fat mass and trunk and appendicular fat masses did not change significantly in the men (data not shown). The men who crossed-over from placebo to DHEA had no significant changes in body weight or body fat during the 12 mo of DHEA replacement. The only change in body composition in the women who crossed over from placebo to 12 mo of DHEA was a 0.5 ± 0.2 kg (P<0.01) increase in fat free mass. 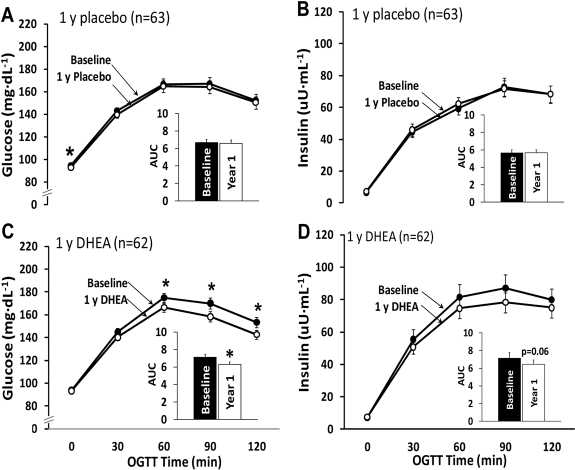 Figure 2. Oral glucose tolerance test results from the 1-yr randomized placebo-controlled trial. Changes in the areas under the curve for glucose and insulin did not differ significantly between the placebo group (panels A and B) and the DHEA group (panels C and D) (glucose, p=0.09; insulin, p=0.52). *p<0.05 for baseline to 1-yr change within group. AUC, area under the curve. 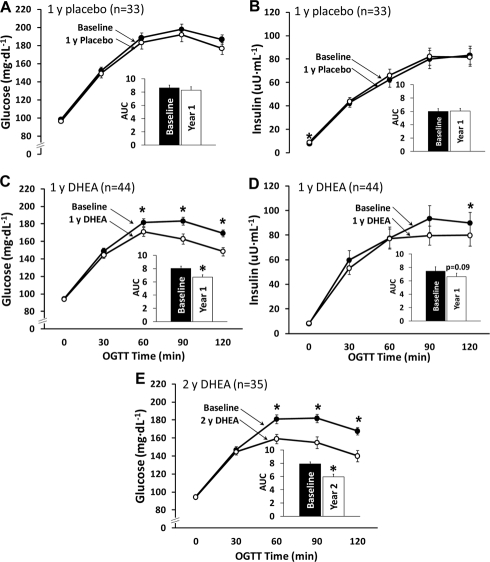 There were significant decreases in the plasma concentrations of TNFα and IL-6 in response to 1 year of DHEA replacement (Table 3).

There were 12 serious adverse events and 124 minor events, with no difference in frequency between groups.

Visceral fat, measured by MRI, decreased ~10% in both men and women [10]. This finding, together with the observation that DHEA protects laboratory rodents against visceral fat accumulation and insulin resistance with aging [7] and in response to high fat diets [5,6], led us to conclude that DHEA improves insulin action largely by reducing intra-abdominal fat [10].

Regarding mechanisms by which DHEA may reverse insulin resistance, one possibility is by activation of PPARα for which DHEA is a ligand [19,20]. Activated PPARα stimulates expression of the mitochondrial enzymes involved in fat oxidation and represses activation of enzymes involved in fat synthesis[20,21]. As a result, PPARα activation lowers triglycerides [21], and could result in less fat deposition in liver and muscle. PPARα activation also suppresses inflamemation [21], and DHEA has been shown to inhibit nuclear factor Kappa B and production of IL-6 and TNFα by various cell types, and to lower circulating levels of these inflammatory cytokines [22-26]. Chronic inflammation in adipose tissue and macrophages is thought to be one of the factors that mediates insulin resistance [27,28]. In the present study, DHEA replacement resulted in significant reductions in plasma IL-6 and TNFα, suggesting a decrease in inflammation. It is of interest relative to a role of PPARα activation in the improvement in insulin action induced by DHEA, that fibrates, which mediate their effects on lipid metabolism by activating PPARα [21], have also been reported to improve insulin action and glucose tolerance [29-36].

Another mechanism by which DHEA or some of its metabolites might enhance insulin action is by improving impaired activation of phosphatidyl inositol 3-kinase and Akt/PkB by insulin in insulin resistant muscle [37-39]. It is interesting in this regard that 17α-ethynyl-5-androstene-3β, 7β, 17β triol, an analog of a DHEA metabolite, enhances insulin-stimulated Akt/PkB phosphorylation in muscle, and improves muscle and liver insulin sensitivity and glucose tolerance in Zucker diabetic rats and improves insulin sensitivity in insulin resistant humans [37].

In conclusion, the results of this study confirm our previous finding that DHEA replacement in elderly men and women improves insulin action [10]. They further show that a longer period of DHEA treatment than was evaluated in our previous study, 12 mo vs. 6 mo, also significantly improves glucose tolerance, and that this improvement occurs only in those individuals who have abnormal glucose tolerance. These findings raise the possibility that DHEA could become a first line treatment for glucose intolerance/insulin resistance and diabetes prevention in older individuals and ameliorate the increase in chronic inflammation that occurs with aging.

Men and women, aged 65-75y were recruited from the Saint Louis area. Screening included a medical history, physical examination, blood chemistry analysis, hematology, urinalysis, and electrocardiography. Volunteers were excluded if they were current smokers or if they had evidence of chronic infection, a history or evidence of malignancy within the past 5 yr, clinical cardiovascular disease, advanced emphysema, advanced Parkinson's disease, resting blood pressure >170 mmHg systolic or >100 mmHg diastolic, or diabetes (self-report or fasting plasma glucose ≥ 126 mg/dL). Participants taking medications were required to maintain stable dosing regimens for six months prior to the study. Informed written consent was obtained from the participants, and the study was approved by the Human Research Protection Office at Washington University School of Medicine.

Participants were randomized to 12 months of 50 mg/d DHEA or placebo. Both groups received multivitamin and calcium/vitamin D supplements and were advised to maintain their usual diet and physical activity. During monthly meetings with the study nurse, participants received a month's supply of DHEA or placebo, had pill counts performed, and were questioned about adverse events, changes in activity level, diet, and medications.

OGTTs (75g) were started in the morning after an overnight fast. The study dietitian instructed the participants to consume ≥ 250 g/day carbohydrate for the three days preceding the test. Plasma glucose and insulin were measured using the glucose oxidase method (model 2300 Stat Plus, YSI Inc., Yellow Springs, Ohio) and radioimmunoassay [40]. Incremental area under the curve (AUC) was calculated for OGTT glucose and insulin values by the trapezoidal method [41]. Because of technical problems year 2 insulin data were not available. Although volunteers with self-reported diabetes or a fasting plasma glucose ≥126 mg/dL were excluded from the study, results from the baseline OGTT indicated that 16 of the enrolled participants had diabetes based on a 2-hr glucose ≥200 mg/dL. These participants were not excluded.