Mitochondrial function is central to longevity and an imbalance in mitonuclear protein homeostasis activates a protective response called the mitochondrial unfolded protein response (UPRmt). Toxic compounds damaging mitochondria trigger the UPRmt, but at sublethal doses these insults extend lifespan in simple animals like C. elegans. Mitochondria are the main energy suppliers in eukaryotes, but it is not known if diet influences the UPRmt. High dietary glucose reduces lifespan in worms, and we show that high dietary glucose activates the UPRmt to protect against lifespan reduction. While lifelong exposure to glucose reduces lifespan, glucose exposure restricted to developing animals extends lifespan and requires the UPRmt. However, this lifespan extension is abolished by further mitochondrial stress in adult animals. We demonstrate that dietary conditions regulate mitochondrial homeostasis, where induction of the UPRmt during development extends lifespan, but prolonged activation into adulthood reduces lifespan.

Mitochondria are the powerhouses of the cell, and a consequence of their energy production is the generation of reactive oxygen species (ROS) that may contribute to cellular damage, protein misfolding and ultimately aging [1,2]. Accompanying aging is a decline in the cell's capacity to mitigate damage from ROS and maintain protein homeostasis. Threats to mitochondrial protein homeostasis are reduced in part due to the activity of chaperones like HSP-6 and HSP-60 that are known to combat age-related dysfunction as part of the mitochondrial unfolded protein response (UPRmt) [3]. The UPRmt has received considerable attention in recent years as it has been revealed that its role may not be limited to stress response but may also regulate longevity [1,4]. Although the UPRmt is activated against damaging environmental conditions and toxins, it is not known if an organism's dietary status contributes to mitochondrial surveillance mechanisms. We previously reported that C. elegans subjected to high dietary glucose were protected against proteotoxicity and environmental stress [5], but had shortened lifespans as previously observed [6]. We wondered whether or not the UPRmt had a role in mediating longevity phenotypes associated with high dietary glucose.

The mitochondrial chaperone reporters hsp-6p::GFP and hsp-60p::GFP show increased expression in C. elegans intestinal tissue as part of the UPRmt [3]. Cultivation of worms under high dietary glucose conditions led to a dose-dependent increase in the expression of hsp-6p::GFP (Fig. 1a), but no change was observed for hsp-60p::GFP (Supp. Fig. 1). Induction of hsp-6p::GFP expression was specific to glucose, as other dietary compounds including trehalose, methionine or oleic-acid had no effect (Fig. 1b). In C. elegans the transcription factors ATFS-1 [7] and DVE-1 [8] are required for induction of the UPRmt, as is the ubiquitin-like protein UBL-5. We turned to well characterized translational reporters for dve-1 and ubl-5 [1,3,8] to investigate the possible role of dietary glucose in activation of the UPRmt. We observed that high dietary glucose increased expression of the dve-1p::dve-1::GFP reporter (Fig. 1c-d) but did not affect the expression of ubl-5p::ubl-5::GFP (Supp. Fig. 1). We next investigated if the transcription factors atfs-1 or dve-1 were functionally required for UPRmt induction. RNAi mediated knockdown of either atfs-1 or dve-1 abolished the induction of hsp-6p::GFP by high dietary glucose (Fig. 1e-f). These data suggest that a specific subset of the UPRmt acts to mitigate potential cytotoxic effects from dietary sources. 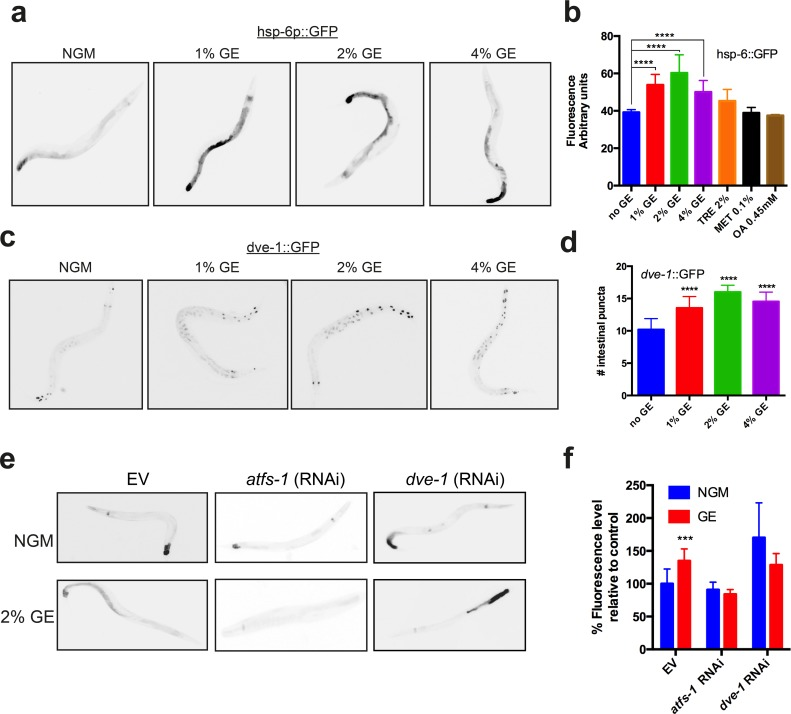 The UPRmt declines during aging

The induction of hsp-6p::GFP by high dietary glucose was observed in young adult animals (Fig. 1a). It has been hypothesized that aging may occur partly from an age-related decline of protein homeostasis mechanisms [9], thus we wondered if the induction of hsp-6p::GFP by glucose was maintained in aging animals. We observed that exposure to high dietary glucose at three concentrations induced the expression of hsp-6p::GFP in animals at days 1 and 3 (Fig. 2a, b) of adulthood, but this induction was lost in animals at days 5 or 9 of adulthood (Fig. 2c, d). To inspect the morphology of the mitochondrial network we used transgenic worms expressing a mitochondrial targeted signal in muscles cells [3]. Normally the mitochondrial network appears as tubular, parallel structures in muscle tissue [1,10]. 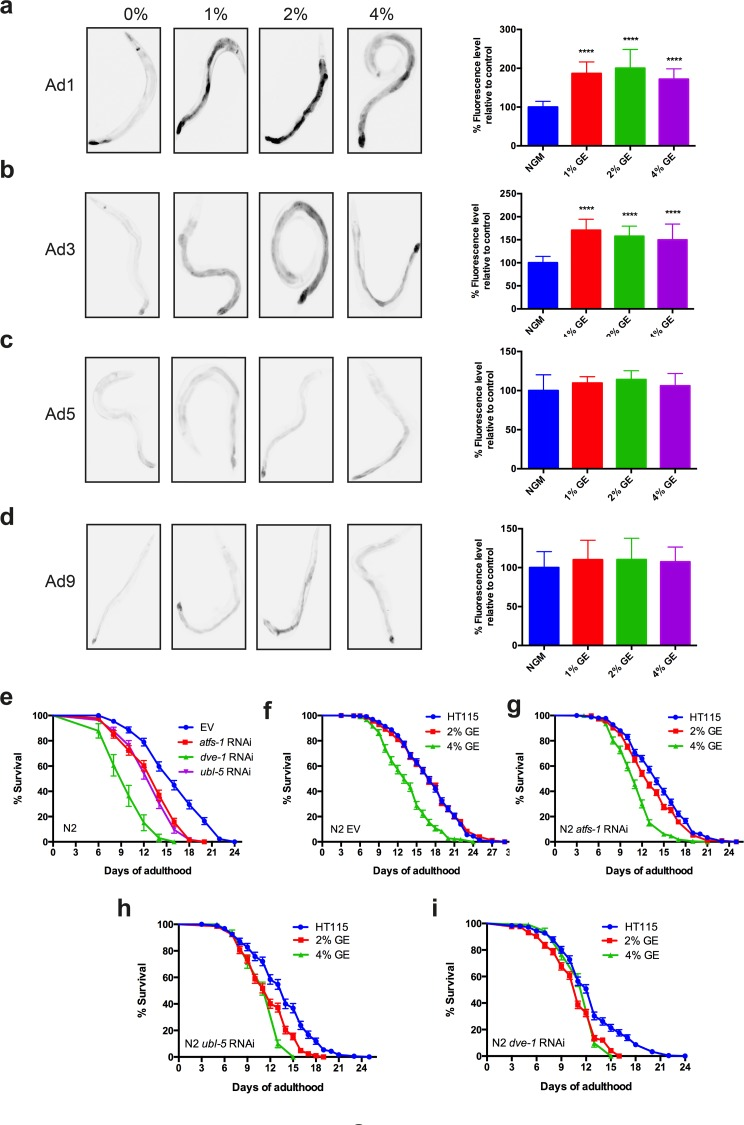 We next investigated whether the UPRmt protects against glucose-induced reduction of lifespan in adult animals. Wild type N2 animals exposed to RNAi against atfs-1, dve-1, or ubl-5 all showed decreased lifespan suggesting that a fully-functional UPRmt is necessary for promoting longevity (Fig 2e). Wild type N2 worms exposed to 2% glucose had lifespan similar to untreated controls, but exposure to 4% glucose reduced lifespan (Fig 2f). Interestingly, lifespan was reduced in worms exposed to either 2% or 4% glucose and treated with atfs-1, dve-1 or ubl-5 (RNAi) (Fig 2g-i). These data demonstrate that 2% glucose becomes toxic and reduces lifespan in the absence of a functional UPRmt, thus the UPRmt may protect organisms against cytotoxicity from dietary sources.

The induction of hsp-6p::GFP by glucose does not indicate if the UPRmt is activated to mitigate the toxic effects of glucose, or instead mediates the protective effects of high dietary glucose. Activation of the UPRmt has been observed after inhibition of mitochondrial DNA (mtDNA) translation, or mtDNA depletion and is involved in longevity phenotypes [1]. Furthermore, the loss of UPRmt results in increased susceptibility to stress, while prolonged induction reduces lifespan (12-14). To delineate the role of the UPRmt in glucose-mediated aging phenotypes, we investigated whether activation of the UPRmt by high dietary glucose could be the cause of glucose-dependent lifespan reduction. Wild-type animals exposed to high dietary glucose for their entire life had reduced lifespan compared to untreated animals, in agreement with previous findings by us [5] and others [6] (Fig 3a). Surprisingly, animals exposed to glucose (2% and 4%) only until the pre-adult L4 larval stage, showed the opposite effect with significant lifespan extension (Fig. 3b). Furthermore, exposing worms to high dietary glucose only during adulthood reduced lifespan compared to control animals (Fig. 3c), suggesting a lifespan-promoting role of glucose during development that becomes deleterious at later adult stages. To determine if the augmented lifespan effect of early glucose exposure was dependent on the UPRmt, we investigated the contribution of the transcription factor ATFS-1, which is a master regulator of the UPRmt [7]. We exposed afts-1(gk3094) and atfs-1(et15) mutants to high dietary glucose from hatching until the L4 larval stage and observed that the enhanced longevity phenotype was lost (Fig. 3d,e). These data suggest that endogenous UPRmt activity via ATFS-1 is required for regulating glucose-dependent lifespan phenotypes. 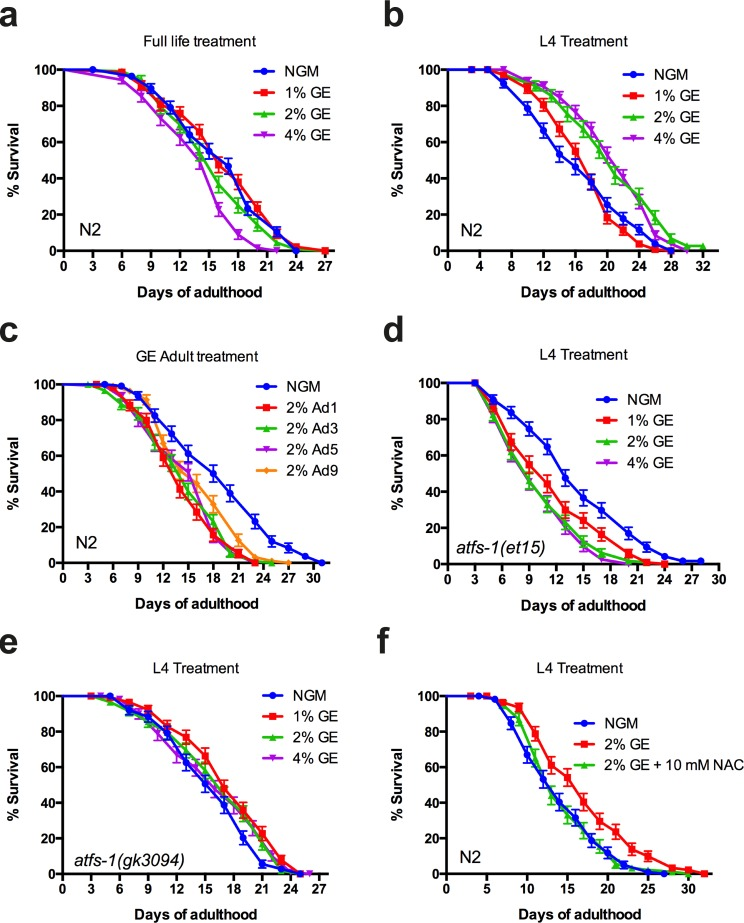 Mitochondria are the major ROS producers at the cellular level and it has long been proposed that ROS molecules and by-products are responsible for organismal aging (15). Recent work suggested that ROS rather acts as a signalling molecule with important roles in regulating longevity [11,12]. This phenomenon is known as mitohormesis [13] and the protective effects are lost in the presence of antioxidant compounds. Thus we wondered if the lifespan enhancing effect from early glucose exposure utilized a mitohormetic mechanism requiring ROS. We observed that animals treated with 10 mM N-acetyl cysteine did not have increased lifespan when exposed to high dietary glucose until the L4 stage GE (Fig. 3f). These data suggest a role for oxidative stress in glucose mediated lifespan extension when applied at early, pre-adulthood stages.

Mutations that disrupt mitochondrial function can result in severe pathologies, and mitochondrial dysfunction is linked to multiple neurodegenerative disorders in humans (19-21). Surprisingly, electron transport chain (ETC) dysfunction can extend lifespan not only in C. elegans but also in Drosophila and mice [14]. Thus, we wondered if ETC function was required for the temporal effects on lifespan from high dietary glucose. We observed that the ETC complex II mutant mev-1(kn1) and the complex III mutant isp-1(qm150) strains showed no increase in lifespan when exposed to high dietary glucose until the L4 larval stage (Supp. Fig. 3). These data suggest that functional mitochondria are required for the increased lifespan from early exposure to high dietary glucose. This is consistent with the previous studies demonstrating that lifespan extending interventions can only be produced at late larval stages (L3/L4) when mitochondrial biogenesis is at it's peak [15].

Activation of the UPRmt during adulthood abolishes lifespan extension

Worms were treated with glucose during larval development and then grown on control NGM. At different aging stages, the animals were transferred to cytochrome c-oxydase cco-1(RNAi) plates for a 12h period. cco-1(RNAi) is known to induce the UPRmt by disrupting ETC function, and knockdown of this gene during development has been reported to mimic ETC dysfunction with similar longevity phenotypes to knockdown of other ETC genes [16]. Worms grown on NGM and placed on cco-1 RNAi as adults showed no hsp-6::GFP increased expression, consistent with the temporal activation of the UPRmt [17] (Fig. 4). Similar to untreated animals, nematodes exposed to dietary glucose early in life showed no increase in hsp-6::GFP expression. However, animals treated with glucose during development plus adult specific cco-1 RNAi had increased hsp-6::GFP expression (Fig. 4a). This effect was sustained until adult day 5 for all glucose concentrations tested (Fig. 4b, c) and was lost at adult day 9 for the lowest concentration (1%) (Fig. 4d). We wondered if there were functional consequences of additional mitochondrial stress during adulthood on lifespan. We observed that worms grown on NGM plates and exposed to cco-1(RNAi) at day 1 of adulthood had lifespans similar to untreated controls (Fig 4e). We then tested animals that had been exposed to either 2% or 4% GE during development, and then exposed them to cco-1(RNAi) at day 1 of adulthood, and observed that lifespan was reduced compared to control animals (Fig. 4f, g). Thus, early exposure to mitochondrial stress can increase lifespan, but this is a fragile phenotype since further induction of the UPRmt during adulthood results in lifespan reduction. 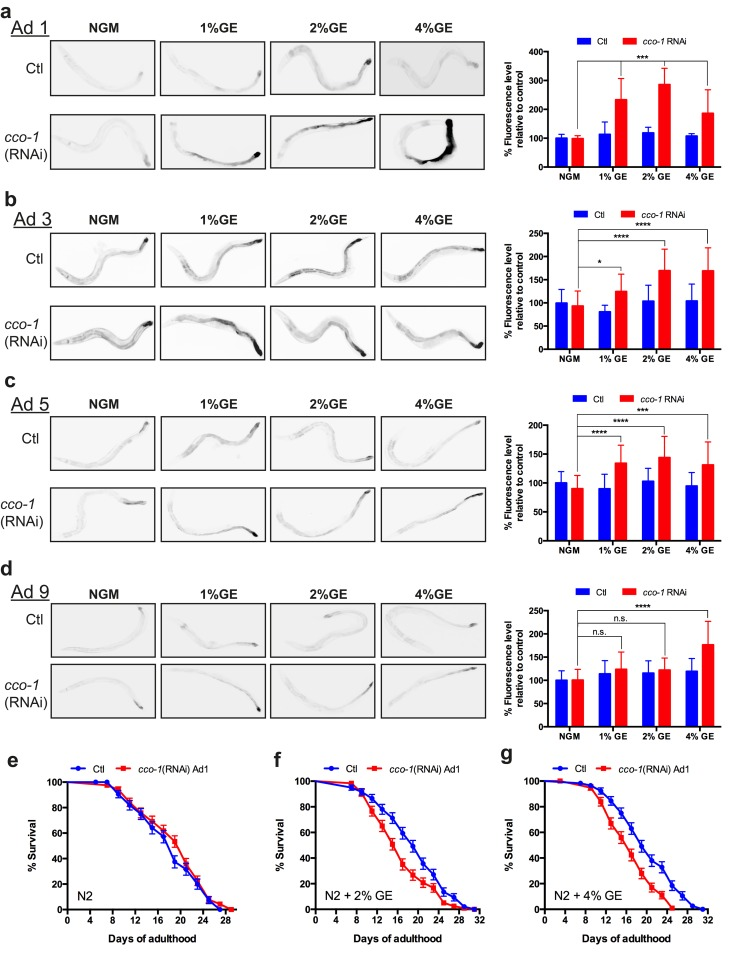 Our study reveals a novel role of dietary glucose in regulating lifespan in C. elegans. Exposure to high dietary glucose during adulthood reduces lifespan, whereas glucose exposure restricted to developing animals has the opposite effect and extends lifespan. It is believed that mitochondrial oxidants may be responsible for mitochondria communicating to their cellular host resulting in an organism-wise shift to stress resistance and pro-longevity phenotypes [18]. High glucose concentrations are associated with a number of negative phenotypes, including decreased lifespan in C. elegans as well as mitochondrial dysfunction and oxidative stress in other organisms [6,19]. Consistently, impairing glucose metabolism extends lifespan in worms most likely via a ROS dependent signalling mechanism [12]. Altogether these studies paint a contradictory picture where both increased or decreased mitochondrial respiration are associated with increased lifespan. It may be that altered ROS signalling from dysregulated mitochondrial respiration triggers a hormetic response leading to increased lifespan [18].

Our data suggests that timing and duration may be an important factor in whether mitochondrial stress results in positive or negative effects on lifespan. High dietary glucose during development extends lifespan, requires UPRmt genes but does induce strong activation of the UPRmt. However, high dietary glucose exposure during adulthood does induce an UPRmt response and is associated with decreased lifespan. Thus glucose acts a stress at the cellular and mitochondrial level that limits lifespan if not alleviated during adulthood. These effects are consistent with the hyperfunction theory of aging that suggest cellular pathways activated during development can accelerate aging if activity is maintained during adulthood [20].

Animals were immobilized in M9 with 5 mM levamisole and mounted on slides with 2% agarose pads. Animals were visualized with a Leica 6000 and a Leica DFC 480 camera. A minimum of 30 animals was scored per treatment over 3 trials. Mito-GFP animals were visualized at days 1, 5 and 9 of adulthood with a Leica TCS_SP5 confocal microscope and analyzed with LAS AF software. The mean and SEM were calculated for each trial and two-tailed t-tests were used for statistical analysis.

Worms were grown on NGM or NGM + 1%, 2% or 4% glucose and transferred on NGM or NGM + glucose. 30-40 animals/plate by triplicates were tested at 20°C from adult day 1 until death. Worms were declared dead if they didn't respond to tactile or heat stimulus.

For paralysis and stress-resistance tests, survival curves were generated and compared using the Log-rank (Mantel-Cox) test, and a 60-100 animals were tested per genotype and repeated at least three times.

The authors declare no conflict of interests.