Copyright © 2019 Zheng et al. This is an open-access article distributed under the terms of the Creative Commons Attribution (CC BY 3.0) License, which permits unrestricted use, distribution, and reproduction in any medium, provided the original author and source are credited.

One group of rats was subjected to abdominal aortic constriction (AAC) surgery, while a second group underwent sham surgery. Twenty weeks later, significant cardiac hypertrophy was observed in the AAC group compared to the Sham group. Both raw heart weight and heart weight normalized to body weight differed between the two groups (P <0.001, Table 1). These data demonstrated that cardiac hypertrophy was successfully induced in the 20-week AAC model. All subsequent experiments were performed 20 weeks post-operation. Fasting blood glucose levels also differed between the AAC and Sham groups (P <0.05), but levels for both groups were within the normal range (Table 1). During the insulin clamp experiment, GIR did not significantly differ between the AAC and Sham groups (P > 0.05), suggesting that 20 weeks of abdominal aortic coarctation did not induce systemic insulin resistance in the AAC group (Table 1). These data demonstrated that AAC-induced cardiac hypertrophy is not associated with systemic insulin resistance.

Western blot indicated that p38 MAPK protein expression was lower in the AAC group than in the Sham group (P < 0.05, Figure 1). 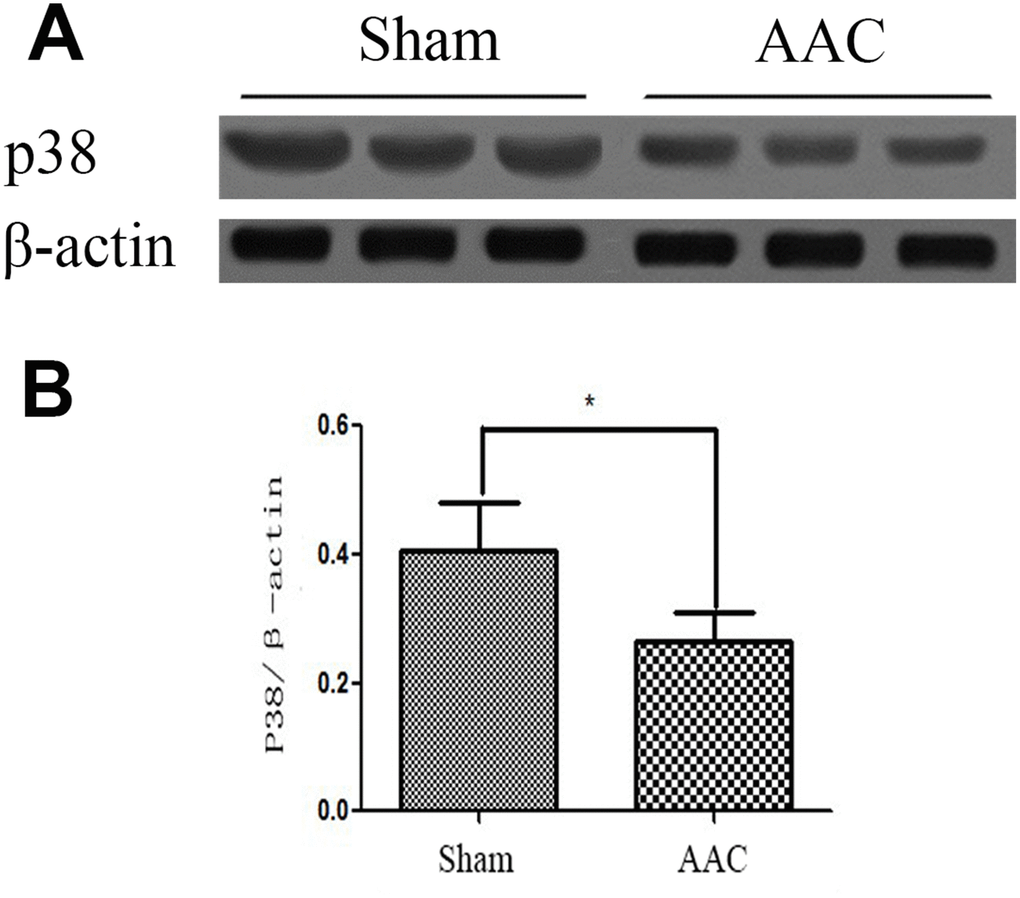 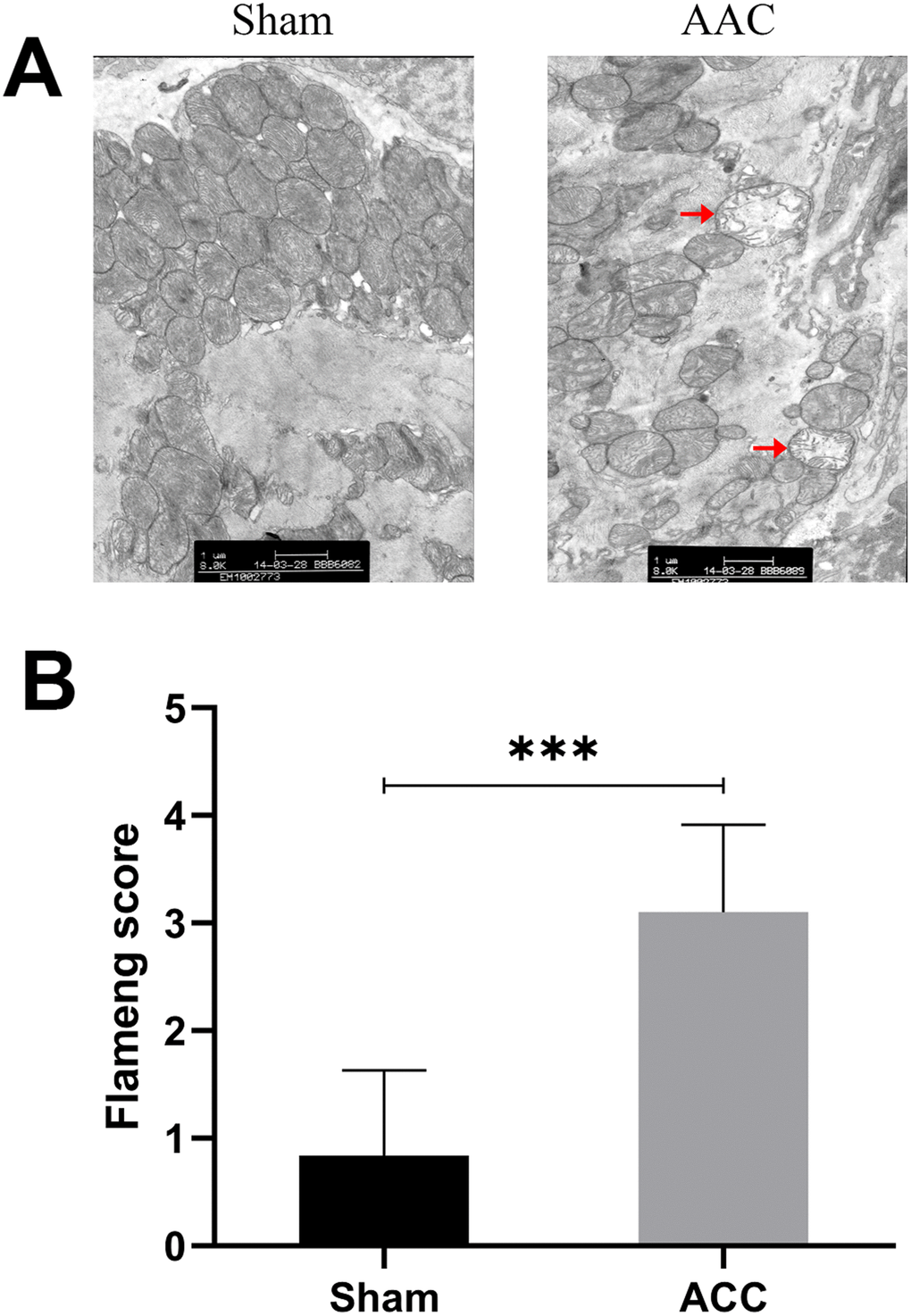 Insulin resistance (IR) is characterized by a series of pathophysiological changes that lead to decreased sensitivity to insulin. It affects substrate oxidation and a variety of cell functions, and it can contribute to a variety of diseases. Because insulin resistance is observed not only in type 2 diabetes, but also in a wide variety of diseases and pathological conditions, Reaven developed the concept of “insulin resistance syndrome (IRS) “[6]. In 1995, Stem proposed the “common soil theory,” which posits that insulin resistance is a common risk factor for hypertension, diabetes, heart disease, and stroke [7]. Previous studies of IR have focused on traditional target organs, such as the liver, skeletal muscle, and adipose tissue, but not on the myocardium, which is typically examined only in the context of chronic disease development. However, other studies have shown that myocardium is also an important target tissue for insulin resistance [8].

The following have been proposed as the main mechanisms underlying insulin resistance: (1) genetic variation leading to abnormal insulin structure and biological activity; (2) insulin and post-insulin receptor defects in target tissue; and (3) increases in substances that antagonize the physiological role of insulin, such as catecholamines, growth hormone, glucagon, insulin antibodies, glucocorticoids, and insulin receptor antibodies.

Insulin-stimulated glucose uptake is widely recognized as a sign of insulin sensitivity, but insulin also plays an important biological role in substrate oxidation processes. For example, insulin promotes glycolysis and glucose oxidation independently from its effects on glucose uptake [10]. Insulin can also activate glycogen synthesis; notably, insulin resistance in patients with type 2 diabetes is characterized by impaired glucose oxidation and glycogen synthesis [11]. Insulin is also involved in the regulation of cell growth and mitochondrial biotransformation-related gene expression, in addition to the acute effects of blood glucose metabolism [12]. We found that insulin-induced decreases in fatty acid oxidation were greater in the AAC group, further linking cardiac hypertrophy to myocardial insulin resistance.

The heart requires a large amount of energy, and glucose and fatty acids provide more than 90% of the energy for ATP synthesis in the heart. When insulin resistance occurs, glucose uptake and utilization is reduced, leading to energy deficiency and cardiac dysfunction. In the AAC group, echocardiography revealed that left ventricular posterior wall thickness increased 20 weeks after abdominal aortic coarctation; together with isolated heart perfusion test results and increased heart weights, these results suggest that the AAC group showed significant cardiac hypertrophy. Furthermore, left ventricular dilatation, ejection fraction, and short axis-shortening index decreased in the AAC group. The maximum left ventricular diastolic pressure change rate was also decreased in the AAC group. In combination with the isolated heart perfusion test, this indicated that left ventricular systolic and diastolic function was impaired in the AAC group (P < 0.001). In addition, mitochondrial granules, rupture, and inner and outer membrane integrity were lost, and other pathological changes were observed in the mitochondria of the myocardium.

The biological effects of insulin are carried out through the signal transduction process and include the following steps: (1) insulin receptor activation; (2) insulin receptor substrate (IRS) phosphorylation; (3) src homology protein binding; and (4) protein kinase and phosphatase signaling cascades [13]. Impairments of any part of the insulin signaling pathway can lead to insulin resistance [14]. We measured p38 protein kinase level and found that p38 MAPK protein expression was significantly lower in hypertrophic myocardium than in the Sham group. Protein kinase p38 is an important member of the MAPK family and plays a key role in mitochondrial biosynthesis. P38 MAPK activates PGC-1 via post-transcriptional regulation and can directly phosphorylate PGC-1 protein, making it active and stable [15]. The main biological function of PGC-1 is to upregulate oxidative metabolism by stimulating myocardial mitochondrial biosynthesis and metabolic gene expression [16]. Reduced p38 protein kinase signal transduction can therefore cause both reduced mitochondrial biosynthesis and oxidative dysfunction.

Abdominal aortic constriction was carried out as described by Phrommintikul et al. with modifications [17]. The rats were weighed and anesthetized with 10% chloral hydrate (0.3ml/100g). Under sterile conditions, an incision was made along the abdominal midline, 4 cm away from the xiphoid process. The incision was sutured in layers and the animals were injected with penicillin prophylaxis. Sham-operated animals serving as controls were subjected to the same surgical procedure except that the aorta was not constricted. After surgery in a standard animal laboratory laminar flow cabinet, the animals were given fresh drinking water and full price nutritional feed from Shanghai Shi Lake Company for 20 weeks.

Cardiac functions were examined using the Visual Sonics’ Vevo 770TM high-resolution small animal ultrasound system for 20 weeks after operation. Cardiac function was evaluated in EKV mode and M-mode, and the diastolic function of the heart was measured by Doppler’s mitral flow measurement.

All rats were fasted for 12 hours before the hyperinsulinemia-normal blood glucose clamp test was performed. 10% chloral hydrate (0.3ml/100g) was then used for intraperitoneal anesthesia and the bilateral artery and femoral vein were exposed and intubated with silicone rubber catheters (diameter 0.6mm, diameter 1mm); heparin was administered (75 U/kg for initially followed by 25 U/kg per hour) as an anticoagulant. The right femoral artery channel was used for blood glucose measurement, while an infusion pump was used to deliver a constant dose of fast-acting insulin (6.0 mU/kg/min) into the right femoral vein. Basal blood glucose (BBG) levels were measured in a 10 μL sample before infusion. The infusion rate of a 10% glucose solution was adjusted to maintain blood sugar levels close to the initial fasting blood glucose level (BBG ± 0.5 mmol/L), and depth of anesthesia was monitored. The experiment lasted for 120 minutes in total; blood glucose levels and glucose infusion rate (GIR) after 60 minutes were used to establish the insulin sensitivity index for all rats.

Hearts were isolated and suspended on the Langendorff perfusion system. After 5-10 minutes of regular perfusion, hearts were perfused with KH solution containing glucose and palmitic acid and primed in KH solution with insulin (1 mU/mL) for 30 minutes; the liquid was collected every 5 minutes. 2 mL samples were taken from the effluent of the coronary arteries and centrifuged at 1000 rpm for 5 min. The supernatant was extracted and placed in an EP tube. The cells were labeled with an automatic biochemical analyzer. Free fatty acid and glucose concentration were measured in the perfusion fluid (with or without insulin) before and after cardiac perfusion. Basal glucose and fatty acid oxidation rates and insulin-stimulated changes in those rates and in absolute glucose and fatty acid oxidation levels were calculated. Perfusion liquid volumes were also measured to determine coronary flow rates. After the experiment, hearts were cut and placed in an oven set at 90 ° C for 12 hours to dehydrate completely; the dry weight of the hearts was then measured.

Twelve rats were divided into two groups and sacrificed as described in the invitro perfusion procedure. The aorta was then intubated and retrograde perfusion of the myocardium was performed using Krebs-Henseleit buffer with glucose and palmitic acid with or without insulin (1mU / mL) to complete invitro insulin stimulation and control experiments. The left ventricular myocardium was then placed in liquid nitrogen. p38 MAPK expression was measured in cardiomyocytes of the hypertrophic myocardium by Western blotting.

The authors of this manuscript have no conflicts of interest to declare.

This study was supported by grants from the health department of Fujian Province, China (No.2012-CXB-45) and funds for innovation and enterprises of high-level talents of Quanzhou, China (NO.2018C069R).