Copyright: © 2020 Lee et al. This is an open access article distributed under the terms of the Creative Commons Attribution License (CC BY 3.0), which permits unrestricted use, distribution, and reproduction in any medium, provided the original author and source are credited.

Telomeres are tandem repeats of the base pairs TTAGGG at the ends of mammalian chromosomes. Telomere length (TL) is an indicator of replicative history and the replicative potential of cells. Therefore, telomeres serve as mitotic clocks [1]. TL is highly variable and the mean TL is a biomarker of aging, with a shorter TL indicating increased biological age [2, 3]. Previous studies have demonstrated varying degrees of negative correlations between age and TL [1, 3–7]. However, to our knowledge, no study has investigated the association between age and TL in Korean individuals. Therefore, we conducted this multicenter study to identify the overall correlation between age and TL in Koreans.

The prevalence of Alzheimer’s disease (AD), a common and severe neurodegenerative disorder, is rapidly increasing in given the aging population worldwide [8]. Several studies have reported an association between a short TL and AD [9–12]. Oxidative stress, inflammation, immune reactions, stress, and microglial cell degeneration in AD have been suggested as risk factors for telomere shortening [13]. In contrast, some studies have reported that TL is not always shorter in patients with AD than in individuals without AD [13–15]. Both short and long TLs have been associated with an increased risk of dementia [15–17]. These inconsistent results make it more difficult to understand the underlying relationship between TL and AD. Therefore, this study aimed compare the association between age and TL in healthy Korean individuals and with that in individuals with mild cognitive impairment (MCI) and AD.

Table 1. Patient characteristics according to sex.

There was an overall significant negative correlation between age and TL (Figure 1). Multivariable linear regression analysis showed an approximate decrease of 37 bp of TL per 1-year increase in age in participants (B=-0.037; P=0.002; Table 2). 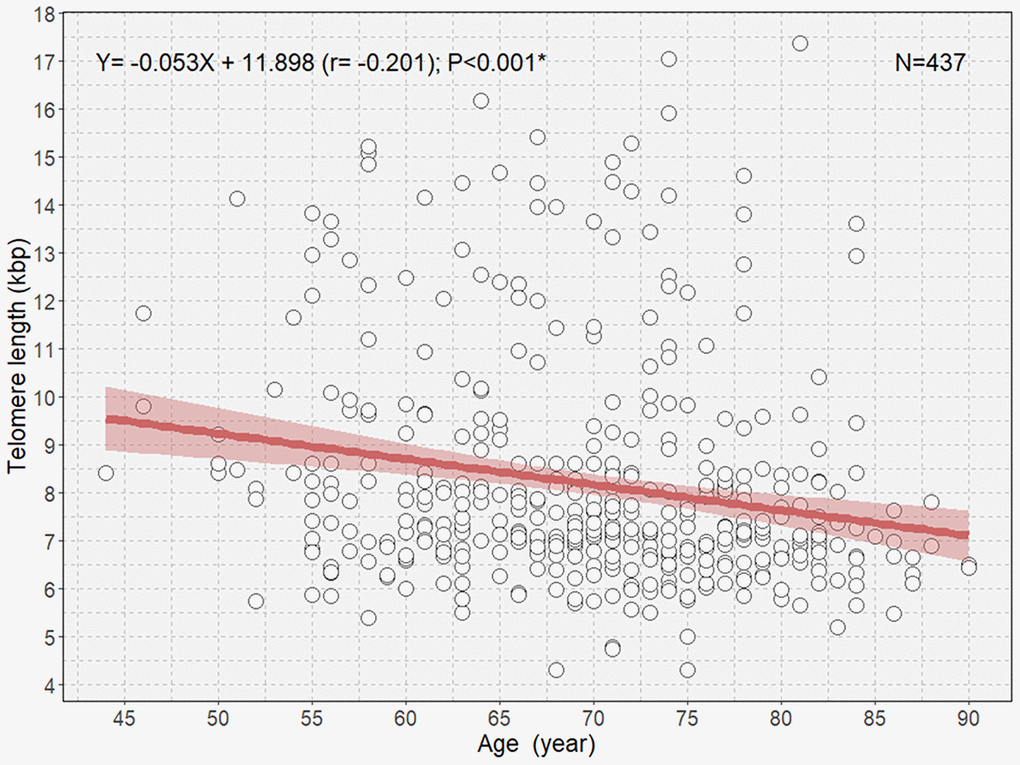 Figure 1. Scatterplot with a linear regression line and 95% confidence interval showing the association between age and telomere length in all participants. *P<0.05.

Associations between age and telomere length according to sex 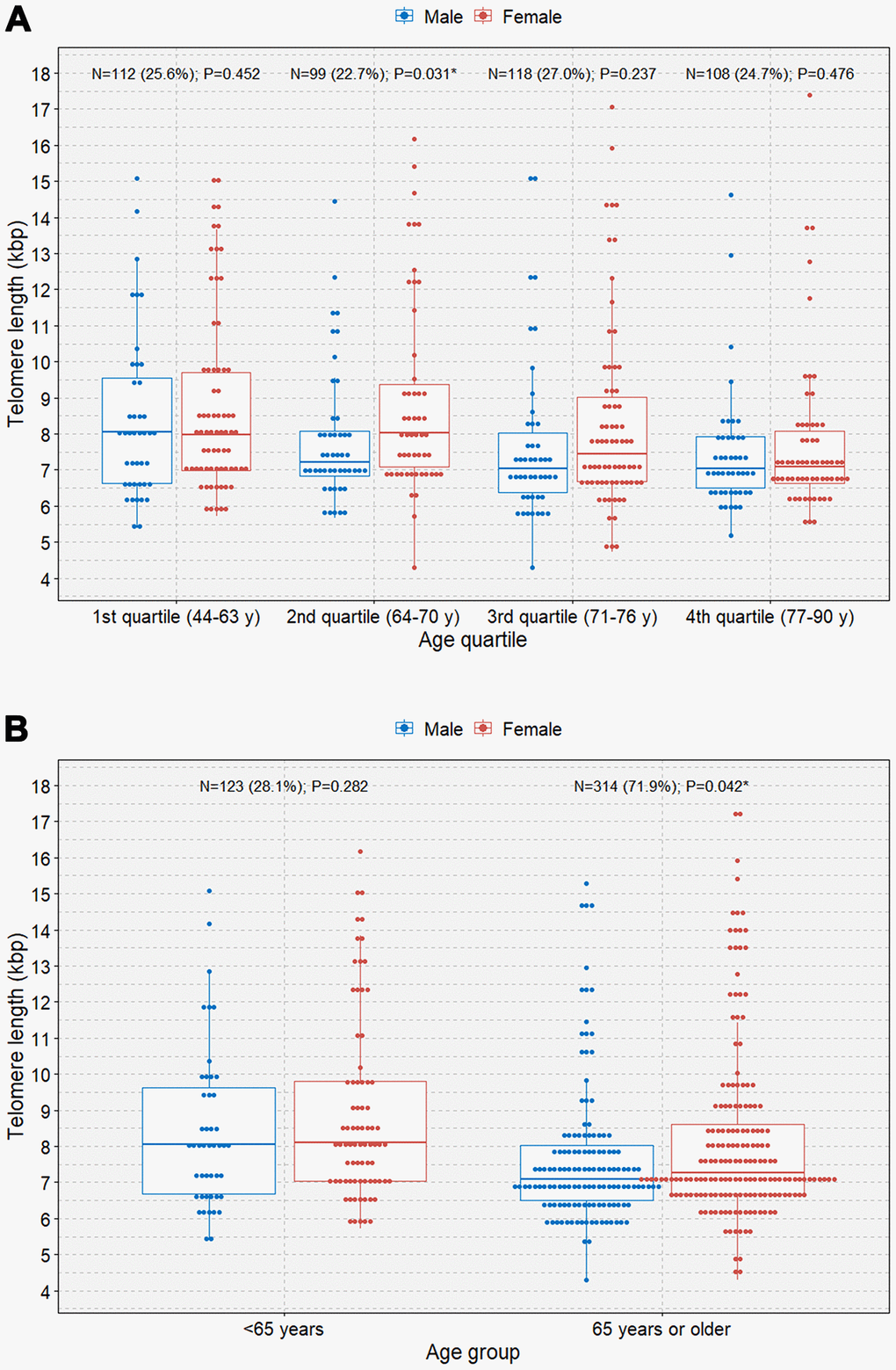 Table 3. Multivariable linear regression analysis of telomere lengths among healthy individuals and individuals with MCI and AD according to participant characteristics.

The results of this study demonstrated a mean telomere shortening of approximately 37 bp per 1-year increase in age in Korean individuals after adjusting for medical history. In multivariable analysis, only female participants demonstrated a significant negative association between age and TL. When the study participants were divided into healthy individuals, individuals with MCI, and individuals with AD, only those with AD showed a significant telomere shortening of 60 bp per year in the multivariable model.

In previous studies, the reported mean rates of telomere shortening ranged from 22 to 47 bp per year [1, 3–7]. Studies have reported inconsistent results regarding the degree and rate of telomere shortening with age. One strength of our study is its relatively large sample size. Moreover, to our knowledge, this study is the first study using multicenter data to report the overall association between age and TL in Koreans.

When we classified individuals by sex, the statistically significant negative correlation between age and TL disappeared in men after adjusting for medical history. Similarly, a previous study reported no significant correlation between age and TL in men [18]. The authors suspected that older individuals with poor health may have been less willing to participate in medical research due to their poor health [18]. In addition, men are less likely to participate in research compared to women in general [19]. These findings may explain the lack of relationship between age and TL in men. Our study also showed a higher rate of AD in female participants than in male participants (Table 1).

In conclusion, we estimated the mean rate of telomere shortening per year in Koreans. We identified a negative association between age and TL, which was more prominent in women than in men. We also found a greater rate of telomere shortening in individuals with AD than in those with MCI and healthy individuals. Further studies are needed to better understand the association between age and TL in AD.

A total of 437 individuals were enrolled from 11 hospitals. These hospitals included nine medical centers that comprised the validation cohort of the Korean Brain Aging Study for the Early Diagnosis and Prediction of AD and two independent centers (Asan Medical Center and Hanyang University Guri Hospital). Participants were diagnosed with MCI if they met the clinical criteria established by the National Institute on Aging-Alzheimer’s Association (NIA-AA) and the modified criteria proposed by Petersen—1) Clinical Dementia Rating (CDR) scale score of 0.5; 2) memory complaints compared to the participant’s previous cognitive function by patients, caregivers, or clinicians; 3) independent activities of daily living; 4) an objective cognitive decline of >1.5 standard deviations below the age-, education-, and sex-adjusted normative means for one or more of the four neuropsychological tests (memory, visuospatial, language, or frontal-executive function) included in the Consortium to Establish a Registry for Alzheimer’s Disease; and 5) absence of dementia. Patients were diagnosed with probable AD according to the criteria proposed by the National Institute of Neurological and Communicative Disorders and Stroke-Alzheimer’s Disease and Related Disorders Association or the NIA-AA; Diagnostic and Statistical Manual of Mental Disorders 4th edition; and CDR scale score of 0.5 or 1. The study individuals included 173 healthy controls, 123 individuals with MCI, and 75 individuals with AD. MCI and AD were diagnosed based on clinical examinations, including Mini Mental State Examination (MMSE), CDR scale, and amyloid-beta PET. Individuals who were diagnosed with other types of dementia, such as frontotemporal dementia, were excluded and classified in the not available group to avoid the risk of bias. The study was performed according to the International Conference on Harmonization Good Clinical Practice guidelines and was approved by the institutional review board of each participating center. Before participation, all participants provided written informed consent. Due to significant cognitive declines in some individuals with AD, informed consent was obtained from their legal guardians.

Individuals were determined to have hypertension if they were prescribed antihypertensive medication(s) or had systolic blood pressure >140 mmHg and diastolic blood pressure >90 mmHg. Diabetes mellitus was diagnosed based on the prescription of insulin or oral hypoglycemic medications, high plasma glucose levels (≥126 mg/dL), or high glycated hemoglobin level (≥6.5%) after 8 hours of fasting. Individuals were diagnosed with hyperlipidemia if they were prescribed lipid-lowering medications or had high levels of total cholesterol (≥200 mg/dL), low-density lipoprotein cholesterol (≥130 mg/dL), and triglycerides (≥150 mg/dL) and low levels of high-density lipoprotein cholesterol (<40 mg/dL). Heart disease was defined as a history of coronary artery bypass grafting, percutaneous coronary intervention, or atrial fibrillation or use of heart-related drugs. Stroke was defined as a medical history of cerebral infarction, intracerebral hemorrhage, or subarachnoid hemorrhage.

A total of 325 participants underwent amyloid-beta PET at baseline. The standardized uptake value ratio (SUVR) was calculated using 18F-flutemetamol PET and 11C-PiB PET, which were adjusted using the pons and the cerebellar gray matter as reference regions, respectively. The composite SUVR was calculated by obtaining the region of interest activity of the frontal, temporal, parietal, occipital, anterior cingulate, and posterior cingulate/precuneus cortices and dividing them by the mean intensity of the reference regions. Amyloid-beta PET positivity was determined based on the composite SUVR (≥0.634 for 18F-flutemetamol PET and >1.21 for 11C-PiB PET).

At baseline, whole blood from individuals was collected and separated into plasma and buffy coat. The leukocyte DNA was extracted from the buffy coat using D-DEX™ II b RBC lysis buffer and D-DEX™ II b Cell lysis buffer (Intron, MA, USA). The DNA was then hydrated with 300 μL of DNA hydration solution (QIAGEN, Hilden, Germany). TLs were measured using a nonradioactive TeloTAGGG TL Assay (Roche Boehringer-Mannheim, Grenzach-Wyhlen, Germany) according to the manufacturer’s instructions. Briefly, 2–4 μg of DNA was fragmented using a Hinf I/RsaI enzyme mix and separated using agarose gel electrophoresis. The DNA fragments were then transferred to a nylon membrane (Millipore, Bedford, MA, USA) and incubated with digoxigenin (a digoxigenin-labeled probe), which specifically attaches to telomeric repeats. Next, the membranes were incubated with secondary antibodies conjugated with alkaline phosphatase. TLs were visually measured using chemiluminescence and an image analyzer (ImageQuant LAS 4000, GE Healthcare, Little Chalfont, UK). TLs were determined by comparing them to molecular weight standards.

The chi-square test and Student’s t-test were used to identify differences between the two groups. Missing values were replaced with “99” and included in the statistical analysis [28]. Box plots with dot plots were used to assess the differences in TLs according to age groups and sex.

There are no conflicts of interest to be declared.