Copyright: © 2021 Zhou et al. This is an open access article distributed under the terms of the Creative Commons Attribution License (CC BY 3.0), which permits unrestricted use, distribution, and reproduction in any medium, provided the original author and source are credited.

Patients with heart failure are at increased risk for ischemic stroke. We aim to develop a more accurate stroke risk prediction tools identify high-risk patients with heart failure with reduced ejection fraction (HFrEF). Patient data were extracted retrospectively from the electronic medical database between January 2009 and February 2019. Univariate and multivariate Cox regression analysis were performed to identify independent predictors, which were utilized to construct a nomogram for predicting ischemic stroke. AUROC analysis was used to compare the prognostic value between the new risk score and CHADS2/CHA2DS2-VASc scores. In 6087 patients with HFrEF, the risk of first-ever ischemic stroke was 5.8% events/pts-years (n=468) during 8007.2 person-years follow-up. A nomogram constructed by integrating 6 variables, including age, atrial fibrillation (AF), deep vein thrombosis (DVT), d-dimer, anticoagulant use and spontaneous echocardiographic contrast (SEC)/left ventricular thrombus (LVT), exhibited a greater area under the curve of 0.727, 0.728 and 0.714 than that by CHADS2 score (0.515, 0.522 and 0.540), and by CHA2DS2-VASc score (0.547, 0.553 and 0.562) for predicting first-ever ischemic stroke at hospitalization, 30-day and 6-month follow-up (all p<0.001). This novel stroke risk score performed better than existing CHADS2/ CHA2DS2-VASc scores and showed improvement in predicting first-ever ischemic stroke in HFrEF patients.

Stroke risk stratification using readily available clinical variables could help identify “low-risk” and “high-risk” subgroups in HF population for more regular anticoagulant strategies for stroke prevention. [5] CHADS2 and CHA2DS2-VASc scores was a widely useful scoring system for stratifying ischemic stroke risks in patients with atrial fibrillation (AF). [6, 7] CHADS2 and CHA2DS2-VASc, as a cluster of multiple stroke risk factors, was also extensively used to predict stroke in patients with heart failure with reduced ejection fraction (HFrEF) but without AF. [8–10] A potential limitation of these approaches is selection bias, because clinical features associated with non-use of anticoagulation are likely to influence stroke risk. Prior-stroke history has been shown as the most powerful independent risk factor for improving stroke prediction. However, prognostic ability of established risk stratification scores benefited from prior-stoke history may confer low-prognostic efficiency in patients without stroke history. Additionally, all patients, who have had an ischemic stroke history are at high risk of future stroke regardless of presence of AF, and for whom anticoagulation is strongly indicated. Arguably, clinicians are particularly interested in risk stratifying patients without stroke history for ischemic stroke and how much stroke risk can be reduced in those undergoing anticoagulant management.

Therefore, this study aims to develop a nomogram to predict the probability of first-ever ischemic stroke in HFrEF, to evaluate the effectiveness of anticoagulant use in patients with HFrEF for stroke prevention, and to compare the prognostic value between the resulting scoring model and CHADS2/CHA2DS2-VASc scores.

Construction of the new scoring model

Table 3. Multivariate analysis for the construction of the novel stroke risk score. 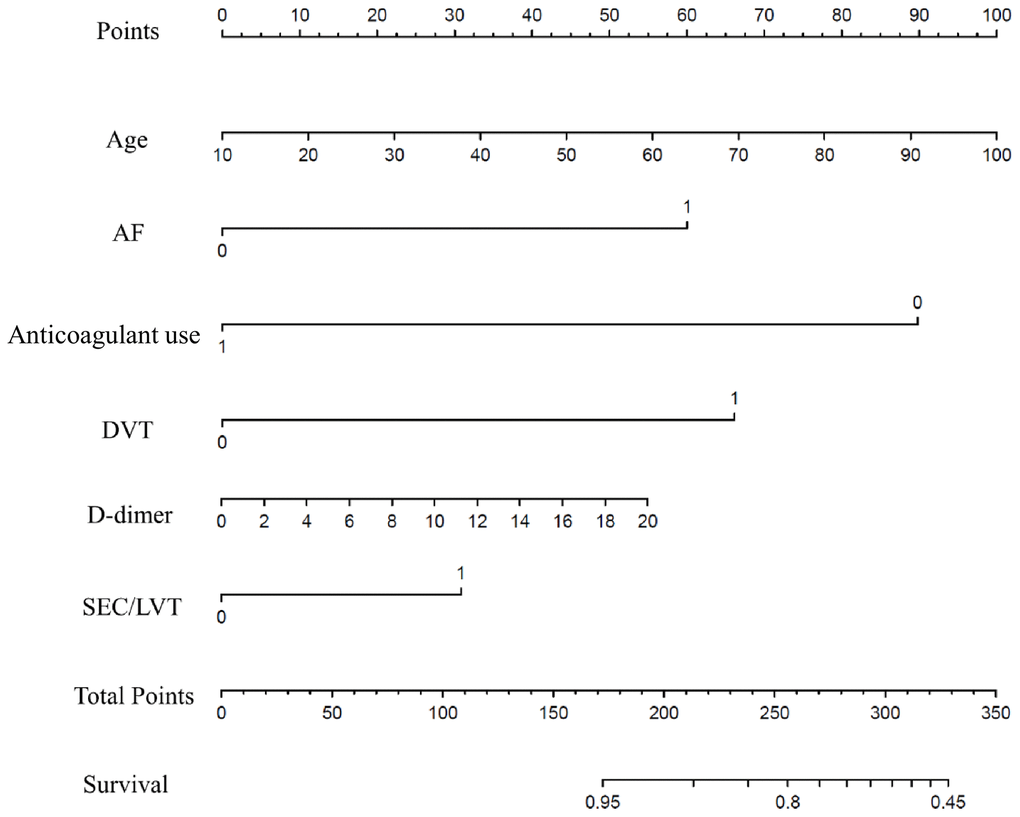 Figure 2. AUROC curves comparing prediction efficacy between our risk model and existing CHADS2 and CHA2DS2-VASc scores in hospital (A), 30-day (B) and 6-month (C) follow-up. 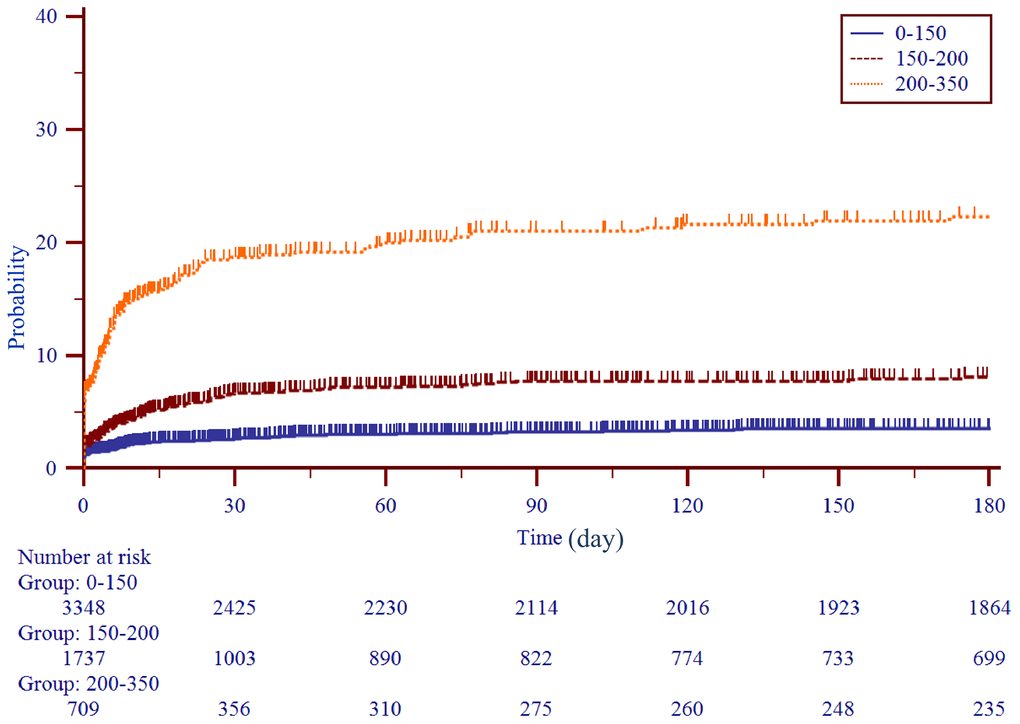 We developed a novel risk score for predicting first-ever stroke in a large cohort of HFrEF patients with or without anticoagulant use. The score included 2 continuous variables (age and d-dimer) and 4 categorical variables (AF, DVT, SEC/LVT and anticoagulant use). This scoring model predicted first-ever ischemic stroke with a significantly higher accuracy than the guideline-recommended CHADS2 and CHA2DS2-VASc risk model.

As is well-known, age independently influences stroke outcome and was presented in CHA2DS2-VASc scores as 1 score for age 65–74 and 2 scores for age ≥75 years. In contrast to CHADS2 and CHA2DS2-VASc scores, using continuous variable, the score of age in this novel score is dynamic with the opportunity to allow monitoring of the patient's annual changes in risk of future events. The correlation between DVT and ischemic stroke was also addressed by recent literatures. [11–13] Potential underlying mechanisms include prothrombotic tendency, inflammation activity or endothelial damage [11–14]. In this study, DVT was associated with over 3-fold increased risk and was added into the construction of our resulting scoring model. Three previously identified clinical risk factors (gender, hypertension and diabetes) from CHA2DS2-VASc risk were not included in the present evaluation, as they have not displayed independent associations with stroke in presence of other risk factors. Thus, these factors were excluded from the construction of the scoring model since they do not provide additional prognostic value in risk prediction for stroke and.

Patients with severe left ventricular dysfunction tend to have higher rates of SEC/LVT, which frequently was associated with higher ischemic stroke risk in patients with HFrEF. [15–18] Prognostic utility of LVT for stroke prediction also had been investigated among patients with dilated cardiomyopathy. [15] SEC is not infrequently observed with echocardiography in patients with HFrEF. Similar to LVT, SEC has also been recognized to exist in left ventricle with high incidence of thromboembolic events. [19–21] The presence of SEC/LVT may indicate fibrinogen concentration and a trigger mechanism for hypercoagulability [7, 15]. Moreover, d-dimer level also reflects increases in blood coagulation and degradation of fibrin, and thus, could be used as marker of thrombosis. [22, 23, 26] Additional studies have consistently shown that elevated d-dimer level is a determinant of the incidence of ischemic stroke not only in the general population but also in patients with HF. [23, 24].

Quantitative evaluation of antithrombotic agents for stroke risk in HFrEF

Due to lack of findings in randomized trials, anticoagulants have not been included in international treatment recommendations for HF patients without AF. [25–28] However, the WARCEF sub-study of HF patients in sinus rhythm reported that longer time in the therapeutic range among patients allocated to warfarin reduced the risk of the ischemic stroke and also improved net clinical benefit. [29] In our scoring model, quantitative evaluation can be conducted in the context of the potential benefit of anticoagulant use to determine optimal anticoagulant therapy. This can be mirrored by one paradigmatic example. A 70-year old (68 points) patient without stroke history, diagnosed as AF (60 points), DVT (70 points), SEC/LVT (30 points), with d-dimer>20 (58 points) and without anticoagulant use (0 points) would have a total nomogram score of 218 and a following probability of stroke >10%. Conversely, a patient underwent anticoagulant would arrive at a total nomogram score of 121 and a following probability of adverse outcome approximating <5%.

This study has several limitations. Firstly, this study was retrospective and observational contributing to potential withdraw bias due to lost to follow-up. Secondly, this scoring model was developed from a single-center data without external validation, thereby limiting generalizability our findings. Future external validation studies should be performed in other cohorts and in patients of other ethnicities. Finally, it also remains uncertain about the influence of different dosage and duration of anticoagulant therapy for stroke prediction. High quality prospective research is needed to address unanswered questions to optimize anticoagulant therapy.

In summary, we derived the scoring model for stratifying the risk of first-ever ischemic stroke in patients with HFrEF. This novel score showed an improvement of discriminative accuracy when compared to existing scores. 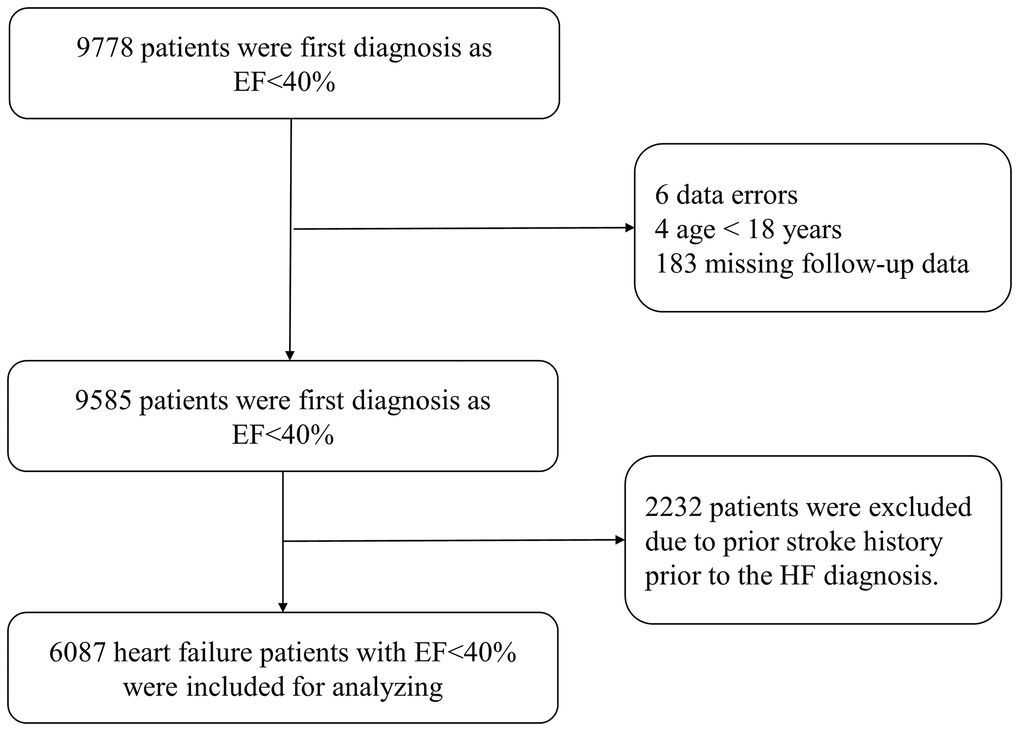 The primary end point was defined as ischemic stroke at hospitalization, 30-day, 6-month and subsequently the remain period of follow-up. The nomogram was established based on outcomes at 30-day. Ischemic stroke diagnosed as clinically relevant focal neurological symptoms detected by computed tomography or magnetic resonance imaging and confirmed by a neurologist. Ischemic cardiomyopathy (ICM) was defined as CHF in the presence of cardiomyopathy associated with a documented history of myocardial infarction, coronary revascularization, or obstructive coronary artery disease (>50% stenosis) [30]. Chronic kidney disease (CKD) was defined as estimated glomerular filtration rate (eGFR) less than 60 mL/min/1.73m2. [31] LVEF was determined using the biplane Simpson’s method in the apical 2-chamber view. HFrEF was defined as EF with LVEF<40%. [32] Spontaneous echocardiographic contrast (SEC) was defined by dynamic smoke-like echoes with characteristic swirling motion distinct from white noise artifact. [33] LVT was diagnosed as an echogenic mass adjacent to but distinguishable from left ventricular endocardium in an area of wall-motion abnormality. Anticoagulants were used according to patients’ indications and contraindications from the current guidelines and in combination with the patients’ intentions. For high-risk patients, the use of anticoagulants would be taken under guidance of specialist physician. Some patients with atrial fibrillation (AF) or LVT were not on use of regular anticoagulant, the reasons were determined as high risk of bleeding, irregular medication, and refuse anticoagulation. Anticoagulants included warfarin and the novel oral anticoagulants (NOAC) such as dabigatran and rivaroxaban, which was available in Chinese markets.

Baseline characteristics were described using mean±SD for continuous variables and frequency (%) for categorical variables. Student’s t and chi-square tests were performed to determine significant differences between groups accordingly. Non-normally distributed variables were presented as median (quartile range) and were compared using the Mann Whitney U test. The associations of clinical meaningful variables were enrolled into the univariate Cox regression models. Then the variables, which were found to be significantly associated with stroke, were entered as potential independent variables in multivariate Cox regression models. Based on the regression coefficients obtained in the multivariable regression model, the survival nomogram was generated to obtain survival probability estimations. The predictive performance of the nomogram was assessed by the area under the receiver operating curve (AUROC) and Kaplan-Meier survival analyses. A two-side p<0.05 was considered as statistically significant. All analyses were performed with SPSS software (SPSS version 23.0 for Windows), MedCale software (MedCale version 11.4 for Windows) and R software (R 3.3.1 version Development Core Team).