The ARID family is a superfamily of 15 members containing a domain that interacts with AT-rich DNA elements. However, the expression and prognostic roles of each ARID in breast cancer are still elusive.

Breast cancer is one of the most common malignant tumors among women in the world, and the incidence of breast cancer in 2018 accounted for 24.2% of female cancers [1]. Due to early discovery and multiple treatment modalities, incidence and mortality rates are declining. However, tumor recurrence and distant metastasis are still the chief problems contributing to high mortality [2]. Although some genes have been used for treatment in breast cancer, the clinical efficacy is limited [3]. Thus, novel potential target genes used to predict or treat breast cancer are waiting for discovery.

In this study, we assessed ARID mRNA expression in breast cancer tissues and normal tissues by The Cancer Genome Atlas (TCGA datasets, and the prognostic role of each member of ARID mRNA expression in human breast cancer patients by Kaplan-Meier plotter (KM plotter) database. This is the first time to integrate all the members and analyze them. We found many important and meaningful biomarkers that had no reports on breast cancer. The studies provided a good orientation for the following research.

We analyzed both the tumor tissues and normal breast tissues using the TCGA database. The mRNA expression of ARID3A, ARID3B, ARID4B, JARID1B, JARID1C, JARID2 in tumor tissues was more expressive in normal tissues, ARID1B, ARID3C, ARID4A, ARID5A, ARID5B, JARID1A mRNA expression in tumor tissues were lower than that in the normal tissues (p<0.05) (Figure 1A). However, the ARID1A and ARID2 showed these results were not statistically significant. Then, we analyzed and obtained an overall view of the expression of ARID members across different molecular subtypes. The expression of ARID1A, ARID1B, ARID2, ARID3A, ARID4A, and ARID4B in no-luminal subtypes was lower than luminal subtypes, however, ARID3C, ARID5A, and JARID2 mRNA expression were higher in no-luminal subtypes of breast cancer tissues (Figure 1B–1J). The other five genes were not statistically significant (Supplementary Figure 1).

Figure 1. Distinct expression of ARID members in breast cancer patients. (A) The mRNA expression of all the ARID members was assessed in cancer and normal tissues (p values were calculated grouping by Tumor(T)/Normal(N) and using t-test. (B–J) The mRNA expression of ARID1A, ARID1B, ARID2, ARID3A, ARID3C ARID4A, ARID4B, ARID5A, and JARID2 were assessed in different molecular subtypes(p values were calculated grouping by luminal A + luminal B VS. HER2-riched + basal-like and using t-test). (*p < 0.05, **p < 0.01,***p < 0.001).

Prognostic significance of ARID members in all breast cancer patients

We respectively assessed the prognostic significances of the mRNA expression of 14 ARID family members (excluding ARID3C, no available matrix data) in human breast cancer patients at https://kmplot.com. Among them, 9 members were correlated with prognosis for all breast cancer patients (Figure 2A). The survival curves were displayed in Figure 2B–2H. High mRNA expression of ARID4B and JARID1B was interrelated with poor survival (Figure 2I, 2J, p=0.013 and p=0.0045). Low mRNA expression of ARID1A, ARID2, ARID3B, ARID4A, ARID5A, ARID5B, JARID1A were obviously associated with poor OS (Figure 2B–2H, p=0.0047, 0.00011, 0.00028, 1.60E-06, 0.0001, 2E−08 and 0.0027 respectively). The mRNA expression quantity of other ARID family members was not associated with OS (Supplementary Figure 2). 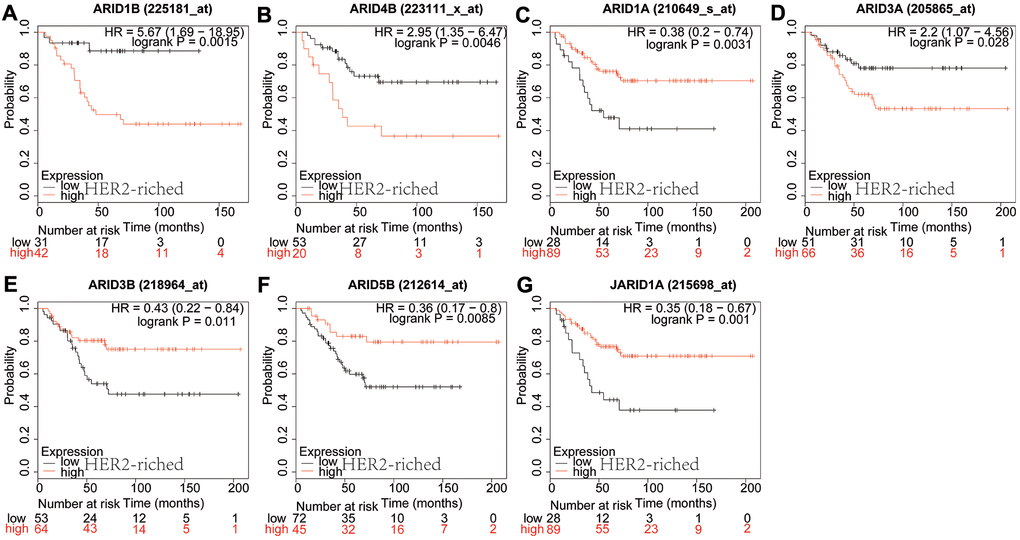 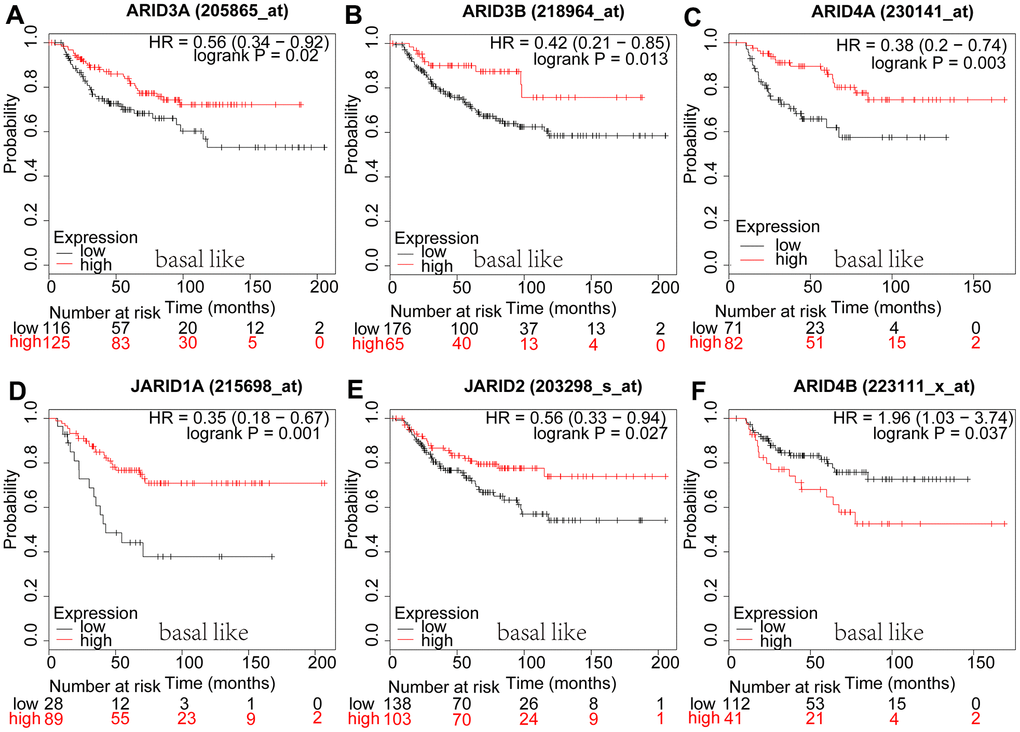 Further to verify the reliability of the above analysis, we chose ARID1A and performed protein level detection and analysis. Immunohistochemical staining (IHC) was used to detect the expression of ARID1A protein in 119 human breast cancer tissues and 32 normal adjacent tissues. A representative image of ARID1A IHC staining is shown in Figure 7A. Compared with normal adjacent tissues, the protein level of ARID1A in cancer tissues was obviously reduced (Figure 7B, p<0.01).

Figure 7. ARID1A protein expression is low and related to poor survival in breast cancer patients. (A) Representative IHC staining of ARID1A in (a) normal tissues (n = 32) and (b) tumor tissues (n = 119) (200×). (B) The expression of ARID1A protein in tumor tissues was significantly lower than that in adjacent normal breast tissues (p<0.001). (C) Low ARID1A expression is associated with poor survival in breast cancer patients, based on a Kaplan–Meier analysis of OS (n=119, log-rank test, p=0.035).

Some studies revealed frequent inactivating mutations in ARID2 in unstable colorectal cancer and non-small cell lung carcinoma [19], Loss of ARID2 expression also existed during the progression of gastric cancer and hepatocellular [20], ARID2 took part in the important pathway genes in pancreatic cancer too [21]. All the researches showed consistently ARID2 the function of a tumor suppressor. For all I know, so far there are no reports about the association between ARID2 and breast cancer. Our research demonstrated low ARID2 expression was frequent in no-luminal breast cancer type and forecasted poor survival in all breast cancer patients and ER+ breast cancer patients by K-M plotter analysis. ARID3A protein was mainly expressed in B-lymphocytes [22]. Date analysis showed ARID3A might take part in the breast cancer regulatory networks, no other deeper research [23]. Based on our results, high mRNA expression of ARID3A was interrelated to poor prognosis in HER2-riched type breast cancer, but a better prognosis in basal-like type breast cancer.

Concerning ARID3C and ARID5A, there were no studies carried on the relationship between them and cancers as yet. In our study, expression of ARID3C and ARID5A were lower in tumor tissues than in normal tissues. K-M plotter analysis showed that low mRNA expression of ARID5A was obviously related with poor OS in luminal type and all breast cancer patients. In past studies, ARID5A was involved in the inflammatory process [24]. ARID5A plays a vital part in location of cells by translocation from nucleus to cytoplasm under diverse physiological conditions. ARID5A in Cytoplasm elevated the half-time of mRNA, whereas ARID5A in nuclear interacted with TFs, controlled cell proliferation and differentiation [24]. Combining our results, we speculated ARID5A would be a good candidate gene as a tumor suppressor in breast cancer. Like ARID5A, mRNA expression of ARID5B was interrelated with better survival in our study, which indicated the function of a tumor suppressor. However, other another study reported that ARID5B mainly give play to the role of an oncogene in T-cell leukemogenesis by activating the oncogenic transcriptional program [25]. Maybe the results indicated mRNA and protein level expression of ARID5B are functionally demarcative in breast cancer. The role of ARID3B in cancers was controversial. ARID3B, as a target of miR-125a, accelerates the migration of breast cancer and invasion of ovarian cancer, which inclines to play as an oncogene [26]. Furthermore, nuclear expression of ARID3B was positively related to ER status and negatively correlated with ERBB2 status, tumor grade and mitotic index in the breast cancer patients [27]. Nevertheless, a study showed ARID3B and Mycn cooperated in the proliferation and death of mouse stem cells, a ARID3B increased the survival time of cells and Mycn drove the progression of cell cycle [28].

Several studies have revealed that JARID1A and JARID1B give play to the diverse function of oncogenes and tumor suppressors resting with the type of tumor cells. Both JARID1A and JARID1B activated by H3K4 demethylation may play the function of tumor inhibition by enhancing cellular senescence in lung cancer [9]. JARID1B in MCF-7 and MDA-MB-231 of breast cancer cells inhibited cell angiogenesis and invasion by suppressing CCL14 expression [29]. By comparison, several studies indicated that JARID1A and JARID1B were related to tumor progression instead of in inhibition. The depletion of JARID1A suppresses migration, invasion, proliferation, and metastasis of lung cancer, which suggests JARID1A’s oncogenic roles in lung cancer progression [30]. A study reported JARID1B is extensively expressed in estrogen receptor positive breast cancer cell lines and tissues, and interaction with ERα. JARID1B’s low expression in MCF-7 cells brought about an obvious decrease in E2 activated tumor growth in nude mouse. The result demonstrated JARID1B exerted a precise oncogenic role in estrogen-induced growth of ER+ breast cancer [31]. In our study, mRNA expression of JARID1A was lower in breast cancer tissues, and its down-regulated mRNA expression was obviously related to worse OS in all breast cancer patients, notably in luminal A type, HER2-riched and basal-like type breast cancer patients, which acted the function of tumor suppression. While, mRNA expression of JARID1B, which was the higher expression in breast tumor tissues and appeared as an oncogene, was distinctly relevant to worse OS in all breast cancer patients, especially in ER/PR+ breast cancer patients.

We found many important and meaningful ARID family biomarkers, and many members had no reports on breast cancer. Our research affords new insights in regard to the function of ARID members to breast tumor progression, which may be helpful for the further discovery of medicine targeting ARID for breast tumor treatment.

Normalized gene expression data for 1095 primary breast cancers and 113 normal breast tissues, assayed by RNA-sequencing, was gained from the TCGA data analysis website (http://www.cbioportal.org/index.do). The intergroup difference was evaluated using a t-test. The relevance of mRNA expression of ARID family members to OS was assessed on an network database (https://kmplot.com), which was constituted from Gene Expression Omnibus(GEO) [32]. Survival curves of ARID1A protein expression were plotted using the Kaplan–Meier method, the effect of different variables on overall survival was evaluated using the Cox regression analyses. p-value<0.05 was considered to be statistically significant.(*p<0.05, **p<0.01, ***p<0.001).

The expression of ARID1A protein was performed by Immunohistochemistry staining(IHC). Each tissue section was incubated with ARID1A mouse polyclonal antibody solution (SC-32761, Santa Cruz, CA, USA; 1:200 dilution). The staining scoring was calculated by intensity*percentage of positive cells. The IHC staining intensity was graded as 0(no staining), 1 (weak staining), 2 (moderate staining), and 3 (strong staining). The positive staining tumor cells proportion in a field was calculated as 0 (<5%), 1 (5–20%), 2 (20–50%), 3 (50–75%), and 4(> 75%).