Copyright: © 2021 Umeda-Kameyama et al. This is an open access article distributed under the terms of the Creative Commons Attribution License (CC BY 3.0), which permits unrestricted use, distribution, and reproduction in any medium, provided the original author and source are credited.

Despite the increasing incidence and high morbidity associated with dementia, a simple, non-invasive, and inexpensive method of screening for dementia is yet to be discovered. This study aimed to examine whether artificial intelligence (AI) could distinguish between the faces of people with cognitive impairment and those without dementia.121 patients with cognitive impairment and 117 cognitively sound participants were recruited for the study. 5 deep learning models with 2 optimizers were tested. The binary differentiation of dementia / non-dementia facial image was expressed as a “Face AI score”. Xception with Adam was the model that showed the best performance. Overall sensitivity, specificity, and accuracy by the Xception AI system and AUC of the ROC curve were 87.31%, 94.57%, 92.56%, and 0.9717, respectively. Close and significant correlations were found between Face AI score and MMSE (r = −0.599, p < 0.0001). Significant correlation between Face AI score and chronological age was also found (r = 0.321, p < 0.0001). However, MMSE score showed significantly stronger correlation with Face AI score than chronological age (p < 0.0001). The study showed that deep learning programs such as Xception have the ability to differentiate the faces of patients with mild dementia from that of patients without dementia, paving the way for future studies into the development of a facial biomarker for dementia.

Dementia is one of the most serious problems facing a global aging population. Diagnosis of dementia is important for early intervention of the disease. However, many diagnostic methods are invasive or are time-consuming. For example, psychological assessment takes time, examination of cerebrospinal fluid is invasive and amyloid positron emission tomography is costly. Thus, there is demand for a simple, noninvasive, and inexpensive method for screening for dementia.

The perceived age of older adults was shown to be a robust biomarker of aging that is predictive of survival, telomere length [1], DNA methylation [2], carotid atherosclerosis [3], and bone status [4]. It was demonstrated that perceived age reflects cognitive function more closely than chronological age [5]. Furthermore, in the authors’ experience, advanced Alzheimer’s disease (AD) patients display a specific complexion. Thus, it was postulated that cognitive decline may be expressed in a patient’s face.

Deep learning, a major branch of machine learning in artificial intelligence (AI), has remarkably improved the performance and detection capabilities of AI programs since convolutional neural network (CNN) was first developed [6]. The authors have previously reported how CNN could be used to discern AD and dementia with Lewy bodies (DLB) perfusion single photon emission tomography (SPECT) images. The differentiation was made using cingulate island sign [7]. Based on this information, it was hypothesized that AI software may be able to classify patients as having cognitive impairment or not using facial recognition.

The present study aimed to examine whether AI can distinguish facial traits of cognitive impairment patients from that of non-dementia patients. The findings of this study lay the foundations for the development of a non-invasive, inexpensive and rapid screening tool for cognitive impairment using AI.

Table 1 summarizes the demographics of participants.

From these results, Xception with Adam applied as an optimizer was chosen for use in this study. 28 epochs was chosen as this was where the bottom of loss was seen in the model.

Evaluation of the AI model 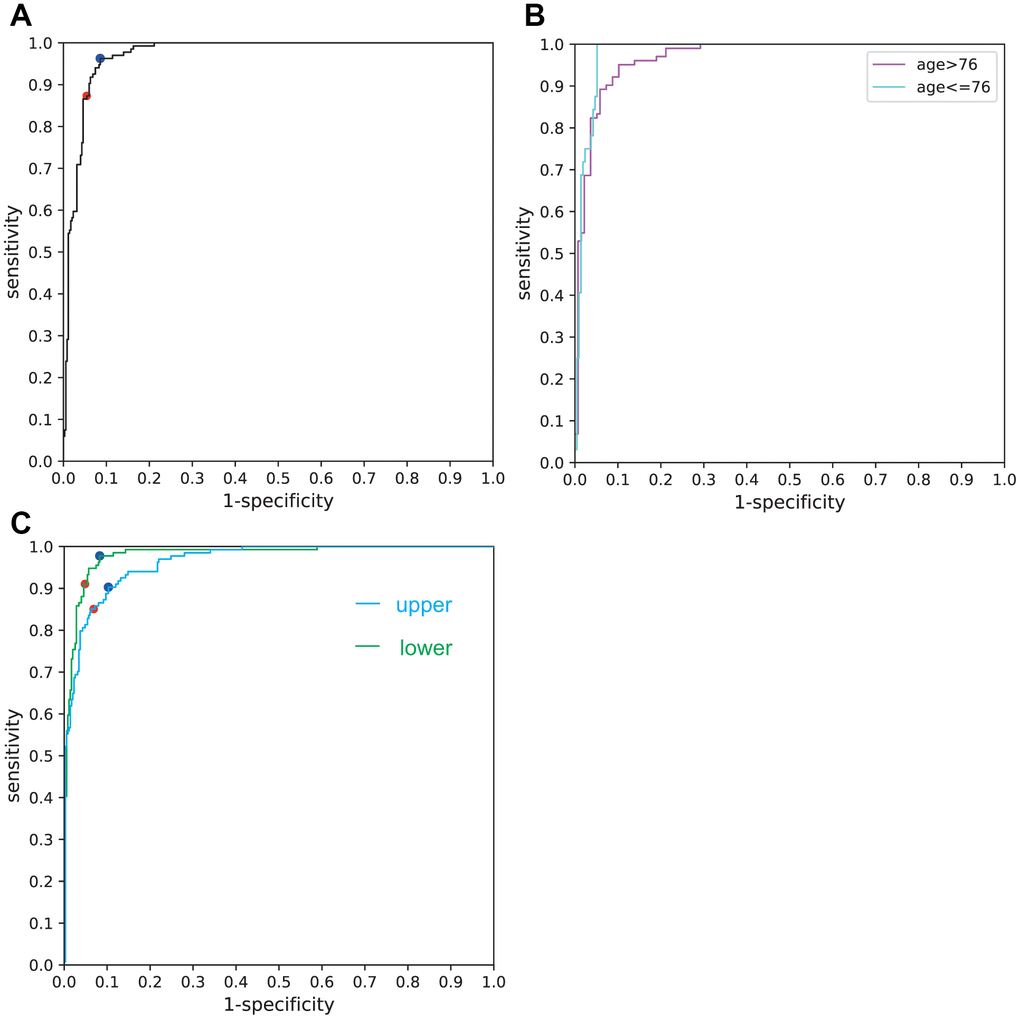 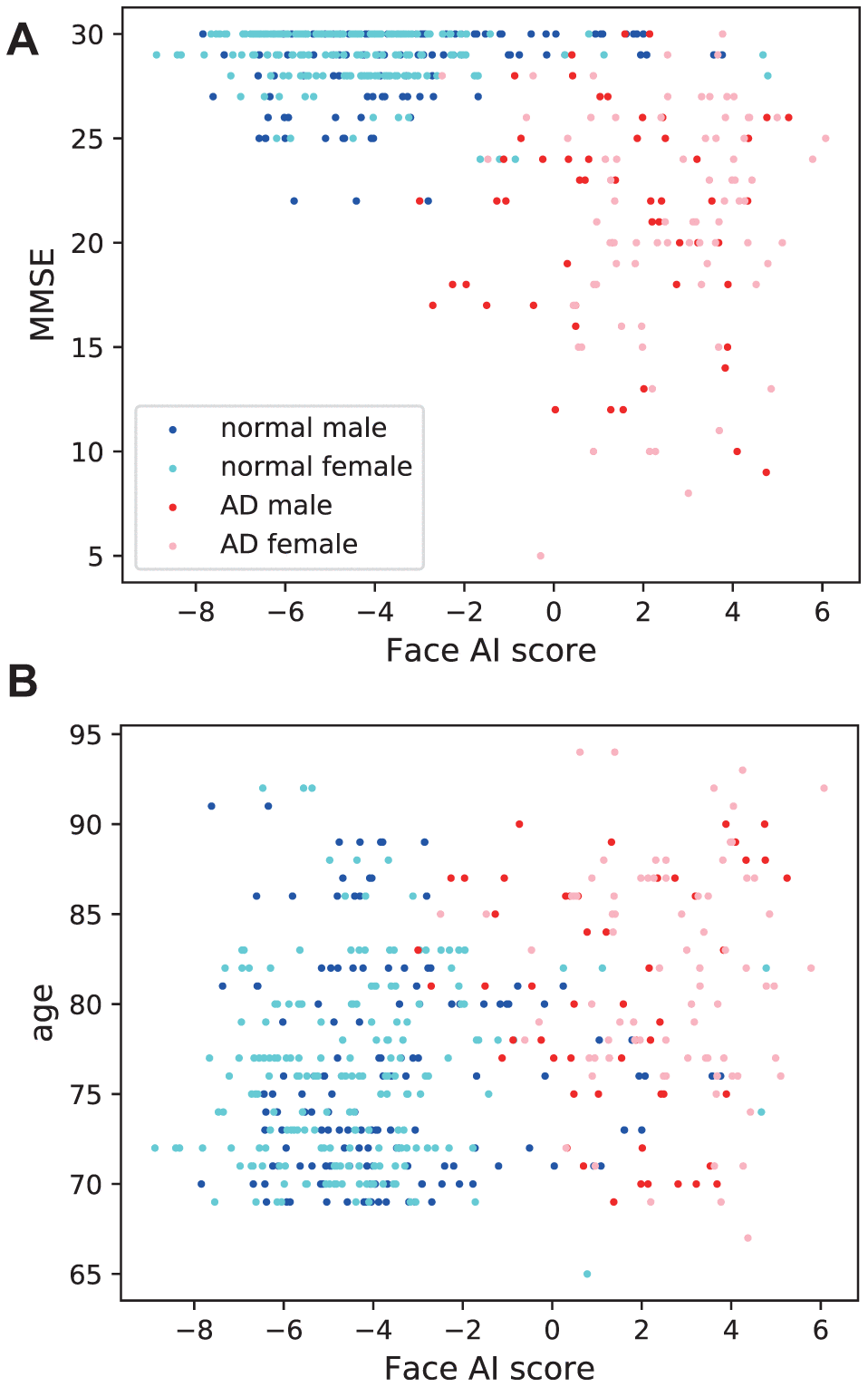 Analysis of upper and lower half faces

44 epochs was chosen for upper half and 41 epochs for lower half, as these were where the bottom of loss was seen in the model.

The deep learning network implemented in this study successfully discerned faces of participants with cognitive impairment from those without dementia. With an accuracy of 92.56% and AUC of ROC being 0.9717, this method is reliable enough for implementation as an initial screening test for dementia. The relatively low sensitivity (87.31%), which may be attributable to the fewer number of dementia participant facial images, could be improved to 96.27% by employing ROC analysis. Face AI score correlated significantly more strongly with MMSE than with age. The weaker correlation between Face AI score and age (r = 0.321) would imply that the significant difference between age of dementia participants with and without dementia is unlikely to have affected the AI system. If the AI system relied on participants age, limiting the age range would worsen the results. However, limiting the age did not impair the accuracy (Figure 2B).

The AI system is too complicated and has so-called “black box” nature. Although both upper and lower half faces showed excellent performance, lower half showed slightly better performance than upper half contrary to our expectation (Figure 2C). The system may get more information from mouths or wrinkles than eyes or hair.

The correlation coefficient between Face AI score and MMSE was significantly higher in females than in males. A previous study by the authors demonstrated a significantly stronger correlation between MMSE and perceived age than with chronological age but only in female participants [5], which may be attributable to the tendency for cognitively healthy older women to pay more attention to their appearances relative to their cognitively impaired counterparts, resulting in a marked difference in perceived age.

The fact that SENet50, ResNet50, and simple CNN models were unable to reduce loss during discriminating facial images of dementia and non-dementia participants suggests that the task is more difficult for AI software than discerning differences in SPECT images [7]. This is understandable given that while SPECT images can be classified by trained nuclear medicine physicians, diagnosis of dementia from facial images alone cannot be done manually. Suitable deep learning networks such as Xception are required to accomplish the complex task of detection of dementia through facial images.

This study has several limitations. Firstly, the study comprised only 484 images as it was performed at a single institution with a single cohort. Moreover, this study may be affected by institutional biases. Although pretraining assisted AI system learning with limited images, further studies employing a larger number of images from multicenter will be needed to confirm the results. Secondly, the non-dementia participants of this study may have had undetected dementia that did not require nursing care. Similarly, though the majority of dementia participants were assumed to have Alzheimer's disease, this was not confirmed using pathology or amyloid positron emission tomography, and one participant from Kashiwa cohort did not underwent sufficient tests. Thus, some participants may have been suffering other forms of dementia such as DLB, vascular dementia or normal pressure hydrocephalus. The facial differentiation of DLB and AD patients may be an interesting study in the future. Finally, the facial images included in this study were only front facing images of Japanese participants with neutral expressions. The ability to use images from various angles, of people from varied ethnicities and with a variety of facial expressions would improve the robustness of the AI system.

Dementia patients were recruited mainly from the Department of Geriatric Medicine, The University of Tokyo Hospital. Many of them also participated in a previous perceived age study [5]. The majority of participants without dementia were recruited from the Kashiwa cohort organized by the Institute of Gerontology, The University of Tokyo. Patients from the Department of Geriatric Medicine who were diagnosed as cognitively normal after several tests were included in the non-dementia arm of the study. Participants from the Kashiwa cohort who showed declining MMSE over the past few years were classified into the cognitive impairment arm of the study. The non-AD patients were excluded from the analyses. The rest of the participants were diagnosed to be Alzheimer’s disease based on DSM-IV criteria and their Hachinski ischemic scale [10] were no more than 4.

Front-on portrait images were taken of participants wearing a neutral expression. The images were cropped to a square with the face in the middle of the image. Backgrounds were removed so that the AI does not use the background to differentiate cognitive impairment patients from non-dementia patients.

Images of cognitive impairment and healthy participants were divided into 10 groups (group0 ... group9). All images taken of the same participant were included in the same group.

5 models with 2 optimizers were tested with group-base 10-fold cross validation. Learning curves were depicted for 200 epochs. The best model was chosen and the optimum number of epochs determined by considering the accuracy / loss and stability of each model.

The diagnostic and predictive accuracy of the best CNN model was calculated using the group-base 10-fold cross validation. The binary differentiation of cognitive impairment / non-dementia facial images were expressed as “Face AI score”. The scores were obtained by applying an inverse sigmoid function to the output predictive value. Face AI score was evaluated using the ROC curve analysis and AUC on the image-base. Correlations between Face AI score and MMSE / chronological age were assessed. Difference by sex was also examined.

All statistical analyses were performed with python and scipy.stat library.

Analysis of upper and lower half faces

The authors declare that they have no conflicts of interest. The Kashiwa study was also supported by Sunstar Co., Ltd.

This study was supported in part by Research and Development Grants for Dementia Grant number 16dk0207027h0001, 18dk0207027h0003 and 19dk0207027h0004, provided by Japan Agency for Medical Research and Development (AMED) to M.A. and Grants-in-Aid for Scientific Research (Kakenhi), Grant number 20K07778, provided by Japan Society for the Promotion of Science to Y.U-K, Grant Number 18H05297, to K.I. The Kashiwa study was also supported by Sunstar Co., Ltd., however, Sunstar has no role in this study.