Copyright: © 2021 Cao et al. This is an open access article distributed under the terms of the Creative Commons Attribution License (CC BY 3.0), which permits unrestricted use, distribution, and reproduction in any medium, provided the original author and source are credited.

Cholangiocarcinoma is an extremely malignant tumor arising from cholangiocytes and epithelial cells lining the intra- and extra-hepatic biliary ducts [1]. Due to lack of sensitive indicators, cholangiocarcinoma patients are often diagnosed with late-stage disease and show a median overall survival of less than 12 months [2]. Despite advancements in surgical techniques and radiochemotherapy, the 5-year survival rate of cholangiocarcinoma patients is still approximately 20-40% [3]. Therefore, it is urgently necessary to decipher the molecular mechanisms underlying cholangio carcinoma progression to discover new biomarkers for diagnosis and treatment.

MicroRNAs (miRNAs) are short (about 22 nucleotides in length) non-coding RNAs that bind complementary sequences on target RNA transcripts and repress their expression by decreasing their stability or limiting their translation into protein [4]. Recent studies have demonstrated that miRNAs play pivotal roles in a variety of human diseases, including cancer [5]. Abnormally expressed miRNAs have been broadly implicated in cholangiocarcinoma pathogenesis [6–10]. miR-29b has been reported to be decreased in various cancers, where it functions as a tumor suppressor by inhibiting tumor cell proliferation and invasion, angiogenesis, and chemoresistance [11–13]. However, the involvement of miR-29b in cholangiocarcinoma development in not fully understood. 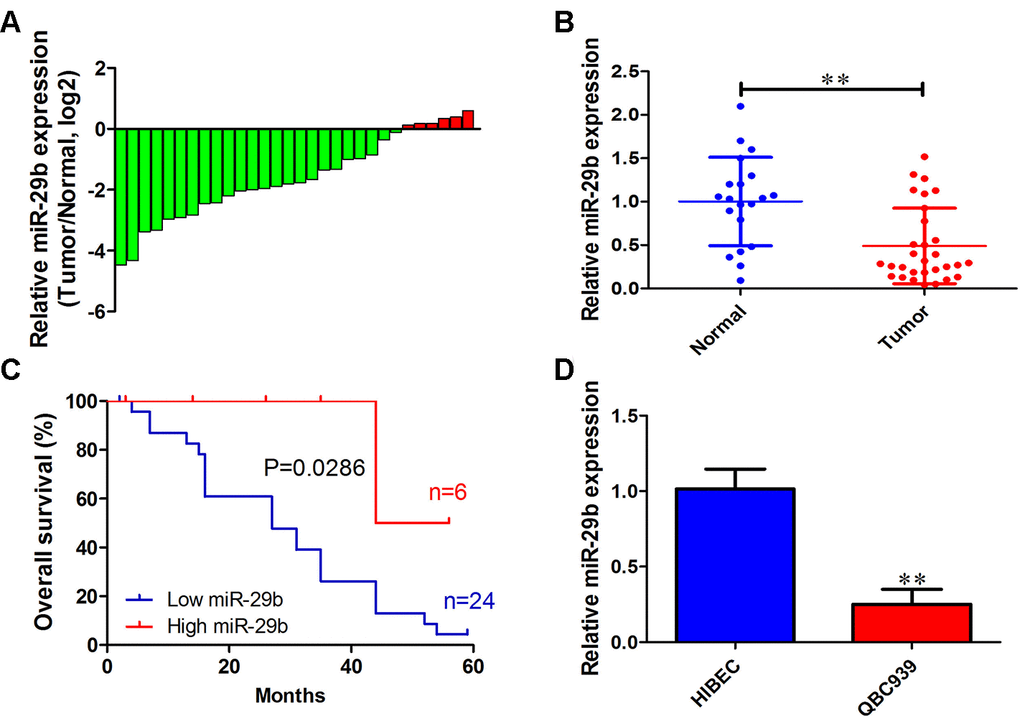 To evaluate the effect of miR-29b on the proliferation of cholangiocarcinoma cells, a lentiviral vector overexpressing miR-29b (LV-miR-29b) or its corresponding negative control (LV-miR-NC) were alternatively transfected into QBC939 cells. After qRT-PCR validation (Figure 2A), we conducted MTT assays which showed decreased proliferation in miR-29b-overexpressing cells (Figure 2B). Moreover, a similar effect was observed in colony forming assays (Figure 2C and 2D). We also assessed the influence of miR-29b on both cell cycle distribution and apoptosis using flow cytometry. The results demonstrated that miR-29b overexpression led to significant accumulation of cells in G1 phase (Figure 2E and 2F) and a marked increase in the apoptotic rate (Figure 2G and 2H), compared with LV-miR-NC-transfected cells. These data suggest that miR-29b inhibits cholangiocarcinoma cell proliferation through induction of G1 phase cycle arrest and apoptosis. 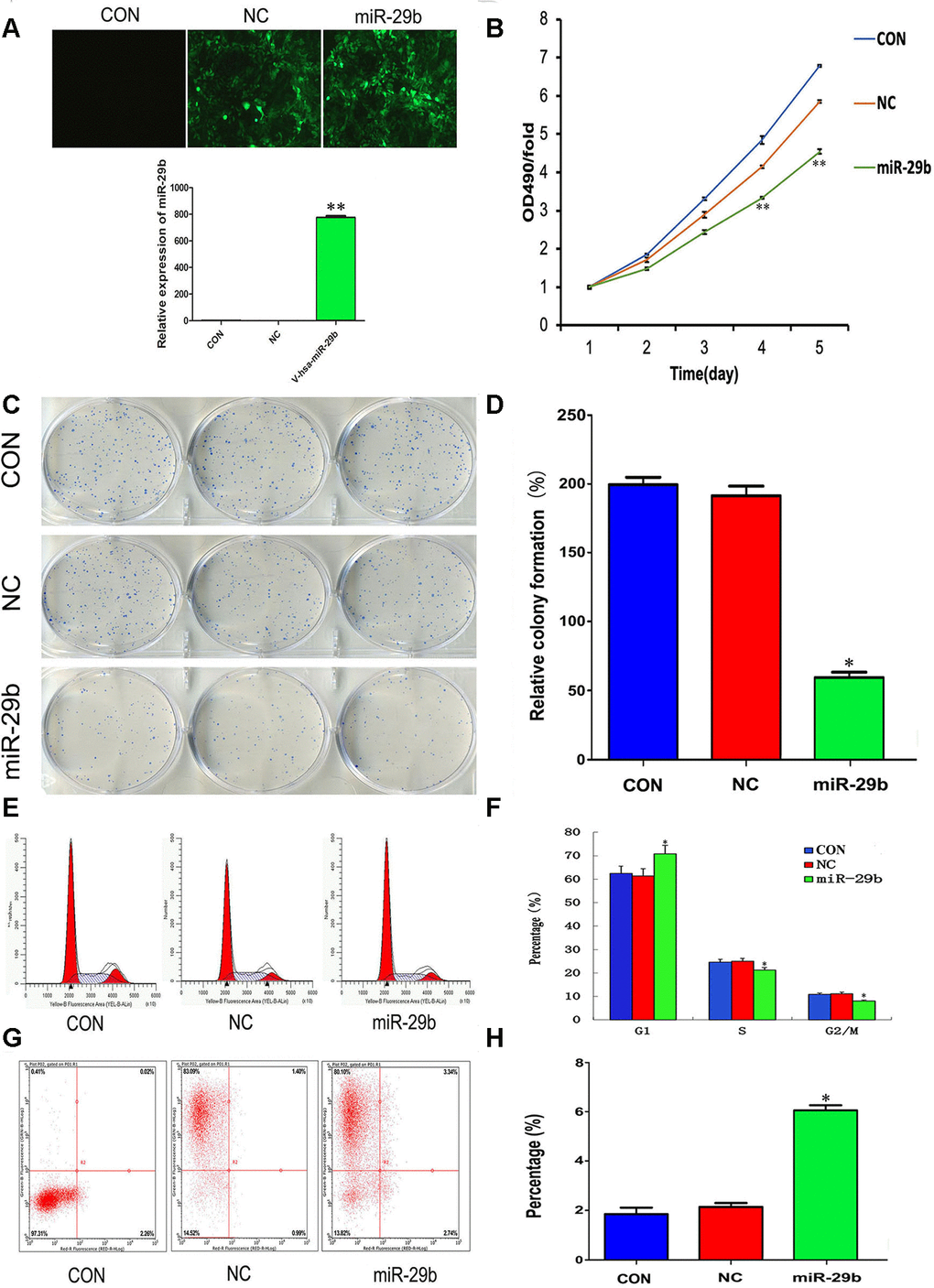 Cyclin-dependent kinase inhibitor 2B (CDKN2B, also known as p15), is a well-known tumor suppressor that is deregulated in various tumors [14–16]. To test whether CDKN2B expression mediates the inhibitory effect of miR-29b overexpression on the proliferation of QBC939 cells, qRT-PCR and western blots were performed to determine CDKN2B levels. The results showed that miR-29b overexpression significantly increased CDKN2B expression at both the mRNA and protein levels (Figure 3A and 3B). To assess whether this effect involved changes in the methylation status of the CDKN2B gene promoter, we conducted methylation-specific PCR (MSP) assays. Consistent with the observed increase in CDKN2B expression, MSP results revealed that CDKN2B promoter methylation levels were reduced after transfection with LV-miR-29b (Figure 3C). These findings suggest that miR-29b inhibits the proliferation of cholangiocarcinoma cells by upregulating CDKN2B expression through demethylation of its promoter. 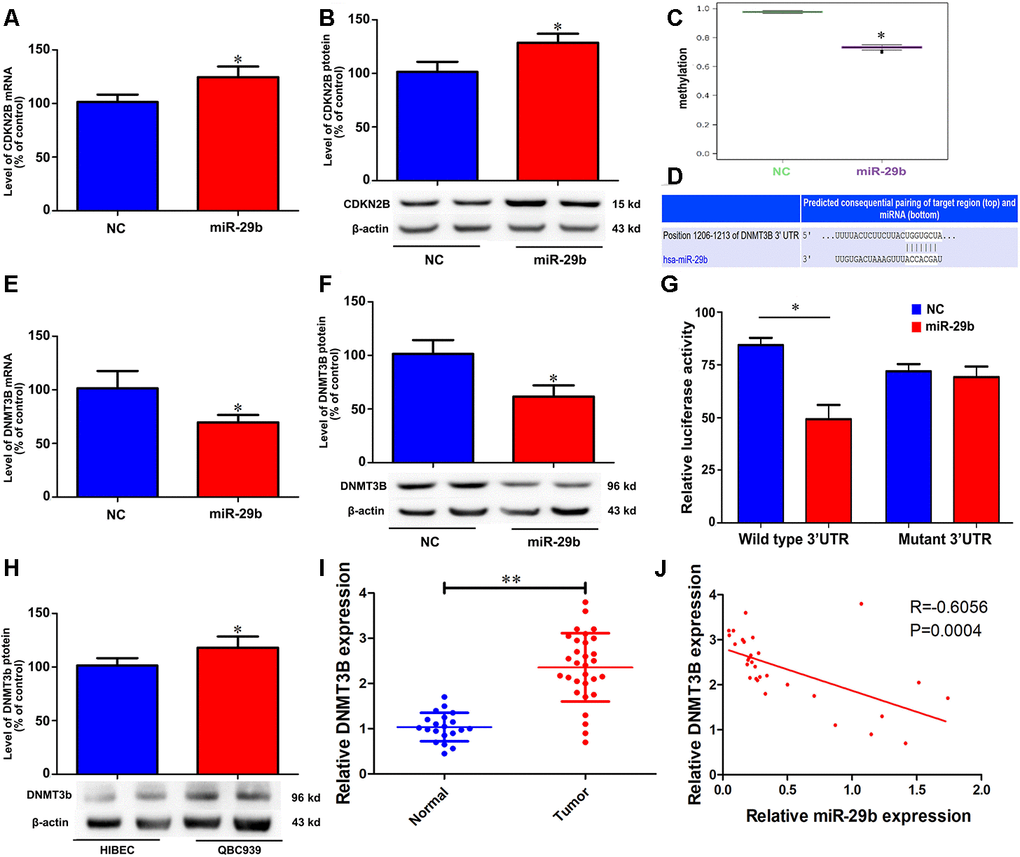 To uncover the mechanism through which miR-29b reduces the methylation imprint of the CDKN2B gene promoter, we performed bioinformatics analysis to identify DNA methyltransferases targeted by miR-29b. Results showed that the 3’UTR of DNA methyltransferase 3B (DNMT3B) contained a putative binding site for miR-29b (Figure 3D). Subsequently, we verified through qRT-PCR and western blot assays that LV-miR-29b transfection decreased both mRNA and protein levels of DNMT3B in QBC939 cells (Figure 3E and 3F). Accordingly, luciferase reporter assays showed that transfection of miR-29b mimics significantly decreased luciferase activity driven by a WT-DNMT3B vector, while a Mut-DNMT3B vector had no significant effect (Figure 3G). Meanwhile, western blot assays showed that DNMT3B levels were significantly higher in both QBC939 cells and clinical cholangiocarcinoma samples, compared to HIBEC and normal tissues, respectively (Figure 3H and 3I). Accordingly, a significant, inverse correlation between miR-29b and DNMT3B expression was detected through qRT-PCR analyses of clinical cholangiocarcinoma specimens (Figure 3J). These results indicate that DNMT3B is a direct target of miR-29b in cholangiocarcinoma. 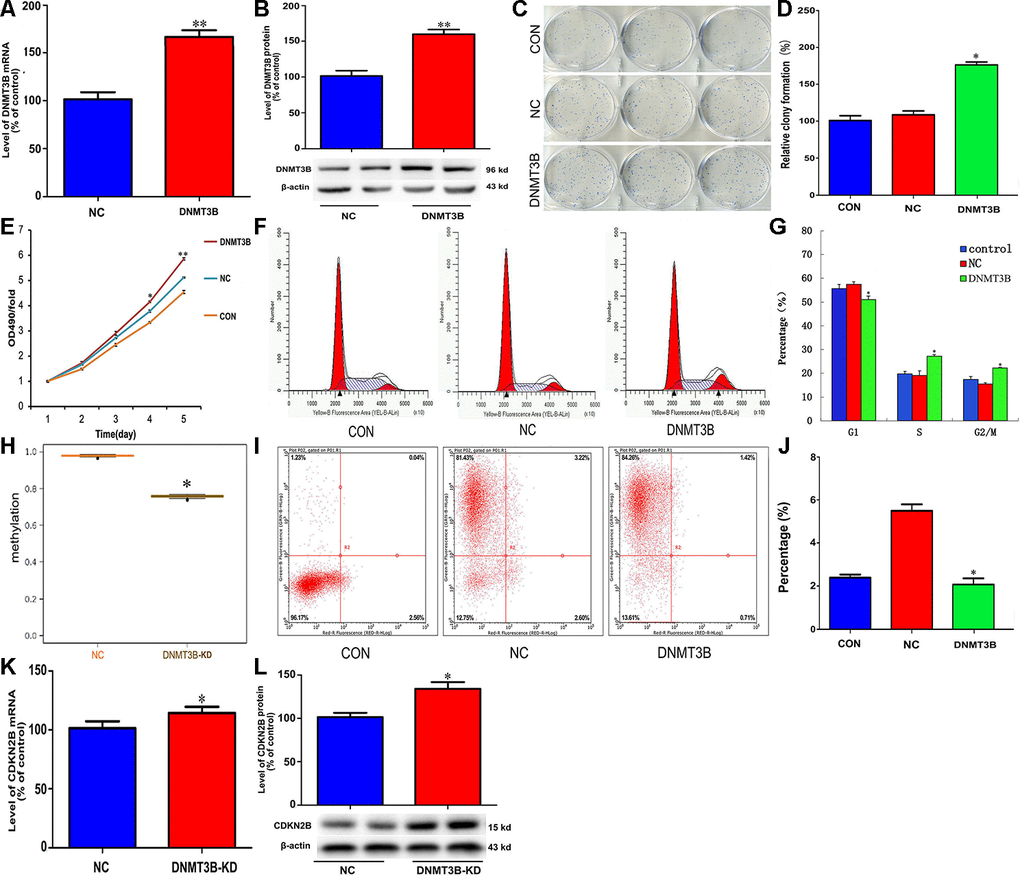 To further confirm the inhibitory effect of miR-29b on cholangiocarcinoma tumorigenesis, QBC939 cells stably overexpressing miR-29b were subcutaneously inoculated into nude mice. As shown in Figure 5A, 5B, the resulting tumors demonstrated significant growth delay compared to tumors formed by control cells. Following tumor excision, immunohistochemical analysis showed decreased DNMT3B and increased CDKN2B expression in tumors overexpressing miR-29b (Figure 5C–5G). Taken together, these results suggest that miR-29b acts as a tumor suppressor in cholangiocarcinoma by downregulating DNMT3B and promoting the expression of CDKN2B. 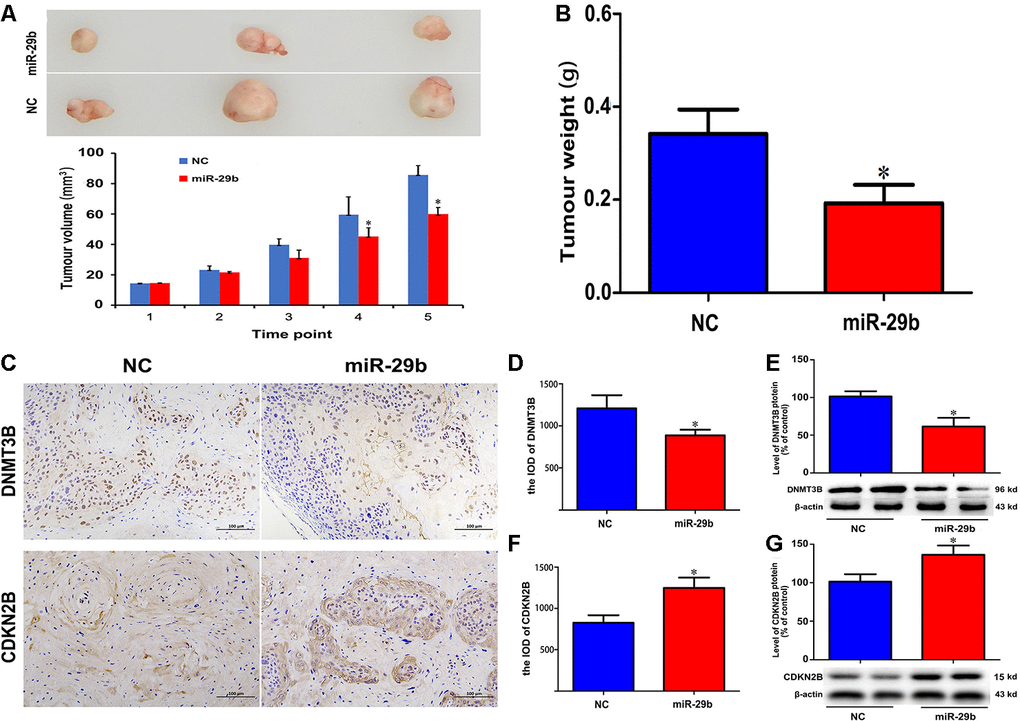 Accumulating evidence has revealed that miRNAs play important roles as either oncogenes or tumor suppressors during carcinogenesis [17–21]. Thus, unraveling the expression profile and function of individual miRNAs should contribute to the identification of useful diagnostic/prognostic markers and therapeutic targets for cancer treatment. In this study, we found that miR-29b was downregulated both in human cholangiocarcinoma QBC939 cells and clinical specimens, and this expression pattern was significantly associated with poor overall survival. These findings suggest that miR-29b acts as a tumor suppressor in cholangiocarcinoma.

DNA methylation is an important regulatory mechanism of gene transcription in mammalian cells [27]. Accordingly, aberrant or accidental methylation of the promoter of tumor-related genes has been observed in a wide variety of malignancies [28]. Promoter hypomethylation usually leads to gene activation [29]. In the present study, we identified DNMT3B as a downstream target of miR-29b, a fact reflected by the inverse expression pattern detected in clinical cholangiocarcinoma samples for these two genes. Accordingly, overexpression of DNMT3B significantly promoted cell proliferation and inhibited apoptosis in QBC939 cells. DNMT3B, a de novo DNA methyltransferase, is frequently increased in many malignancies [30]. This enzyme was reported to be essential for gene remethylation and might be a promising therapeutic target to prevent cancer progression [31–33]. We observed that miR-29b overexpression reduced methylation at the promoter of the CDKN2B gene, a cell growth regulator that inhibits cell cycle G1 progression, and this effect was mimicked by DNMT3B knockdown. Therefore, our data suggest that DNMT3B acts as an oncogene in cholangiocarcinoma.

In conclusion, our data revealed that miR-29b acts as a tumor suppressor in cholangiocarcinoma by promoting CDKN2B demethylation and transcription via suppression of DNMT3B activity. These findings highlight miR-29b as a promising diagnostic marker and potential therapeutic target for the treatment of cholangiocarcinoma and other cancers.

This study was approved by the research ethics committee of the Affiliated Hospital of Guizhou Medical University (NO. 2018005). Written informed consent was obtained from all patients. A total of 30 cholangiocarcinoma tissues and 20 adjacent tissues was obtained from cholangiocarcinoma patients undergoing surgical treatment. The cholangiocarcinoma cell line QBC939 was kindly provided by Professor Shuguang Wang of Third Military Medical University. Human intrahepatic biliary epithelial cells (HIBEC) were purchased from the Cell Bank of Shanghai Institutes for Biological Sciences, Chinese Academy of Sciences (Shanghai, China). Cells were cultured in DMEM medium with 10 % FBS and maintained at 37° C in a humidified incubator with 5 % CO2.

Cells (2 × 103 cells/well) were seeded into 96-well plates. At the indicated time points, 20 μl of MTT (5 g /L) was added into each well and incubated in the dark for 4 h. Then 150 μL of dimethylsulfoxide was added to each well. The absorbance of each well was measured at 490 nm (A490) on a spectrophotometer.

Cells (500 cells/well) were seeded into 6-well plates and cultured for 2 weeks until visible colonies formed. The colonies were fixed in paraformaldehyde, stained with crystal violet solution, and total colony numbers per well were counted.

After 48-h transfection, the cells were harvested and fixed in 75% ethanol at -20° C for 24 h. After being washed with PBS, the cells were stained by incubation in PBS containing 10 μg/mL propidium iodide (PI) and 0.5 mg/mL RNase A for 15 min at 37° C. Cell cycle analysis was performed using a FACSCalibur instrument (Becton Dickinson, USA).

Cell apoptosis was detected using an Annexin V-FITC apoptosis detection kit (Invitrogen, USA) according to the manufacturer’s protocols. After 48-h transfection, cells were harvested and dual-stained with 5 μl Annexin V and 5 μl PI for 30 min at room temperature. The stained cells were immediately analyzed by flow cytometry.

PCR primer design was performed using MethPrimer. After PCR amplification, indexed libraries of purified PCR products were generated using TruSeq DNA PCR-free library preparation technology according to manufacturer’s protocol (Illumina, USA). Denatured and diluted libraries were sequenced on an Illumina MiSeq benchtop sequencer with the sequencing-by-synthesis technology per manufacturer’s protocol (Illumina). The Illumina sequencing results were mapped to the genome using Bismark software. MethylKITR package software was then used to obtain site-specific methylation information. Finally, the methylation of each CpG site was defined as the number of methylated reads divided by the number of methylated and unmethylated reads combined. Results are expressed as the mean methylation over all CpGs and reads per sample and per amplicon.

QBC939 cells stably overexpressing LV-miR-29b or control LV-miR-NC vector were established by selection with puromycin (Sigma, USA). A total of 5×106 cells were then inoculated subcutaneously into 4-week-old female BALB/c mice (n = 6 per group). Starting on day 15, tumor size was measured every 7 days. After 63 days, mice were sacrificed, and tumors were dissected and weighed. All animal experimental procedures were performed in accordance with the guidelines of the Animal Ethical and Experimental Committee of the Affiliated Hospital of Guizhou Medical University.

Paraffin-embedded tissues obtained from mouse xenografts were sectioned to a thickness of 4 μm. Subsequently, sections were probed with anti-CDKN2B (GTX, #55855, 1:100 dilution) or anti-DNMT3B antibodies (GTX#129127; 1:100 dilution) at 4° C for overnight, incubated with suitable HRP-conjugated antibodies, and stained with diaminobenzidine tetrahydrochloride and hematoxylin as previously described [34]. Estimation of IOD (Integrated Optical Density) for each immunohistochemical staining was performed in 3 randomly selected microscopic fields per sample (original magnification 100× or 200×) using Image Pro Plus software (Media Cybernetics, USA).

Cells were harvested and lysed with RIPA buffer. Aliquots containing 30 μg of protein were separated by SDS-PAGE and transferred onto PVDF membranes (Millipore, Bedford, MA). Membranes were blocked with 5% non-fat dry milk for 1 h at room temperature and then incubated with the following specific antibodies: CDKN2B (CST, #36303), DNMT3B (CST, #57868) or β-actin (CST, #3700) overnight at 4° C, followed by incubation with a HRP-conjugated secondary antibody at room temperature for 1 h. Bands were detected by chemiluminescence (Millipore, USA).

All experiments were independently performed at least three times. Data are shown as the mean ± SD. Differences between groups were evaluated using Student’s t-test and one-way ANOVA with repeated measures. Kaplan-Meier analysis were used to analyze the impact of miR-29b on cholangiocarcinoma patients. The correlation between the expression of miR-29b and DNMT3B was performed employing the Pearson correlation test. Statistical analyses were conducted using GraphPad Prism 6.0. P <0.05 was considered significant.

Protocols for human tissue provision and animal experiments were approved by the Ethical Committee of the Hospital Affiliated to Guizhou Medical University, China (No. 2018005).