Copyright: © 2021 Lianyuan et al. This is an open access article distributed under the terms of the Creative Commons Attribution License (CC BY 3.0), which permits unrestricted use, distribution, and reproduction in any medium, provided the original author and source are credited.

As the world's population structure is increasingly aging, the incidence of cancer is growing [1]. It is expected that by 2030, seventy percent of malignancies and 85 percent of tumor-related deaths will occur in elderly people (over 65 years) [2]. As a highly malignant tumor, pancreatic cancer (PC) is the fourth leading cause of tumor-related death and is expected to become the second leading cause by 2030 in the US [3, 4]. Due to the lack of clinical manifestations in the early stage, most PC patients are diagnosed at an advanced stage accompanied by metastasis [5, 6]. Although the overall incidence of PC among all age groups is only 11.7 percent, the incidence of PC is 66.4 percent in patients over 65 years old and 91.1 percent in patients over 80 years old [7]. Therefore, treating elderly patients with metastatic pancreatic cancer (mPC), an increasingly expanding group, is going to be a serious clinical challenge.

It has been widely recognized that elderly patients’ internal environment (chronic inflammation and immune system dysfunction) is more likely to induce cancer under the stimulation of carcinogens [8, 9]. Moreover, it has been reported that age is a significant negative prognostic factor for PC [10], and the immune system of elderly patients plays a key role in the development of PC [11]. Therefore, elderly patients may represent a distinct subgroup that needs more targeted clinical management plans [12]. At present, surgery is not recommended for pancreatic cancer patients with distant metastases, especially elderly patients, who are more likely to receive chemotherapy, radiotherapy and other nonsurgical treatments [7, 13]. The aim of this study was to explore the clinical characteristics and prognostic factors of elderly patients with mPC.

Prognostic factors of mPC patients between 65 and 80 years old

Table 2. Multivariate analysis of overall survival and cancer-specific survival in metastatic pancreatic cancer with age above 65 and under 80 years old. 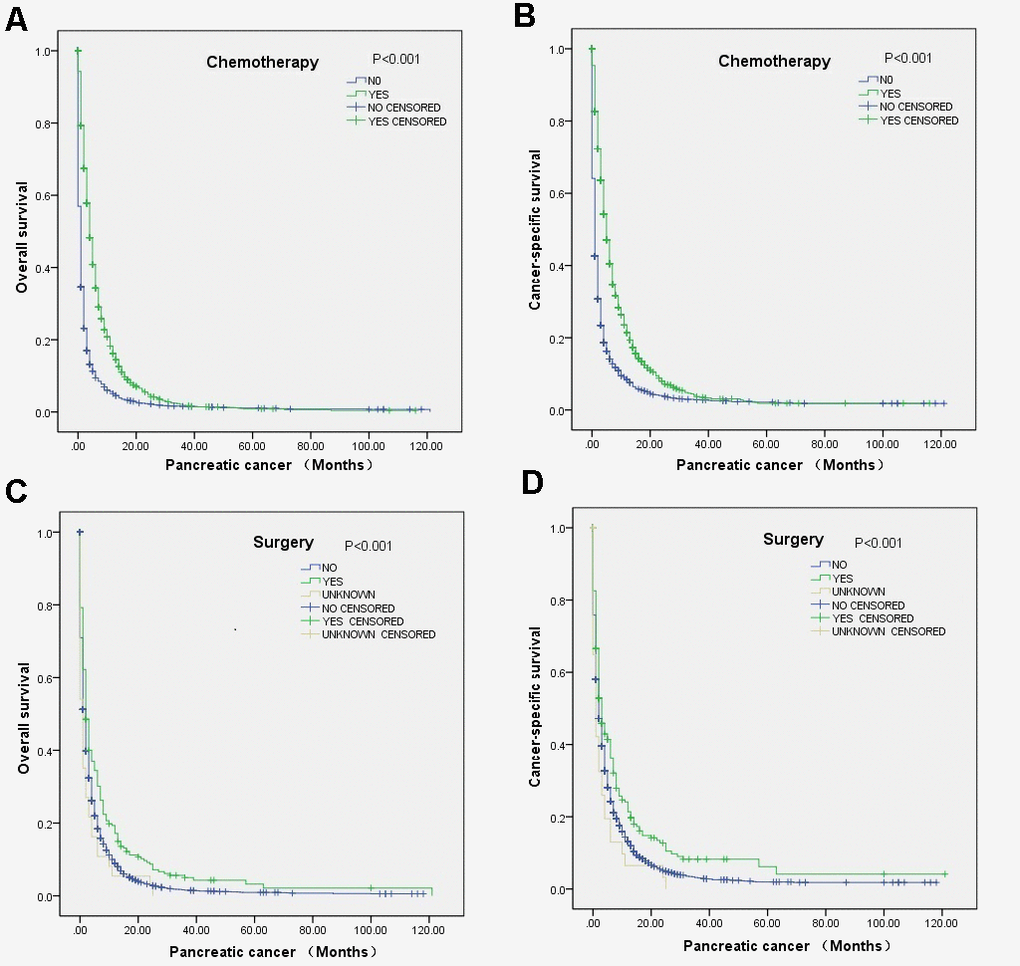 Multivariate Cox regression analysis indicated that chemotherapy was associated with improved OS (HR=0.45, 95% CI=0.41-0.49) and CSS (HR=0.43, 95% CI=0.39-0.48), and radiation showed a positive effect on OS (HR=0.64, 95% CI=0.45-0.92) but not CCS (Table 3). The relationships of chemotherapy and surgical resection with OS and CCS according to the log-rank test were also revealed through survival curves (Figure 2). Moreover, the analysis indicated that the factors associated with poor OS included male sex and liver metastasis (Table 3).

Patients who diagnosed at 2015 were set as the validation dataset, and detailed patients’ characteristics in different year of diagnosis was listed (Supplementary Table 1). For elderly group. we examined the performance of the prediction final model, both in the development dataset (2010-2014) and the validation dataset (2015) in terms of discrimination, which measured using values of 3-year time-dependent AUC. In the primary cohort, the model showed the discriminative ability in the validation cohort was agree with the development dataset (AUC: 0.699 vs 0.679, Supplementary Figure 2). Calibration was examined by plotting agreement between predicted and observed risks (Supplementary Figure 3). The imaginary line indicates a perfect calibration model in which the predicted probabilities are identical to the actual survival outcomes with the calibration slope of 1.0755 (0.9546 to 1.2117).

According to the characteristics of previously reported age groups [7], the elderly patients in this study were divided into a 65- to 80-year-old group and an over 80-years-old group. The statistical results showed that elderly patients accounted for the majority of all mPC patients (65.9%), especially those between 65 and 80 years old (40.9%). A comparison of the clinical characteristics among patients of different ages revealed that white patients were more likely to have a longer life span, possibly because white patients tend to have more access to medical services [14, 15].

The results also showed that female sex was a favorable prognostic factor for mPC patients over 80 years old, which may be because females tend to pay more attention to their health and make greater use of health-care services than males [16, 17]. In addition, the proportion of patients between 65 and 80 years old who were married was the highest (2399/4415, 54.3%) among all age groups, while the proportion of married patients between 65 and 80 years old was sharply reduced (997/2688, 37.1%), which may be attributed to the higher death rate of their spouses during this age range. Further prognostic analysis indicated that marriage is a favorable prognostic factor for mPC patients between 65 and 80 years old, which agrees with many previous studies [18–21]. The result indicates that elderly people who lack care from a marriage partner have a poor prognosis. Therefore, elderly patients who do not have spouses should be given more attention.

Further study shows that there was an increase in the proportion of patients with T1 and T2 stage disease and a decrease in the proportion of patients with lymph node-negative disease (N0) among elderly patients. This result can be attributed to the frequent routine check-ups of elderly patients, which can allow for the diagnosis of disease at an early stage. Surprisingly, prognostic factor analysis suggested that patients with T0 stage disease between 65 and 80 years old had a better prognosis than those with Tn stage disease. Metastases that develop at an earlier T stage have a stronger ability to invade and metastasize; therefore, the tumor is more malignant, and the prognosis is correspondingly worse. This result is consistent with a previous study [20].

The older the cancer patient is, the more basic diseases he or she has and the more likely he or she will die from these diseases [7, 13], which was confirmed by our results. The present study showed that the overall mortality rate was higher among older patients; however, the tumor-specific mortality rate decreased gradually with increasing age. Such a result suggests that attention should be paid not only to the treatment of tumors in aging patients, especially in those over 80 years old, but also to the systemic conditions and basic diseases of these patients. Therefore, we tend to use the CSS as the prognostic indictor in the elderly group.

Moreover, the analysis of metastatic sites (collected from 2010 to 2014) suggested that the most common target organs for metastasis are the liver, lung, bone, and brain. A comparison among the age groups suggested that as age increases, except for the increase in lung metastasis between 65 and 80 years old, the metastasis rate in all sites showed a decreasing trend. This may be because tumors in elderly patients are often less aggressive than those in young patients. The liver and lungs are vital organs in the human body. Once metastasis occurs in these sites, patients may have a worse prognosis. Similarly, the present analysis also indicated that lung metastasis, which is related to both OS and CCS, is a poor prognostic factor for patients between 65 and 80 years old, while liver metastasis is related to OS in those over 80 years old.

Data on treatment showed that the older the patient is, the less likely he or she is to receive treatment, including surgery, radiation, and chemotherapy. Nonetheless, chemotherapy was the most common form of treatment, followed by surgery and radiation. Further analysis suggested that chemotherapy has the greatest therapeutic benefit for patients between 65 and 80 years old or older. Chemotherapy has been proven to be the primary treatment for mPC [22–25]. Gemcitabine alone or in combination with other chemotherapeutic drugs and the FOLFIRINOX regimen (leucovorin, fluorouracil, irinotecan, and oxaliplatin) are recommended according to the patient’s performance status as well as comorbidity profile [26]. Surgical treatment is not recommended for mPC, especially in elderly patients, according to clinical guidelines. However, surgery has been demonstrated to improve the prognosis of mPC patients [20]. The present analysis also indicated that patients between 65 and 80 years old may still benefit from surgery, but not those over 80 years old (which may be due to their physical condition and inability to tolerate surgery). This result is in agreement with those for other metastatic cancers, such as those originating from renal cells [27], the colorectum [28], and the prostate [29, 30], which have been proven to benefit from surgical treatment of the primary tumor. Although radiotherapy has a positive effect on OS among those between 65 and 80 years old, this treatment failed to show a correlation with CCS and had no association with death in patients over 80 years old. Such a result should be attributed to the lower sensitivity of pancreatic cancer to radiotherapy in elderly patients [23, 31]. During the validation process, its C-index value of prediction model was almost similar to the development dataset (AUC: 0.699 vs 0.679, Supplementary Figure 2). Moreover, the calibration ability detection indicates a perfect condition that the predicted probabilities are identical to the actual outcome with a calibration slope of 1.0755 (0.9546 to 1.2117).

The present study utilized a population-based cohort, which has the advantage of minimizing selection bias in comparisons. However, there are still some limitations, such as the relatively incomplete clinical information of many patients. For example, data about the sites of metastasis were collected only from 2010 to 2014, and patients enrolled before this period lacked relevant data. A large proportion of data regarding T stage, N stage, or metastatic sites were recorded as not otherwise specified or unknown. Information on the specific chemotherapy regimen used was not available. Because of these limitations, further evaluations of treatment in elderly patients were hindered, and we cannot rule out an alternative explanation for some of our findings. The remaining questions could be answered in future studies with more detailed information regarding clinical characteristics and treatment protocols. Our findings may be useful to establish a treatment policy for elderly mPC patients.

The data examined in the present study were retrieved from the SEER-18 registry of the National Cancer Institute through SEER*Stat Software Version 8.3.5 software to query data from 18 SEER registries. As a publicly available database, the SEER database contains deidentified data; therefore, this study did not need approval from the institutional review board. Patients with a primary site of ‘pancreas’ between January 1, 2004, and December 31, 2014 were identified. The inclusion criteria were as follows: patients with International Classification of Diseases for Oncology, third edition (ICD-O-3) codes 8010, 8020, 8140, 8141 and 8144, and American Joint Committee on Cancer (AJCC) stage (6th edition) IV. Patients with unknown sites of cancer metastasis or unknown age and those who lacked survival data were excluded. The grouping of all patients by age was checked through X-tile software v3.6.1 (Yale University, New Haven, CT, USA), which was utilized to determine the optimal cutoff values [32]. Patients who diagnosed at 2015 were also collect at similar condition for validation.

Information collected from each patient included age, race, sex, marital status, primary tumor site, T stage, N stage, M stage, surgical resection of the primary site, chemotherapy recode, cause-specific death classification, survival time, and vital status. Cancer-specific survival (CSS) and OS (overall survival) were defined as the time between diagnosis and death from mPC and between diagnosis and death from any cause, respectively. Detailed information on systematic treatment is not provided in the SEER database.

Clinical and demographic features were compared between different groups with the chi-square test. The Kaplan-Meier method with the log-rank test was used to examine CSS and OS. A Cox proportional hazards model was applied for multivariable survival analyses of CSS and OS. P<0.05 was considered statistically significant. IBM SPSS Statistics 22.0 (IBM, Armonk, NY, USA) was applied for all statistical analyses.

A prediction model for the elderly group was developed according to the results of multivariate Cox analysis and using the Empowerstats software (http://www.empowerstats.com/en/). The predictive accuracy of the model was assessed by ROC curve analysis. Besides, 3-year calibrations of the model were performed by comparing the predicted CSS to the observed CSS.

This article does not contain any studies with human participants or animals performed by any of the authors.

All authors contributed in a manuscript as well as figure preparation are thoroughly familiar with its present version and are able to defend its content and conclusions.