Copyright: © 2021 Robbins et al. This is an open access article distributed under the terms of the Creative Commons Attribution License (CC BY 3.0), which permits unrestricted use, distribution, and reproduction in any medium, provided the original author and source are credited.

Background: Sleep disturbance and deficiency are common among older adults and have been linked with dementia and all-cause mortality. Using nationally representative data, we examine the relationship between sleep disturbance and deficiency and their risk for incident dementia and all-cause mortality among older adults.

Methods: The National Health and Aging Trends Study (NHATS) is a nationally-representative longitudinal study of Medicare beneficiaries in the US age 65 and older. Surveys that assessed sleep disturbance and duration were administered at baseline. We examined the relationship between sleep disturbance and deficiency and incident dementia and all-cause mortality over the following 5 years using Cox proportional hazards modeling, controlling for confounders.

Conclusions: Addressing sleep disturbance and deficiency may have a positive impact on risk for incident dementia and all-cause mortality among older adults.

Approximately 5.8 million adults in the U.S. are living with Alzheimer’s disease or related dementia, and 16 million are expected to be living with Alzheimer’s disease by 2050 [1]. Both sleep disturbances and abnormal sleep duration, although both often modifiable, are associated with the development and progression of Alzheimer’s disease [2]. Furthermore, recent work suggests that older adults (above age 65) who report signs of good sleep health (i.e., reports of waking and feeling refreshed) demonstrate better cognitive function [3], which may buffer against the development of Alzheimer’s disease and dementia. According to the National Sleep Foundation, there is more sleep disturbance reported among older adults than any other age group [4]. Data collected as part of a prospective observational study among older adults found over 50% of the participants reported at least one sleep difficulty “most of the time,” [5] whereas these complaints were reported by only 20% of younger adults (below age 65) [6].

Sleep disturbance and insufficiency have been shown to be associated with both the development and progression of Alzheimer’s disease and with all-cause mortality [7, 8]. Among a cohort of 737 older adults without dementia, adults with high sleep fragmentation had a 1.5-fold risk of developing Alzheimer’s Disease compared to those with low sleep fragmentation [9]. Similarly, in a prospective analysis, sleep disturbance was linked with incident cognitive impairment [10], while another prospective analysis found sleep disturbance was linked with both incident dementia as well as mortality [11]. In related studies, prospective analyses of 1,951 older adults found that difficulty maintaining alertness was associated with increased risk for dementia [12]; in a cohort of 1,245 older women, longer sleep latency was associated with higher risk of cognitive impairment over an average follow-up period of 4.9 years [13]. Furthermore, compared to cognitively normal individuals, those with either with self-reported obstructive sleep apnea (OSA) diagnosis [14] or physician-diagnosed OSA [15] developed more Alzheimer’s disease biomarkers, such as amyloid-beta plaques or tau proteins, over time compared to those without OSA. In addition, previous research has found associations between both long (>9 hours) and short (<7 hours) sleep duration and Alzheimer’s disease and dementia. Specifically, in research with data from the Framingham Heart Study, self-reports of longer sleep (>9 hours) were associated with all-cause dementia and clinical Alzheimer disease, but self-reports of short sleep (<6 hours) were not [16]. However, according to a meta-analysis of 27 studies, both short (< 7 hours) and long sleep duration (> 8 hours) were both associated with approximately 86% greater risk for Alzheimer’s disease and dementia [7].

Examining the relationship between each sleep characteristic and incident dementia 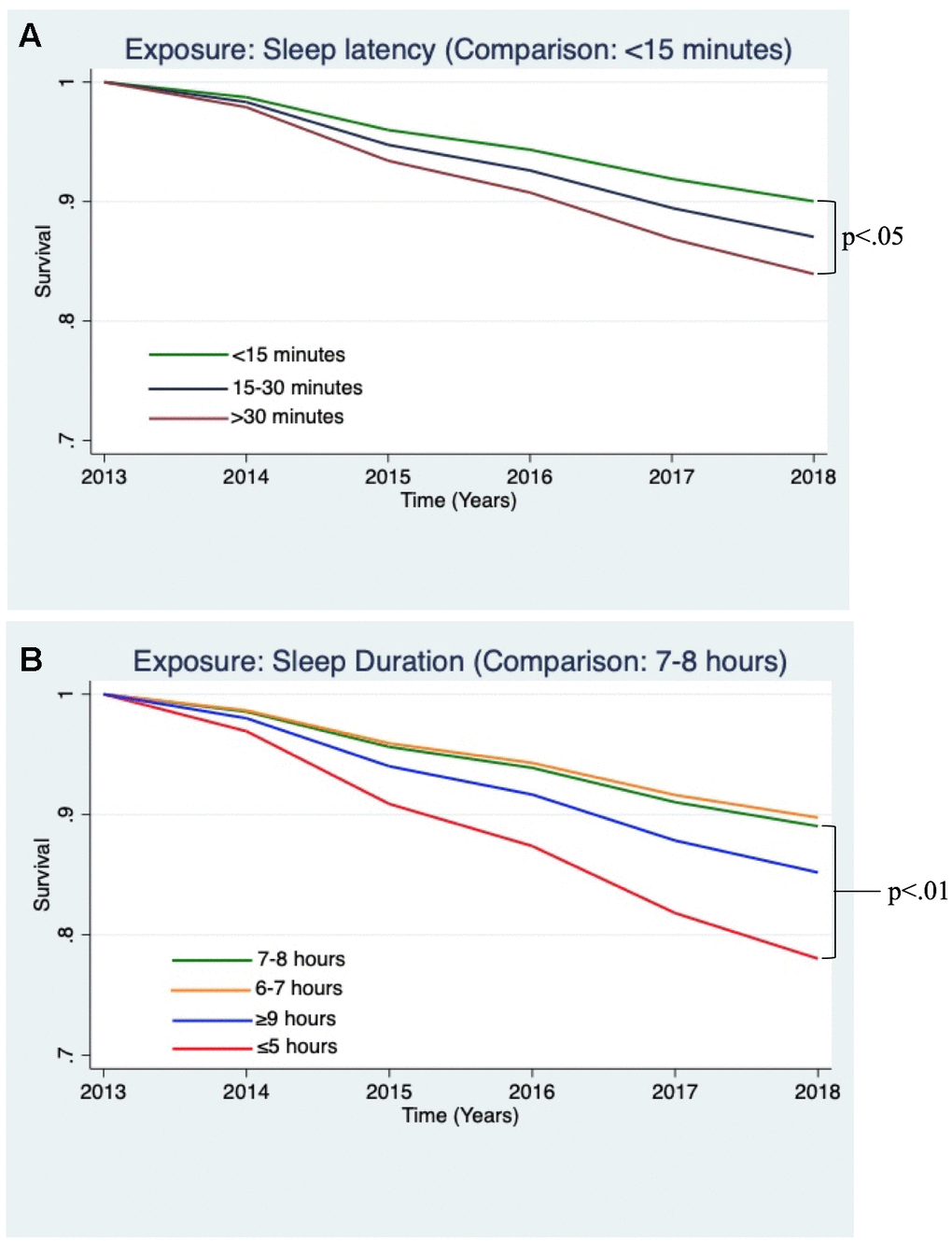 Examining the relationship between each sleep variable and all-cause mortality 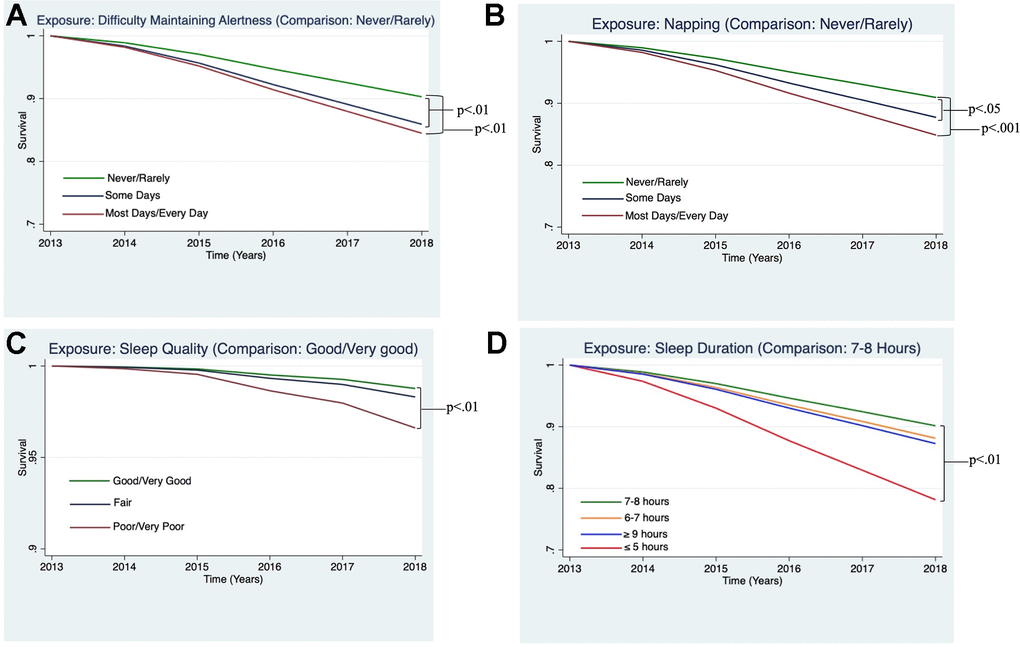 Overall, our findings show a strong relationship between several sleep disturbance and deficiency variables and incident dementia over time. Compared to sleeping 7-8 hours per night, sleeping fewer than 5 hours per night was associated with two-fold greater risk for incident dementia, and routinely taking 30 minutes or longer to fall asleep was associated with a 45% greater risk for incident dementia. We also found associations between sleep disturbance and deficiency variables and all-cause mortality. Specifically, an increased risk of all-cause mortality was observed for those routinely experiencing difficulty maintaining alertness, those reporting routinely napping, those with poor sleep quality, and those reporting sleeping 5 or fewer hours per night.

Nevertheless, the results from our primary objective in this study highlight an adverse association between sleeping 5 hours or fewer and both incident dementia and all-cause mortality. Our findings are consistent with other cohorts measuring sleep deficiency at baseline and cognitive impairment at follow up [23] and a meta-analysis that also documented a strong association between short sleep and all-cause mortality [20]. The association observed in our study between short sleep (5 hours or less) and incident dementia screening may be understood via the research drawing upon animal models to demonstrate brain toxin removal during sleep [24]. Specifically, research has shown that clearance of Alzheimer’s disease biomarkers, including amyloid-beta plaques or tau proteins [24], takes place at an accelerated rate in the brain during sleep compared to wakefulness, and the rate of buildup of Alzheimer's disease biomarkers is greater during wakefulness than during sleep. These data are consistent with the hypotheses that extended wakefulness and/or sleep deficiency are associated with greater buildup of toxic metabolites and/or impaired clearance of those metabolites, thereby increasing the risk of Alzheimer's disease [25, 26].

Several limitations and strengths are important to note in the current study. First, our analysis was conducted using questionnaire data that was captured from only approximately one quarter of the NHATS cohort, which was chosen at random in two study years. Without the full sample, we could not apply population weights to produce nationally representative estimates which may have resulted in different findings. Second, sleep data were only available in two study years. While NHATS is a longitudinal dataset and offers rich insights into the nature of dementia development and progression and ultimately all-cause mortality, our analyses were focused on the two years in which sleep questionnaires were administered. Third, several response categories had limited sample size. Specifically, fewer than 10% of the sample reported snoring either “some nights,” “most nights,” or “every night.” This limited our ability to conduct stratified analyses, such as examining the relationship between sleep characteristics and outcomes (i.e., dementia and mortality) by age or by chronic condition, which may have yielded illuminating findings. Fourth, our study examined all-cause mortality as reported by proxy. It would have been a strength if these data could have been obtained by the study using objective reports, such as death certificates. Our study offers numerous ideas for future research. First, there is an urgent need to identify the specific recommendations for improving sleep among older adults. These individuals face an already significant increase in sleep disturbance, yet may benefit from sleep health recommendations more nuanced than those for other categories of adults. Second, although not causal, our data suggest that a new lens for sleep may be important for older adults. Specifically, whereas younger adults are advised to sleep for 7 to 8 hours, our findings show that older adults who report sleeping 6 or more hours may receive a benefit from the standpoint of dementia and all-cause mortality beyond those who sleep 6 hours or less. Third, future research must be undertaken to consider the causal relationship between sleep and incident dementia and all-cause mortality among older adults.

Our study offers a contribution to the literature on sleep among aging populations in its assessment of incident dementia and all-cause mortality and a range of sleep characteristics among older adults. According to our findings from Cox proportional hazard models examining each sleep characteristic and outcome, we found that longer time to fall asleep and short sleep duration predicted incident dementia, while short sleep duration, difficulty maintaining alertness, napping, and poor sleep quality predict all-cause mortality. Short sleep duration was a strong predictor of both incident dementia and all-cause mortality, suggesting this may be a sleep characteristic that is important—over and above the other predictors—of adverse outcomes among older adults. Also, future research may consider the development of novel behavioral interventions to improve sleep among older adults.

Data from the National Health and Aging Trends Study (NHATS), an annual in-home, computer-assisted, longitudinal, nationally representative survey of community-dwelling Medicare beneficiaries 65 years and older drawn from the Medicare enrollment database, were analyzed. The NHATS data collection began in 2011 with a core interview administered annually. Adults ages 65 and older were sampled from the Medicare enrollment file. NHATS also used proxy respondents for those individuals who were unwilling or unable to complete an interview, a practice which has been shown to reduce attrition bias in longitudinal studies with older adults [27]. Additional information regarding the study’s sampling strategy, design and content are available to the public [28]. All respondents provided consent, and the study protocol was approved by the Johns Hopkins University Institutional Review Board (IRB). Our analysis of the publicly available, de-identified data from NHATS was considered exempt from IRB review.

To assess cognitive capacity, participants first rated their memory and then performed a memory-related activity (immediate and delayed 10-word recall) [29]. Also, as part of the memory assessment, participants were asked to respond to items related to orientation and perform a clock drawing test to assess executive function [30]. For proxy interviews, the Ascertain Dementia 8-item (AD8), an informant screener for dementia, was administered [31, 32]. A score of 2 or higher on the AD8 is indicative of dementia. Scores on the AD8 and performance on orientation, memory and clock drawing tests were used in our study to form a screening result of either negative (no dementia) or positive (risk for probable dementia). Over the follow-up interval, 321 individuals met the criteria for incident dementia.

The participant’s death was reported to the study personnel by informants during attempts to contact the participant for their annual interview.

In adjusted analyses, we controlled for time-varying covariates including marital status, chronic conditions, body weight, and depressive symptoms. Body weight was reported by participants annually in pounds. Depressive symptoms were measured using the Patient Health Questionnaire-2 which was administered as part of the NHATS [33]. Chronic conditions reported by the sample included self-reported diagnosis of the following conditions: heart attack, heart disease, hypertension, arthritis, diabetes, stroke, and cancer. We included a single variable indicating the number of chronic conditions reported by each individual in the adjusted models. Covariates which did not change over time, including sex and educational attainment, were entered from the baseline interview. Baseline age was also included as a covariate. In models examining all-cause mortality, dementia was also added as a confounder.

We computed descriptive statistics for demographic factors and for sleep characteristics (Table 1). Demographic and health condition data were obtained from the annual NHATS questionnaires in 2013 and 2014. We performed Cox proportional hazards modeling to examine the prospective relationship between sleep characteristics reported at baseline (either years 2013 or 2014) and risk of incident dementia (primary aim) and subsequently all-cause mortality (secondary aim) in the 5 or 4 years of follow-up. Using Cox proportional hazards models, we modeled each outcome (primary: incident dementia; secondary: all-cause mortality), entering the sleep variables individually (Tables 3, 4). Analyses were conducted both without confounders (unadjusted) and with confounders (adjusted). Next, using Cox proportional hazards models, we modeled each outcome, entering all sleep variables simultaneously in the same model while adjusting for covariates (Table 5).

The distribution of the data was assessed to ensure assumptions for all hypothesis testing were met (i.e., proportional hazards). All tests were two-sided with alpha set at 0.05. All analyses were performed in Stata (Version 16, College Station, TX).