Influence of atorvastatin on metabolic pattern of rats with pulmonary hypertension

Copyright: © 2021 Luo et al. This is an open access article distributed under the terms of the Creative Commons Attribution License (CC BY 3.0), which permits unrestricted use, distribution, and reproduction in any medium, provided the original author and source are credited.

Background: Metabonomics has been widely used to analyze the initiation, progress, and development of diseases. However, application of metabonomics to explore the mechanism of pulmonary arterial hypertension (PAH) are poorly reported. This study aimed to investigate the influence of atorvastatin (Ato) on metabolic pattern of rats with pulmonary hypertension.

Results: Ato significantly improved lung function by decreasing mPAP, RVHI, wall thickness, and wall area. Differences in metabolic patterns were observed among normal, PAH, and Ato group. The levels of GSK-3β and SREBP-1c were decreased, but HK-2 and CPT-1 were increased in the group PAH. Ato treatment markedly reversed the influence of MCT.

Conclusion: Ato significantly improved the pulmonary vascular remodeling and pulmonary hypertension of PAH rats due to its inhibition on Warburg effect and fatty acid β oxidation.

Pulmonary arterial hypertension (PAH) is a group of clinical pathophysiological syndrome, caused by various reasons. The mean pulmonary arterial pressure (mPAP) measured by right heart catheterization is more than 25 mmHg [1, 2]. The pathogenesis of PAH is very complex and has not been fully elucidated. It is believed that the main pathogenesis of PAH is the abnormal proliferation of smooth muscle cells, damage of fibroblasts and endothelial cells. The dysfunction of cells results in pulmonary vascular remodeling, and further leads to pulmonary artery lumen obstruction. Pulmonary vascular remodeling is believed to be the main reason for the continuous increase of pulmonary artery pressure [3–5]. However, the specific mechanisms during the initiation and progress of PAH have not been fully understood.

Statins, known as 3-hydroxy-3-methylglutaryl coenzyme A (HMG-CoA) reductase inhibitors, are widely used in the treatment of patients with elevated blood cholesterol, including atorvastatin (Ato), simvastatin, pravastatin, and so on [6]. Previous studies have found that atorvastatin could significantly reduce the pulmonary artery pressure of PAH rats induced by MCT, and can reverse the vascular remodeling during pulmonary hypertension [7]. Meanwhile, pulmonary vascular remodeling has already occurred before the change of pressure, but its mechanism has not been well elucidated. In addition, Ato can inhibit neointimal formation, smooth muscle cell proliferation and migration [8–10]. However, the mechanism of it improving vascular remodeling remains unclear.

In recent years, metabonomics has been widely used to develop biomarkers for several diseases [11]. Studies have shown that it is more sensitive than traditional diagnostic methods and can improve the diagnosis rate of diseases [12]. Metabonomics can be used not only for clinical diagnosis, but also for evaluating the clinical course of disease, the prognosis of patients, and the efficacy of surgery or drugs [13, 14]. The research on the metabolic model of diseases can help people understand the pathological process and deepen the understanding of some diseases. At present, there are few studies on the application of metabonomics to PAH. Increased biosynthesis of fatty acids was observed in the PAH birds measured using metabonomics profiling [15]. The differences of biologic mechanisms between exercise pulmonary hypertension and PAH were analyzed using metabonomics. They found that PAH group presented perturbations in several pathways such as collagen deposition, fatty acid, and glycolysis [16]. In addition, metabolomic profiles were conducted to differentiate PAH and idiopathic PAH [17]. However, the application of metabolomics in investigating how Ato improve PAH has not been reported.

Monocrotaline (MCT) is an alkaloid of phytotoxin, which is often used to establish animal models of pulmonary hypertension [18, 19]. In this study, MCT (60mg/kg) was used to establish PAH animal model. The aim of this study was to observe the changes of pulmonary artery remodeling and pulmonary arterial pressure in rats with pulmonary hypertension at different time points after atorvastatin treatment. Serum metabolic patterns were detected simultaneously to find the characteristic metabolites, and the relationship between pulmonary artery remodeling and metabolic model changes was analyzed. glycogen synthase kinase-3β (GSK-3β), hexokinase 2 (HK-2), sterol regulatory element-binding protein 1c (SREBP-1c), and carnitine palmitoyltransferase I (CPT-1) were detected to explore the possibility and mechanism of Ato in the treatment of PAH. This study might provide novel thought for the diagnose, prevention, and treatment of PAH.

In order to investigate the influence of Ato on PAH, PAH animal model was established. In the group PAH, remarkable alveoli distention, inflammatory cell infiltration, increased vessel walls, and structural disruption of the lung tissue were found indicating successful establishment of PAH model (Figure 1A). However, in the group Ato, decreased inflammatory cell infiltration and vessel walls, and relatively complete alveolar structure were observed (Figure 1A). To further investigate the effect of Ato on PAH, mPAP, RVHI, WT, and WA were measured. No significant differences were observed in terms of mPAP and RVHI after 1 day, 1 week, and 2 weeks between different groups (Figure 1B, 1C). However, after 3 and 4 weeks, the levels of mPAP and RVHI were increased significantly in group PAH compared with control, but Ato treatment could remarkably reversed these trends (Figure 1B, 1C). Similar findings were observed about changes of WT and WA. In the group PAH, the levels of WT and WA were promoted after 2, 3, and 4 weeks, but Ato remarkably decreased the values of them (Figure 1D, 1E). These results indicated that pulmonary artery remodeling appeared before the increase of pulmonary artery pressure, and Ato could improve pulmonary artery remodeling and reduce pulmonary artery pressure. 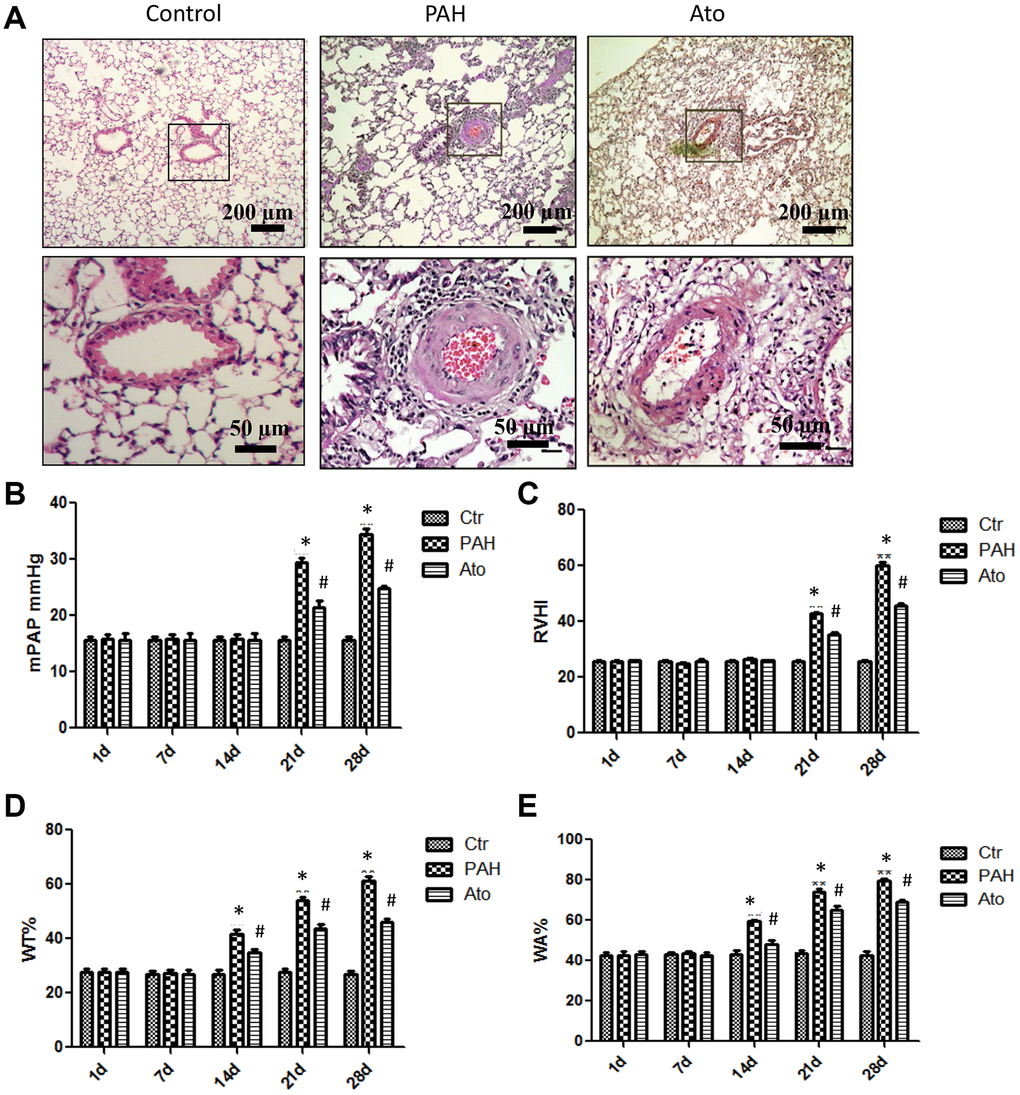 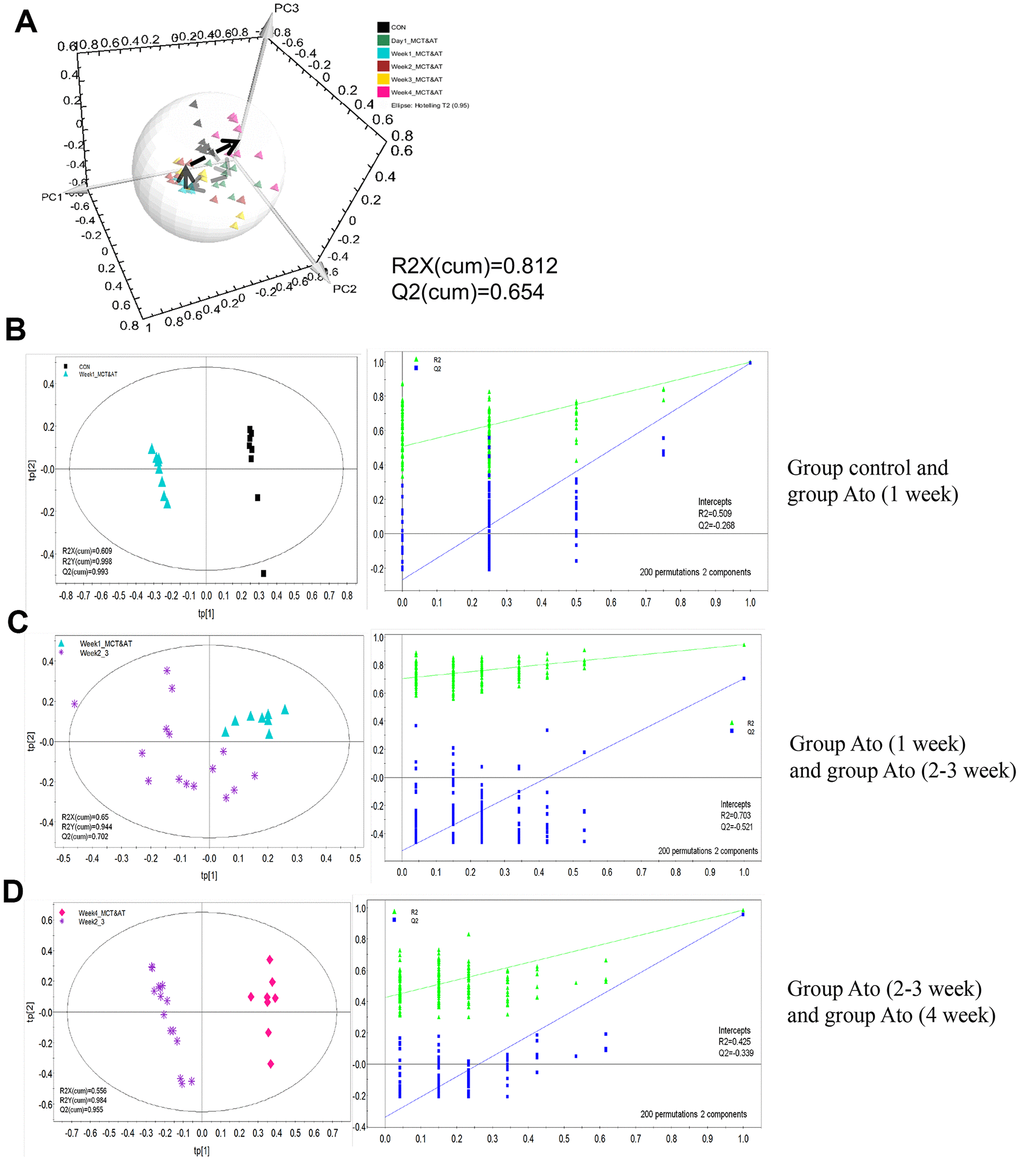 The serum metabolic patterns of group control and Ato (1 week) in the first predictive principal component (tp1) of was easily distinguished using OPLS-DA method (Left panel of Figure 3A). Variable importance in projection (VIP) and correlation coefficients (r) were performed to analyze tp1. The variables with VIP>1 and |r| exceeding the threshold were screened out (Right panel of Figure 3A), and differential metabolites were listed in the Table 1. Same method was applied to analyze differential metabolites between group Ato (1 week) and Ato (2-3 week), group Ato (2-3 week) and Ato (4 week). The differential metabolites were listed in the Tables 2, 3. 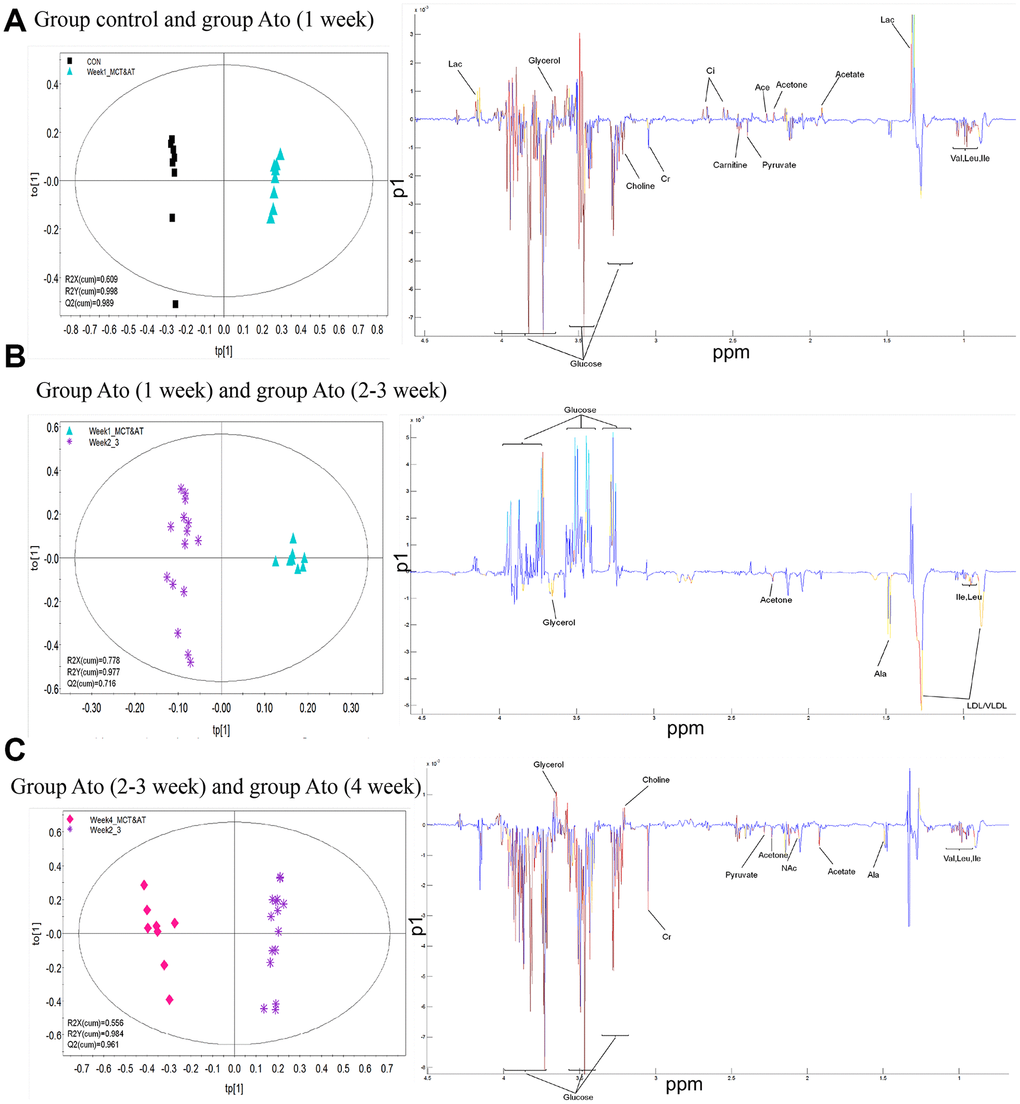 Influence of Ato on the mRNA expression of GSK-3β, HK-2, SREBP-1c, and CPT-1 in the lung tissues of rats

The mRNA levels of GSK-3β and SERBP-1c in group PAH were significantly decreased after 1, 2, 3, and 4 weeks (Figure 4A, 4B). However, after treatment with Ato, the decreased trend of GSK-3β and SERBP-1c was reversed markedly. On the contrary, the mRNA levels of HK-2 and CPT -1 were remarkably promoted in the group PAH, but the influence of PAH was weakened significantly by Ato (Figure 4C, 4D). 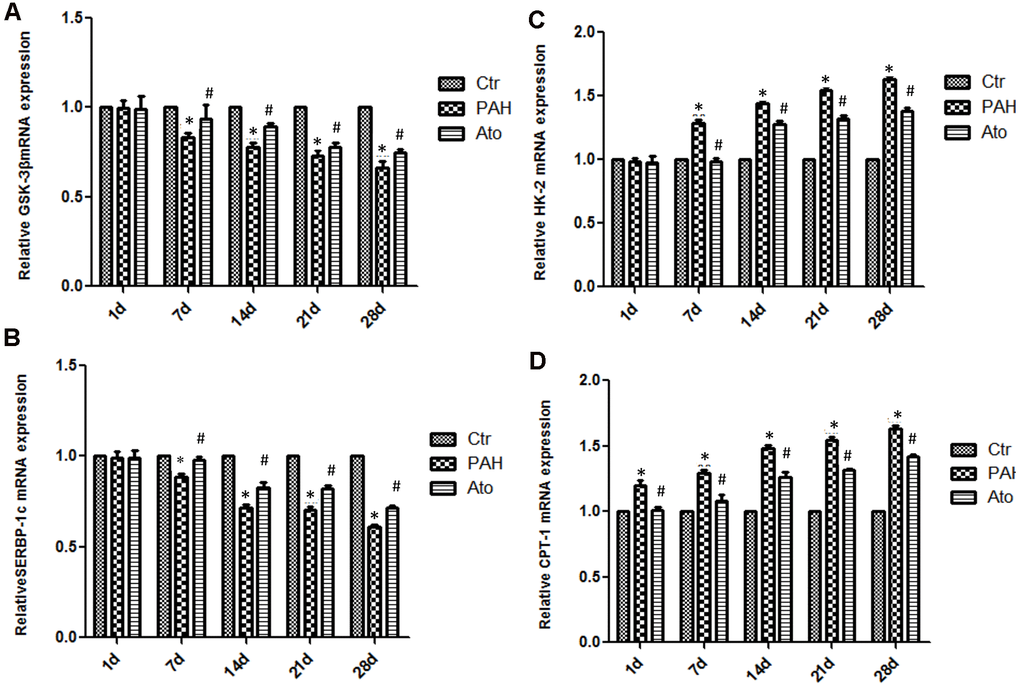 The protein expression changes of GSK-3β, HK-2, SREBP-1c, and CPT-1 in the group PAH

The protein expression of GSK-3β, HK-2, SERBP-1c, and CPT-1 in the group PAH at different time points were measured. The levels of GSK-3β and p-GSK-3β were markedly inhibited in the group PAH after 1, 2, 3, and 4 weeks (Figure 5A–5C). However, the protein expression of HK-2 and CPT-1 were gradually promoted (Figure 5D, 5F). Meanwhile, the level of SERBP-1c was suppressed in the MCT induced PAH animal model (Figure 5E). 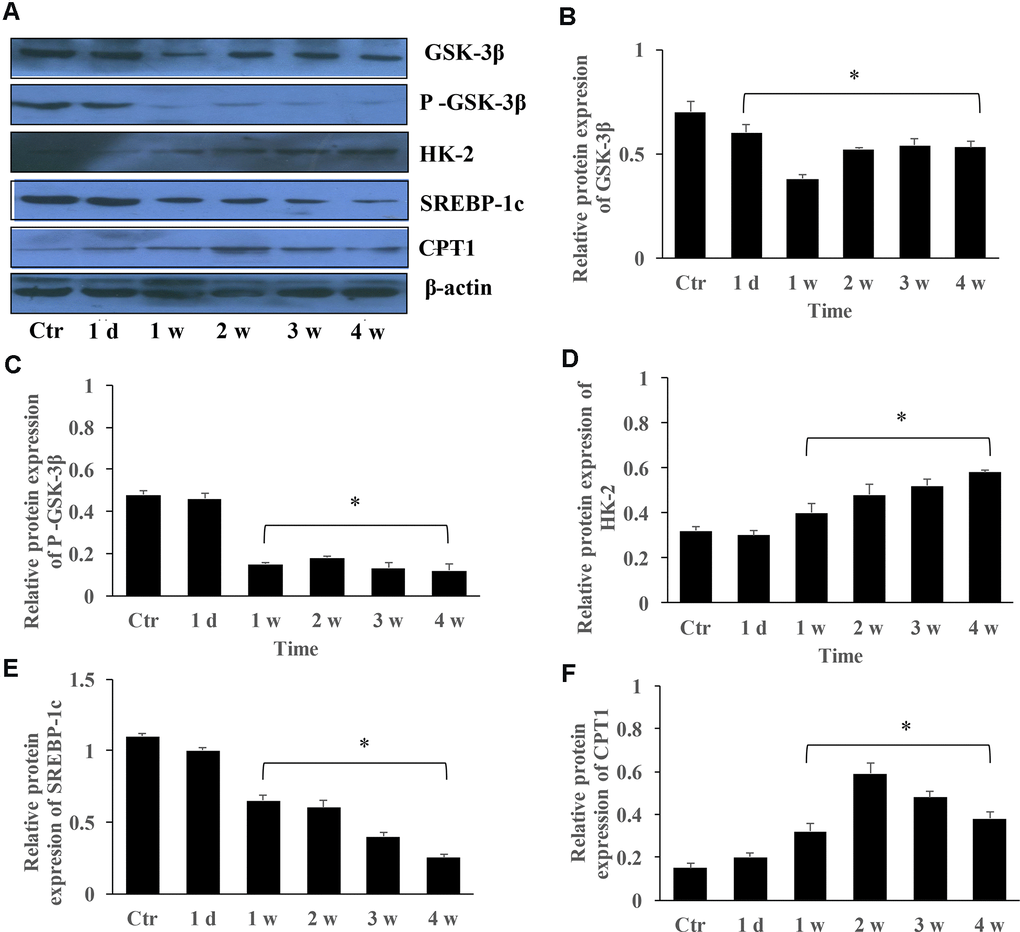 Influence of Ato on the protein levels of GSK-3β, HK-2, SERBP-1c, and CPT-1 in the lung tissues

In the present study, PAH animal model was established using MCT, and found that pulmonary vascular remodeling occurred before pressure rise. After 2 weeks, WT and WA were significantly increased, which indicated that the smooth muscle cells of pulmonary arterioles in rats with pulmonary hypertension had obvious hyperplasia and hypertrophy. This could further lead to the decrease of pulmonary vascular diameter and remodeling of pulmonary arterioles. The increase of mPAP, RVHI, and resistance in pulmonary vessels confirmed that the increase of the right ventricular post load, which further resulted in the hypertrophy of the right ventricle. The above symptoms were relieved after the treatment with Ato. 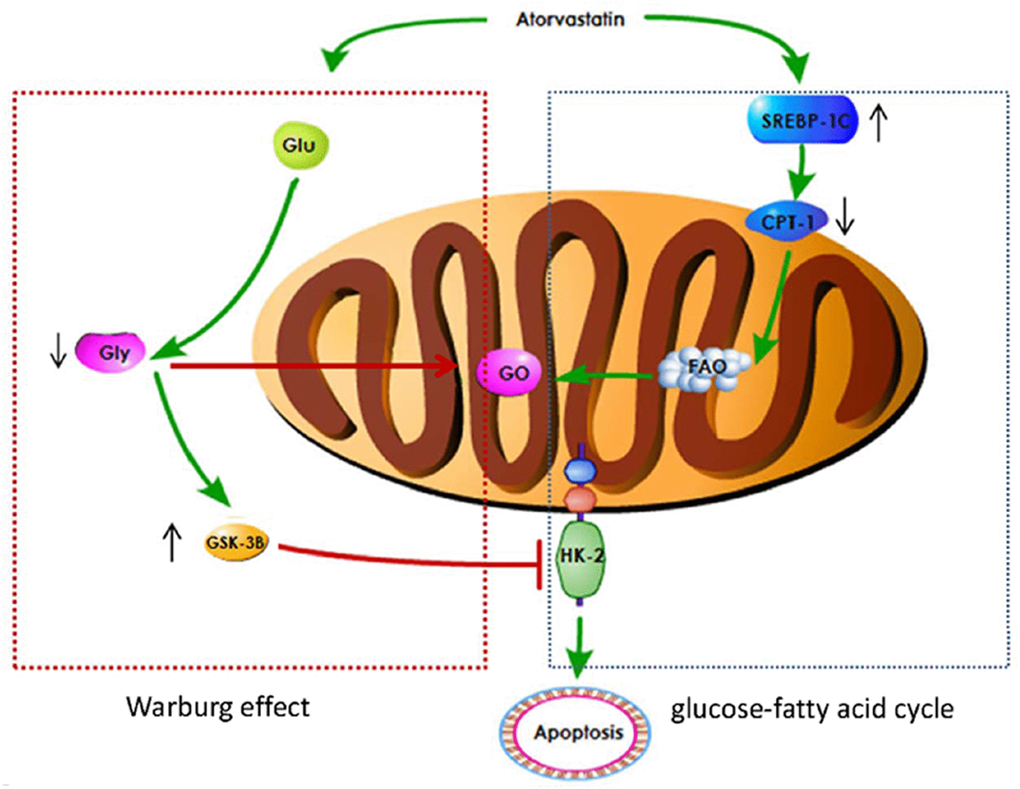 Figure 7. A schematic image for how Ato improve lung function of PAH rats.

Abnormal expression of GSK-3β is closely related to various fibrous and vascular diseases [24, 25]. GSK-3β plays an important role in cell growth, differentiation, mutation, apoptosis and signal transduction [26]. GSK-3β could regulate the opening of mitochondrial permeability transition pore, improve mitochondrial energy production, maintain the stability of mitochondrial outer membrane, and then reduce cell apoptosis, inhibit cell hypertrophy, and promote vascular regeneration [27, 28]. During anaerobic glycolysis, hexokinase (HK-2), as a key glycolytic enzyme, is up-regulated and can shift from cytoplasm to mitochondria. HK-2 could inhibit voltage-dependent anion channels (VDACs). VDACs could transfer apoptotic mediators into the cytoplasm, thus initiating apoptosis [29, 30]. It is believed that GSK3β could promote the binding of HK-2 with VDACs inhibiting cell apoptosis [31]. In the present study, the increase level of GSK3β by Ato might exert apoptosis inhibition effect though targeting HK-2. Therefore, we speculate that Ato may be a new therapeutic target in the treatment of pulmonary hypertension by regulating GSK-3β mediated HK-2.

Sprague Dawley rats (Male, 200-230 g) purchased from Shanghai Shrek laboratory animal Co., Ltd were randomly divided into three groups (10 rats/each group): Control, PAH and Ato. The rats in the group PAH were treated with MCT (60 mg/kg) through intraperitoneal injection, and the group control was treated with same amount of normal saline through intraperitoneal injection. The rats in group Ato were injected with MCT (60 mg/kg), and then treated with Ato (5 mg/kg) through gavage. Same dose of atorvastatin was given by gavage every day until the rats were sacrificed. The rats of group control and PAH were administrated with same amount of normal saline. All experiments were approved by the Ethics Committee of Fujian Medical University (2013010).

The rats were anesthetized by intraperitoneal injection with ketamine (100 mg/kg) and xylazine (10 mg/kg) firstly. The right external jugular vein and the right common jugular vein were exposed. One third of the diameter of the vessel was cut obliquely at an angle of 45° C from 4 mm to proximal part of heart, and the catheter was inserted 0.5-1.0 cm into the blood vessel along the incision direction, and the catheter tip was adjusted continuously to pass smoothly. Catheter was inserted 2-3 cm further to reach the right atrium, then slowly pull and rotate the catheter to enter the right ventricle. After the appearance of typical right ventricular waveform, the pulmonary artery can be reached by entering 1 cm. When the typical pulmonary artery pressure waveform appeared, it was stabilized for 5 minutes and then the pulmonary artery systolic pressure was recorded. The experiment was performed 3 times independently.

After sacrificing rats, the whole heart was taken, and the left and right atria and the roots of great vessels were separated. The right ventricular free wall was cut off and water was sucked out with filter paper. The weights of right ventricular free wall (RV) and left ventricle + interventricular septum (LV + s) were weighed. Finally, RVHI = RV / (LV + s) was calculated. The experiment was performed 3 times independently.

Six pulmonary arterioles with a diameter of 100-200 μm were randomly selected at a distance of 2 mm from the pulmonary hilum. The wall thickness (WT), external diameter (ED), total area (TA) and lumen area (LA) were measured using ipp6.0 image analysis software. According to the above data, the percentage of pulmonary artery wall thickness to diameter: WT=(2×WT/ED×100%), and the percentage of wall area (WA) to total vascular area: WA=([TA-LA]/TA×100%) were calculated. The experiment was performed 3 times independently.

PLS-DA analyses were performed on NMR data using Chenomx NMR Suite 8.0 software. The quality of the PLS-DA model was evaluated using a permutation test. Data were presented as means ± SD, and analysed by one-way analysis of variance using the Graphpad Prism 5.0 (GraphPad Software Inc., USA). P < 0.05 was considered to be significant. All experiments described above were performed at least three times.