Atherosclerosis (AS) is a chronic progressive inflammatory disease and a leading cause of death worldwide [1, 2]. Clinically, atherosclerosis remains a major public health challenge for long-term healthy living. Additionally, abnormal proliferation and migration of vascular smooth muscle cells (VSMCs) are key events contribute to development of AS [3–5]. Recently, several adipokines, such as adiponectin and visfatin, have been demonstrated to play a crucial role in the abnormal proliferation and migration of VSMCs, and targeting these adipokines has inhibited the development of AS [6, 7]. These findings suggest that intensive study of adipokines in VSMCs may provide a new clue for the treatment of AS. chemerin, which is also called retinoic acid receptor response protein 2 (RARRES2) or tazarotene-induced gene 2 protein (Tig2), is a novel adipokine [8]. Clinical studies have confirmed that circulating chemerin levels are positively correlated with the severity of AS [9]. More importantly, we have previously demonstrated that chemerin stimulates AS progression in apo-lipoprotein E−/− (ApoE−/−) mice [10]. These results suggested that chemerin signaling may be crucial to AS development. Chemokine-like receptor 1 (CMKLR1, also known as ChemR23), the first confirmed chemerin receptor, is highly expressed in plasmacytoid dendritic cells, macrophages, adipocytes, and endothelial cells [11]. The chemerin / CMKLR1 axis is a complex network involved in the regulation of immune responses, intimal hyperplasia, hypertension, and myocardial infarction [12–14]. Recent studies have revealed the role of chemerin / CMKLR1 in the cellular proliferation and migration of cancers [15]. However, the role of chemerin / CMKLR1 in atherosclerosis is still a highly contentious issue [10, 16]. Therefore, determining the functional and mechanistic regulation of chemerin / CMKLR1 in VSMCs is of interest. Natural products (NPs), as the basis for many widely used drugs, have been increasingly recognized. Curcumin, which is a component of turmeric, has been shown to have excellent therapeutic effects in a variety of aging-related diseases, such as tumors, neurodegenerative diseases, diabetes, and chronic inflammation [17–20]. The latest research confirms that long-term curcumin treatment can reduce plasma and liver cholesterol, thereby inhibiting early atherosclerotic lesions [21]. However, the role and mechanism of curcumin in the regulation of chemerin / CMKLR1 signaling remains unclear. In this study, we investigated the role of the chemerin / CMKLR1 signaling and the potential therapeutic effect of curcumin in VSMCs proliferation and migration during AS by establishing a high fat diet (HFD) mouse model.

chemerin has previously been shown to be correlated with AS, yet its underlying mechanisms remains elusive [9]. In this study, an HFD-induced AS mouse model was established, which exhibited significant extensive aortic atherosclerotic lesions (Figure 1A). We first analyzed arterial levels of chemerin / CMKLR1 in HFD-induced AS mice via immunohistochemistry (IHC) assay. As shown in Figure 1A–1D, aortic expressions of chemerin / CMKLR1 increased significantly in HFD mice. It's worth noting that a high expression level of Chemerin, but not CMKLR1, was observed in perivascular adipose tissue without HFD induction (Figure 1A, 1C). Given that Ki-67 is one of the most widely used markers for assessing proliferation [22], we then sought to correlate the expression of chemerin / CMKLR1 with Ki-67 in arterial tissues. As shown in Figure 1E, 1F, Ki-67 expression increased remarkably both in aorta and perivascular adipose tissue. Chemerin and CMKLR1 expressions were positively correlated with the Ki-67 level in the aorta (Figure 1G, 1H). These results suggest that high chemerin / CMKLR1 expression may play a role in cellular proliferation and the development of AS. 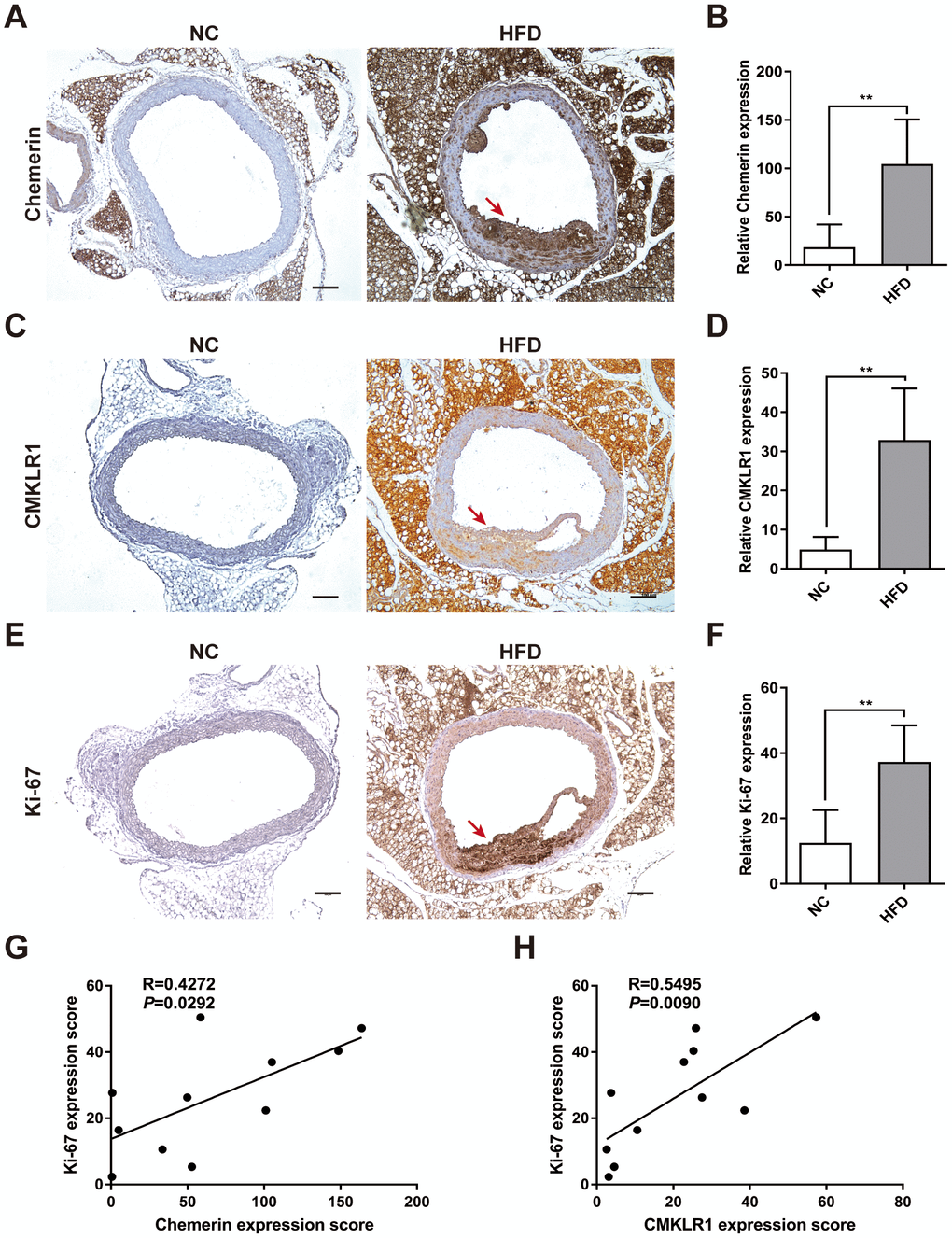 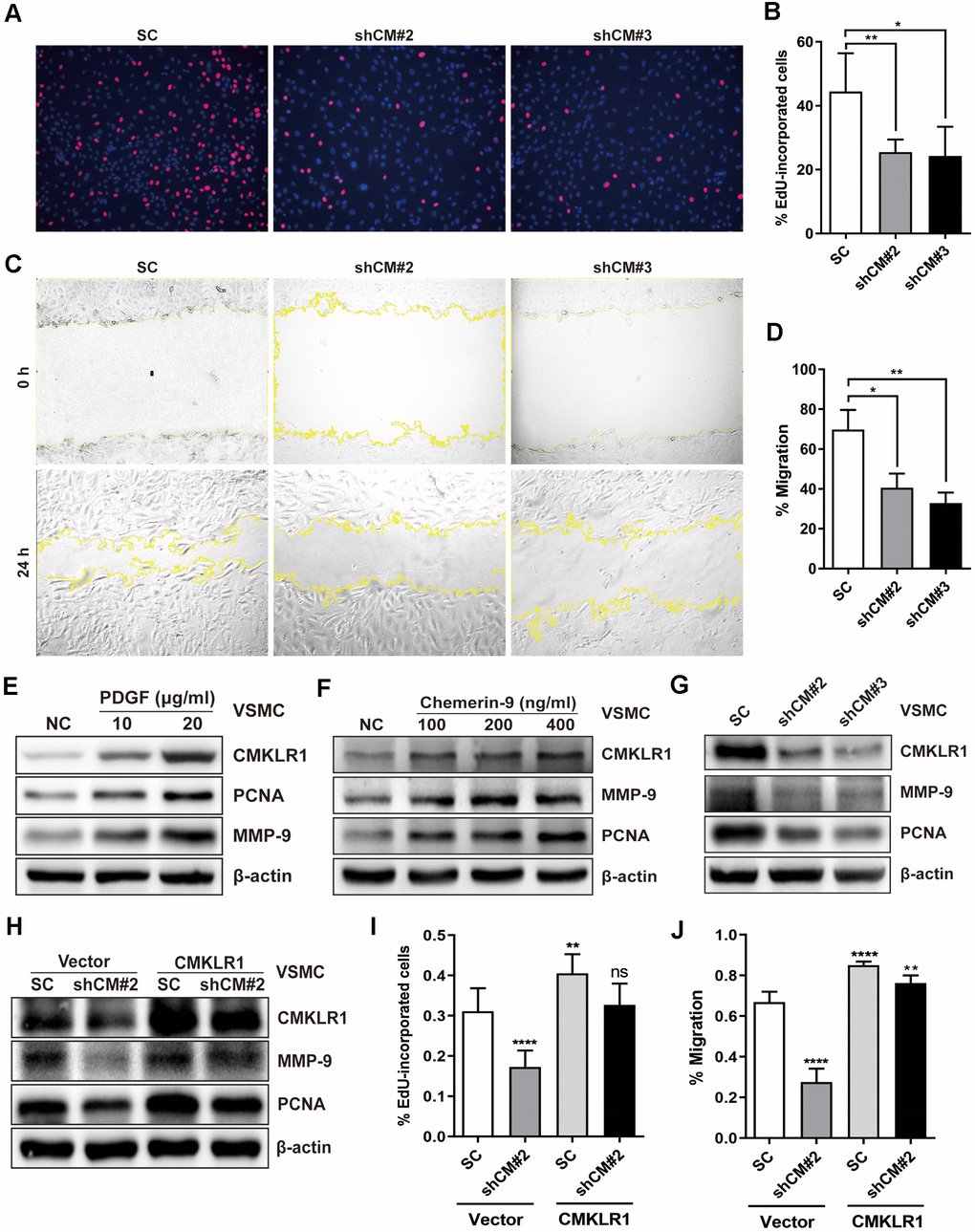 Then, we sought to identify the key factor responding to CMKLR1 knockdown-induced inhibition of VSMCs proliferation and migration. Recently, Lipocalin-2 (LCN2) was found to be a key regulator of cellular proliferation via Wnt / β-catenin signaling [26], and a previous study demonstrated that serum chemerin and LCN2 levels were positively correlated in patients suffered from metabolic and inflammation-related diseases [27]; however, the relationship between CMKLR1 and LCN2 remains unknown. Thus, we first examined LCN2 expression in HFD-induced AS mice via IHC assay and found that aortic LCN2 expression increased significantly in HFD mice, and was positively correlated with CMKLR1 expression (Figure 3A, 3B). We further confirmed that Chemerin-9 treatment induced the LCN2 expression (Figure 3C). CMKLR1 knockdown consistently inhibited the protein and mRNA expression of LCN2 (Figure 3D, 3E). In contrast, overexpression of CMKLR1 by transfecting the plasmid encoding CMKLR1 markedly recovered the inhibition of LCN2 by CMKLR1 depletion (Figure 3F). Functionally, overexpression of LCN2 by plasmid significantly recovered the inhibition of VSMCs proliferation and migration resulting from CMKLR1 depletion (Figure 3H, 3I and Supplementary Figure 2). In agreement with this finding, overexpression of LCN2 also greatly recovered the expressions of PCNA and MMP-9 inhibited by CMKLR1 depletion (Figure 3G). 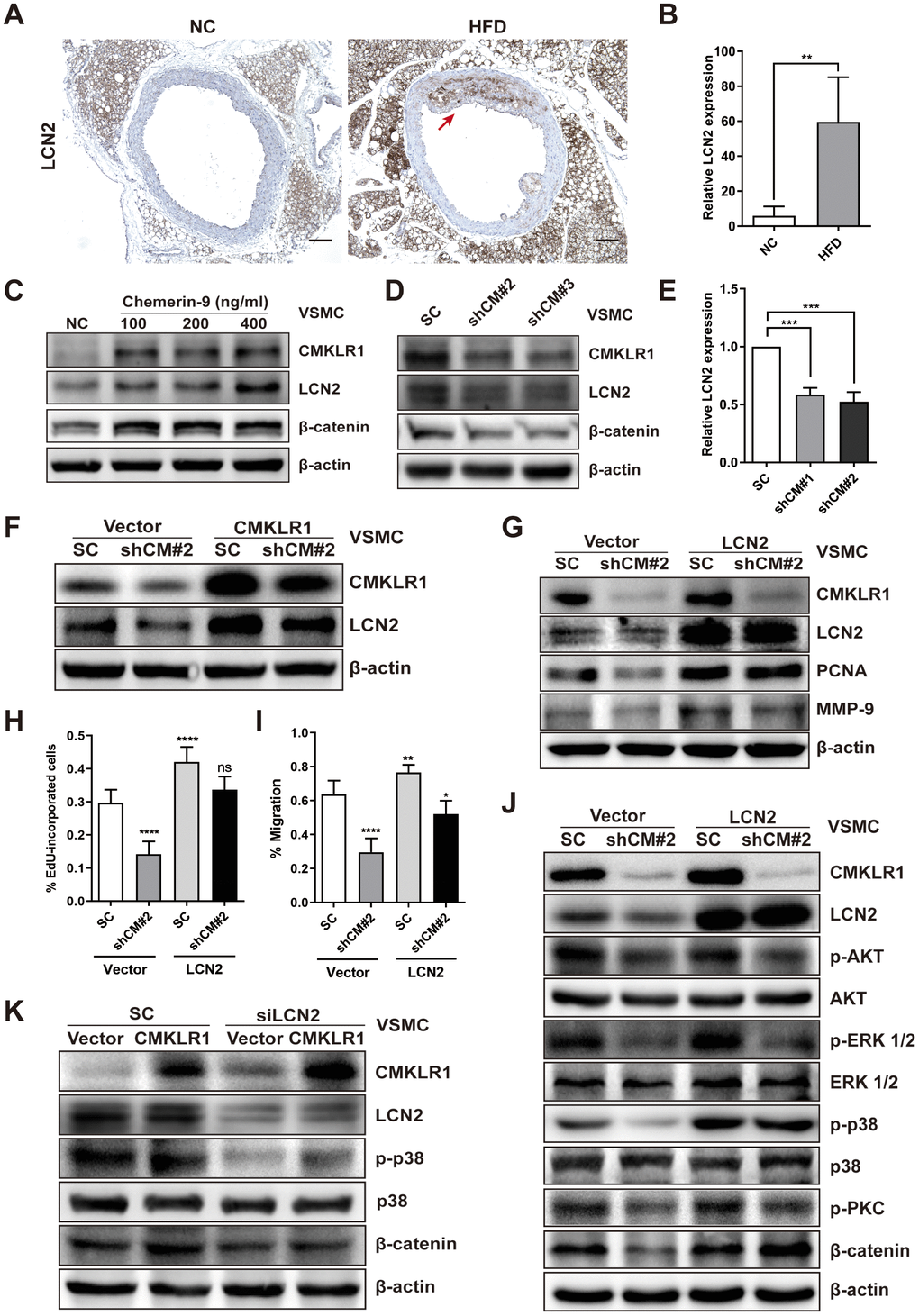 We then sought to explore the possible involvement of LCN2 in CMKLR1 depletion-induced inhibition of VSMCs proliferation and migration. As shown in Figure 3J, we determined a series of downstream signaling pathways of CMKLR1. Overexpression of LCN2 by plasmid significantly recovered the CMKLR1 depletion-induced inhibition of β-catenin, as well as p-p38, which is a key factor upregulating cellular migration. In agreement with this finding, knock down of LCN2 also greatly abolished the expressions of β-catenin and p-p38 triggered by CMKLR1 overexpression (Figure 3K). These results demonstrate the crucial role of LCN2 in upregulating CMKLR1-induced VSMCs proliferation and migration via the p38 / MAPK and Wnt / β-catenin signaling pathways. 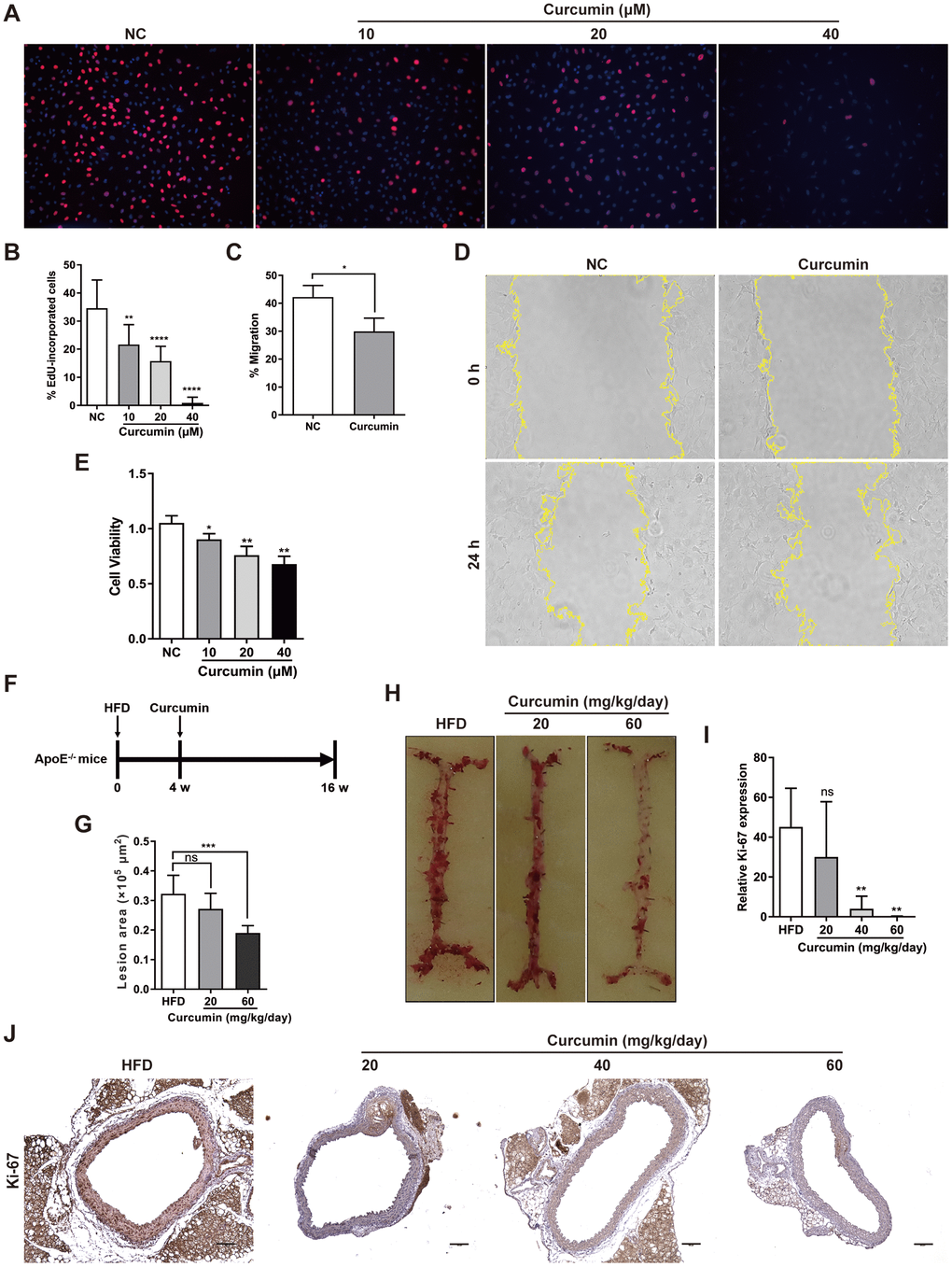 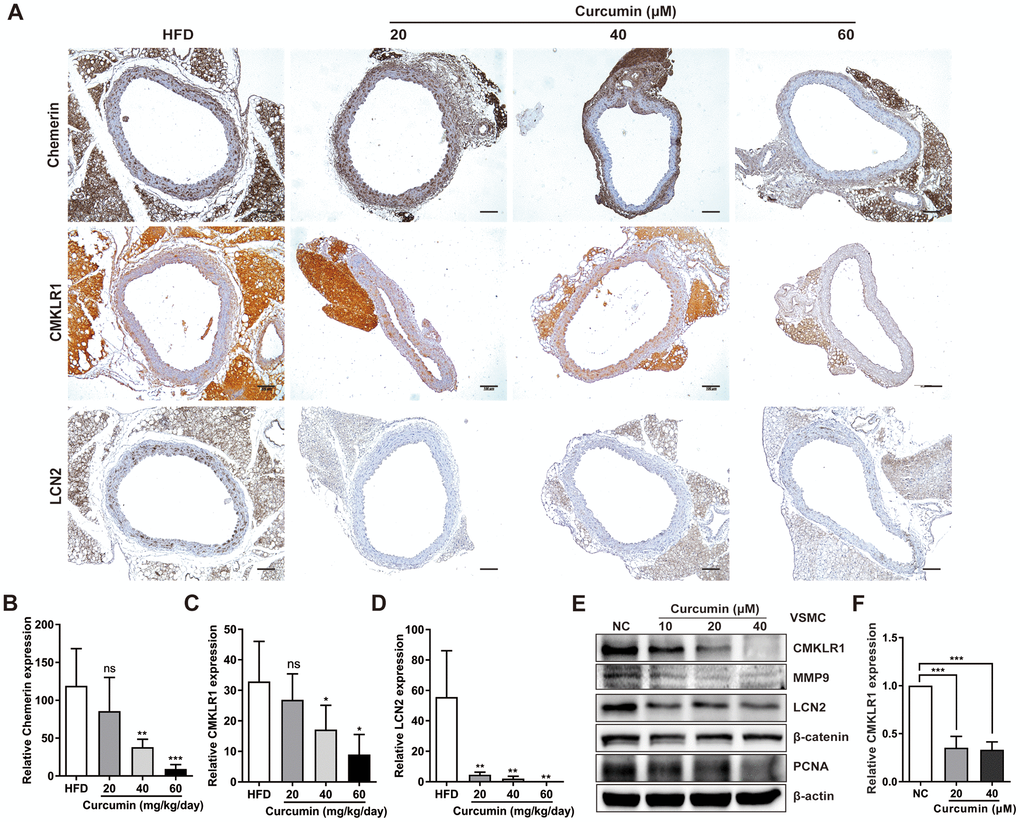 For the isolation and culture of primary VSMCs, eight-week-old C57BL/6 mice were anesthetized and soaked in 75% ethanol. The chest of each mouse was opened, and the aorta was completely separated then placed in 35-mm wells containing phosphate-buffered saline (PBS) or Dulbecco’s Modified Eagle’s Medium (DMEM). The outer membrane of the blood vessel was torn, and the blood vessel was cut into 1 mm2 tissue pieces with ophthalmic scissors. The tissue pieces were attached to the 35-mm dish and incubated upside down at 37° C under a humidified atmosphere with 5% CO2 for 30 min. Then, fresh complete culture medium was added after the tissue attachment to the dish. Primary VSMCs grown from the tissue were used for all experiment between 4-10 passages. Curcumin (Sigma-Aldrich, C1386, USA) was diluted in dimethyl sulfoxide (DMSO, 2650, Sigma-Aldrich, USA); the stock solution was 50 mM. Dilute solutions of all reagents were used within 1 month. Recombinant mouse chemerin-9 (Catalog number: 2325-CM-025) was purchased from R&D systems, USA, and the stock solution was dissolved in PBS containing at least 0.1% 100 μg/ml bovine serum albumin (BSA).

Male ApoE-/- mice (6-8 weeks old) obtained from Gempharmatech of Information Technology Center (Nanjing, China) were used for the AS model, and all animal experiments were maintained in a specific pathogen-free laboratory animal center of Shenzhen People’s Hospital. All animal maintenance and procedures were carried out in strict accordance with the recommendations established by the Animal Care and Ethics Committee of Shenzhen People’s Hospital and the Guidelines for Animal Experiments set by the Bureau of Sciences and Techniques of Guangdong Province, China (Research Ethics Board approval number: SYXK2007-0025). Negative control (NC) group ApoE-/- mice were fed with normal diet. HFD group mice were fed with 60% kcal high-fat diets (BIOPICK, D12492, China). Curcumin group mice were fed with 20 40, 60 or 100 mg/kg/day by gavage. NC and HFD group mice were fed for 16 weeks before sacrifice. For the curcumin group, ApoE-/- mice were fed with HFD for 1 month and then with different doses of curcumin and HFD for another 3 months.

Artery specimens (4 μm slices) were harvested for immunohistochemical staining, dewaxed, rehydrated with different alcohol concentrations. Slides were incubated with 5% goat serum at room temperature for 30 min, and antibodies with optimal concentrations used for the study proteins were incubated overnight. Freshly prepared 33’-diaminobenzidine substrate solution was added to each section. Slides were then differentiated with 1% hydrochloric acid alcohol, dehydrated and restored to blue color with ammonia at different concentrations (from low to high), and further dehydrated until transparent in xylene. Then the slides were sealed with neutral gum.

VSMCs were plated in a 6-well plate at a 1 × 105 /well density. Then, 1× EdU solution was incubated for 5 h and 1 ml fixed fluid was added for 15 min after removing EdU solution and 1 ml transparent liquid was added for 10 min. Cells were incubated with 500 μl Click Additive Solution at room temperature in the dark for 30 min, washed thrice with wash buffer and the optical density value at 495 nm was measured (BeyoclickTM EdU cell proliferation kit with Alexa Fluor 555; Beyotime, 0075S, China).

VSMCs were cultured in 6-well cell plates with complete medium until 100% confluent. A 200 μl pipette tip scratched the surface of the cells and the cells were washed twice with PBS. Then, pictures of each “wound” were taken using an inverted microscope (Olympus, Tokyo, Japan). Cells were incubated at 37° C containing 5% CO2 and pictures of each time point and concentration were taken microscopically.

Cell viability was determined using a CCK-8 kit (DoJinDo, CK04, Japan) according to the manufacturer’s instructions. VSMCs (0.5 × 104 cells/well) were seeded into a 96-well plate before treatment and cultivated for 48 h with curcumin or chemerin-9. Then, cells were treated with 10 μl CCK8 reagent diluted in 90 μl DMEM medium and incubated for 2 h at 37° C with 5% CO2 incubator. The density was measured using a Spark 10M multimode microplate reader (Tecan, Switzerland) at 450 nm. Three replicates were prepared for each concentration.

Lentiviruses expressing shRNA targeting SC or CMKLR1 were purchased from GenePharma (Shanghai, China). For the lentiviral infection, VSMCs were cultured with viral supernatant (multiplicity of infection, MOI = 100) for 24 h and were then selected with 2 μg/ml of puromycin for 3 days. Puromycin (1 μg/ml) was used to maintain stable cells. The targeting sequences of shCMKLR1 are specified in Supplementary Table 1.

siRNA targeting LCN2 sequence was used for knockdown experiments (GenePharma, Shanghai, China). Cells were cultured overnight at a density of 1 × 105 cells in a 6-well plate. siRNA targeting LCN2 was transfected into cells using RNAimax (Lipofectamine™ RNAiMAX Transfection Reagent; Invitrogen, 13778150, CA, USA) for 8 h. Cells were then cultured with fresh complete medium for 3 days. Targeting sequence of the above siRNA is specified in Supplementary information (Supplementary Table 3).

The ApoE-/- mice were exposed to the heart, and the origin of the autonomous artery was dissected and separated from the whole aorta to the bifurcation of the common iliac artery of the abdominal aorta. The dissected aorta was washed with normal saline and placed in the fixator (4% paraformaldehyde, 5% sucrose, 2 μmol/l ethylenediaminetetraacetic acid, pH 7.4). It was then stained with 0.5% Sudan IV staining solution (0.5 g Sudan IV, 50 ml acetone, 50 ml 70% ethanol) for 6 min, and transferred to 80% ethanol for decolorization. Pictures were taken using a Digital Single Lens Reflex Camera (Canon, Japan).

The transparency document associated with this article can be found in the online version.