Copyright: © 2021 Shen et al. This is an open access article distributed under the terms of the Creative Commons Attribution License (CC BY 3.0), which permits unrestricted use, distribution, and reproduction in any medium, provided the original author and source are credited.

MicroRNA (miRNA) is an endogenous non coding single stranded RNA with a length of 18-22 NT. 50% of the known miRNAs are located in tumor related gene regions/fragile sites, suggesting that miRNAs can act as carcinogenic or tumor suppressor genes to promote or inhibit cancer. Studies have shown that miRNAs regulate post transcriptional gene expression mainly through the degradation or translation inhibition of target gene mRNAs, and the imbalance and/or mutation of miRNAs can cause tumorigenesis [13–19]. Many miRNAs can play a dual role in tumor both as tumor suppressors and oncogenes by targeting corresponding tumor suppressor genes or oncogenes [20]. Moreover, dysregulation of miRNA expression has been associated with cancer onset, progression, and metastasis. In cancer, tumor suppressor miRNAs act as antagonists based on their capability to repress oncogenes, resulting in the occurrence and development of various malignant tumors such as breast cancer. Furthermore, dysregulation of miRNA is predominantly involved in the proliferation and metastasis of triple-negative breast cancer through epithelial-mesenchymal transformation (EMT), which may be useful in the diagnosis, therapy assessment, and prognosis of breast cancer. Therefore, investigating the target regulatory function of miRNA can provide a new insight into the clinical treatment of breast cancer [21, 22].

Accumulating evidence has indicated the roles of tumor-derived miRNAs in breast cancer. In this context, Youness et al. revealed that in TNBC, knockout of sONE, a newly discovered lncRNA, resulted in a significant decrease in the expression of tumor suppressor TP53 and an increase in the expression of oncogenic transcription factor c-myc. Moreover, sONE affected the progression of TNBC by altering the expression levels of a panel of its downstream tumor suppressor miRNAs, including miR-34a, miR-15, miR-16, and let-7a [23–26]. Mohammadi-Yeganeh et al. demonstrated that miR-381 targets primary genes of the Wnt signaling pathway and inhibit the development of TNBC; besides, overexpression of miR-381 can reduce the migration and invasion potential of MDA-MB-231 cells; at the same time, overexpression of miR-381 can inhibit the capability of lung and liver metastasis and prolong the survival in murine TNBC model [27, 28].

An increasing number of studies have confirmed that miR-205 is associated with the occurrence of a variety of tumors, and its expression status is different in different tumor types, such as low expression has been found in prostate cancer; conversely, the significantly high expression has been detected in endometrial cancer, non-small cell lung cancer, head and neck squamous cell carcinoma, suggesting that miR-205 may function as a tumor suppressor or oncogenic miRNA in specific tissues [29–31]. However, the precise molecular mechanism and function of miR-205 in breast cancer remains obscure. In this study, we investigated the potential regulatory role of miR-205 in breast cancer occurrence and development. Using gain- and loss-of-function assays, we further confirmed the downstream target genes regulated by miR-205 both in vivo and in vitro. 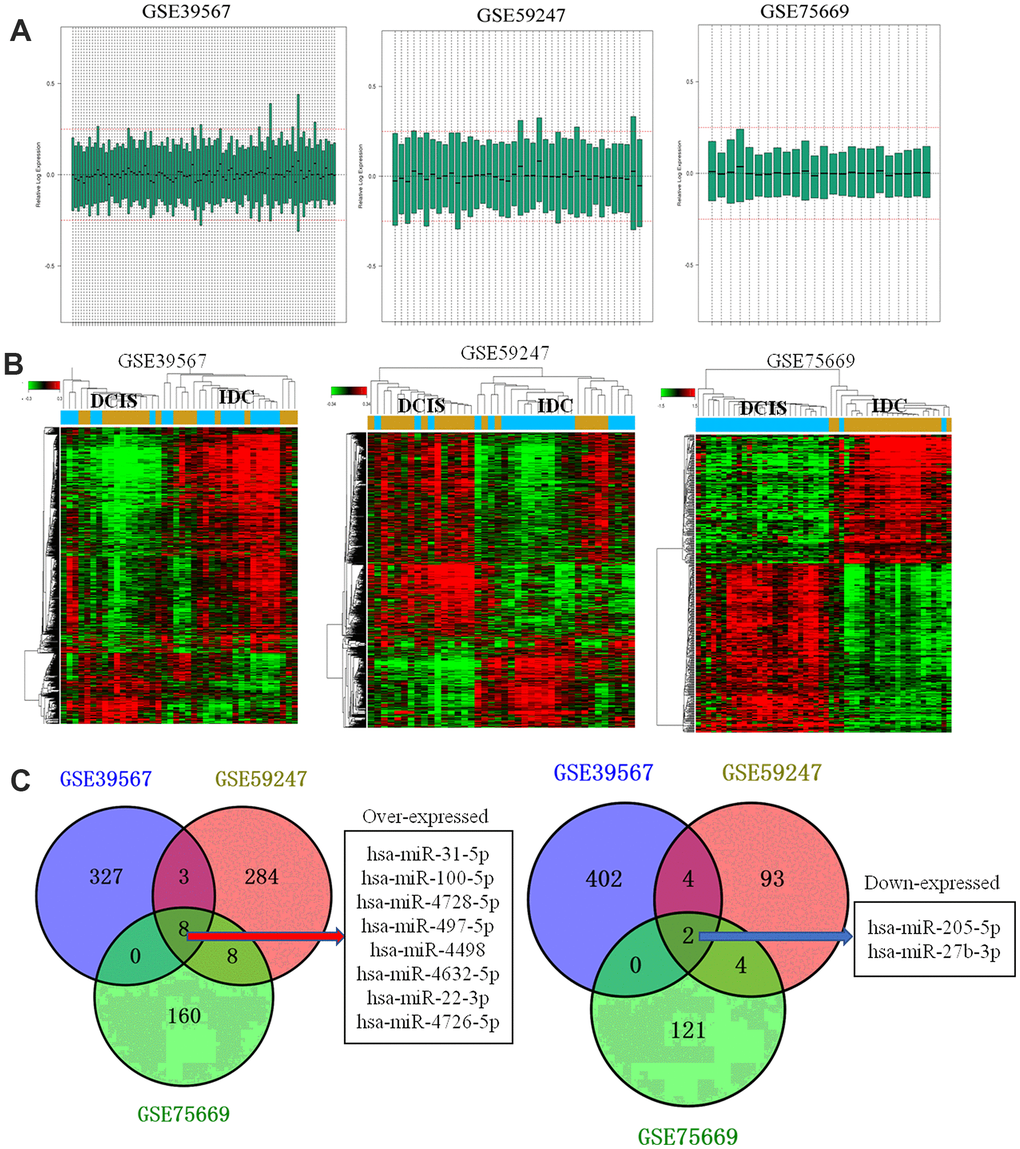 Using the miRwalk 2.0 database, as presented in Figure 1C, which 4234 interactions were predicted for the DEMs based on their target genes and downstream molecular pathways. Notably, 56 target genes for 11 DEMs were extracted to construct the regulatory network of differentially expressed miRNA and target genes (Figure 2). In this regulatory network, hsa-miR-205 was specifically and consistently expressed in two datasets and interacts with CLDN11 (claudin 11). Thus, miR-205 was predicted to interact with CLDN11. 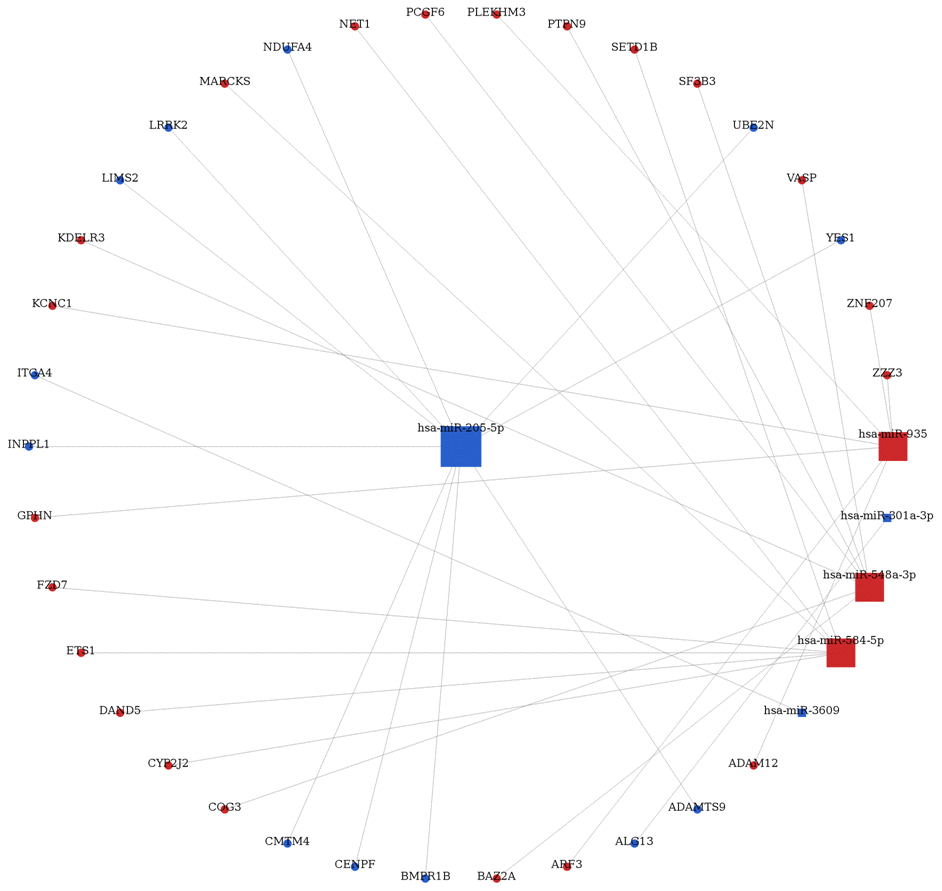 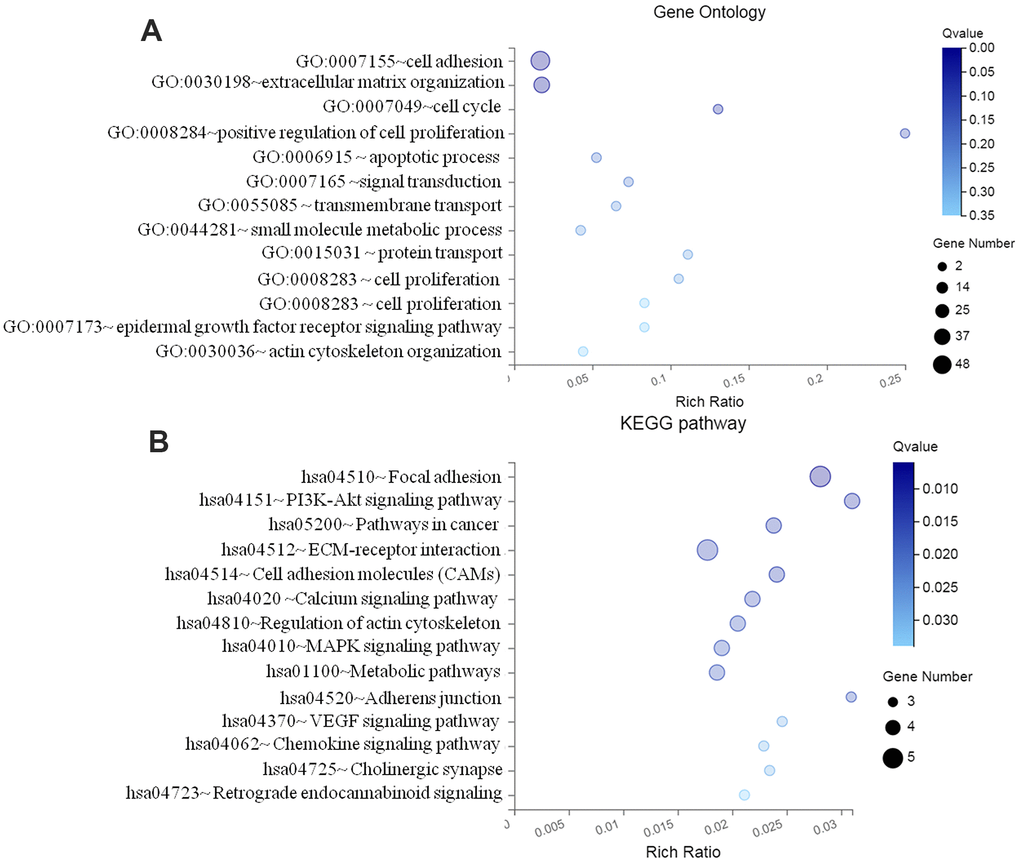 Previously, our bioinformatics analysis suggested that the low expression of miR-27b and miR-205 may involve in breast cancer development. Single factor regression analysis was performed to investigate whether they were associated with survival using the METABRIC data [32, 33]. Kaplan-Meier plotter database was used to assess their associations with the prognosis of breast cancer. The results suggested that downregulation of has-miR-27b was identified as a risk factor for poor prognosis, which was contrary to our expected results (Figure 4A). Moreover, miR-205 served as a protective factor for a favorable prognosis (Figure 4B). We further investigated the association of miR-205 with various subtypes of breast cancer. However, there was no correlation between the expression of miR-205 and the survival and prognosis in three negative breast cancer patients (Figure 4C). Furthermore, we found that over-expression of miR-455-5p independently predicted the poor prognosis in luminal A (ER+HER2-KI67-), luminal B, and ER-positive subtypes (Figure 4D–4F). 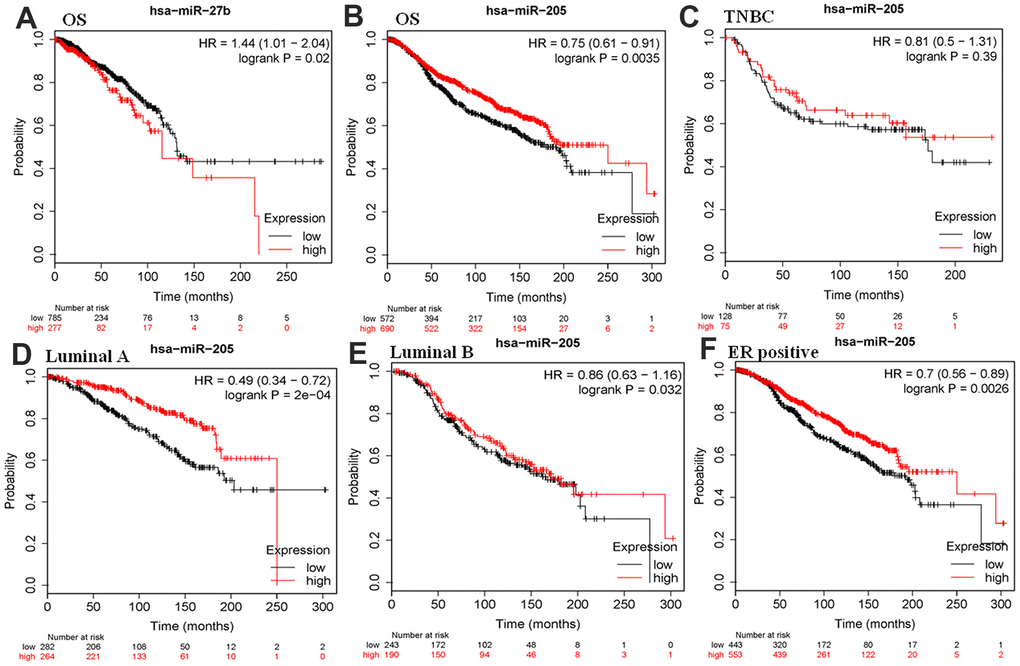 Low expression of miR-205 in breast cancer tissues and cells 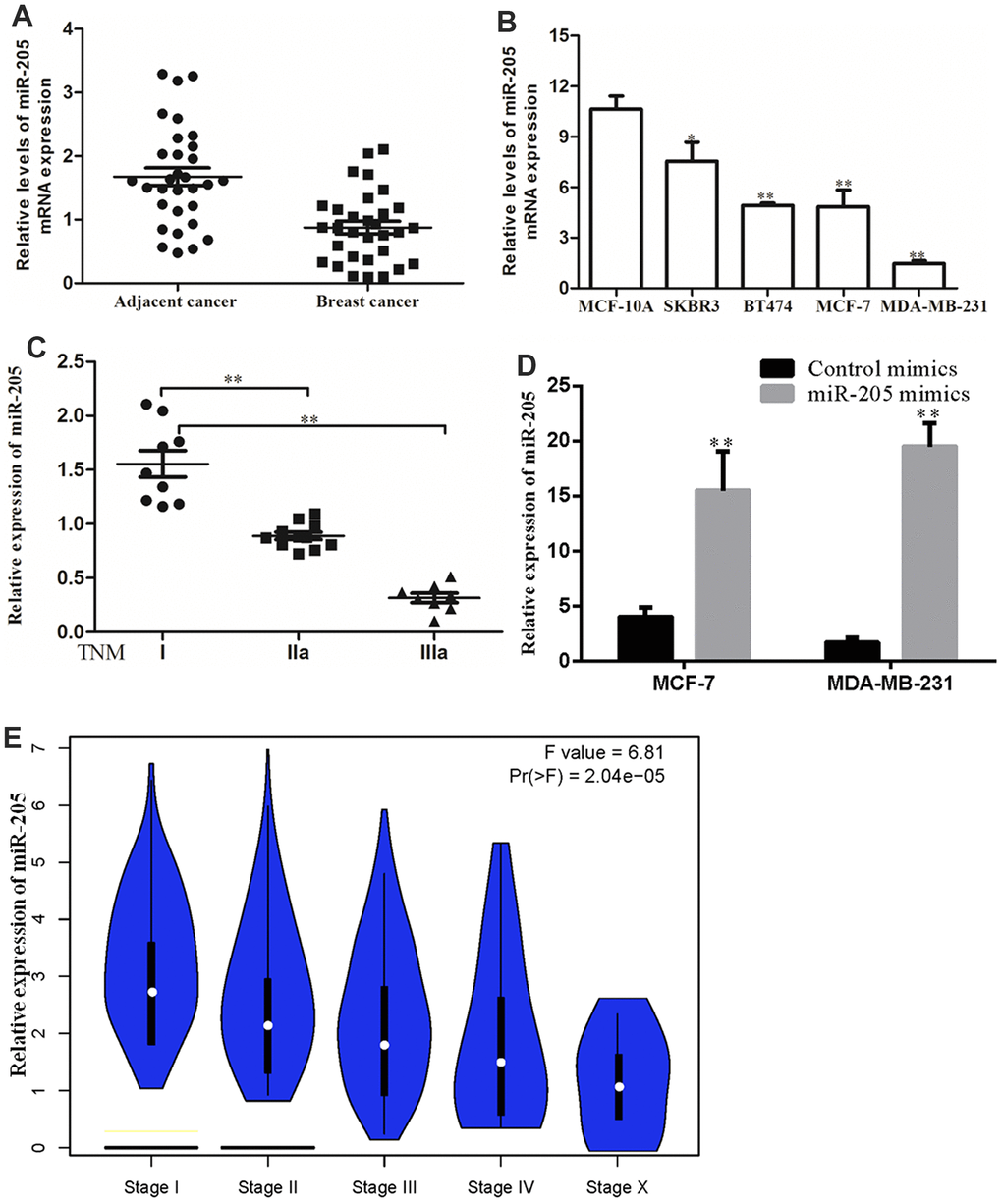 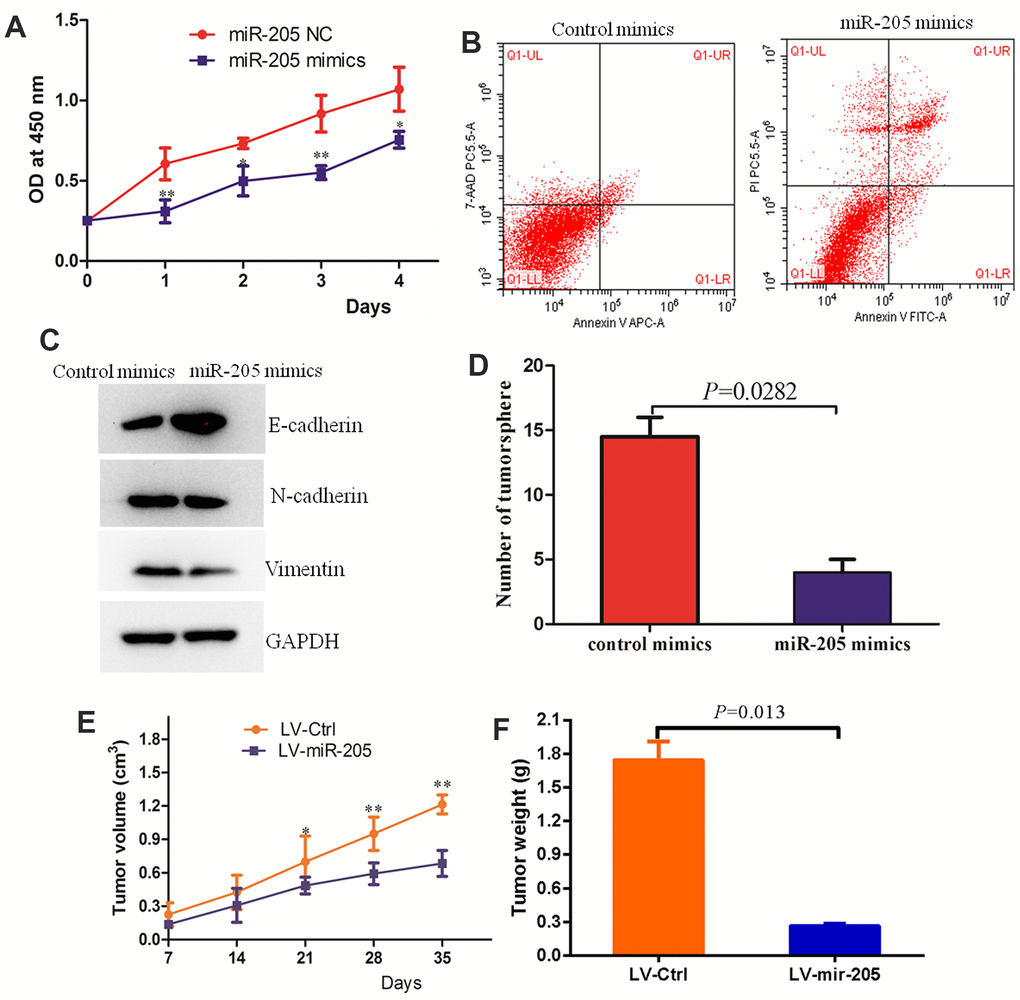 CLDN11 was a target of miR-205 in breast cancer cells

In order to explore the molecular biological mechanism of miR-205 downstream, miRDB online and Targetscan were used to predict the target genes regulated by miR-205. The data showed miR-205 has a high score in the scoring system, suggesting that its expression may be regulated by miR-205 (Figure 7A). Furthermore, fluorescence in situ hybridization (FISH) was performed to detect miR-205 distribution and subcellular fractionation, and identified miR-205 was predominantly localized in the cytoplasm in MDA-MB-231 cells (Supplementary Figure 2). To further confirm the regulatory ability of miR-205 on CLDN11, we co transfected MDA-MB-231 cells with the constructed fluorescent reporter plasmids PmirGLO-miR-205-CLDN11 WT and PmirGLO-miR-205-CLDN11 MUT, miR-205 mimics and mimics control respectively, and detected the activity of dual fluorescent reporter genes 48 hours later. The results showed that in MDA-MB-231 cells, miR-205 significantly inhibited the activity of wild-type CLDN11 3 '- UTR (P< 0.05), but did not inhibit the activity of mutant CLDN11 3'–UTR (Figure 7B, 7C). Together, these results indicated that CLDN11 could be the putative target of miR-205-5p. Our previous work demonstrated that CLDN11 may function as a prognostic biomarker and could serve as an important new therapeutic target for human breast cancer. 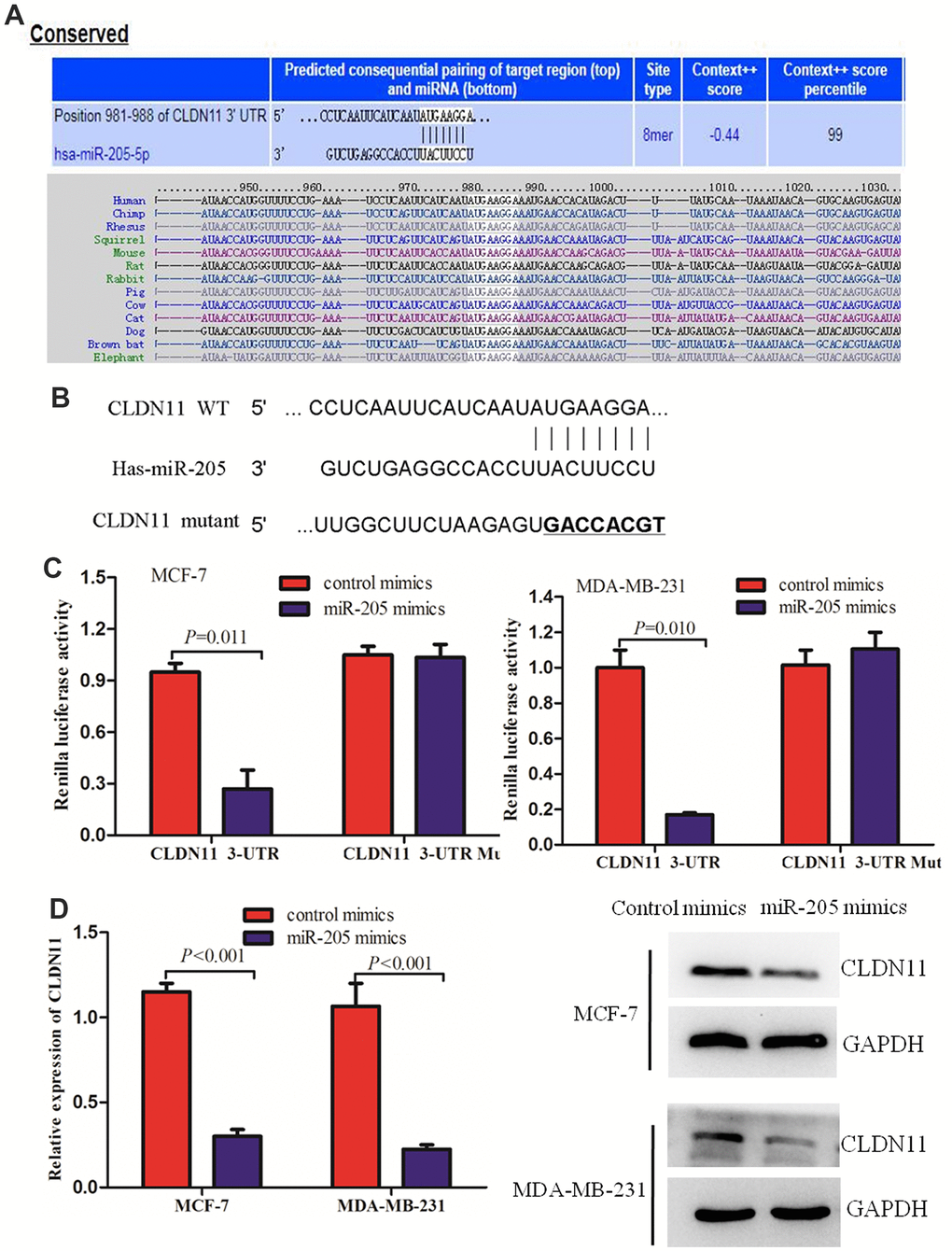 In China, the incidence rate of breast cancer is increasing year by year. More than 30 women are diagnosed with breast cancer every year. The incidence rate of breast cancer is especially high in the city of eastern coastal areas and economically developed cities. From the age of onset, the incidence rate of breast cancer has gradually increased since the age of 20, and reached a high value at 45~50 years old. With the popularity of new treatment strategies and methods, the global mortality of breast cancer is gradually decreasing. However, in China, especially in the vast rural areas, the declining trend of breast cancer mortality is not significant [34, 35]. miRNAs represent a class of small, 18- to 28-nucleotide-long, noncoding regulatory RNAs that function by binding to the 3’-UTR of target mRNAs, leading to degradation or translation inhibition of target mRNAs [19, 36]. Several deregulated miRNAs have been involved in a variety of cellular processes, including cell proliferation, differentiation, and apoptosis [20, 37, 38]. Numerous studies indicated that miRNAs could play a dual role as tumor suppressors or oncogenes in tumorigenicity, depending on tissue type and specific targets [39]. These pieces of evidence suggested that miRNAs may serve as preferred therapeutic targets for cancer therapy.

The limma package of R language was used to screen the differential miRNAs from the miRNA expression profile data. MiRNAs with log2fc absolute value greater than 1 and P < 0.05 were selected as miRNAs with significant differences for subsequent analysis. Mirtabase database (http://mirtarbase.cuhk.edu.cn/) mainly collects miRNA target genes verified by experiments, and the latest update is in June 2019. Using cluster profiler package in R, the predicted target genes were analyzed for KEGG and GO enrichment.

Total mRNA was extracted from tissues and cells using Eastep® Super Total RNA Extraction Kit (Promega, LS1040, MA, USA). According to the manufacturer's protocol, miRNAs were extracted from the cells using a miRcute miRNA isolation kit (FP401, TianGEN, Beijing, China). In brief, the cells were lysed with lysis buffer. Then, chloroform was added and shaken for 1 min. After resting the cells for 5 min at room temperature, the cell was centrifuged for 20 min (13400 g), and miRNA solution was collected, washed with 75%ethanol (E801077, Macklin) and centrifuged at 13400g for 15 min. The miRNA pellet was resuspended in RNase-free water. Then, PrimeScript™RT reagent Kit with gDNA Eraser (Takara, Dalian, China) was used to reverse-transcribe RNAs into cDNAs according to the manufacturer's instructions. Quantitative real-time PCR (qRT-PCR) was used to quantify the expression of miR-205, using Power SYBR Green PCR Master cDNA obtained on a 7500 real-time RT-PCR system. Sequences of sense and antisense primers used to detect CLDN11 were as follows: CLDN11 forward, 5'-CGGTGTGGCTAAGTACAGGC-3'; CLDN11 reverse, 5'-CGCAGTGTAGTAGAAACGGTTTT-3'; GAPDH and U6 RNA were used as the endogenous control. The relative gene expression levels were determined with the 2−ΔΔCT method.

Cell proliferation was assessed using the Cell Counting Kit (CCK-8) assay (Bosterbio, China). After the transfection of miR-205 mimics or control, 1.0×104 cells were seeded into 96-well plates containing cells 100 μl complete medium [40]. After incubation with 10 μ l CCK for 30 minutes at 37° C, the absorbance was measured at 450 nm using a microplate reader [41]. All experiments were independently performed in triplicate.

We thank the Department of Breast and Thyroid Surgery of The First Affiliated Hospital of Shaoxing University (Shaoxing People's Hospital) for providing breast cancer tissues.