Copyright: © 2021 Teng et al. This is an open access article distributed under the terms of the Creative Commons Attribution License (CC BY 3.0), which permits unrestricted use, distribution, and reproduction in any medium, provided the original author and source are credited.

Breast cancer, which originates in the epithelial tissue of the breast [1], is one of the most common malignant tumors in women, accounting for 30% of the cancers diagnosed in women. Continuous improvements in radical mastectomy and the application of various targeted drugs have markedly improved the survival rate and quality of life of patients with breast cancer, but tumor recurrence and metastasis are still the main prognostic factors [2]. Bone metastasis is the most common site of distant metastasis. Bone metastasis occurs in 65 to 75% of patients with metastatic and recurrent advanced breast cancer, and it is found in 27 to 50% of patients at initial diagnosis [3]. Bone metastasis often occurs in the thoracolumbar vertebrae, sacrum, and ribs [4]. Breast cancer patients with bone metastasis often experience bone-related events, such as pain in bones, pathological fractures, vertebral compression or deformation, spinal cord compression, and hypercalcemia, which seriously affect their quality of life [5].

Metastasis is the main cause of death in approximately 30% of patients with breast cancer, with a higher incidence of bone metastasis. Although breast cancer is peculiarly prone to bone metastasis, our understanding of the molecular mechanism of bone metastasis in breast cancer is still limited. Induced tumor-suppressing mesenchymal stem cells protect bones from metastasis in breast tumors [6] and the bone microenvironment and soluble factors participate in breast cancer bone metastasis. In this complex signaling network, interleukin is a key regulator, affecting the differentiation and function of osteocytes, as both cancer cells and osteocytes secrete interleukin and express the corresponding receptors [7]. MicroRNAs and long non-coding RNAs (lncRNAs), as non-coding RNAs that regulate the expression of target genes, also participate in bone metastasis [8]. It has been reported that miR-214 promotes osteolytic bone metastasis of breast cancer by targeting TRAF3. By detecting the expression profile of miRNAs produced by osteoclasts in human bone specimens, it was discovered that miR-214-3p is significantly upregulated in breast cancer patients with osteolytic bone metastasis. Moreover, miR-214-3p directly targets Traf3 mRNA to promote osteoclast activity and bone resorption activity [9]. In addition, the ROR1-HER3-lncRNA axis regulates the Hippo-YAP pathway to promote bone metastasis in breast cancer. NRG1 triggers HER3 phosphorylation, and then recruits the lncRNA MAYA and methylates MST1, activating YAP and its target genes, which eventually leads to the induction of osteoclast differentiation and bone resorption by cancer cells [10]. The lncRNA transcription factor homeobox B13 (HOXB13) has been identified as an upstream regulator of bone metastasis-related signals in prostate cancer. HOXB13 promotes the bone metastasis of metastatic prostate cancer by regulating the production of CCL2/CCR2 cytokines and integrin signals in an autocrine and paracrine manner [11].

Table 1. The Gene ontology annotation of the differentially expressed genes between the breast cancer bone metastasis samples and normal samples (GSE66206 from GEO).

We calculated Spearman correlation coefficients for the co-expression of PCGs and lncRNAs, which we corrected using the rank-sum test. We identified 747,870 PCG-lncRNA, PCG-PCG, and lncRNA-lncRNA interactions, 7,451 of which were differentially expressed PCG-lncRNA interactions (| r | ≥ 0.3, p < 0.05). We then visualized the network (Figure 1A) and analyzed the node degrees. Cytoscape analysis revealed that the degree of the network nodes ranged from 1 to 905. To identify the hub nodes in the network, we set the threshold to 20 and extracted all possible core driver genes. A total of 30 different core driver genes were identified (Figure 1B). We also identified regulatory interactions between 27 differentially expressed genes and 3 lncRNAs (RP11-317J19.1, CTD-2410N18.4, IDI2-AS1) (Figure 1C). We consulted the Human Protein Atlas Interactive Analysis to validate the expression of the core driver genes, including IDI1, BNIP3, IFRD1, COQ10B, and ZBTB10 (Figure 2), at the protein and RNA levels in breast cancer. Immunohistochemistry and RNA expression analysis indicated that IDI1, BNIP3, IFRD1, and ZBTB10 were significantly differentially expressed in cancer and healthy tissues. 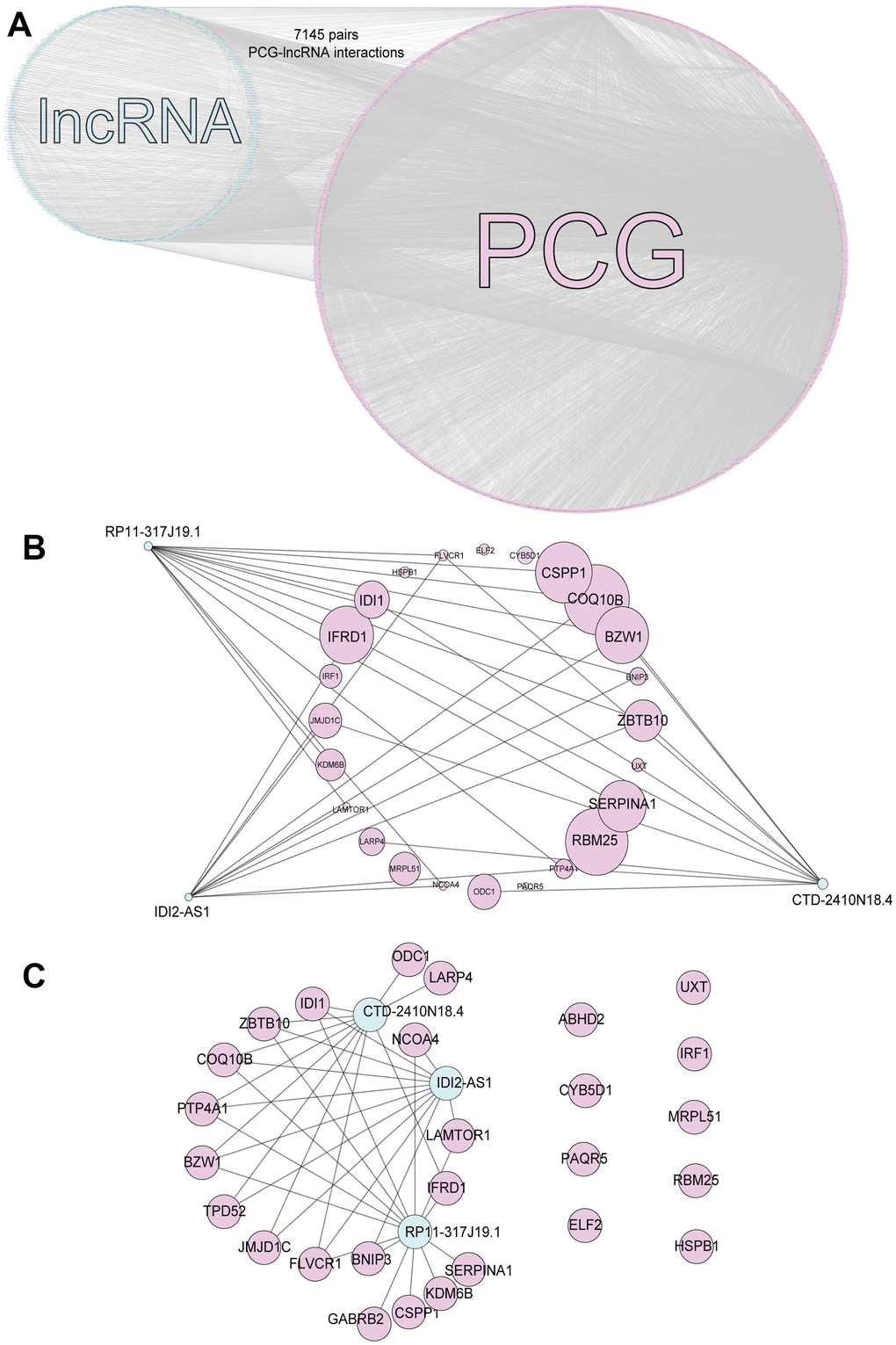 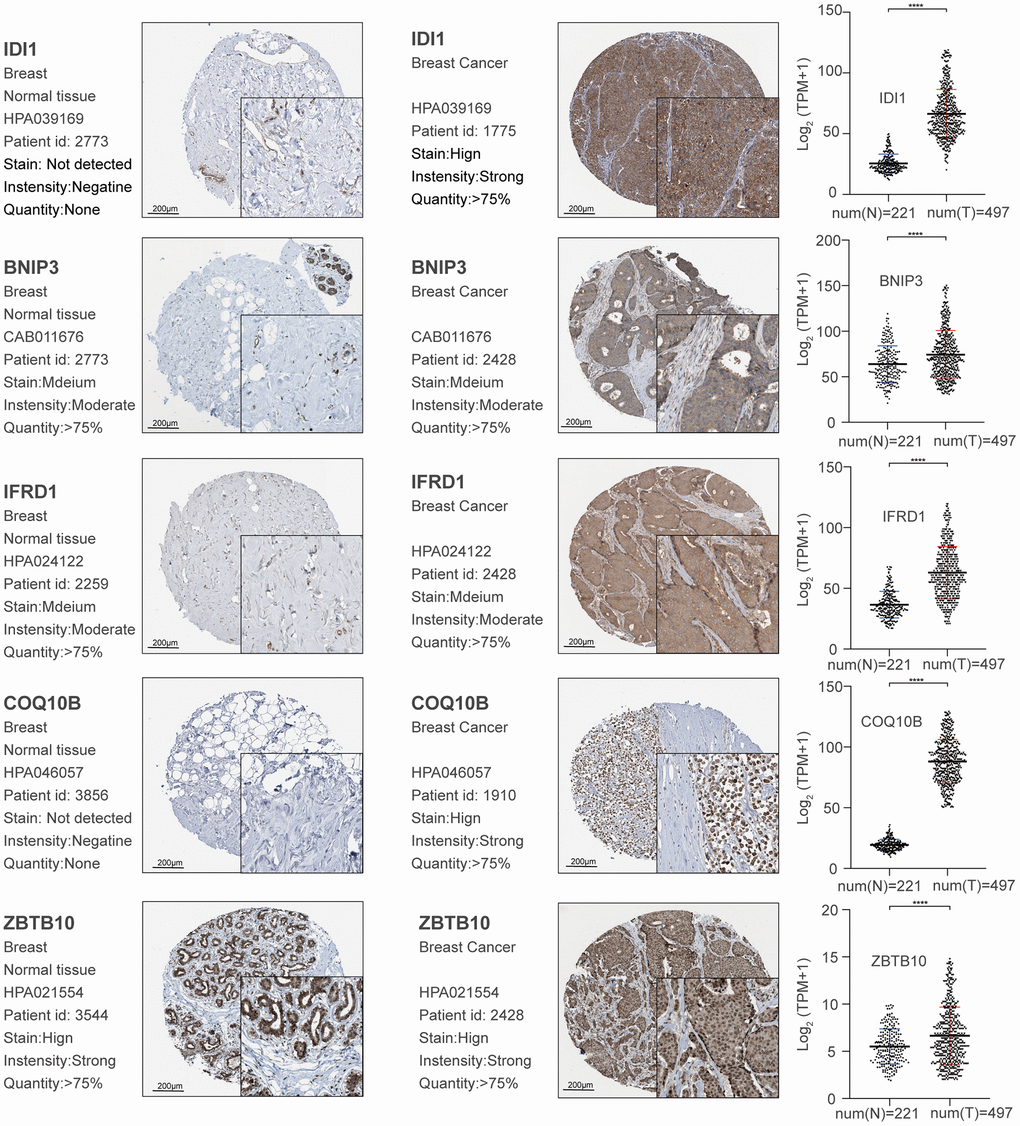 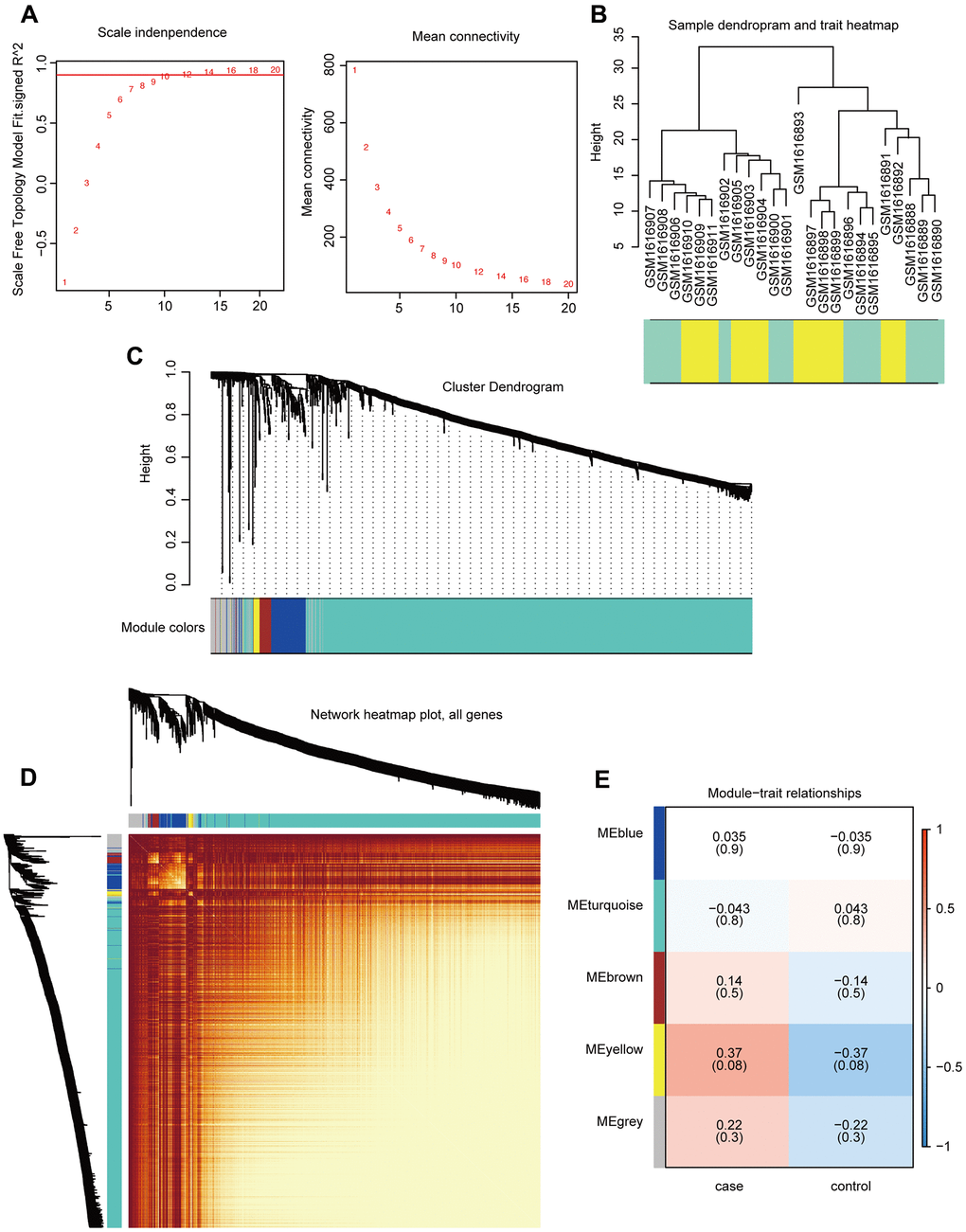 Table 2. The GO annotations of the genes in the yellow module. 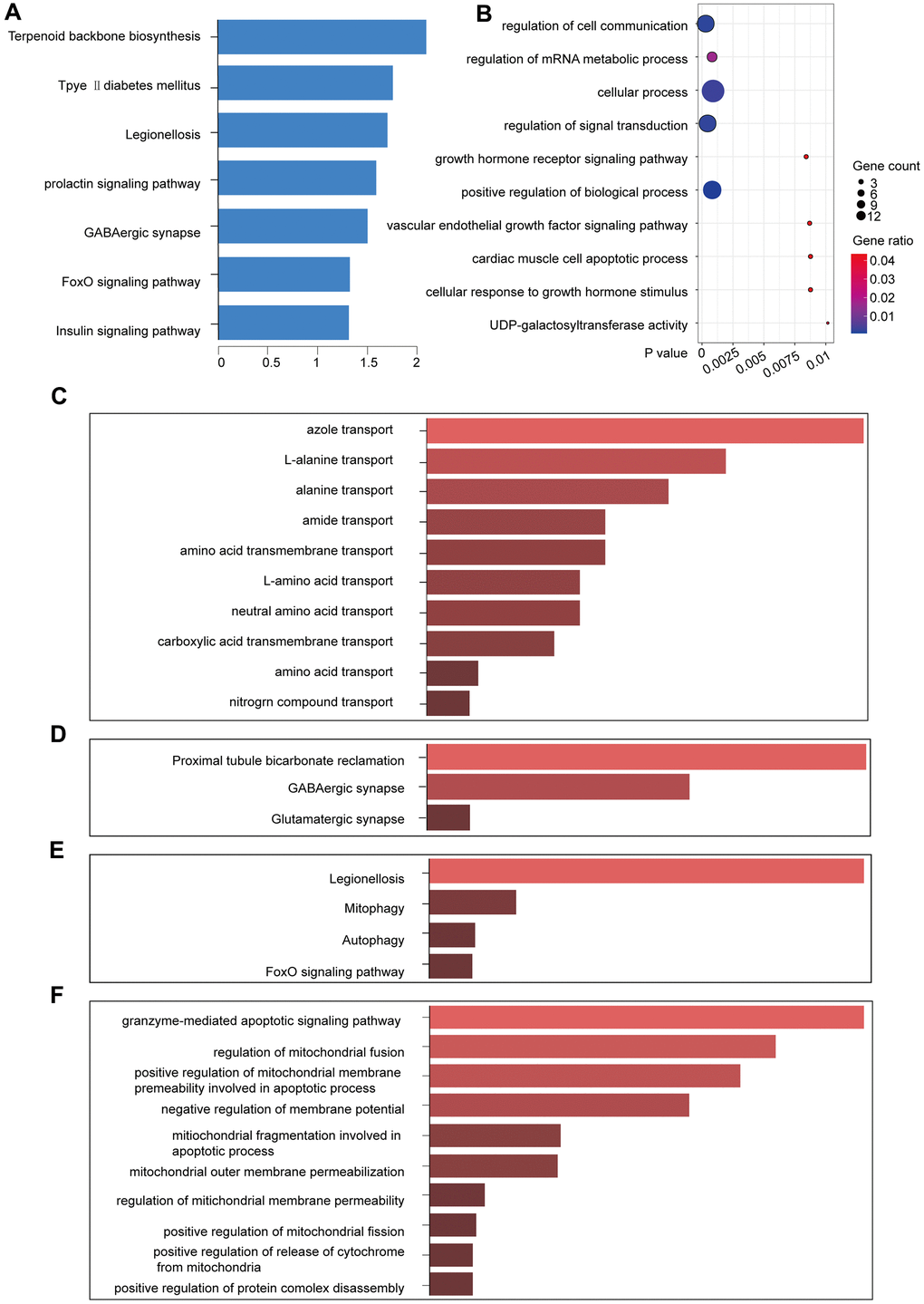 Enrichr was used to enrich the KEGG and GO functions of the five lncRNAs in the yellow module (p < 0.05). Some pathways that were enriched for the lncRNAs were related to amino acid transport (Figure 4C, 4D), including alanine transport (GO: 0015808, p = 0.00249) and amino acid transmembrane transport (GO: 0003333, p = 0.00747). We identified the GABAergic synapse (p = 0.02205) in the lncRNA-enriched KEGG pathway, which is closely related to breast cancer metastasis [14, 15]. Therefore, the yellow module was likely to be a pathogenic module.

We identified that the lncRNA RP11-317-J19.1 and PTP4A1 acted on BNIP3, which plays a key role in cell apoptosis and autophagy (Figure 4E, 4F) [16–19]. The gene-lncRNA interaction diagram revealed a subtle interaction between the five differentially expressed genes and differentially expressed lncRNAs in the yellow module (Figure 5A, 5B). To validate the gene-lncRNA interactions in the yellow module, we created gene correlation scatter plots for IDI2-AS1 and IDI1, IDI2-AS1 and PTP4A, IDI2-AS1 and BNIP3, PTP4A and IDI1, BNIP3 and IDI1, as well as PTP4A and BNIP3 (Figure 5C). The results revealed that the expression levels of BNIP3 and PTP4A were significantly positively correlated with that of IDI1 (p < 0.05), whereas those of BNIP3 and PTP4A were significantly negatively correlated with those of IDI2-AS1 (p < 0.05). Moreover, the Kaplan-–Meier plots showed that seven genes and two lncRNAs in the core driver gene network and co-expression yellow module were correlated with overall survival, including IDI1, PTP4A1, BNIP3, IFRD1, ZBTB10, DISP1, COQ10B, IDI2-AS1, and SLC38A3 (Figure 6A–6I). 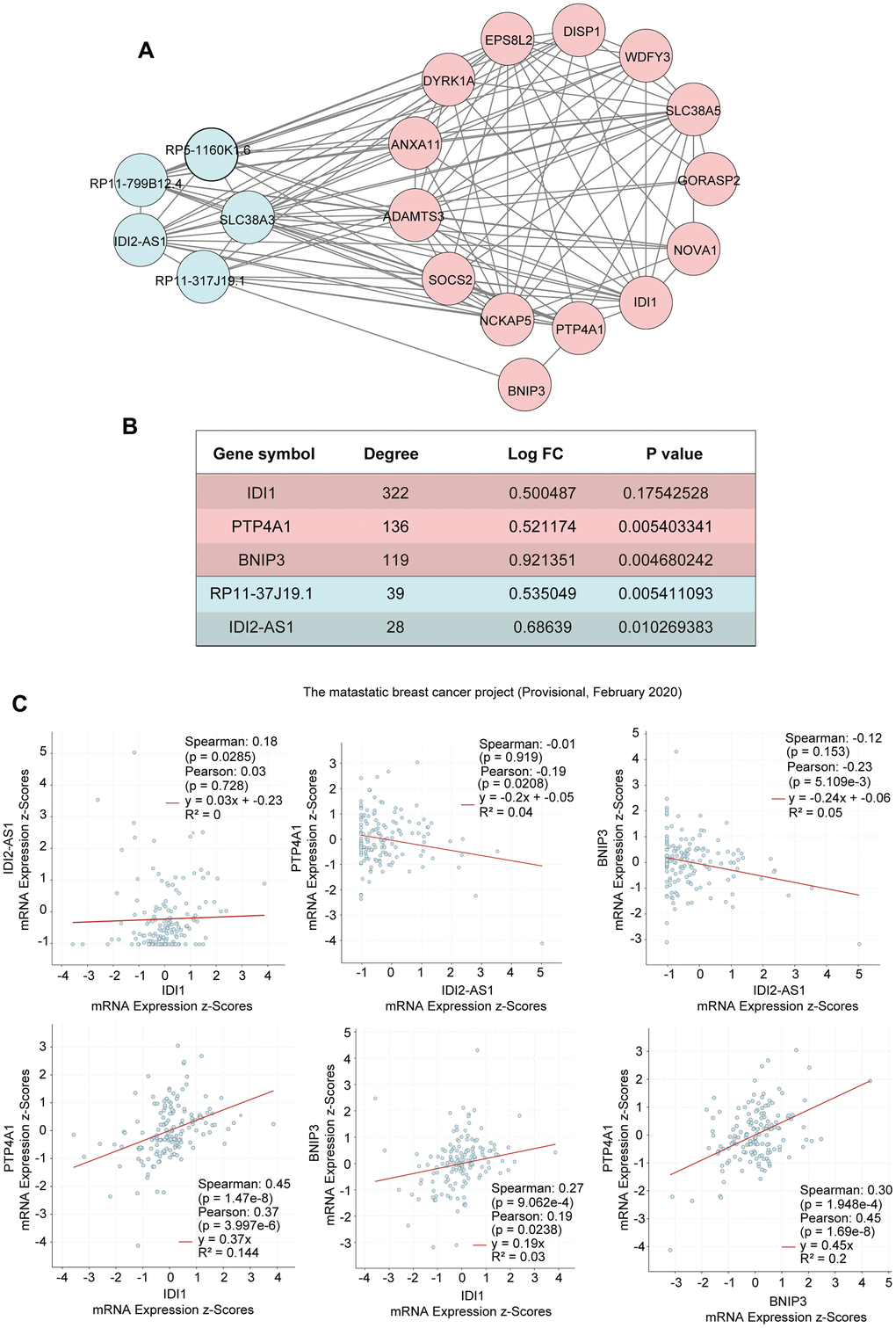 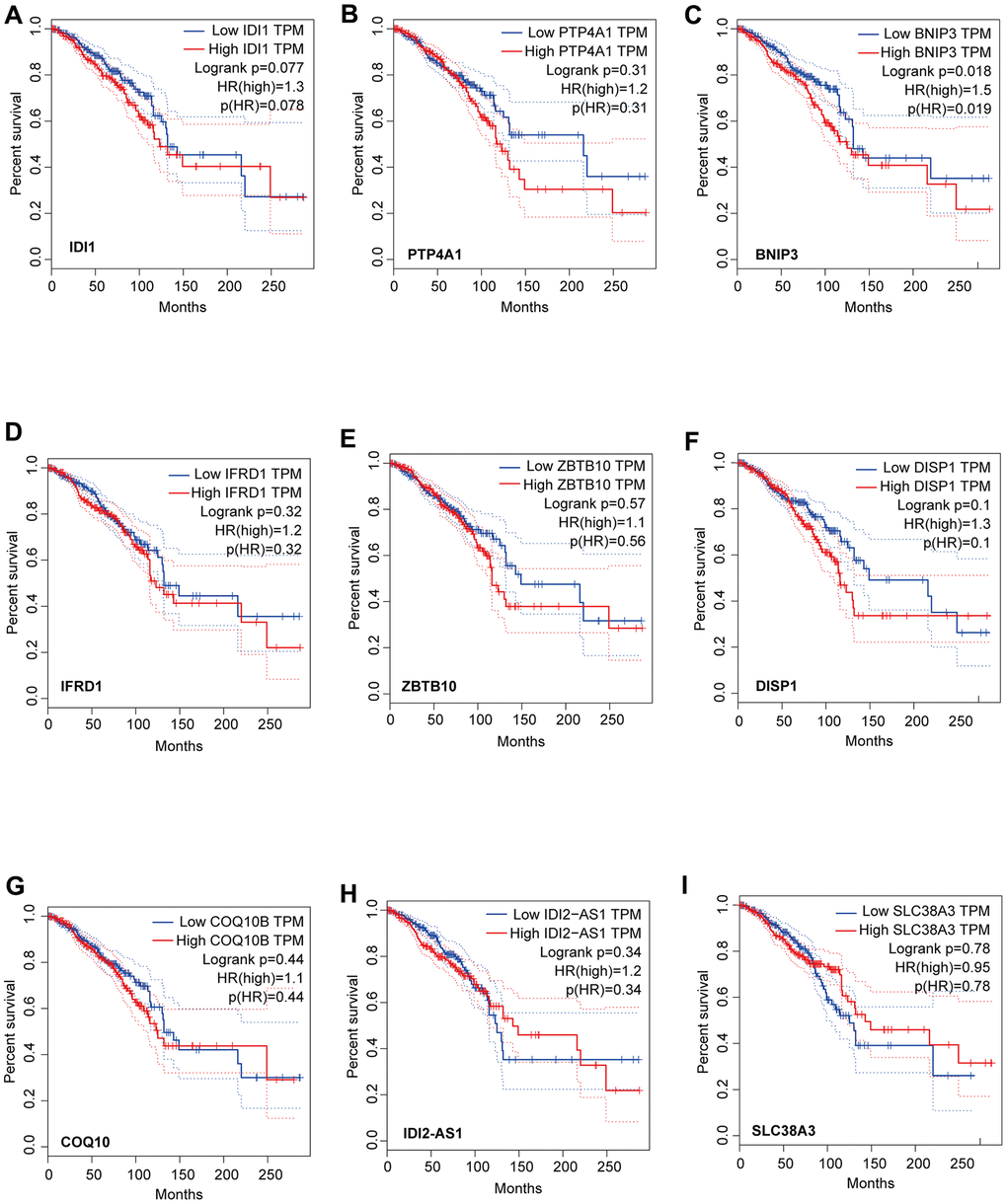 Figure 6. Analysis of overall survival based on the expression of the seven genes and two lncRNAs in the core driver gene network. Survival was measured using Kaplan-Meier analysis based on the expression of IDI1 (A), PTP4A1 (B), BNIP3 (C), IFRD1 (D), ZBTB10 (E), DISP1 (F), COQ10B (G), IDI2-AS1 (H), and SLC38A3 (I). The X-axis displays the survival time (Months), and the y-axis displays the percentage survival.

Through functional analysis of the lncRNA RP11-317-J19.1, PTP4A1, and BNIP3, we found that the interaction pairs formed by these genes participate in programmed cell death via apoptosis and autophagy [16–19]. The protein encoded by PTP4A1 is a cell-signaling molecule with a regulatory role in various processes, such as cell proliferation and migration; therefore, the dysregulation of this protein may also be involved in metastasis [23–27]. BNIP3 encodes a mitochondrial protein that contains a BH3 domain and functions as a pro-apoptotic factor. BNIP3 silencing may be mediated by the lncRNA RP11-317-J19.1, allowing the protein encoded by PTP4A1 to function normally, which may induce the uncontrolled proliferation and migration of breast cancer cells. PTP4A1 is highly expressed in several cancer types, and the overexpression of PTP4A1, which is associated with aggressive tumor characteristics, may be regulated by the PI3K/AKT pathway [28]. PTP4A1 expression is regulated by microRNAs that control cellular processes in breast cancer, whereas miR-601 targets PTP4A1 to inhibit breast cancer growth and invasion [24]. The function of BNIP3 is similar to that of PTP4A1, which includes the inhibition of cancer aggression. PTP4A1 can be modulated by the lncRNAs HULC and RP4 in response to cellular injury [29, 30]. These findings suggest that RP11-317-J19.1, PTP4A1, and BNIP3 may play crucial roles in restraining cancer aggressiveness; thus, they serve as strong predictors of breast cancer bone metastasis.

Preparation of the data for probe re-annotation

We downloaded the V19 version of the human protein-coding gene reference transcript sequence and lncRNA reference genomic sequence data from the GENCODE database. The probe sequences of the Affymetrix chip GPL6246 platform used for analyzing the GSE66206 dataset were downloaded from GEO.

First, we used a library comprising the human protein-coding gene (PCG) reference transcript sequence data and lncRNA reference genome sequence data in fasta format from GENCODE to build our database. Then, based on the constructed transcription and lncRNA libraries, we re-annotated the probe sequences of GSE66206 via the blast algorithm in preparation for the construction of mRNA and lncRNA expression profiles. During re-annotation, we ensured that all the remaining probes met the following conditions: 1) The probe sequence fell entirely within the transcript sequence of the PCG or lncRNA and matched exactly; 2) if a probe sequence aligned with the transcripts of multiple PCGs or lncRNAs, it was filtered out; 3) each PCG or lncRNA was supported by at least two probe sequences.

The Spearman correlation coefficient was calculated from the gene and lncRNA expression data of the breast cancer bone metastasis and normal samples, and a rank-sum test was performed to construct a differentially expressed lncRNA-mRNA interaction network for breast cancer bone metastasis (coefficient | r | ≥ 0.3, p < 0.05 determined by rank-sum test). We visualized the network and analyzed the node degrees to identify the core driving genes.

Co-expression analysis of all genes and lncRNAs associated with breast cancer bone metastasis was performed using the weighted correlation network analysis (WGCNA) R package. We used the WGCNA algorithm to mine the co-expressed gene modules, and then analyzed the associations between these modules and the sample phenotype. The identified breast cancer metastasis-related modules were displayed in the network using Cytoscape.

Functions and associated pathways of the breast cancer bone metastasis-related and differentially expressed genes, as well as lncRNAs, were enriched using KOBAS and Enrichr, respectively, via gene ontology (GO) and Kyoto Encyclopedia of Genes and Genomes (KEGG) analyses.

All authors contributed to the work presented in this paper. XT and DWF designed the research and supervised the project. HW, TSY, HFY and PW performed statistical analysis of data. WSL and ZQC provided support e visualization and analysis support. XT wrote the manuscript. All authors read and approved the final manuscript.