Copyright: © 2021 Alcaraz et al. This is an open access article distributed under the terms of the Creative Commons Attribution License (CC BY 3.0), which permits unrestricted use, distribution, and reproduction in any medium, provided the original author and source are credited.

Background: To date, available data on premature aging in young HIV-infected adults are scarce and no reports offer comprehensive assessment of telomere shortening (TS) in relation to subclinical atherosclerosis (SCA). In this study, we investigate if telomere shortening and immune activation markers are associated with SCA, which is one of the main degenerative diseases in young HIV-infected adults.

Telomeres are regions at each end of chromosomes which protects them from deterioration or from fusion with neighboring chromosomes [1]. Mammalian telomeres are composed of very long arrays (2–100 kb) of TTAGGG repeats that are maintained by telomerase. Telomere shortening (TS) largely reflects the replicative histories of stem cells and progenitor cells on top of the somatic cells [2]. Without the presence of telomeres, the 3-'OH end of the DNA would be unprotected and would be susceptible to being damaged during cell replication. With aging, these telomeres are shortened until the genetic material is exposed, causing cellular senescence associated with a dangerous loss of DNA [3].

Shortening of the leukocyte telomere length is observed long before the onset of carotid lesions and can predicts its progression. Besides, it is associated with cardiovascular disease (CVD) and the severity of atherosclerotic plaques in coronary and carotid arteries [4]. Carotid intima-media thickness (cIMT) has been used to estimate atherosclerotic damage. cIMT is a valid measurement of subclinical atherosclerosis (SCA), since it has been consistently related to future cardiovascular events in population studies [5]. cIMIT also correlates with the extension of coronary atherosclerosis [5, 6].

Chronic inflammation can accelerate telomere dysfunction and cell senescence in HIV-infected population [7]. With aging, cardiovascular diseases in HIV-infected patients become especially problematic. Emerging data indicate that, even under a strict control of the traditional cardiovascular risk factors, HIV-infection increases rates of atherosclerosis-related disease, mostly due to chronic arterial inflammation and the injury induced by chronic immune response, which, in turn, promotes dysfunction of the endothelium, atherosclerosis [8], and thrombosis. In fact, endothelial injury and dysfunction have been proposed as plausible links between HIV infection [9] and atherosclerosis. Besides, despite effective viral suppression, immune activation leads to premature onset of immune-senescence, which could be related to the earlier aging of HIV-infected patients [8].

Several immunological biomarkers have been associated with the immune senescence related with aging, such as TS, the accumulation of CD28 negative T-cells (CD28null), and the increase in the expression of activation markers, i.e. CD38, HLA-DR [10]. Chronic viral infections like HIV are considered major contributors to immune senescence and chronic inflammatory state observed in elderly HIV-infected patients [11].

To date, available data on premature aging in young HIV-infected adults are limited [12] and no reports offer a comprehensive assessment of TS, a key molecular marker of biological aging, in relation to SCA and/or activation/senescent profiles. In this paper, we investigate if telomere shortening and immune activation markers are associated with SCA, which is one of the main degenerative diseases observed in young HIV-infected adults.

This descriptive cross-sectional study was performed in a sample of 149 HIV-infected patients on stable antiretroviral therapy (ART) in Reina Sofía University Hospital in Murcia, Spain. 91% of our patients had undetectable HIV viral load during the study. Patients over the age of 18 were recruited if documented HIV infection. The average time of our patients with HIV infection was 13 years. Concomitant pathologies or treatments were not exclusion criteria. The study conformed principles of the Declaration of Helsinki and the Good Clinical Practice Guidelines, and was approved by the local ethics committee (“Comité Etico de Investigación Clínica del Hospital Universitario Reina Sofía de Murcia”). All patients gave their written consent to participate in the study [13].

Carotid measurement was performed during the baseline visit. For the determination of carotid intima-media thickness (cIMT), B-mode high-resolution ultrasound was used following a standard procedure previously described [12, 13]. All measurements were performed by the same researcher, who was unaware of the group to which the patients belonged. SCA was considered if IMT was higher than 0.8 mm in common carotid, higher than 1.0 mm in bulb carotid, or there was a plaque in the carotid artery [13, 14].

The whole blood DNA concentrations were confirmed to lie well within the linear range of the standard curves. Relative TL was expressed as the average T/S ratio of triplicates [17]. As validation controls of the technique, we use DNA from the elderly with age > 88.

TS was considered if the value of TL was less than 200. We established 200 as a cut-off point, since it was the median value obtained in our sample.

EDTA anticoagulated peripheral blood cells were labeled following a lyse/wash protocol with an 8-color/9-monoclonal antibody (mAb). In this study the strategy previously described by Bernal et al. was used to label, acquire and analyze the blood cells in flow cytometry [19].

A descriptive analysis of patients’ characteristics was conducted using frequency tables for categorical variables and mean and SD for continuous variables. Differences in categorical variables between patients with and without TS were assessed through the X2 test or the Fisher test, and t student tests for continuous variables. Binary logistic regression was used to evaluate the independent variable association with TS. Multivariable models were adjusted for age, transmission group (homosexual/bisexual, injecting drug use, heterosexual, and other/unknown), Framingham risk score, and variables that were significant in the univariate analysis. Wald tests were used to derive P values. Significance was placed at P<0.05. All statistical analyses were performed using SPSS package version 24 [13]. The variables collinearity were analyzed, and those that were collinear were not included. 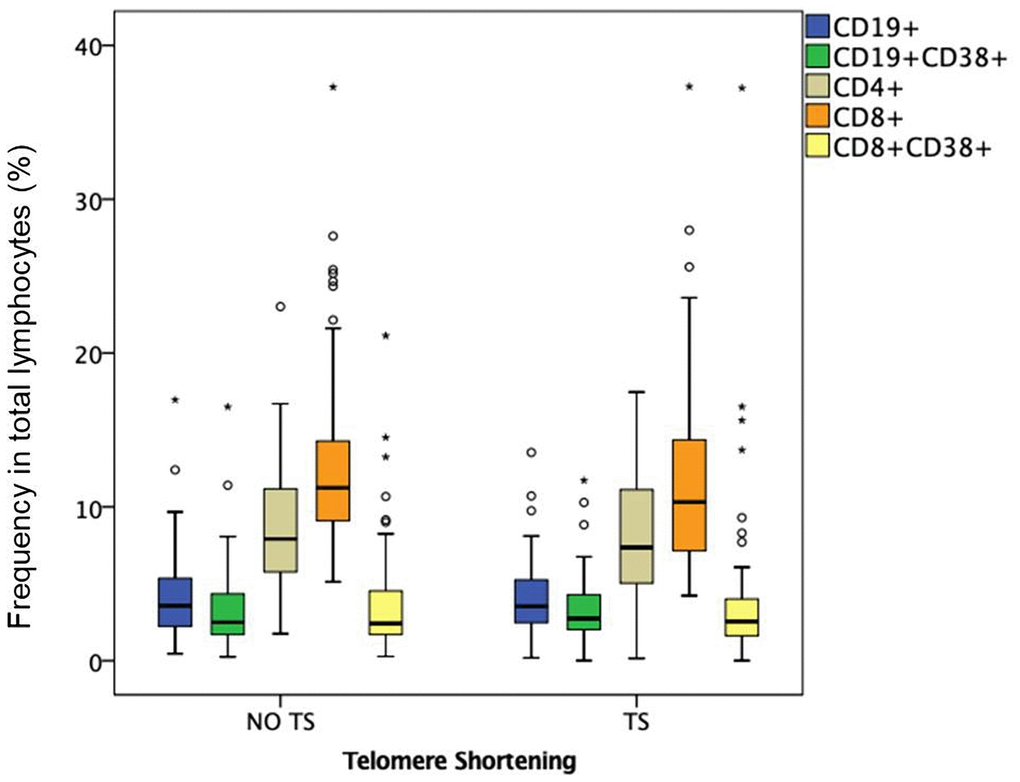 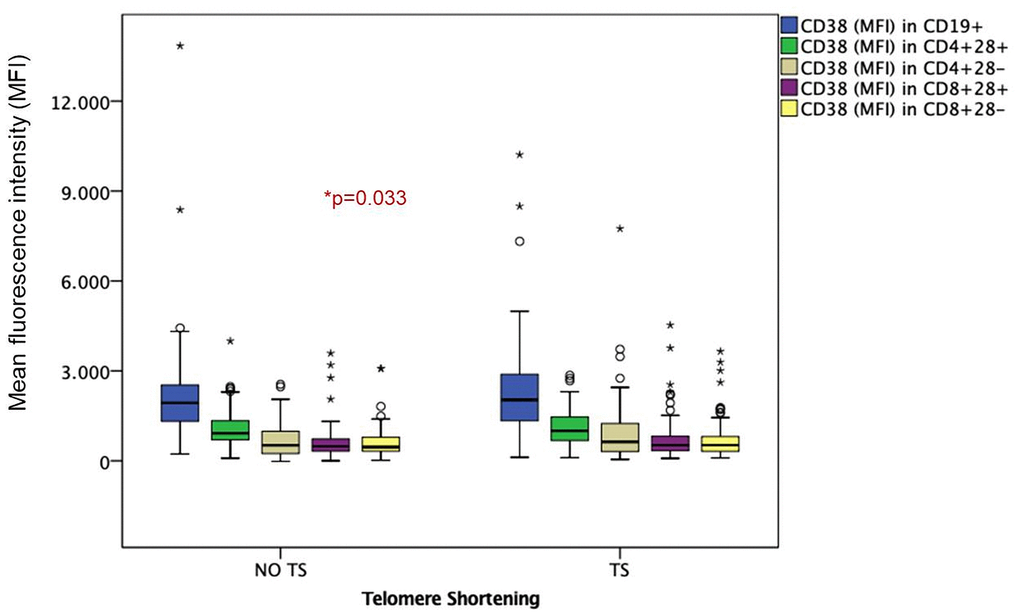 Although ART drastically reduces immune activation, HIV-1-infected individuals show signs of persistent immune activation and inflammation [20]. In fact, HIV-1 infected patients on ART with suppressed viraemia have higher rates of age-associated diseases and shorter life expectancy, compared to uninfected persons of the same age [21, 22]. Our study reveals that in young adults immune-activation is related to telomere shortening, and all together could contribute to the increased co-morbidity described in HIV disease. As previously described in adults and older children [23, 24], HIV infection is associated with increased levels of activated CD8+ effector T cells, which lead to the accumulation of cells with a senescent phenotype (CD28-). It is well known that a major driver of cellular senescence is the telomere shortening [25]. These data are consistent with a previous report showing that high percentage of CD8+CD28- correlates with shorter telomeres [26].

Data described in this manuscript suggests that young HIV-infected adults accumulate activated CD8+CD38+ T cells together with senescent T cells (CD28-). The finding that activated and depleted CD8 cells are negatively correlated with telomere length supports the view that sustained immune activation and cell depletion are closely related to accelerated biological aging and increased comorbidities in young HIV-infected patients. In fact, in our study, telomere length is inversely associated with increased cIMT and, therefore, with subclinical atherosclerosis.

Although it has been described that some ARTs such as those using nucleoside-like reverse transcriptase inhibitors are linked to a more pronounced telomere shortening, possibly by inducing the inhibition of the telomerase enzyme responsible for maintaining telomere length [20], our results could not detect any association between the type of ART and the telomere length. However, importantly, it has been clearly demonstrated that shortened telomeres are associated to excessive cellular replication occurring as a consequence of the chronic immune activation triggered by latent HIV infection [20].

In line with systematic reviews and meta-analysis describing that HIV-infected individuals have significantly higher values of cIMT than uninfected ones [27], our data show that forty nine percent of patients with TS had increased cIMT in the left carotid bulb, the left common carotid artery, and the right common carotid artery, in addition to higher probability of carotid plaque and a higher score on the Framingham scale than those without TS. In fact, in our study, TS was an independent predictor of SCA, measured by cIMT, in young HIV-infected patients in stable ART. These results are the basis to explain the higher prevalence of atherosclerosis associated to the chronic inflammation induced by HIV infection and the use of ART, and make up the best scenario to boost TS.

We used qPCR to assay the telomere length, as it is supposed to be quicker, more sensitive, and less technical than other methods, so it allows for a higher throughput [28]. This higher throughput also serves to reduce the costs [28]. Moreover, the qPCR method is associated with less stringent requirements on DNA amount and quality. However, the qPCR only determines the relative mean telomere length. Furthermore, the data obtained using this technique are not presented in absolute values of kilobase pairs (kbp) [28].

Shortened telomeres in vascular endothelium are thought to promote cellular senescence, which feeds the inflammatory cycle, leading to plaque deposition [29, 30, 8]. Thus, higher level of inflammation could cause endothelial dysfunction, which is seen as the link between infection and atherosclerosis [31, 32]. The internal mammary artery has longer telomeres than other arteries and is protected from atherosclerosis. Therefore, increased telomerase activity protects endothelium from senescence, suggesting that telomeres play a protective role in atherosclerosis. In this line, it has been shown that shortened telomeres in ageing cardiomyocytes leads to cell loss by increased cellular senescence and apoptosis, and limits proliferative potential of cardiac progenitors, contributing to heart failure [29, 30, 33, 8, 10].

Altogether, our data support a scenario in which viremia sustained chronic inflammation drives to a high turnover of naïve immune cells, which rapidly differentiate and get exhausted, resulting in the accumulation of senescent cells with shortened telomeres. Senescent cells, in turn, secrete pro-inflammatory factors, which would reinforce inflammation creating a positive feedback loop. As expected, in our series, HIV-infected patients with TS had higher levels of activation markers (CD38 expression) on T and B cells, which agree with other studies describing the association of increased immune activation (higher percentage of CD4+CD38+ T cells) with shorter telomeres in HIV-1-infected patients on ART. In line with previous studies [34], our data suggest that chronic inflammation associated with HIV-1 infection drives to an excessive activation and proliferation of T cells, which in turn leads to telomere shortening and ultimately to immunosenescence. As a consequence, young HIV-infected adults with TS would be at higher risk of presenting comorbidities and non-AIDS events.

Our study has some limitations that must be taken into account, for example, its cross-sectional nature that means that the relationships found can not be classified as causal. On the other hand, there are factors that were not evaluated in this study, such as oxidative stress, which are more frequent in HIV infected patients and have been associated with persistent chronic inflammation, early aging and greater telomere shortening [35, 36]. Nor have we evaluated antioxidant treatment. However, we observed that there is an association between cell activation markers with telomeric shortening, which could help to better understand the early aging of this population.

In conclusion, young HIV-infected adults exhibit premature biological ageing with higher SCA, shortened telomeres, and increased T-cell immune activation and senescence, compromising their immune surveillance and increasing the risk of age-related diseases and non-AIDS events. Nonetheless, new studies will be necessary to investigate the mechanisms involved, which could reveal potential targets to improve the quality of life and survival of these patients.

This study has been funded by Instituto de Salud Carlos III through the project “PI17/01545” (Co-funded by European Regional Development Fund/European Social Fund) “Investing in your future.”