Aortic aneurysms are associated with aortic dissection and rupture. There is currently no effective treatment to prevent or cure aortic aneurysms. At present, both the pathogenesis and pathophysiology of ascending aortic aneurysms are not entirely clear. Vascular smooth muscle cells (VSMCs) have been recognized as the most important factor in the development of ascending aortic aneurysms. Aortic aneurysms can occur due to loss of VSMCs in the media layer of the aortic wall, leading to progressive aortic dilation [1–3]. We observed an interesting phenomenon in clinical work where the aneurysm or dissection remodeling varies from site to site, which may be due to differences in the mechanical stimuli to which different sites are exposed.

Aortic walls are subjected to various mechanical stimuli from the bloodstream, such as shear and mechanical stretch. Stretch sensing is generally known as an integrin-mediated pathway, which is coupled to cell contractile activity, and thus shares many mechano-transduction pathways with the rigidity sensing process in translating mechanical stimuli into intracellular biochemical signals [4–6]. The relationship between mechanical stretch and cell proliferation/apoptosis has been extensively studied [7–11]. VMSCs experience mechanical stimuli during growth and differentiation and transduce these stimuli into biochemical signals that in turn regulate cell responses to the imposed forces. The effect of cyclic stretch is recognized as an important regulator of the development and pathological abnormalities of aortic walls. Under physiological conditions, the aorta undergoes approximately 10% circumferential stretch during systole. This number increases to approximately 20% under conditions of hypertension. The rate of apoptosis of VSMCs under 20% circumferential stretch is higher than that under 10% stimulation; how VSMCs change under 10–20% stretch remains uncertain [12].

The Hippo pathway plays an important role in the cell’s reaction to mechanical stretch [13–17]. It was first defined in Drosophila by genetic mosaic screening following identification of a loss-of-function mutation of Hippo that led to a strong overgrowth phenotype [18]. As the major downstream effector of the Hippo pathway, YAP/TAZ mediates major physiological functions therein. MST1/2, Sav1, LATS1/2, and Mob1 constitute a kinase cascade that eventually phosphorylates YAP/TAZ and promotes its binding with 14-3-3 and cytoplasmic retention [19, 20]. YAP/TAZ has been identified as the sensor and mediator of mechanical cues arising according to the rigidity of the extracellular matrix, cell geometry, cell density, and the status of the actin cytoskeleton [14, 15, 21, 22]. Among them, YAP, as an important factor in mechanical signal transduction, controls cell survival and proliferation by combining with DNA-binding transcription factors to induce gene expression (Hippo pathway in organ size control, tissue homeostasis, and cancer). YAP inhibits the expression of smooth muscle differentiation genes, and at the same time promotes smooth muscle proliferation and migration in vitro and in vivo, and plays a novel comprehensive role in smooth muscle phenotype regulation (The induction of yes-associated protein expression after arterial injury is crucial for smooth muscle phenotypic modulation and neointima formation). Therefore, these evidences indicate that YAP is a key molecule in the regulation of VSMC phenotype. Rho-ROCK is the signaling pathway upstream of Hippo. The Rho-ROCK signaling pathway inhibits Hippo pathway activity [23, 24]. Rho-ROCK is affected by mechanical stress and regulates the proliferation of VSMCs. However, the influence of different intensities of mechanical stretch on the Hippo pathway, and the role of Rho-ROCK in this mechanism, remain unclear.

Sprague-Dawley rats (male, 200-250 g) were purchased from the animal experimental center of Academy of Military Medical Sciences of PLA (Beijing, China) and housed under the specific pathogen-free (SPF) conditions (temperature, 23 ± 2° C; relative humidity, 65% ± 5%; 12h / 12h light / dark cycle, 07:00-19:00) with free access to food and water for 3 days. SD rats were anesthetized with isoflurane, and then VSMCs were isolated from thoracic aorta using the explanting technique [25]. and cultured in Dulbecco’s modified Eagle’s medium (DMEM; Gibco, Grand Island, NY, USA) containing 10% fetal bovine serum (FBS; Gibco, Grand Island, NY, USA), 100 U/mL penicillin, and 100 μg/mL streptomycin at 37° C in a humidified atmosphere of 5% CO2. The medium was changed every 2 d, and cells were passaged by treatment with a 0.05% trypsin-EDTA solution. The cells were used between passages 3 to 8. All animal experimental procedures were in accordance with the National Institutes of Health's Guide for the Care and Use of Laboratory Animals and were approved by the Animal Care and Use Committee of the Military Medical Sciences of PLA, as well as the Animal Laboratory Administration Center and Ethics Committee of the Military Medical Sciences of PLA.

VSMCs were plated in 6-well plates (Flexcell International Corp., Hillsborough, NC, USA) coated by type I collagen (Solarbio, Beijing, China) at a concentration of 3 × 105 cells/mL. After 24 h attachment, the cells were synchronized by DMEM with 10% FBS for another 24 h and then applied to cyclic stretch produced by FX-5000T Tension System (Flexcell International Corp., Hillsborough, NC, USA) with 10, 15, and 20% elongation at a frequency of 1 Hz (60 cycles/min), and the duration of cyclic stretching forces for 24 h.

Inhibition of the Rho/ROCK pathway

VSMCs from each group were stained with annexin V-fluorescein isothiocyanate to determine the number of apoptotic cells. And another samples were fixed with 75% ethanol and treated with RNase to analyze the cell cycle. Then, cell nuclei were stained with propidium iodide (Molecular Probes, Eugene, OR, USA), and VSMCs were analyzed using a FACSCalibur flow cytometer and Cell Quest software (Becton Dickinson, Franklin Lakes, NJ, USA).

VSMCs were inoculated in 6-well culture plate. Cell counting kit-8 (CCK-8; DOJINDO, Kumamoto, Japan) solution was mixed with serum-free medium in a 1:10 ratio (v/v). The mixture was added at 100 μL per well and incubated at 37° C and 5% CO2 for 1 h. Absorbance at 450 nm was measured using an enzyme marker.

VSMCs from each group were fixed in 4% paraformaldehyde for 20 min, and permeabilized with 0.2% Triton X-100 for 10 min at room temperature. Each sample was dripped with 3% BSA blocking solution and sealed at room temperature for 30 min. Then, samples were incubated with primary antibody to YAP (bs-3605R; Bioss, Los Angeles, CA, USA) and fluorescent CY3 goat anti-rabbit IgG secondary antibody (rhodamine-labeled, BA1036; Boster Biological Technology, Pleasanton, CA, USA). The nuclei were counterstained with 4’, 6-diamidino-2-phenylindole (DAPI; 1:500). The samples were observed under the confocal laser scanning microscopy.

All data generated or analyzed during this study are included in this published article.

Mechanical stretch intensity influences the proliferation and apoptosis of VSMCs 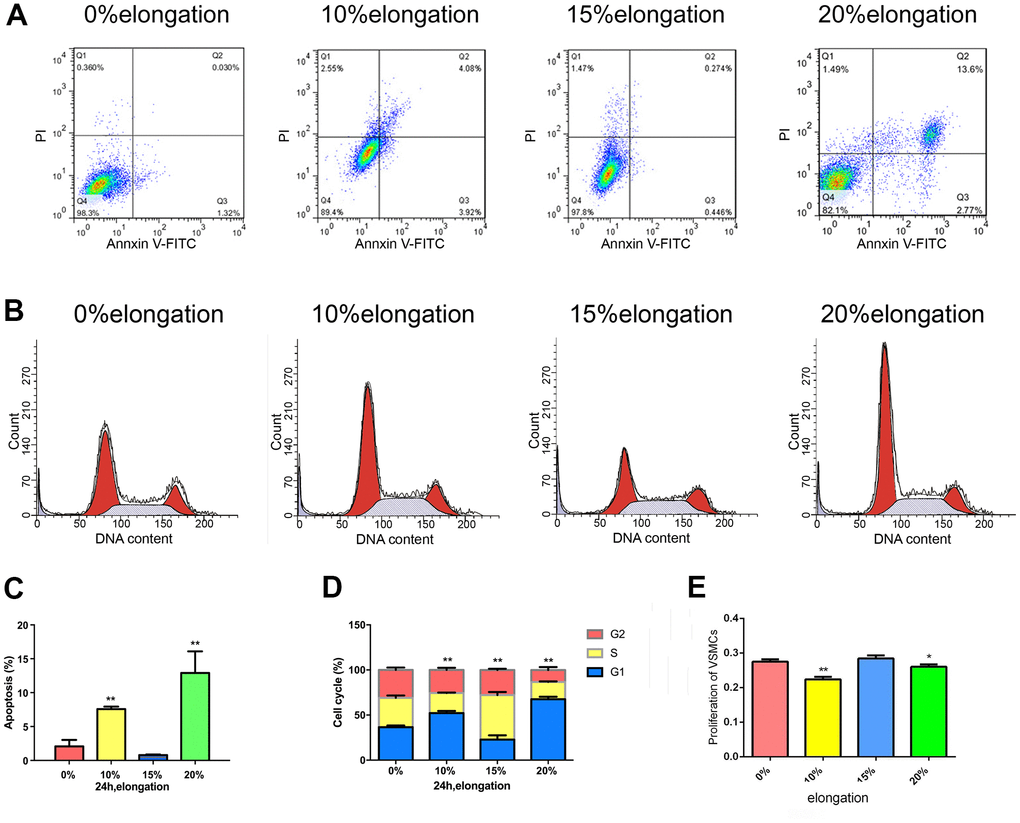 Effects of different intensities of mechanical stress on YAP 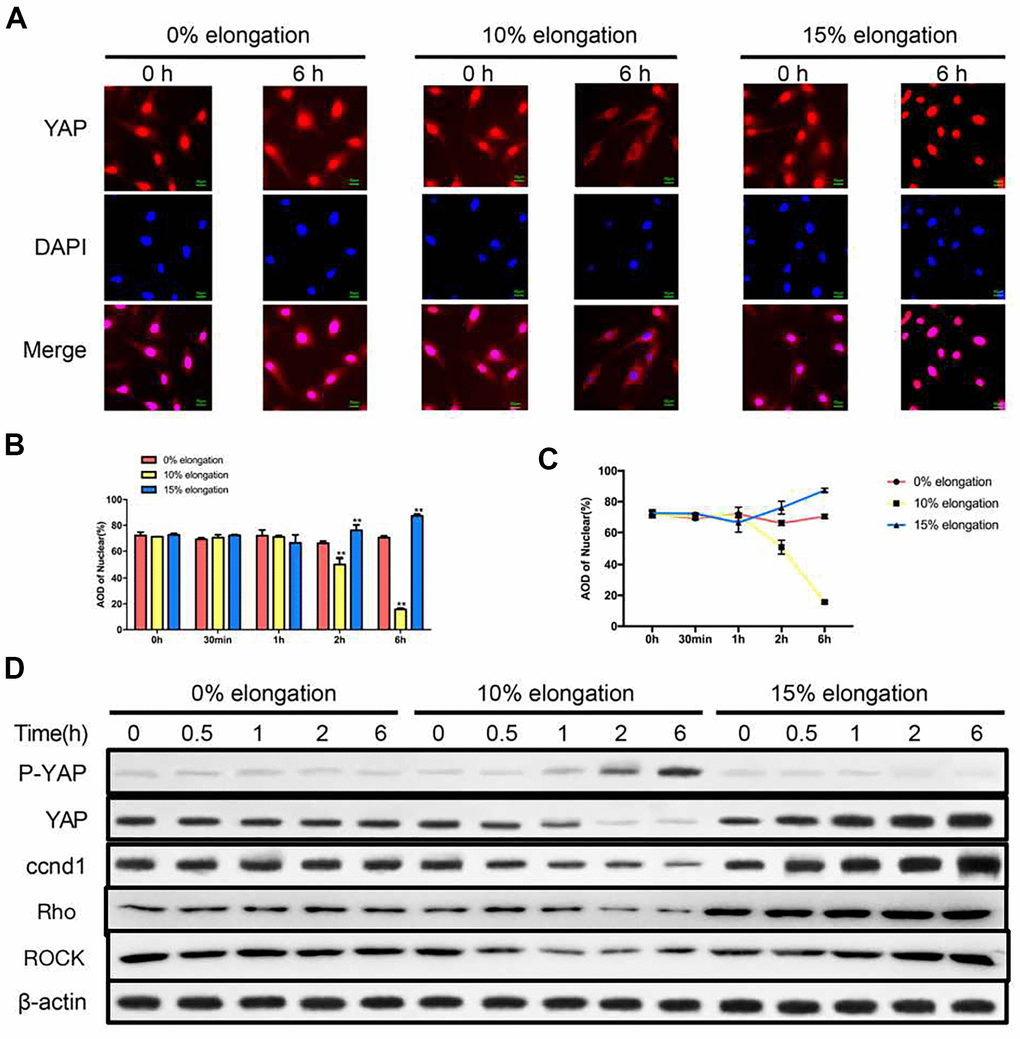 Figure 2. Effects of different intensities of mechanical stress on YAP. (A) The YAP localization of VSMCs was detected by immunocytochemistry. (B, C) Quantification of nuclear YAP amount in VSMCs. (D) The levels of phosphorylated YAP and cyclin D1 (ccnd1) in VSMCs were detected by western blotting. Values are expressed as means±SD. **P < 0.01, compared with 0% elongation group.

To determine the effects of the Hippo pathway in VSMCs, we knocked down YAP by siRNA. We tested the efficiency of different YAP-targeting siRNAs using western blotting to generate optimal knockdown of YAP. Our results showed that YAP siRNA1 (ACAGCAGGAGTTATTTCGG) resulted in the greatest knockdown of YAP (Figure 3A). To test the effects of YAP knockdown on VSMCs proliferation, apoptosis, and the cell cycle under different intensities of mechanical stimulation, we performed CCK-8 assays and flow cytometry. The CCK-8 assays indicated that cell proliferation was inhibited following YAP knockdown in each group (Figure 3F). Compared with 0% elongation, VSMCs proliferation was decreased in the absence of YAP with 10% elongation, but increased with 15% elongation (Figure 3F). Following YAP knockdown, VSMCs showed a similar rate of proliferation under the different mechanical stimulations, but with smaller amplitudes (Figure 3F). Flow cytometry analysis demonstrated that apoptosis of VSMCs was increased following YAP knockdown under all stretch intensities (Figure 3B, 3C). The rate of apoptosis of VSMCs was significantly increased following YAP knockdown under 10% elongation (Figure 3B, 3C). Moreover, flow cytometry revealed that YAP knockdown kept more VSMCs in the G0/G1 phase under the same intensity of stretch, indicating that more VSMCs were in a state of dormancy (Figure 3D, 3E). Compared with the 0% control group, G0/G1 phase cells in the 10% and 15% control group were significantly increased and decreased, respectively (Figure 3D, 3E). A similar trend was apparent in the YAP shRNA groups (Figure 3D, 3E). 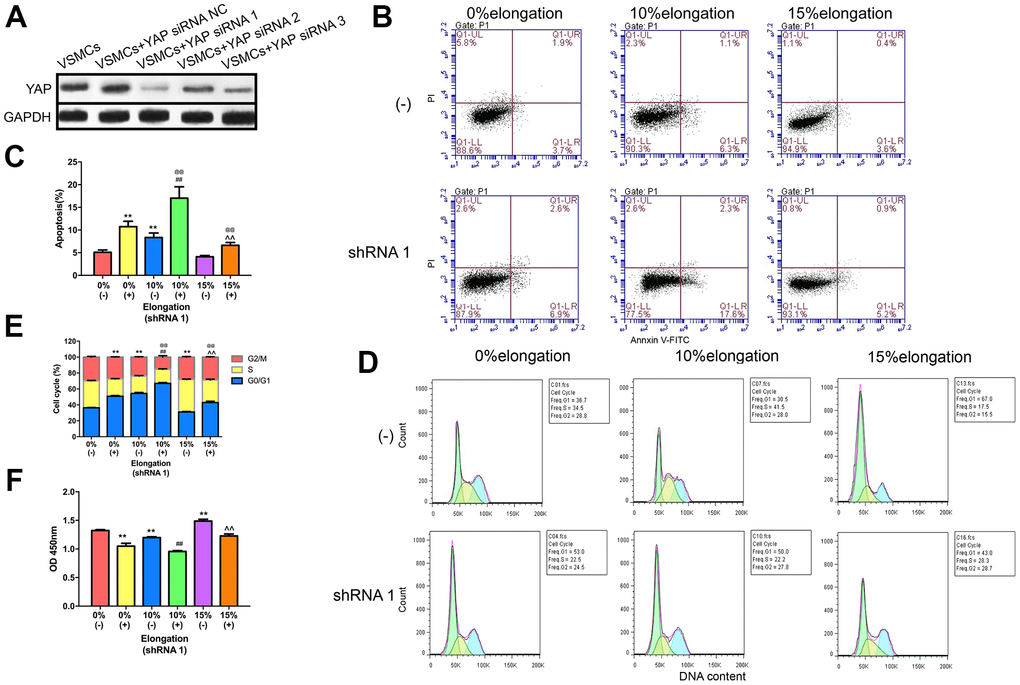 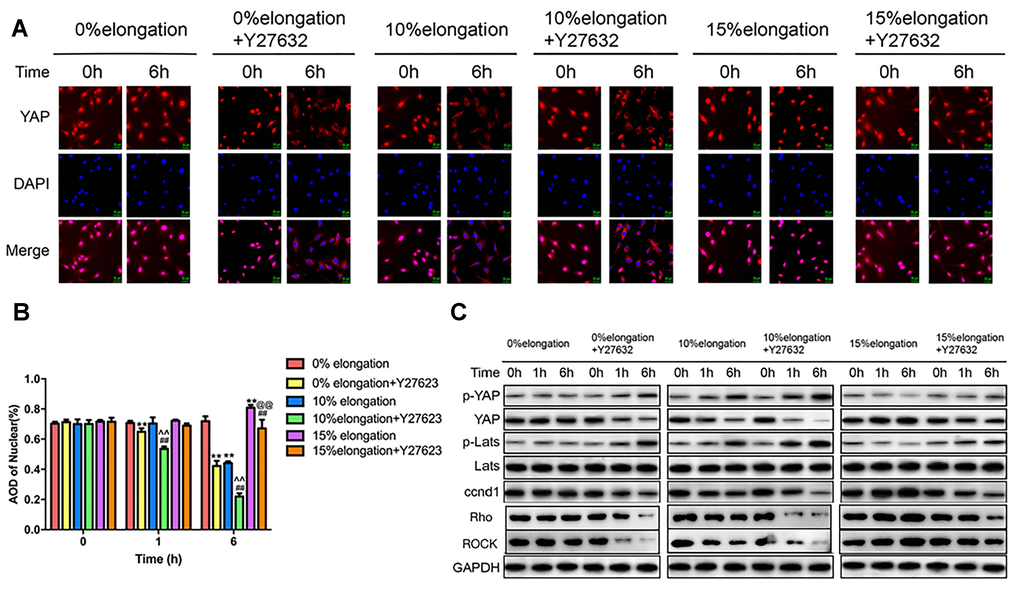 One emerging concept is that changes in the VSMCs phenotype in response to mechanical forces are important in vascular diseases, such as hypertension, atherosclerosis, aortic aneurysms, and age-dependent arterial stiffening [21, 26, 27], in which the vascular wall is exposed to chronically elevated levels of cyclic stretch. In particular, the production of aortic aneurysms and aortic vascular VSMCs reduction are closely related. Different parts of the aorta are subject to different pressures, and the pathogenesis of aortic aneurysms may vary by location. Our study demonstrated that different intensities of stretch differently affect the proliferation and apoptosis of VSMCs. 10% and 20% of the stress-induced S phase cells reduce, may inhibit cell proliferation, 15% stress-stimulated S phase cells relative increase, may promote cell proliferation (Figure 5). However, we believe that VSMCs will not continue to grow, or may even break up, if more than 20% elongation force is applied. This also confirmed the effect of the difference of 10% physiological elongation and 15% stress elongation on the proliferation and apoptosis of VSMCs. Therefore, we believe that applying more tension to VSMCs is not necessary. In this study we sued 10% and 15% elongation forces, which we believe are more representative experimental conditions. 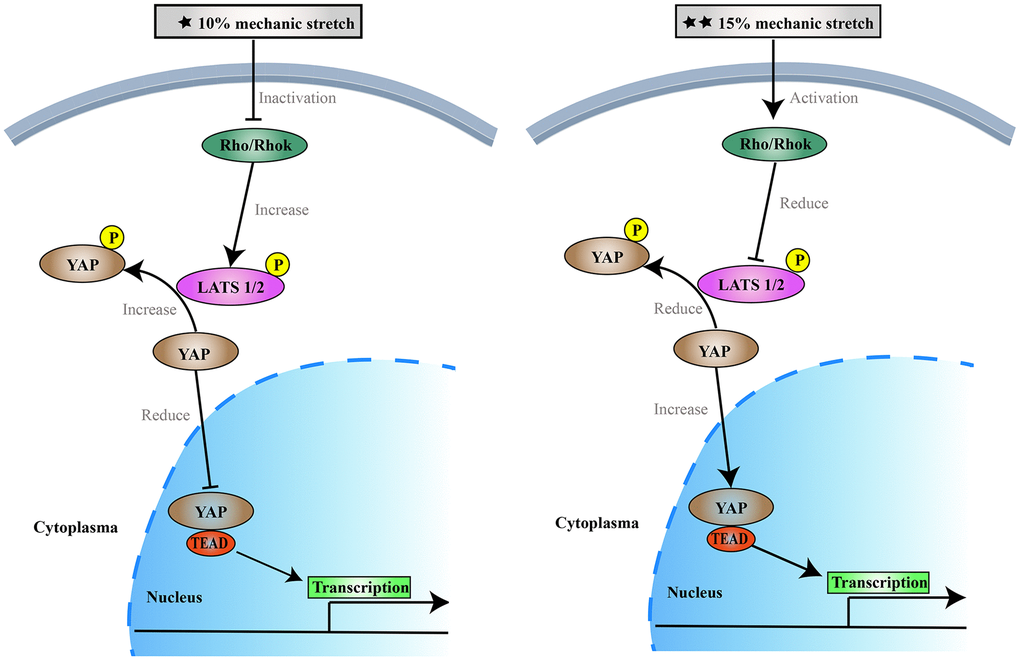 Figure 5. The effects of 10% and 15% elongation stretch on the proliferation and apoptosis of VSMCs.

In addition, we tested the activity of the Rho-ROCK pathway and found that 10% elongation stimulated the expression of related proteins to decrease, while 15% elongation stimulated the expression of related proteins to increase. After blocking the Rho-ROCK pathway, the effects of different intensities of stretch on YAP were weakened and phosphorylated YAP was decreased in each group. Overall, inhibition of the Rho-ROCK pathway combined with 10% mechanical stress led to activation of the Hippo pathway, which in turn reduced nuclear localization of YAP. YAP failed to bind to TEAD; this led to a decrease in ccnd1 expression, inhibition of VSMCs proliferation, and promotion of apoptosis. When the mechanical stress was increased to 15%, we observed the opposite effects.

Through our experiments, we found that the mechanism underlying the effects of mechanical stress on VSMCs is as follows: after being stimulated by physiological 10% elongation stretch, VSMCs are inhibited in various ways. Inhibition of Rho-ROCK leads to a decrease in LATS1/2 levels, which in turn leads to an increase in the phosphorylation of YAP. Phosphorylated YAP cannot enter the nucleus nor bind to TEAD. On the other hand, our ongoing experiment shows that 10% elongation stretch may downregulates the expression of miR130a, which increases the amount of VGLL4. In the nucleus, VGLL4 may competes with YAP for the opportunity to bind TEAD. As a result of these two mechanisms, 10% elongation reduced ccnd1, resulting in decreased VSMCs proliferation and increased apoptosis, while a stimulus that is lower or higher than physiological elongation resulted in opposing effects, eventually promoting the proliferation of VSMCs and reducing apoptosis.

On conclusion, our study demonstrates the possibility of preventing or treating diseases such as aortic aneurysms by controlling blood pressure. The Rho-ROCK pathway can be activated by mildly adjusting the blood pressure. Activation of the Rho-ROCK pathway, in turn, inhibits the Hippo pathway and ultimately promotes VSMCs proliferation and inhibits apoptosis. Our findings may provide insight into the pathogenesis prognosis of these diseases, as well as into therapeutic interventions.