Copyright: © 2022 Huang et al. This is an open access article distributed under the terms of the Creative Commons Attribution License (CC BY 3.0), which permits unrestricted use, distribution, and reproduction in any medium, provided the original author and source are credited.

Objectives: To study how marital status influences overall survival (OS) in patients with stage IA non-small cell lung cancer (NSCLC). And whether the result is valid in different time periods.

Materials and Methods: We retrospectively analyzed 55,207 cases of stage IA NSCLC from 1995 to 2015 in the Surveillance, Epidemiology, and End Results (SEER) database. Marital status was classified as follows: married or with unmarried/domestic partner (MR/W.P), divorced or separated (DV/SP), widowed (WD), and single (never married). Patients diagnosed in 1995-2005 and 2006-2015 were analyzed separately as groups 1 and 2, respectively, to validate the results. Within each group, age-stratified demographic, clinicopathologic features, and OS were compared among different marital statuses.

Socioeconomic factors have been actively investigated for their impact on cancer prognosis and potential to facilitate novel public health interventions. Among these factors, marital status has been found to be related to survival outcome in breast cancer [1], renal cell carcinoma [2], bladder urothelial carcinoma [3], esophageal cancer [4], rectal cancer [5] and prostate cancer [6]. However, the effect of marital status on survival of NSCLC patients remains equivocal: some researchers found no association between marital status and survival in NSCLC [7, 8], while others concluded that marital status affected overall survival (OS) of stage IV lung cancer [9] and being married was associated with lower risk of death [10].

Patients in the married group had a higher proportion of men and more often were White or American Indian/Alaska Native or Asian/Pacific Islander. Widowed people were more likely to be women, with a higher median age (74 years old). 66 patients from group 2 and no patients from group 1 have had unmarried or domestic partners. Married or has unmarried or domestic partners were considered the same group (MR/W.P), because these patients all had partners in life. Interestingly, the mean tumor size was smaller in group 2 than in group 1 (17.84 ± 6.58mm vs 19.26 ±6.72 mm).

Impact of marital status on OS

Kaplan-Meier analysis and log-rank test revealed that impact of marital status on OS differs between the age-strata and may differ in different time period. 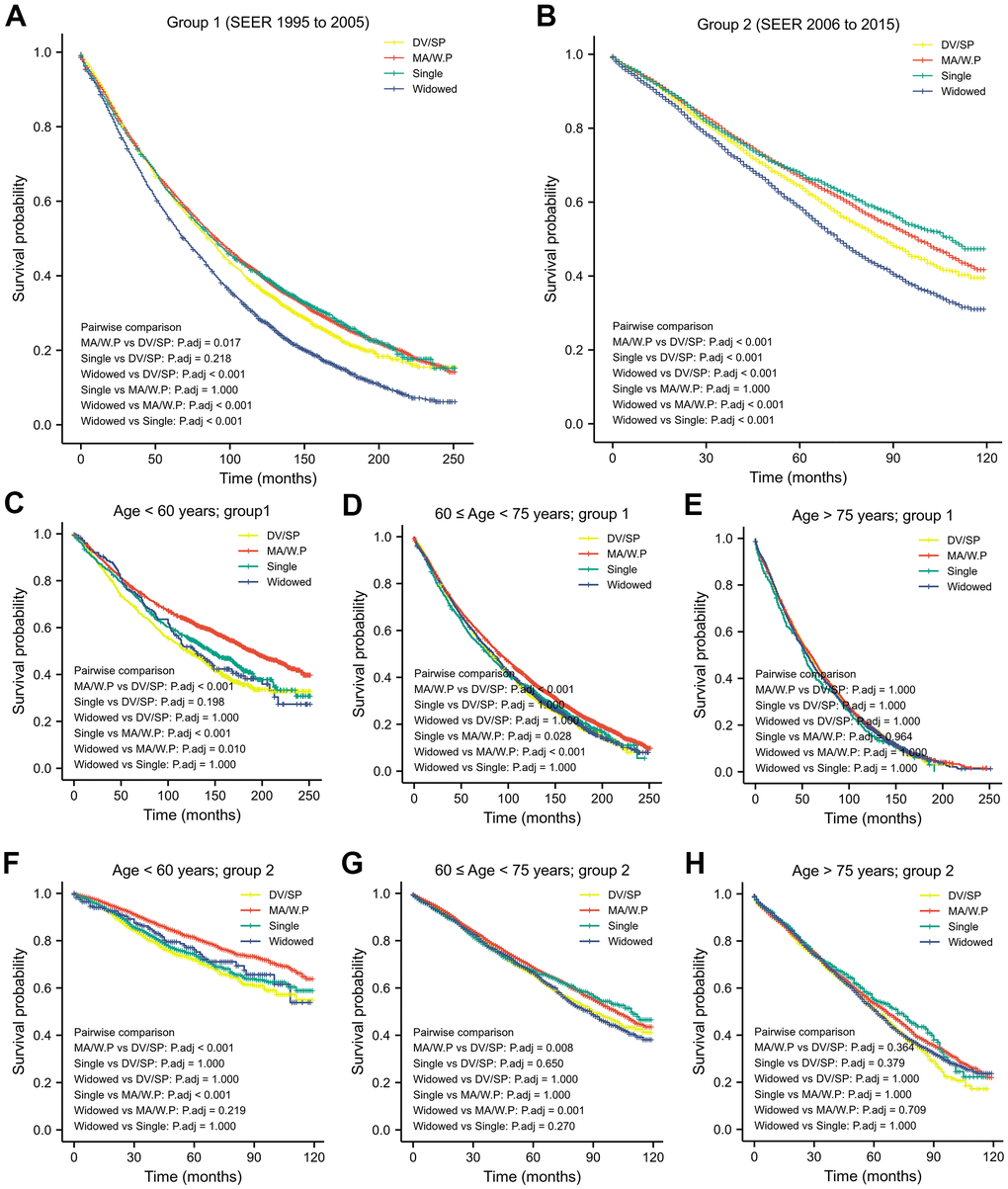 Figure 1. Kaplan-Meier analysis and log-rank test revealed that impact of marital status on OS varies in different time period (A, B) and in different age-strata (C–H).

In patients younger than 60-years old, OS in the MA/W.P was statistically longer than other 3 marital statuses (group 1, 2; Table 3 and Figure 1C, 1F).

Starting at age 75 years, the OS was not distinct among older patients from different marital statuses (Table 3 and Figure 1E, 1H).

Table 4. Univariate and multivariate survival analysis for evaluating the influence of marital status on OS in SEER database.

Impact of marital status on OS differs within in different age-strata and the median of age differs in each marital status, especially in widowed, whose median age was much higher than other patients. Therefore, to estimate adjust relative risk over marital status, we performed subgroup analysis within each age strata. All known prognostic factors including age were included in the multivariate cox regression analysis (Table 4). Widowed patients was the reference group, MA/W.P was associated with significant lower relative risk regardless of time and age, even in elderlies > 75-year old. Single, interestingly, was associated with lower risk similar to MA/W.P for patients ≥ 60 years-old and diagnosed as stage 1A NSCLC after 2005 (Table 5, group 2).

Impact of marital status on OS during the last two decades

Several studies have found that cancer patients in marriage are more likely to live longer [11]. Other researchers have reported greater benefits of marriage on conditional relative survival in cancer at early stages [12]. However, the association between marital status and OS of NSCLC patients remains controversial [8, 13–15]. Such controversy may partially arise from treatment complexity in advanced-stage cancer. In order to minimize confounding issues such as differing chemo- and radiotherapy regimens, we focused on stage IA NSCLCs, for which surgical resection alone is the only recommended treatment. As a result, the impact of marital status on OS can be explored while minimizing confounding medical factors.

In the last two decades, cancer screening methods, surgical strategies, population characteristics, social paradigms, and economic factors have evolved significantly in the United States. Hence, analysis was performed separately in two consecutive time periods to validate the result. Another important factor is age, which can be both a confounder and an effect modifier. Theoretically, people are more capable of recovering from marriage failure when they are young. Psychosocial interventions may have an important effect on survival and these interventions appear to be more effective in patients who are unmarried, older, attend Cognitive-Behavioral Therapy and have early-stage cancer 21. Since the World Health Organization categorizes age beyond 60-year-old as elderly, median age of the widows was 74-year old, patients beyond 74 had similar median age in different marital status, and using 60, 65 or 70 as boundary of stratified analysis would yield similar result (impact of marital status on OS), we decided to separate patients into three subgroups (age ≤60, 60 ≤ age < 75, age ≥ 75 years).

Although some of our findings corroborated previous publications, the following new findings were identified in our study.

First, we revealed a significantly prolonged OS during the last two decades except for the DV/SP patients: Median OS was prolonged significantly in single patients (from 89 to 109 months, p <0.001) and in widowed patients (from 70 months to 72months, p = 0.018). This can be explained mainly by progress in medical science. However, median OS of DV/SP patients did not show a statistically significant increase over the 20 years. Many factors, including lifestyle and weak social support systems, may contribute to this phenomenon. These socioeconomic factors [16] may impact cancer prognosis and even outweigh the survival benefits from medical progress. As the global population ages, further studies are needed to explain and address this problem.

Nevertheless, this is the first-time failed marriage (DV/SP) was shown to potentially offset the survival benefits from medical progress in the last decade in stage IA NSCLC patients, which can contribute to current literatures.

Second, this study not only verified the conclusion that being married is associated with lower relative risk of death in cancer patients [4, 7, 15, 17–19] but also validated protective effect of MA/W.P in cohort from different time periods and in different age group. We reported, for the first-time, possible protective role of being single (Table 4). which seems only present in patients ≥ 60 years and received diagnosis after 2005. As time goes by, populations of different marital status may have different characteristics. And how marital status affects cancer survival cloud also change. Therefore, further studies are required to understand the mechanisms of the evolving phenomenon and to provide updated reference to personalized care.

Finally, this is the first study revealing that the impact of marital status on patient survival varies significantly by age-group. Previous studies on the impact of widowhood on survival have had conflicting results. One study of Floridian patients with lung cancer revealed longer survival in married and widowed patients than in DV/SP and single patients [20]. Another Japanese study of 1,230 NSCLC patients demonstrated that widowed patients had the worst survival among married, separated, divorced and single male patients [14]. One study of 5,898 NSCLC patients from Mayo Clinic Lung Cancer Cohort found no statistically significant difference in survival among widowed, married, single and divorced patients, while subgroup analysis found stage IA widowed patients had a shorter survival [8]. Age difference may contribute to such controversy, for instance median age of the widows is 6-12 years elder than other marital status. In our study, after adjusting by age and other factors, being widowed and the DV/SP patients had similar OS shorter than the MA/W.P. One possible explanation is their social networks and may rely more on their families for support. The passing away of a loved one or marriage loss may lead to psychological trauma, less emotional and financial support.

Survival disparities based on marital status could also be attributed to the influence of family on the patient’s treatment decisions. Previous studies demonstrated that the family was involved in the decision-making process for most patients first-time diagnosed with lung cancer [21]. Unmarried patients, when diagnosed with staged IA NSCLC, more commonly refused surgery and came from lower socioeconomic backgrounds [22]. In addition, widowed and divorced patients preferred less aggressive cancer therapy [8] and were less likely to receive first-line surgical treatment [23].

This retrospective study has limitations: first, the potential for selection bias exists, as the sample population is mainly U.S based. Although robust data from other countries was not accessible, validation was performed using another group of patients with a different year of diagnosis. Moreover, the large sample size supports these findings as extrapolatable to the general population. Second, although both regression and stratification were used to control for confounding variables, unknown confounders may still exist, including comorbidities and other social variables, especially retirement. Patients were stratified by age older or younger than 60 years, which is a common age of retirement. However, retirement could not directly be controlled for, as this information was absent in the records.

In summary, this is the first age-stratified study about marital status and survival on early-stage NSCLC using historical cohort for validation. Being married or having an unmarried partner was associated with a significant lower relative risk. In contrast, marriage loss (widowed, DV/SP) were at a significantly higher risk of death. The progress of medical science in the preceding decades did not benefit survival of patients with marriage loss. Future studies could be designed with input from multidisciplinary specialists, e.g., psychologists and geriatric physicians, to further elucidate the underlying mechanisms and establish tangible interventions to address these survival disparities among individuals with different marital statuses.

Permission to access SEER research-data files was obtained using reference number 16139-Nov2017. As the SEER database does not require informed patient consent, this study was exempted from the ethical approval requirements of the Institutional Review Board (IRB). NSCLC cases between 1995 and 2015 in the SEER public access database and their corresponding details were retrieved with the use of SEER*Stat version 8.3.5 software. Cases from 1995 to 2005 were designated as the test data set, while cases from 2006-2015 were designated as the validation data set.

A total of 55,207 cases were obtained using the following inclusion criteria: (1) Underwent surgery for first-time diagnosed primary NSCLC. (2) Clinically and pathologically staged T1N0M0 (3) Tumor size ≤ 3cm (or recorded as T1 on diagnosis). (4) With known marital status. Patients without marital status or survival data were excluded. Eligible patients were categorized by marital status, age at diagnosis, race, sex, and grade and size of tumor (millimeter, mm). Marital status at diagnosis was the primary variable of interest and classified as married or with unmarried/domestic partner (MR/W.P), divorced or separated (DV/SP), widowed(WD), and single (never married).

This work is supported by the National Natural Science Foundation of China (CN) 81602104 and by the Tongji Hospital, Tongji Medical College, Huazhong University of Science and Technology (Grant number 2021A21).