Copyright: © 2022 Jiao et al. This is an open access article distributed under the terms of the Creative Commons Attribution License (CC BY 3.0), which permits unrestricted use, distribution, and reproduction in any medium, provided the original author and source are credited.

Objectives: The aim of this study was to explore the expression of Galectin-9 in hepatitis B virus (HBV)-associated hepatocellular carcinoma (HCC), evaluate its clinicopathological significance, and investigate whether Galecin-9 expression has prognostic value in HBV-associated HCC.

Methods: Immunohistochemistry staining was performed to examine the expression of Galectin-9 in paraffin-embedded tissues from 140 cases of HBV-associated HCC specimens. The association between Gal-9 expression, clinicopathological features and prognosis was analyzed by Kaplan-Meier method, log-rank test and Cox regression analysis. Dual immunofluorescence (IF) staining was performed to identify the cell types that have positive Gal-9 expression.

With more than 900 thousand new cases and 830 thousand deaths in 2020, liver cancer ranked as the 6th most commonly diagnosed malignancies and third cancer-related cause of death worldwide [1]. As the main pathological type of liver cancer, hepatocellular carcinoma (HCC) accounts for 75-85% of all cases and chronic hepatitis B virus (HBV) infection is one major risk for HCC [2]. Across the world, more than 250 million people are HBV carriers, and new-born children from HBV-infected mothers also become chronic carriers, they are destined to develop HCC [3]. Thus, it is essential to identify prognostic biomarkers in HBV-associated HCC.

Galectins belong to the lectin family that bind β-galactoside through highly conserved carbohydrate recognition domains (CRDs). Galectin-9 (Gal-9) is the subgroup of tandem repeat-type galectins, since it contains 2 conserved CRDs [4, 5]. So far, Gal-9 has been identified as the ligand of several receptors, such as T cell immunoglobulin- and mucin-domain-containing molecule (Tim-3), CD44 and Dectin 1. Gal-9 could inhibit immune response through different mechanisms [6]. For example, Gal-9 could induce Th1 cell death through Tim-3, thus inhibiting Th1 immunity [7]. Gal-9 could increase iTreg cell stability and function through the interaction with CD44 [8]. And Gal-9 could induce macrophage mediated adaptive immune suppression through its binding to Dectin 1 [9].

In HCC, several studies have shown that Gal-9 expression also have prognostic value. For example, in one study, Li et al. reported that Gal-9 was highly expressed in Kupffer cells (KCs), which were colocalized with Tim-3 positive T cells in HBV-associated HCC patients. They also found that positive Tim-3 expression predicted poor survival in HBV-associated HCC patients, and blocking the interaction between Tim-3 and Gal-9 could increase the function of Tim-3 positive T cells [14]. However, they didn’t evaluate the prognostic value of Gal-9 in their study. Several other studies showed different results. Sideras et al. found that 79% HCC patients had Gal-9 expression, while Gal-9 mainly expressed in tumor cells, they also found that low Gal-9 and PD-L1 expression level and low number of CD8+ tumor-infiltrating lymphocyte (TILs) were associated with reduced outcome in HCC [15]. Besides, they also found that high level of circulating Gal-9 could also predict better survival in HCC. Furthermore, combined analysis of intra-tumoral Gal-9 expression and its circulating level could more confidentially predict survival [16]. Zhang et al. found that Gal-9 expression could be detected in 56.5% of HCC patients, Gal-9 was mainly expressed in tumor cells and its expression was closely correlated with histopathological grade, vascular invasion, lymph node metastasis and intrahepatic metastasis. They also found that patients with Gal-9+ tumors had longer survival time than those with Gal-9- tumors [17]. According to these studies, the cell type that express Gal-9 was not consistent, and the prognostic value of Gal-9 seemed also controversial. Thus it is necessary to further evaluate the prognostic value of Gal-9 in HCC.

HBV-associated HCC tumor tissues were collected from 140 patients that received surgery at Xijing Hospital (Xi’an, China) from 2008 to 2013. Tumor specimens were formalin-fixed, paraffin-embedded and stored at the Department of Pathology of Xijing Hospital. After the surgery, patients were followed up with an average period of 51 months (1-116 months). And detailed pathological diagnosis was later on confirmed by two experienced pathologists that are blinded to the study design. The diagnostic standard was based on the seventh edition of AJCC (American Joint Committee on Cancer) staging manual. All of the clinical information was collected from electronical record in Xijing Hospital.

The formalin-fixed tissue samples were routinely processed by IHC staining to examine the expression of Gal-9 with a Gal-9 specific antibody (#54330, Cell Signaling Technology; 1:400), as we previously reported [18]. Detailed protocol of IHC staining was provided in Supplementary Materials.

Evaluation of IF staining

Quantitation of the colocalization between Gal-9 and CD68, GPC3, CD163, CD206 was analyzed by Coloc 2 of Fiji (ImageJ, 1.52i, National Institutes of Health, USA). Detailed procedures about IF staining evaluation are provided in Supplementary Materials.

We performed statistical analysis using SPSS 23.0 statistic software (version 23.0, IBM, Armonk, NY, USA). Descriptive statistics, such as mean, standard deviation, and absolute and relative frequencies, were calculated to define the basic characterizations of the study cohort. Chi-squared test was performed to evaluate the association between the expression of Gal-9 and patients’ clinicopathological features. We generated survival curve by Kaplan-Meier method and compared them by log-rank test. Then, the hazard ratios with their 95% confidence intervals (CI) were evaluated by Cox proportional hazards models. P < 0.05 was regarded as statistically significant.

This study was approved by the ethics committee of Xijing Hospital, Fourth Military Medical University.

Data and material used to support the findings of this study were provided in the article. 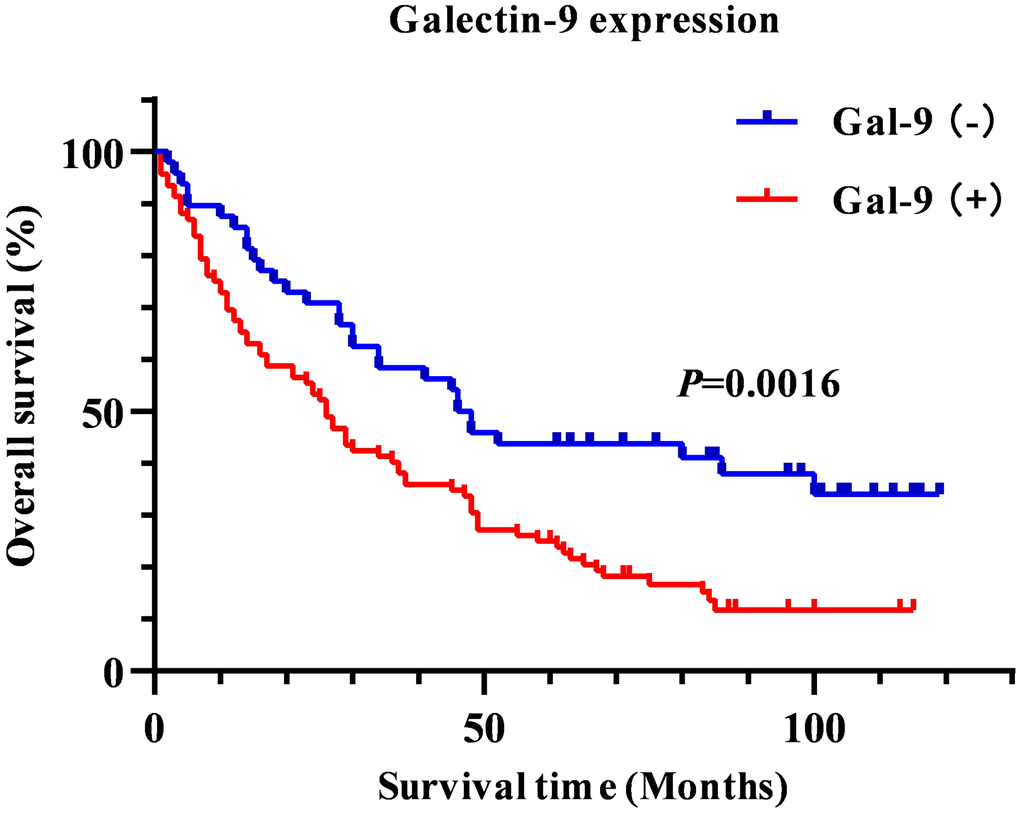 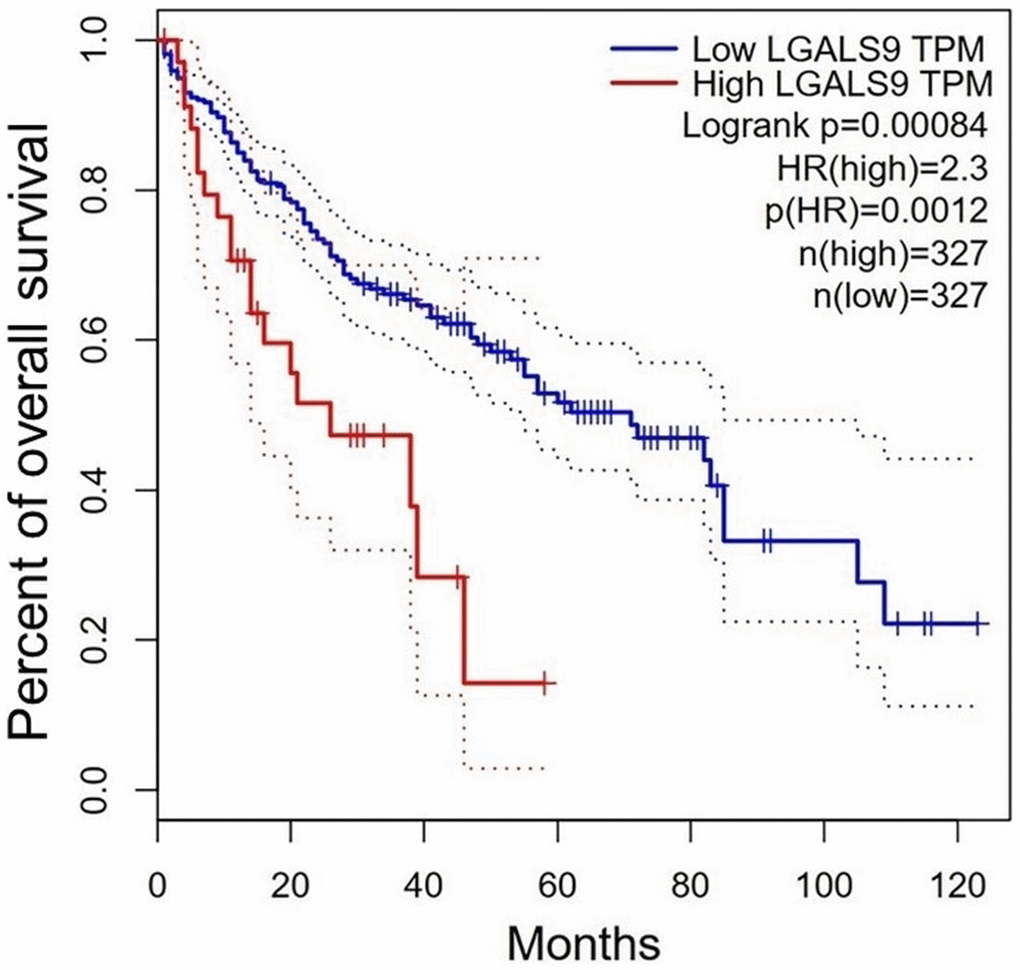 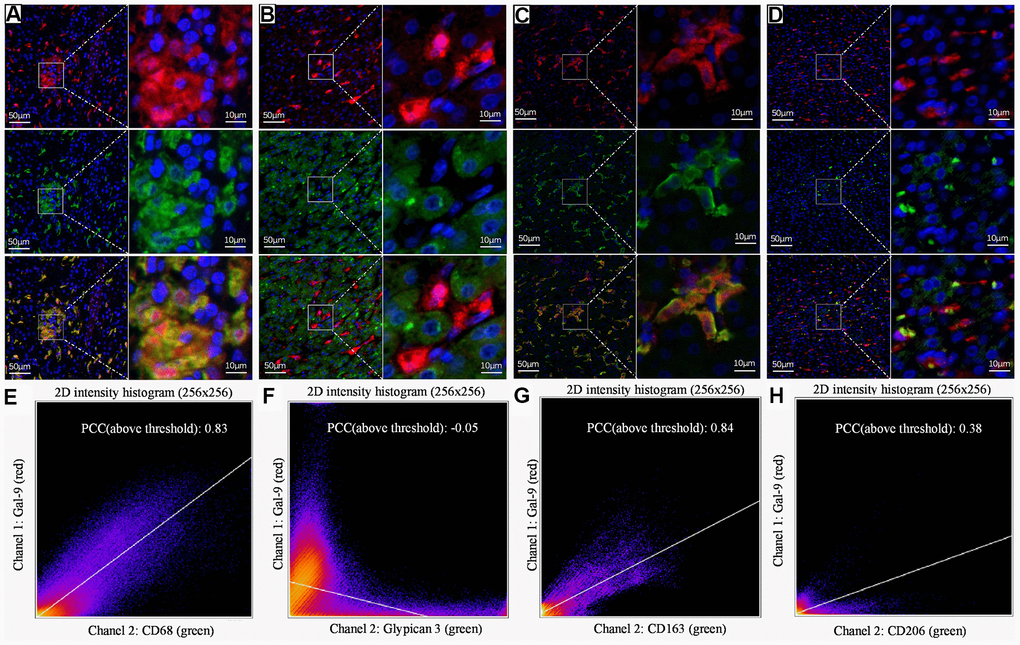 Gal-9, a S-type lectin that belongs to Galectin family, plays an essential role in the regulation of immune response. Gal-9 was identified as a ligand of Tim-3, and its binding with Tim-3 could induce Th1 cell death, thus inhibiting Th1 immunity [7, 20]. Besides direct interaction with Tim3 on T cells, Gal-9 could promote the expansion of CD11b+Ly-6G+ cells, which represent the granulocytic myeloid-derived suppressor cells (MDSCs), thus indirectly regulate Th1 immune responses [21].

Besides Tim3, Gal-9 has also been identified to interact with other receptors, such as CD44 and Dectin 1. Wu et al. found that Gal-9 was highly expressed in induced regulatory T cells (iTreg), and Gal-9 could bind with CD44 to activate Smad3, thus increase the stability and function of iTreg cells [8]. Gal-9 could also bind with Dectin 1, resulting in macrophage mediated suppression on adaptive immune response in pancreatic ductal adenocarcinoma (PDA) [9]. Recently, Gal-9 was identified as a program death-1 (PD-1)-binding molecule, and the interaction between Gal-9 and PD-1 could attenuate TIM-3/Gal-9-induced cell death, thus regulate the exhaustion of T cells and the efficacy of immunotherapy [22].

Besides tumor cells, Gal-9 has also been found to be specifically expressed in other cell types in different tumors. For example, in early-stage small cell lung cancer (SCLC), Chen et al. demonstrated that Gal-9 was mainly expressed in TILs, and Gal-9 expression was markedly correlated with immune infiltration in the tumor microenvironment. They also found that high expression level of Gal-9 on TILs predicted better recurrence-free survival (RFS) in stage I–III SCLC [27]. In muscle-invasive bladder cancer, Qi et al. found that Gal-9 mainly expressed on tumor-associated macrophages (TAMs), which predicted poor OS and RFS [28]. In osteosarcoma, Gal-9 was found to be expressed in regulatory T cells (Tregs), and its interaction with Tim3+ T cells resulted in the suppression in Th1 responses, thus inhibit immune response [29]. In metastatic differentiated thyroid cancer (mDTC), Severson et al. found that Gal-9 was expressed in tumor-involved lymph nodes (TILNs), and Gal-9 may contribute to the dysfunction of PD-1+Tim3+CD8+ T cells, thus promote disease progression [30]. Recently, Isobel et al. showed that expression of Gal-9 was upregulated in both CD8+ and CD4+T cells in the TILs and peripheral blood in patients with virus-associated solid tumors (VASTs), and Gal-9 expression was also related to the impaired function of T cells [31]. Since Gal-9 expression was indicated to be associated with the formation of suppressive immune microenvironment, Gal-9 was considered as a potential ideal target for cancer therapy [5, 32, 33].

In HCC, the cell types that express Gal-9 is still controversial, and the prognostic value of Gal-9 has not been well studied. In Li’s study, Gal-9 was found to be highly expressed in KCs, while in two other studies, Gal-9 was found to be mainly expressed in tumor cells. In addition, they also got different conclusions in the prognostic value of Gal-9 in HCC. In Li’s study, although they didn’t directly evaluate the prognostic role of Gal-9, they did find that positive Tim-3 expression could predict reduced survival in patients with HBV-associated HCC. Since they found that when the interaction between Tim-3 and Gal-9 was blocked, the function of Tim-3+ T cells could increase, indicating that positive expression of Gal-9 in KCs may predict poor survival. While in other three studies, Sideras et al. and Zhang et al. found that patients with Gal-9+ tumors seemed to have longer survival time than patients Gal-9- tumors [14–17]. These discrepancies might come from the different patients they studied, Li et al. specifically studied HBV-associated HCC patients, while the other two groups didn’t specify a subclass of the HCC patients. Because of these discrepancies, more studies are needed to confirm the cell types that express Gal-9 and the prognostic value of Gal-9 in HCC patients.

In our study, we examined Gal-9 expression in 140 HBV-associated HCC patients and found that Gal-9 was specifically expressed in certain patients, and Gal-9 expression was closely correlated with some clinicopathological features, that is, lymph node metastasis (P =0.029) and Ki-67 proliferation index (P =0.009). We also found that patients with Gal-9+ tumors tended to have shorter survival time than patients with Gal-9- tumors. Our Cox regression analysis results showed that Gal-9 could be an independent prognostic marker for HBV-associated HCC. In addition, by using dual IF staining, we confirmed that Gal-9 was mainly expressed in CD68+CD163+ KCs rather than tumor cells or M2 macrophages, indicating that Gal-9 may be involved in the formation of immune suppressive microenvironment in HBV-associated HCC.

Our data are more consistent with Li’s results, we think it’s because that we all used tissue samples from HBV-associated HCC patients. In Li’s study, they also showed CD68+ KCs had highest Gal-9 expression in HCC by flow cytometry. Yet, in their study, they only evaluated the prognostic value of Tim-3, but not Gal-9 [14]. Here, in this study, we confirmed that positive expression of Gal-9 was significantly associated with poor prognosis, that is, Gal-9 had prognostic value in HBV-associated HCC. Since Li’s study showed that the Tim-3+ T cell function can be increased by blocking the interaction between Tim-3 and Gal-9, we proposed that expression of Gal-9 in KCs may mediate a suppressive function on anti-tumor T cell response.

In brief, in this study we confirmed that Gal-9 is specifically expressed in certain HBV-associated HCC patients, and positive Gal-9 expression is closely correlated with some clinicopathological features, that is, lymph node metastasis and proliferation index, and also poor prognosis. Furthermore, Gal-9 is mainly expressed in CD68+CD163+ KCs, indicating it may promote tumor progression through the induction of immunosuppressive microenvironment. Our results suggested that Gal-9 could be a new marker for prognosis and a potential target for the therapy of HBV-associated HCC.