Copyright: © 2022 Fan et al. This is an open access article distributed under the terms of the Creative Commons Attribution License (CC BY 3.0), which permits unrestricted use, distribution, and reproduction in any medium, provided the original author and source are credited.

D-Chiro-inositol (DCI) exerts a hypoglycaemic effect, participates in lipid metabolism and reduces kidney damage. In this study, we preliminarily explored the protective effect of DCI on renal injury in diabetic mice. Male db/db mice were used in this study. After treatment with DCI (35 and 70 mg/kg/d) for 6 consecutive weeks, random blood glucose (RBG) measurements were conducted at 0 and 6 weeks. Creatinine (Cr) and serum blood urea nitrogen (BUN) levels were measured using assay kit, and morphological changes in the kidneys were observed by HE staining, Masson staining and electron microscopy. Immunohistochemical and Western blot experiments were used to examine the protein expression of matrix metalloproteinase-9 (MMP-9), nuclear factor-κB (NF-κB) and peroxisome proliferator-activated receptor-γ (PPAR-γ). We discovered that the increased RBG levels were alleviated after treatment with DCI. Moreover, the Cr and BUN levels were reduced, glomerular mesangial hyperplasia was alleviated, and the degree of renal fibrosis was reduced. In addition, DCI improved the protein expression of MMP-9 and PPAR-γ in kidney tissue, which in turn inhibited NF-κB protein expression, as shown by immunohistochemistry and Western blotting. Our findings showed that DCI ameliorated the renal injury induced by diabetes by upregulating MMP-9 and PPAR-γ expression and downregulating NF-κB expression. We preliminarily concluded that the renal protective effect of DCI on diabetic mice may occurs through the MMP-9/NF-κB signalling pathway.

Diabetic nephropathy (DN) is a microvascular disease caused by diabetes that leads to glomerular sclerosis and is a serious progressive complication of diabetes [1, 2]. Hyperglycaemia, hypertension and genetic susceptibility are major risk factors for the development of diabetic nephropathy [3]. The prevention and treatment of DN is a long-term problem for diabetic patients [4].

Previous studies have shown that the main pathological features of early renal injury include glomerular and tubular hypertrophy, basement membrane thickening, and progressive extracellular matrix (ECM) accumulation in the mesangial area [5]. MMP-9 is the main physiological regulator of the ECM, and it can degrade various components of ECM and slow the progression of glomerular sclerosis [6]. PPAR-γ is a ligand-activated nuclear transcription factor that regulates many important physiological responses, including glucose metabolism, inflammation, renal interstitial fibrosis, and insulin resistance [7]. Activated and phosphorylated NF-κB subunits (P65 and P50) translocate to the nucleus and induce the expression of DN-related target genes [8]. It has been reported that regulating NF-κB activity can improve renal ECM accumulation and fibrosis [9]. The chemical name of DCI is 1,2,4-hexahydroxycyclohexane. In recent years, DCI has been widely used in clinical research. However, evidence of its physiological and therapeutic properties is steadily emerging. First, DCI was thought to be an insulin sensitizer and islet analogue that promoted insulin sensitivity and reduced blood glucose levels. We have found that DCI also plays a key role in regulation of steroid production and other important processes, such as intercellular adhesion, inflammation and oxidation. Therefore, DCI is used to treat various diseases in the clinic [10, 11]. However, the specific pathophysiological mechanism by which DCI improves diabetic kidney injury still needs to be further explored. In the present study, we aimed to investigate the effect of DCI on fibrosis in DN. Therefore, we selected the db/db mouse model to solve these problems. The regulatory effect of DCI on glucose metabolism was evaluated by examining blood glucose, blood lipids and renal function. Subsequently, morphological changes in the mouse kidney were observed under a microscope, and changes in the expression levels of fibrosis-related proteins were measured to preliminarily explore the renal protective mechanism of DCI.

Table 1. Effects of D-chiro-inositol on the level of blood glucose in db/db mice (mmol/L).

As shown in Table 2, serum Cr and BUN levels in the MCG were significantly higher than those in the NCG. Compared with those in the MCG, serum Cr and BUN levels results in the HDCIG and LDCIG were reduced, and the effect on the HDCIG was more significant than in the other groups. The kidney index of db/db mice was significantly lower than that of db/m mice (P < 0.01). The kidney index of each drug-administered group was lower than that of the MCG group, however there was no significant difference. Our experimental results showed that DCI effectively alleviated kidney damage caused by diabetes and significantly improved renal function.

DCI significantly ameliorated histological changes in the kidney (Figure 1). HE staining showed that the nuclei in kidney tissue in the NCG were stained blue, the cytoplasm was stained pink, and the structure of the renal tubules and glomeruli was normal. The MCG had severe inflammatory cell infiltration and significant oedema of renal tubular epithelial cells. The HDCIG and LDCIG reduced renal tissue damage. Masson staining showed a significant increase in glomerular and renal interstitial fibrosis in the MCG, while that in the HDCIG and LDCIG was decreased to varying degrees. 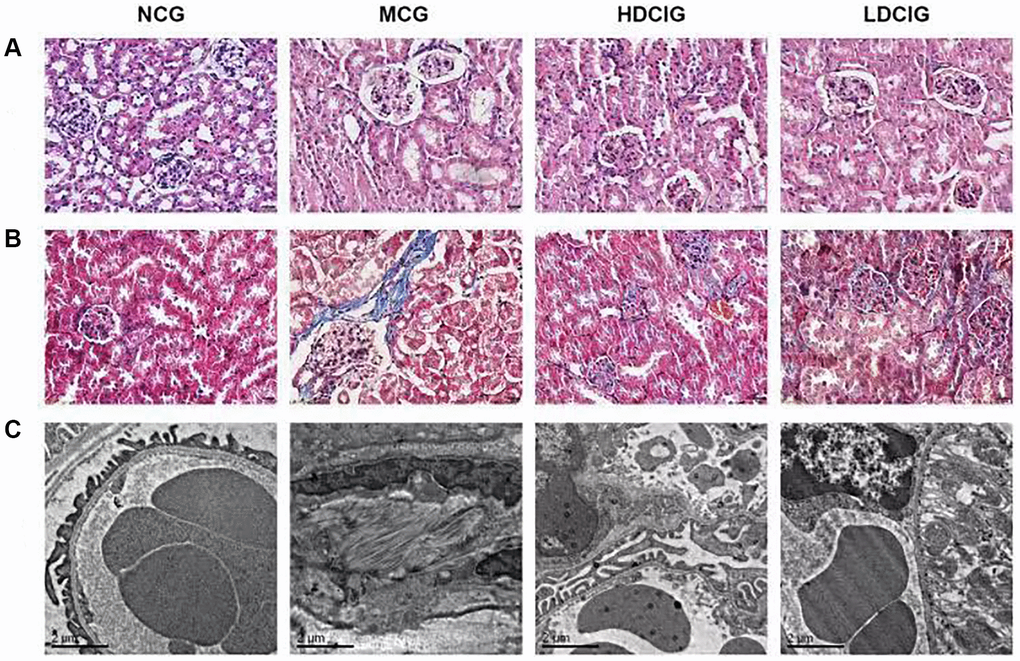 As observed by transmission electron microscopy, glomerular mesangial matrix proliferated in the MCG, which was accompanied by podocyte fusion or disappearance and basement membrane thickening. Renal mesangial matrix hyperplasia and basement membrane thickening were attenuated in the HDCIG and LDCIG, and the podocyte structure was improved compared with that in the MCG.

The immunohistochemical staining analysis are shown in Figure 2. MMP-9 and PPAR-γ proteins are expressed on mouse kidney glomerular cells. These proteins were highly expressed in the kidney tissue in the NCG, and the positive staining was brownish yellow and evenly distributed. The protein expression of MMP-9 and PPAR-γ in the MCG was lower than that in the NCG (P < 0.01). Moreover, the expression levels of MMP-9 and PPAR-γ in the HDCIG were significantly higher than those in the MCG. The NF-κB protein was expressed in the cytoplasm of tubular cells. The protein expression of NF-κB protein was lower in the NCG and higher in the MCG. The expression levels of NF-κB protein in the HDCIG and LDCIG were decreased, but there was no significant difference between the two groups. 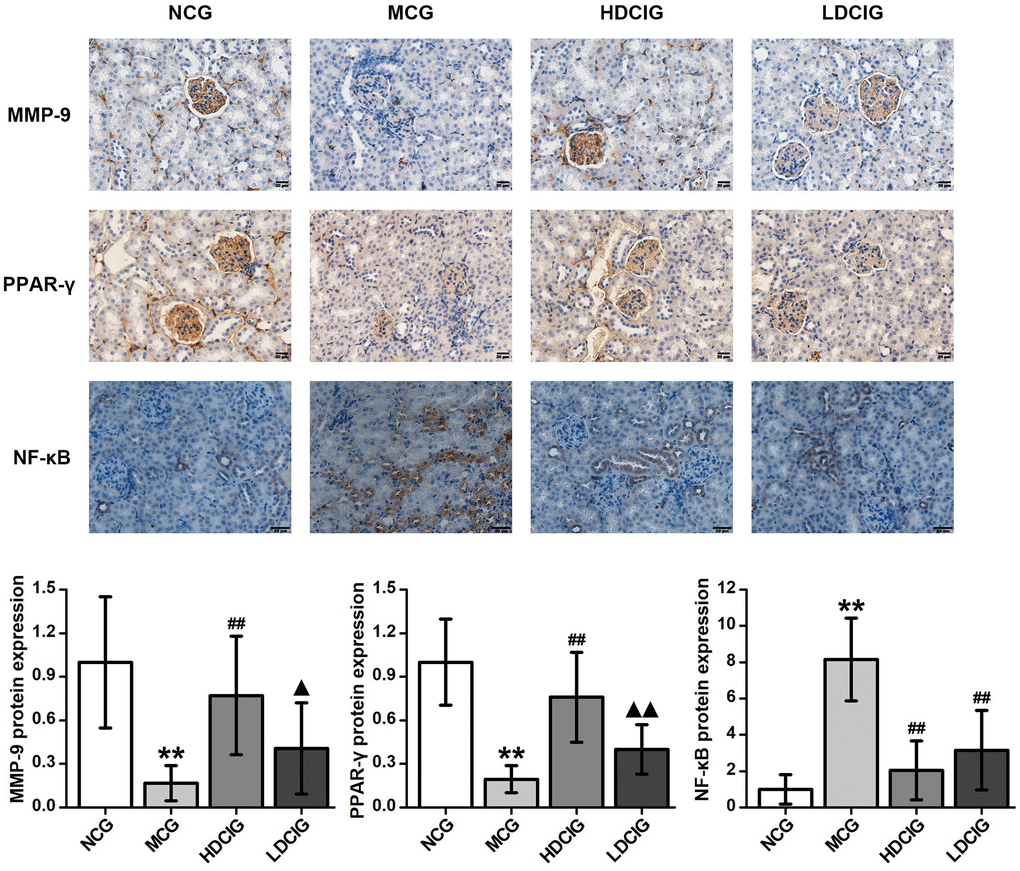 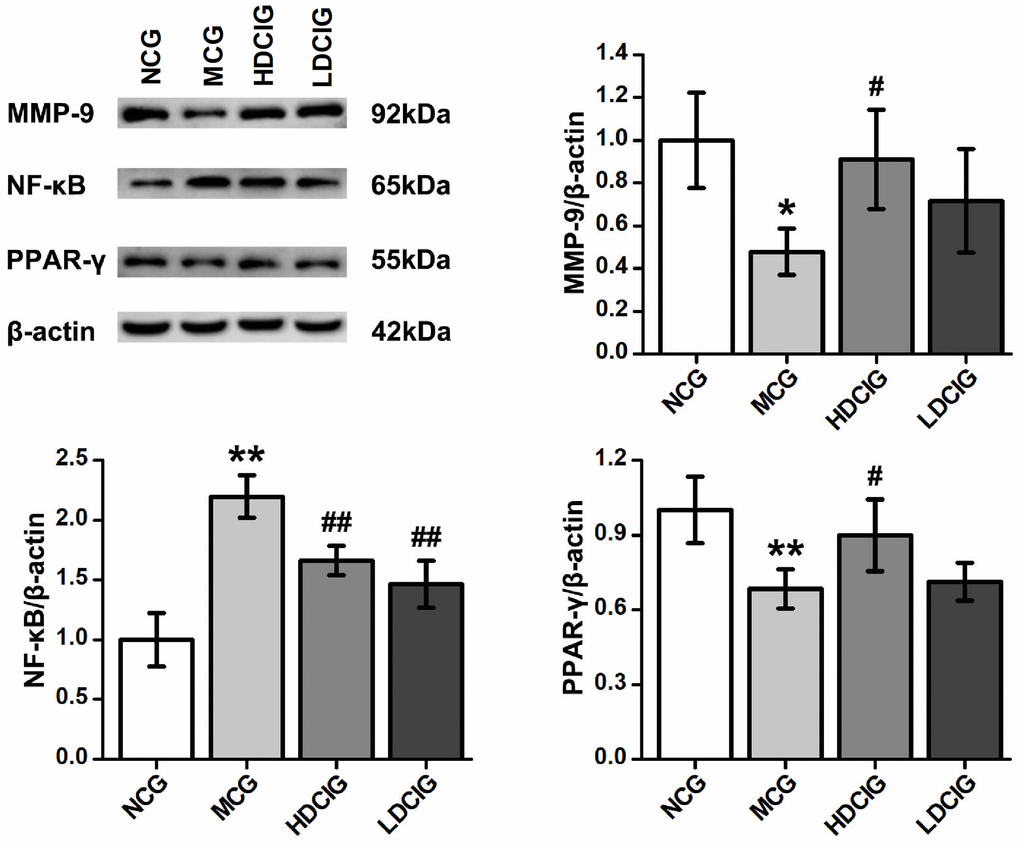 DN is a serious complication associated with the development of diabetes and a major cause of end-stage renal disease [12]. The pathogenesis of DN is closely related to a variety of factors, including glucose and lipid metabolism disorders, hemodynamic abnormalities, oxidative stress, cytokines and inflammatory factors [13]. Many basic research studies have proven that renal fibrosis is the most important process in the progression of multiple chronic kidney diseases (including DN) to end-stage renal disease [14–16].

Renal fibrosis is dominated by tubulointerstitial fibrosis, which may manifest as glomerular sclerosis. Db/db mice are an ideal animal model that spontaneously develops type 2 diabetes [17]. This study investigated the effects of DCI on kidney tissue in db/db mice.

The MMP family is a major factor in the degradation of various ECM components [20], and of in this family, MMP-9 is a key enzyme that regulates ECM degradation [21], and is closely related to the occurrence and development of DN. Abnormal expression of MMP-9 is involved in proteinuria-related kidney diseases, including focal segmental glomerulosclerosis and anti-glomerular basement membrane inflammation [6]. Under high glucose stimulation, the gene expression of multiple mesangial matrix components is upregulated, and ECM synthesis is increased. In addition, MMP-9 expression is affected, and ECM degradation is reduced, promoting the process of renal fibrosis. Therefore, it is important to maintain the normal level of MMP-9. The transcription factor NF-κB is involved in the transcriptional regulation of many adhesion molecules and inflammatory cytokines, such as TNF-α, IL-10, and ICAM-1 [22, 23], so and increased levels of NF-κB leads to inflammatory reactions [24]. PPAR-γ plays an important role in improving insulin resistance, promoting glucose metabolism, lowering blood pressure, inhibiting fat accumulation in the kidney, increasing adiponectin expression, protecting podocytes, inhibiting renal interstitial fibrosis, and exerting anti-inflammatory and antioxidant effects [25–27]. Studies have shown that PPAR-γ inhibits NF-κB signalling by inhibiting the transcriptional activity of NF-κB, thereby inhibiting the expression of inflammatory factors associated with TNF-α [28]. In the current study, we found that DCI certainly enhanced the expression of PPAR-γ and MMP-9, decreased NF-κB activity, and reduced renal fibrosis in mice. These results suggested that enhancing PPAR-γ protein expression ameliorated fibrosis at least in part through by modulating the activity of the NF-κB and the expression of MMP-9. Therefore, based on our results, we speculate hypothesize that DCI protects the kidney by enhancing the expression of PPAR-γ and possibly alleviating renal fibrosis through the NF-κB/ MMP-9 signalling pathway.

After adaptive feeding for 1 week, blood was drawn from the tails of the mice to determine the levels of blood glucose using a blood glucose metre (Roche, USA). Ten db/m mice were selected to establish the normal control group (NCG). Based on the RBG levels, the 30 db/db mice were randomly divided into three groups received different treatments: high-dose DCI group (HDCIG), low-dose DCI group (LDCIG) and model control group (MCG).

The mice in the HDCIG and LDCIG mice received DCI (purity: >98.0 %, I0632, TCI, Japan) at a dose of 70 mg/kg/d and 35 mg/kg/d, respectively. The NCG and MCG mice received an equal volume of pure water. All treatments were administered at 9 a.m. every day, and the duration of the entire experiment was 6 weeks.

RBG measurements were conducted in each group at 0 and 6 weeks used tail vein blood after intragastric administration. Twenty-four hours after the last administration, blood samples were collected from the eye socket, and the serum was separated. Cr and BUN levels were measured using Assayan assay kit (Nanjing Jiancheng Bioengineering Institute, C011-2-1/1/C013-2-1, China) according to the Kit instructions.

After being weighed, 1 mm3 kidney tissue blocks were cut at the renal cortex, fixed with 0.025% glutaraldehyde solution for 12 h, incubated with phosphate buffer -buffered saline (PBS) for 8 h, and incubated with 0.01% osmic acid for 2 h. Then, the samples were rinsed and dehydrated, embedded with Epon 812, sliced (70 nm), and stained with lead citrate. Finally, the samples were observed by transmission electron microscopy (H-7650, Hitachi Limited, Japan).

Immunohistochemistry was performed using a universal two-step test kit (ZSGB-BIO, PV-9000, China). Paraffin-embedded sections of kidney tissues were dewaxed, hydrated, and boiled to repair antigens through ethylenediaminetetraacetic acid (EDTA) high-pressure heating. Following a wash with PBS, the sections were soaked with serum (ZSGB-BIO, ZLI-9022, China) and incubated with the following primary antibodies: anti-MMP-9 (E-11) (1:300, Santa Cruz, sc393859, USA), anti-PPAR-γ (1:200, Santa Cruz, sc7273, USA) and anti-NF-κB (1:200, Santa Cruz, sc8008, USA). After being incubated at 4°C overnight, the sections were incubated with the secondary antibody provided by the kit at 37°C. After being washed with PBS, the sections were dyed using 3,3′-diaminobenzidine (ZSGB-BIO, ZLI-9018, China) for 50 s. The nucleus was stained with hematoxylin for 1 min. In the negative control group, PBS was used instead of primary antibodies in the experiments. Finally, the positive proteins were colored brownish yellow, and the expression and distribution of indicated proteins were observed under a light microscope. The average integral absorbance was determined using Image-Pro Plus 6.0 software.

The experiments were approved by the Animal Ethics Welfare Committee of North China University of Science and Technology.