Copyright: © 2022 Jiang et al. This is an open access article distributed under the terms of the Creative Commons Attribution License (CC BY 3.0), which permits unrestricted use, distribution, and reproduction in any medium, provided the original author and source are credited.

Background: Glioma is a lethal malignant brain tumor, it comprises about 80% of all malignant brain tumours. Mounting evidence has reported that YTHDF2 plays a significant role in the cancer progression. However, the effects of YTHDF2 on the prognosis of low-grade gliomas (LGGs) and its correlation with tumor immune infiltration are unclear. The present study was designed to determine the biological functions of YTHDF2 in glioma and to evaluate the association of YTHDF2 expression with glioma progression.

Methods: Clinical data on patients with glioma were obtained from The Cancer Genome Atlas (TCGA), the Chinese Glioma Genome Atlas (CGGA), the Gene Expression Omnibus (GEO), as well as the Rembrandt and Gravendeel databases. The correlations among YTHDF2 expression, pathological characteristics, glioma progression and clinical outcome were evaluated. In addition, the correlation of YTHDF2 expression with immune cell infiltration was analyzed too.

Results: We found that YTHDF2 was significantly up-regulated in LGGs which correlated with tumor grade and poor prognosis. Interestingly, we showed that YTHDF2 expression in LGG was associated with copy number variation, DNA hypomethylation, and induced transcription factor YY1. Besides, KEGG pathway analysis shows that YTHDF2 mainly participates in the immune response and oncogenic signaling pathway. Additionally, YTHDF2 is positively associated with diverse immune cells infiltration, immune cells, and multiple immune checkpoint molecules. Finally, we confirmed that YTHDF2 was highly expressed in LGGs tissues and correlated with the tumor grade with immunohistochemistry assay. More importantly, our results demonstrated that YTHDF2 was elevated in GBM cells. Knockdown of YTHDF2 significantly inhibits the proliferation and migration of GBM cells.

Conclusion: YTHDF2 correlates with glioma progression and immune cell infiltration, suggesting that YTHDF2 may be a useful prognostic biomarker for glioma.

Glioma is the major type of the brain malignancy, its incidence rate and mortality continue to rise [1]. Gliomas are mainly comprised of low-grade gliomas (LGGs) and glioblastoma multiform (GBM). Although currently there are different treatments for glioma, the survival rate and prognosis of cancer patients is disappointing [2]. Therefore, identifying new biomarkers is crucial for the management of glioma.

RNA m6A modification is a regular mRNA modification, it was first identified in the 1970s [3]. Accumulating evidence demonstrated that YTHDF2, as a member of m6A reader protein, plays a crucial role in RNA metabolism and cancers progression [4]. For example, it has been confirmed that YTHDF2 was up-regulated in HCC and correlated with adverse clinical outcomes in patients [5]. However, there was no study on its expression level and immune roles in glioma.

Analysis of the expression and prognosis of YTHDF2

In this study, we used GSEA software to explore the signaling pathway involved by YTHDF2 in glioma. TIMER (https://cistrome.shinyapps.io/timer/) [9]. TIMER was used to determine the relationship between YTHDF2 expression and immune cell infiltration in glioma.

In this study, we used the GDSC and CTRP databases to explore the correlations between YTHDF2 and various drug sensitivity [13, 14].

The glioma cell line was purchased from the cell bank of Kunming Institute of Zoology and cultured in DMEM medium (Corning, USA) supplemented with 10% fetal bovine serum (FBS) and 1% penicillin/streptomycin. The RT-PCR primers shown in the following, YTHDF2-F: AGCCCCACTTCCTACCAGATG, YTHDF2-R: TGAGAACTGTTATTTCCCCATGC; β-actin-F: CTTCGCGGGCGACGAT, β-actin-R: CCATAGGAATCCTTCTGACC. The expression quantification was obtained with the 2−ΔΔCt method. The shRNA primer used in this study following: shYTHDF2-1: CCTACTTACCCAGTTACTACA, shYTHDF2-2: GCTCTGGATATAGTAGCAATT.

Expression and prognostic values of YTHDF2 in human cancers 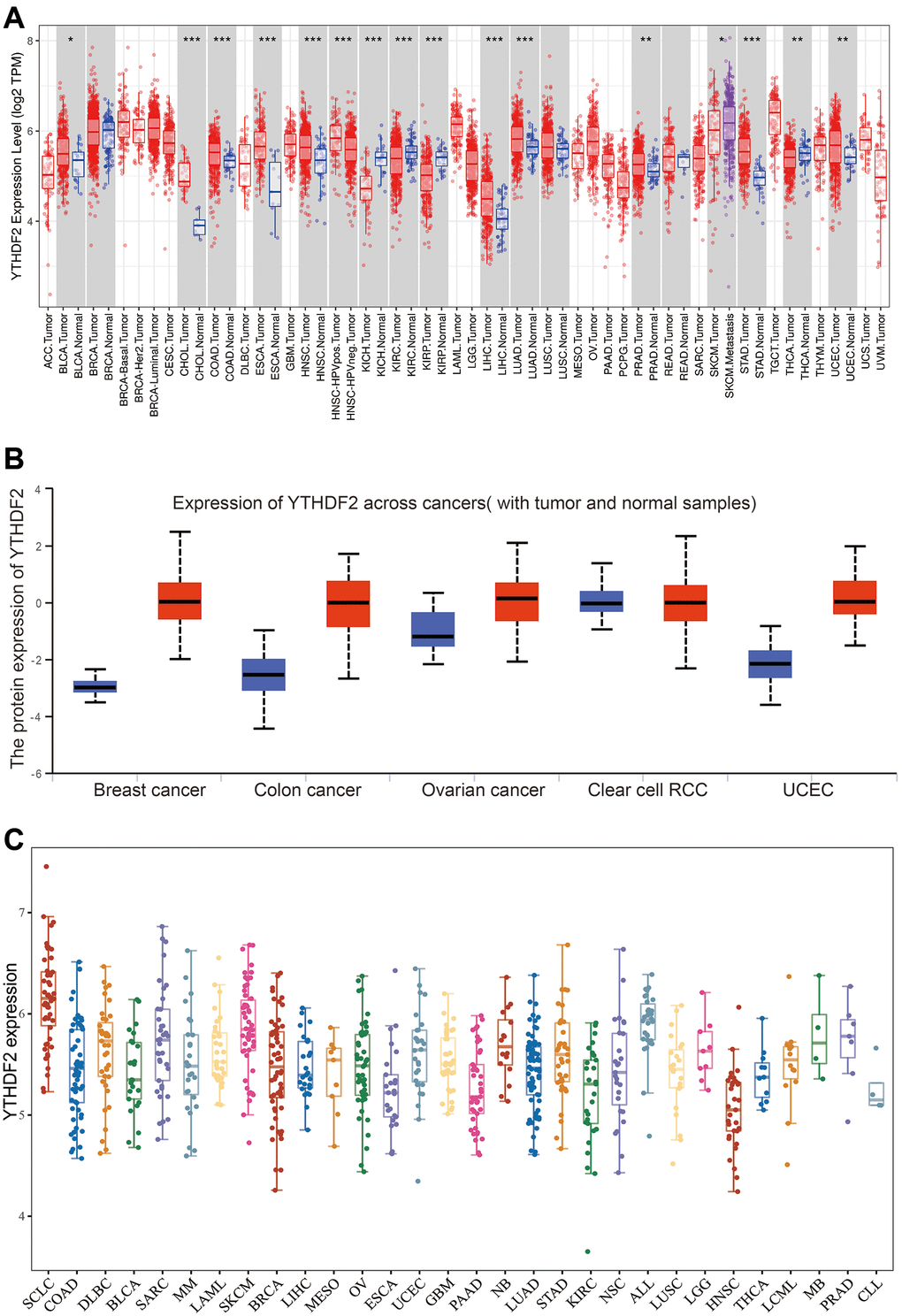 We employed KM plot to explore the prognostic value of YTHDF2 expression in human cancer. Our results confirmed that higher level of YTHDF2 overexpression closely correlates to the poor clinical prognosis of LIHC, SARC, and LGG. On the contrary, up-regulation of YTHDF2 correlated with a better prognosis in BLCA, CESC, KIRC, LUAD, and OV (Figure 2). 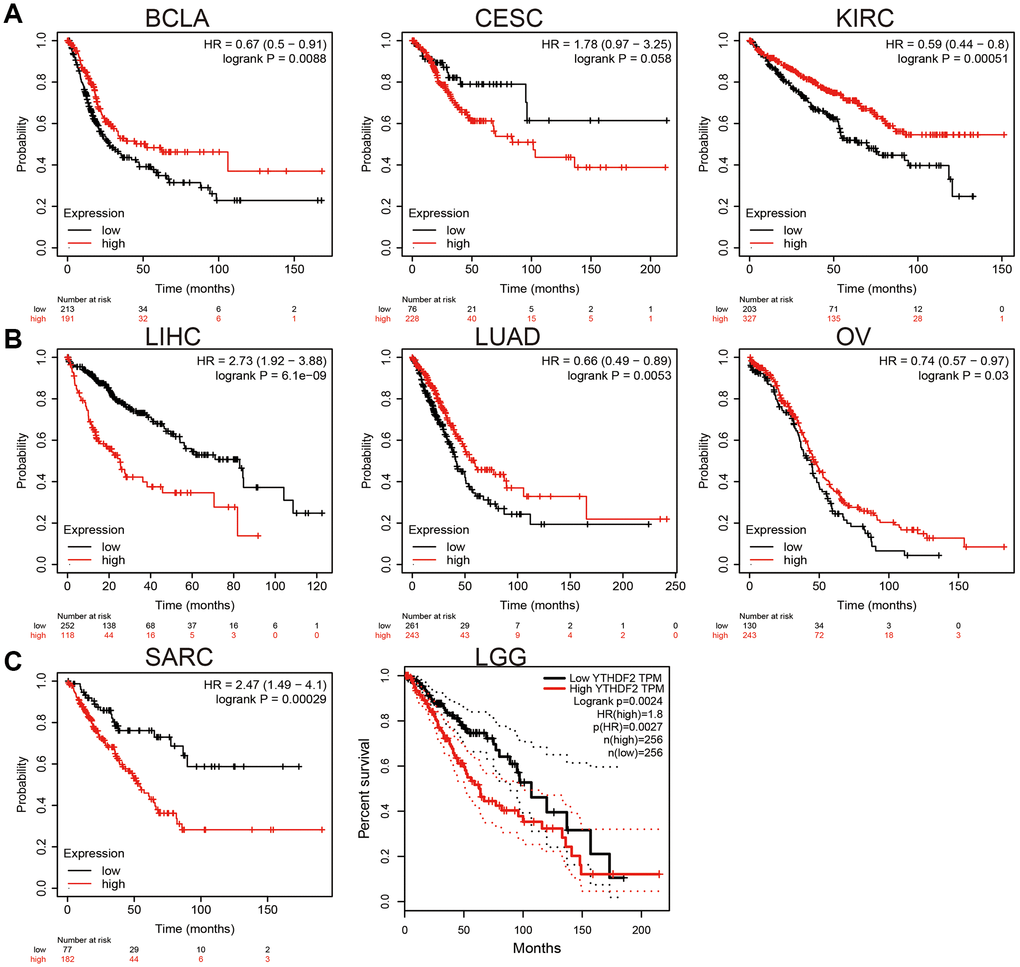 YTHDF2 was up-regulated in LGG 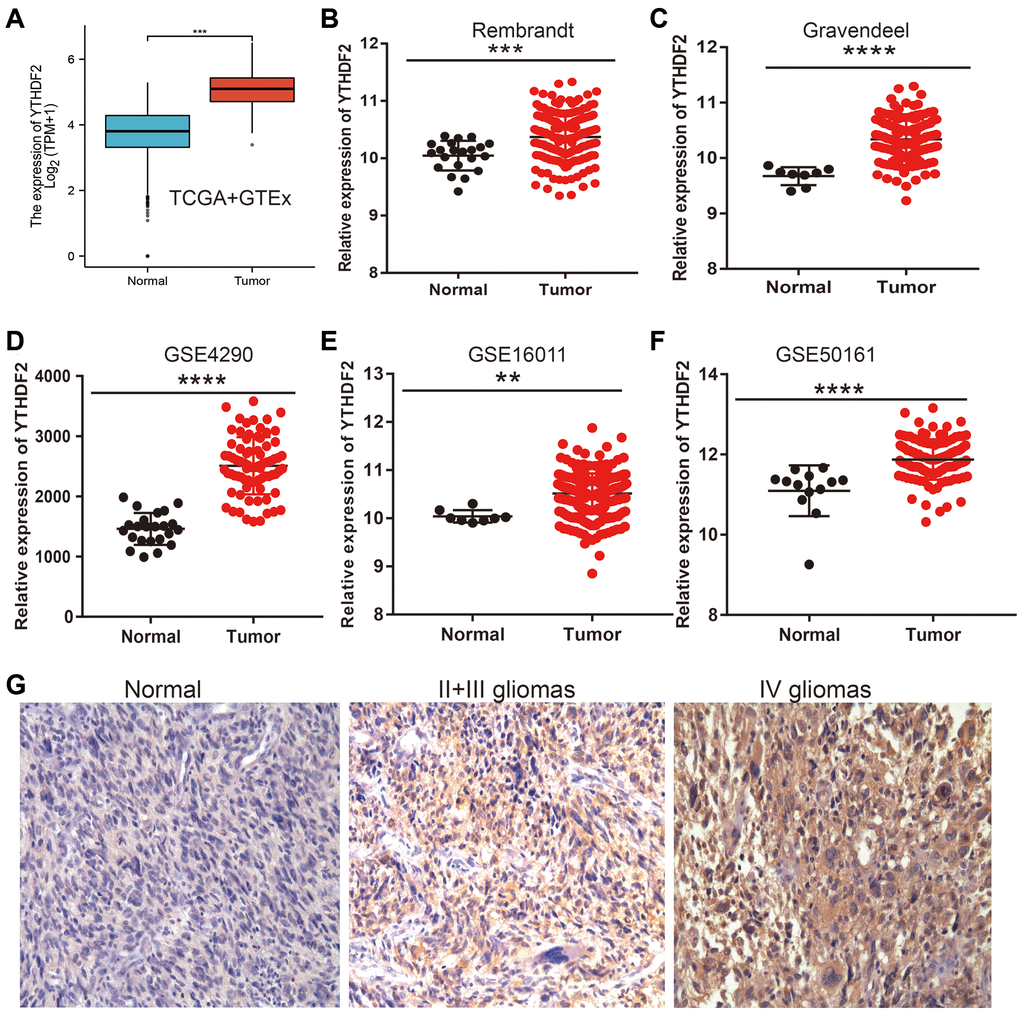 Figure 3. YTHDF2 was the high expression in LGG. (A–F) The YTHDF2 expression is significantly regulated in glioma examined by the TCGA (A), Rembrandt (B), Gravendeel (C), and GEO datasets (D–F). (G) The immunohistochemistry detection of YTHDF2 in Normal brain tissue, LGG, and HGG.

Next, we examine the relationship between YTHDF2 expression and clinical features in LGG. Results confirmed that YTHDF2 differential expression in different histology subtypes (Figure 4A). Additionally, the YTHDF2 expression level was increased with the tumor grade elevated (Figure 4B). We also found that YTHDF2 was markedly reduced in the IDH mutation group and the 1p/19q chromosome co-deletion group (Figure 4C, 4D). Interestingly, YTHDF2 was down-regulation in patients over 40 years old (Supplementary Figure 1A, 1B). 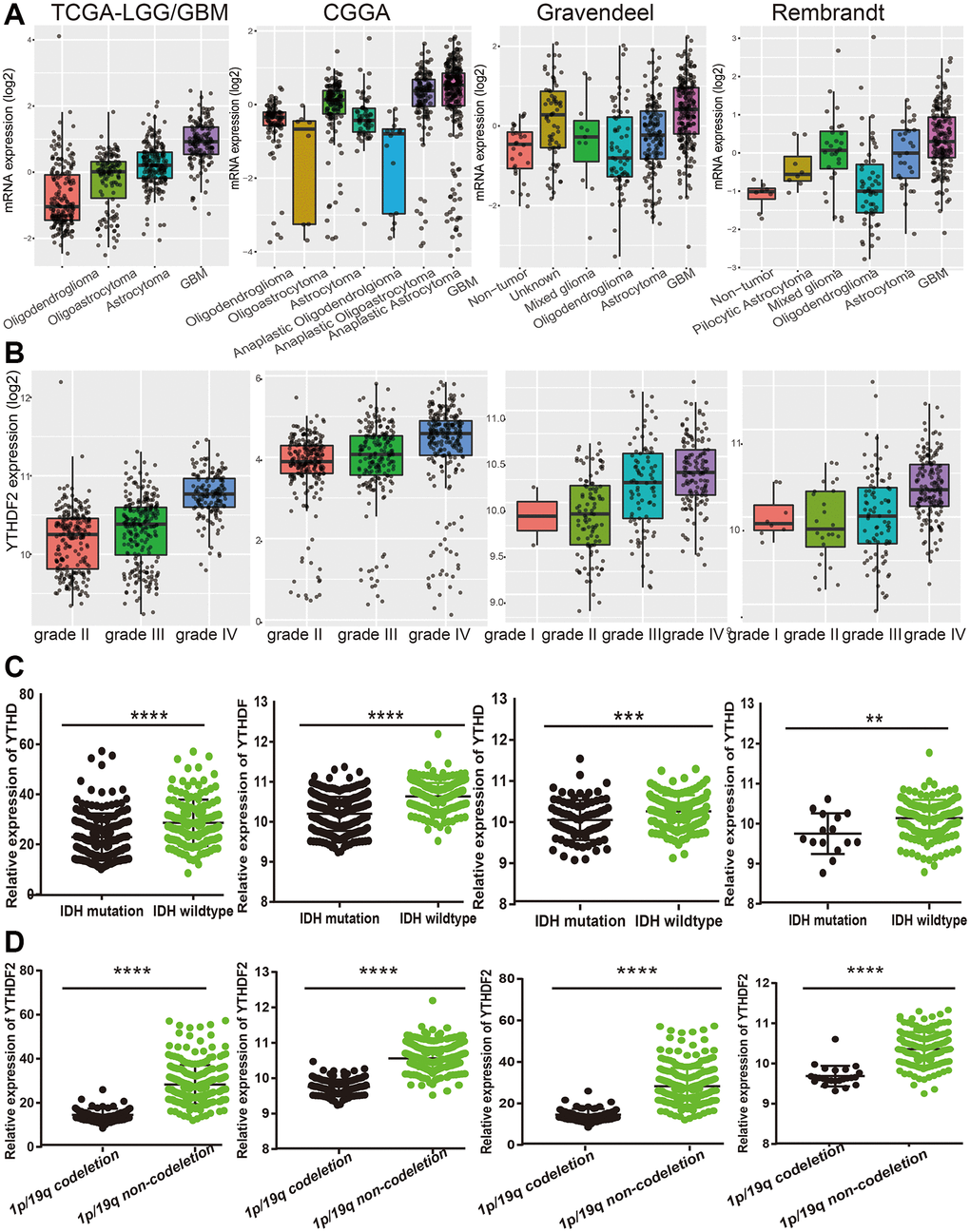 We found that up-regulation of YTHDF2 was correlated with the unfavorable prognosis of glioma patients in different datasets (Figure 5A–5F). Additionally, we perform the ROC curves analysis showed that the area under the curve (AUC) of YTHDF2 were 0.773, 0.815, and 0.789 for the TCGA-LGG datasets (Figure 5G), 0.797, 0.832, and 0.702 for the CGGA datasets (Figure 5H) in 1, 3, and 5 years, respectively. In GBM, the overall of patients no significant difference between high and low YTHDF2 group (Figure 5I). ROC curve of YTHDF2 show an AUC value of 0.982 and 0.931 based on the TCGA-GBM and TCGA-LGG dataset (Figure 5J). 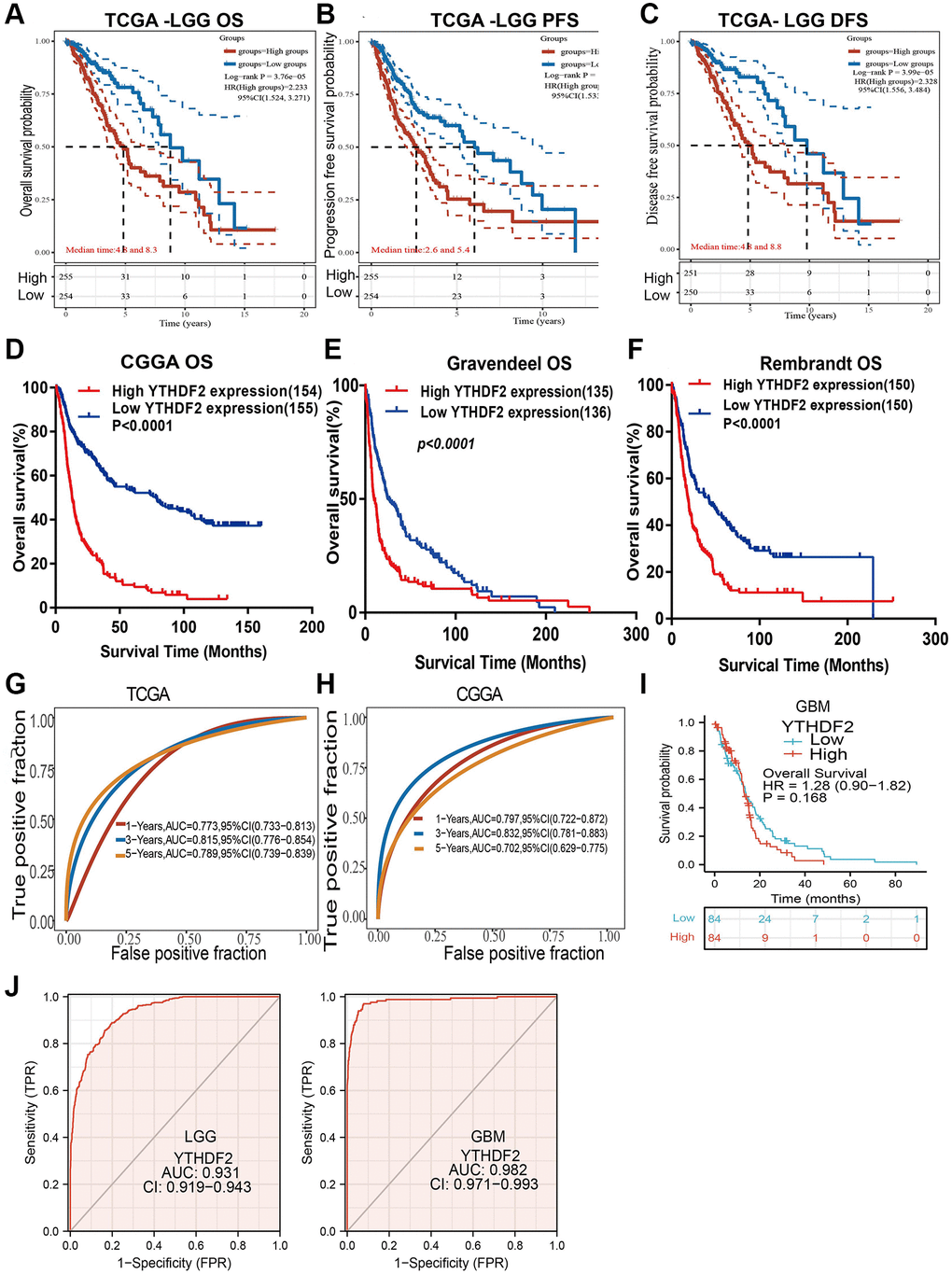 DNA methylation plays a crucial role in the regulation of gene expression. To elucidate the abnormal up-regulated mechanisms of YTHDF2 in LGG tissues, we further examine the relationship between DNA methylation, CNV, and the expression of YTHDF2 in gliomas. Firstly, we found that CNV of YTHDF2 was positively correlated with the expression (r = 0.798, p < 0.0001) (Figure 6A). Furthermore, we confirmed that various methylation sites in the promoter region of YTHDF2, among these methylation sites, the cg28734000 was negative correlated with the expression of YTHDF2 in LGG (r = 0.–0.556, p < 0.0001). CGGA dataset also obtained same results (Figure 6B, 6C). 5-Azacytidine, as an inhibitor of DNA methyltransferase [16], was used to treat the U251 cells, the results show that inhibiting the DNA methylation could significantly enhance YTHDF2 RNA levels in U251 cells (Figure 6D). Finally, we uncovered that lower methylation levels on the cg28734000 site correlate with adverse clinical outcomes in the TCGA-LGG dataset examined by the measure database (Figure 6E). 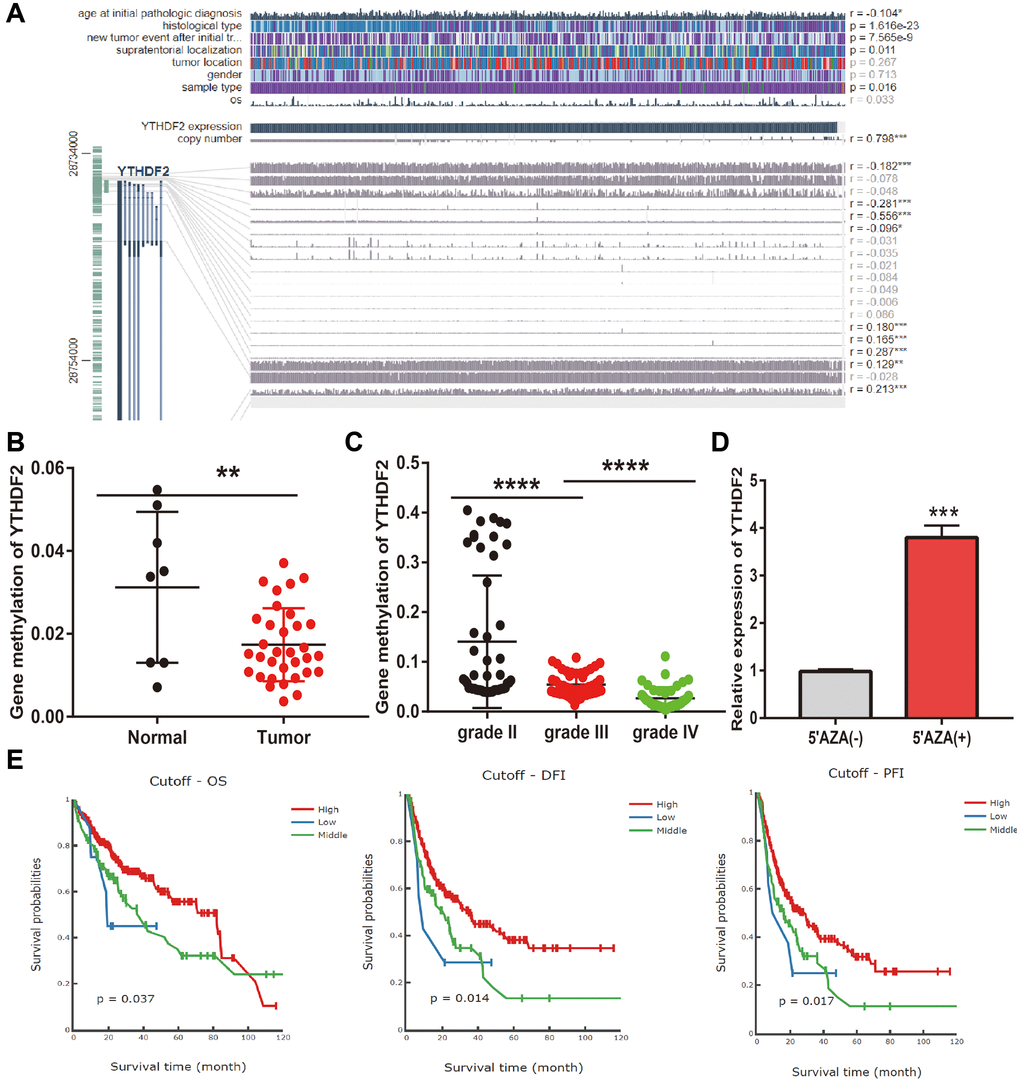 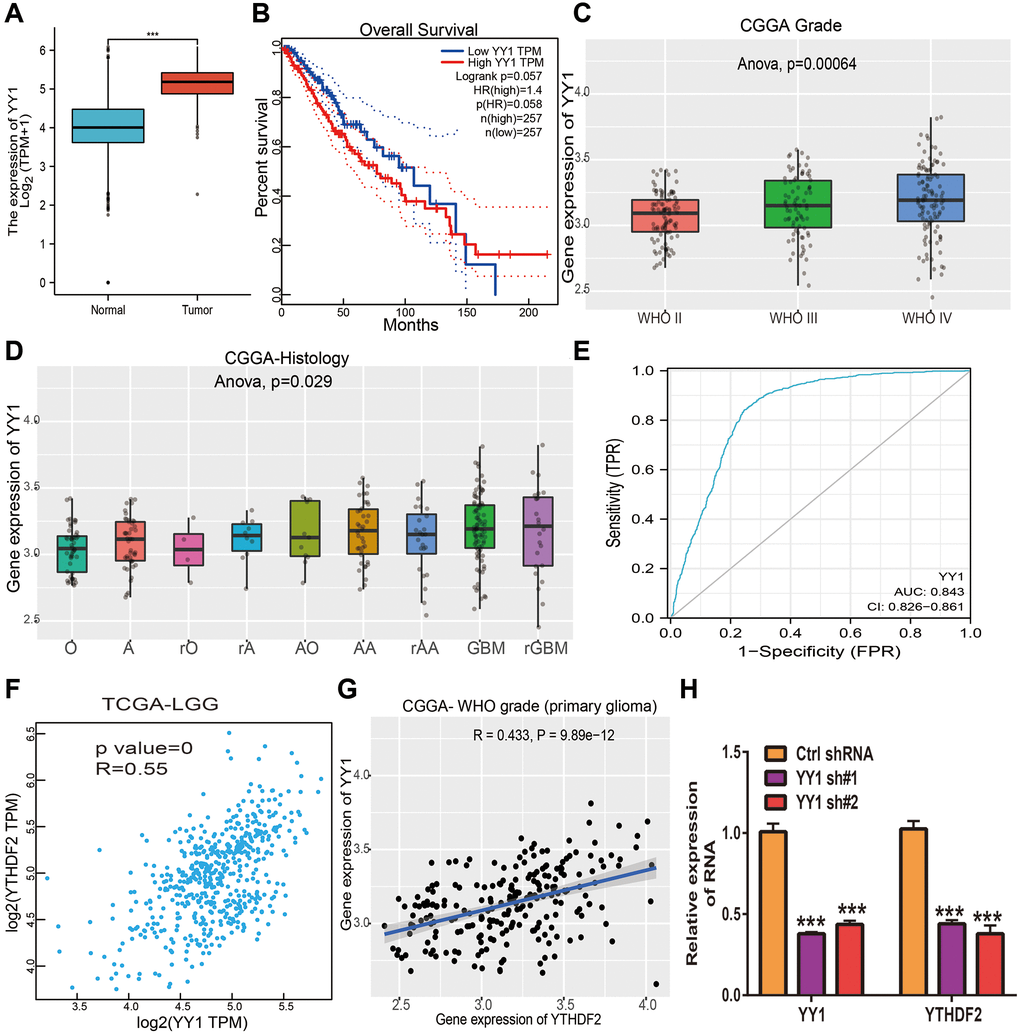 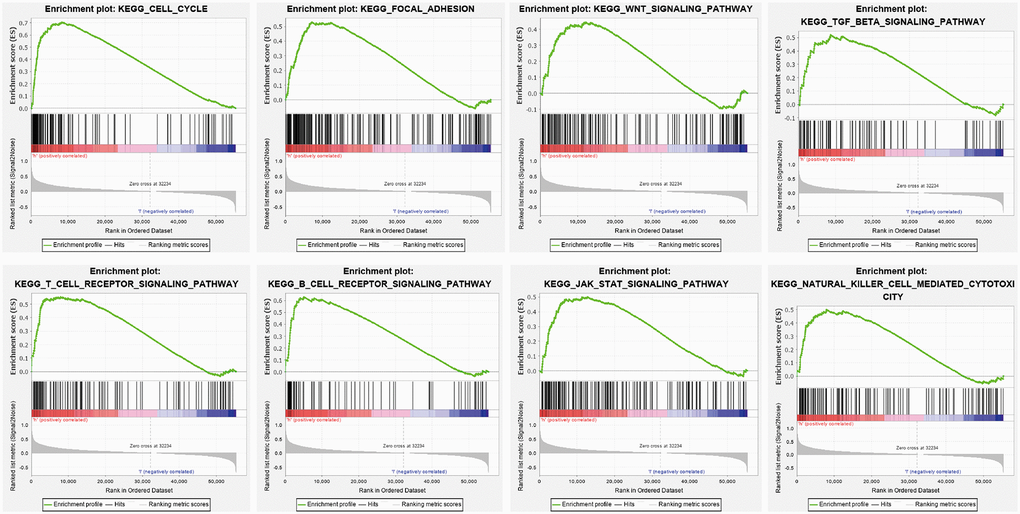 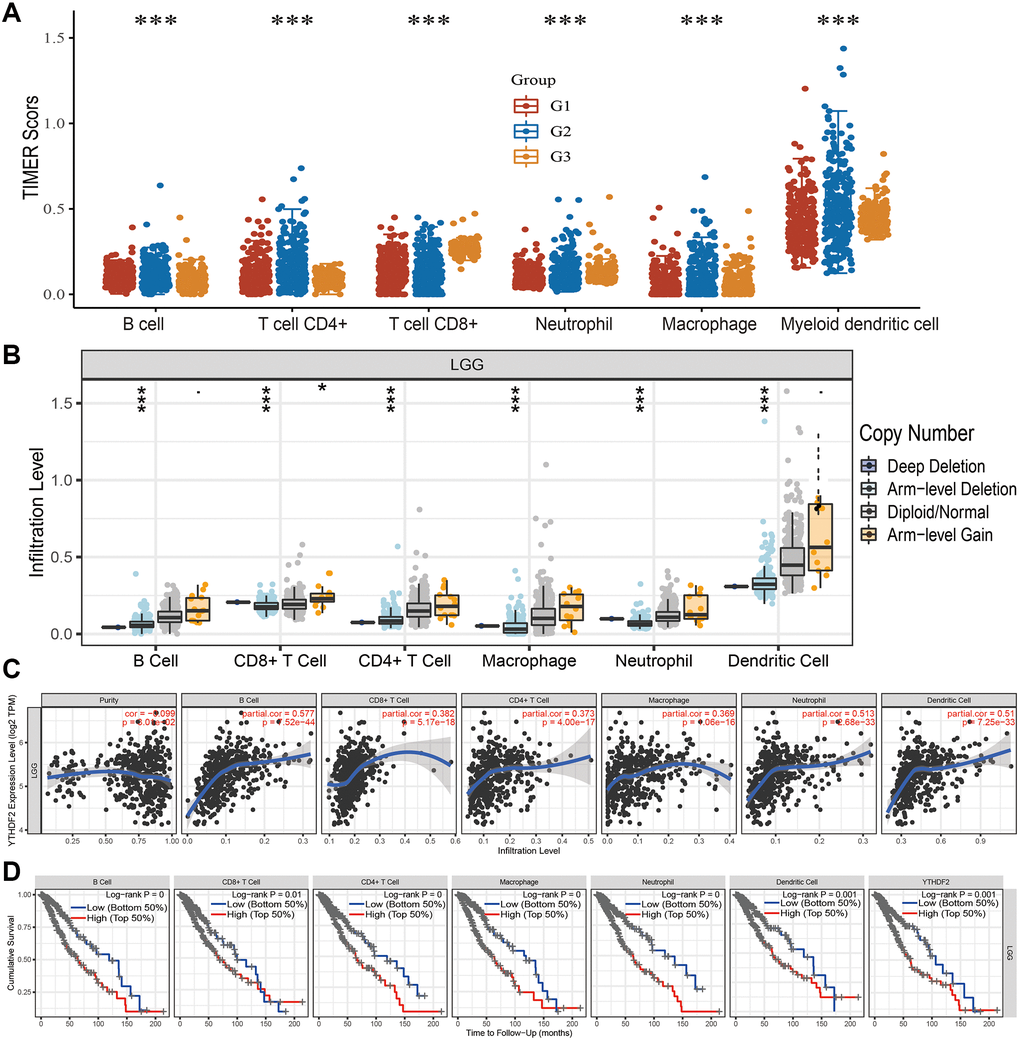 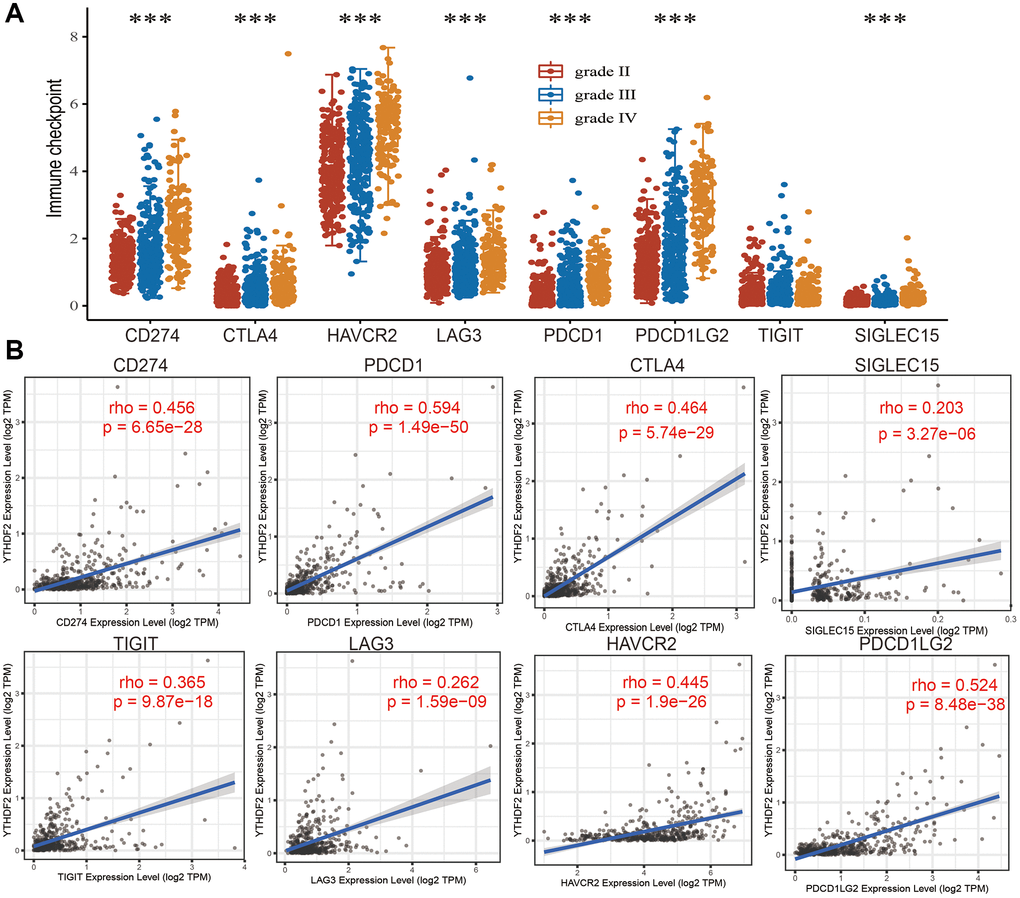 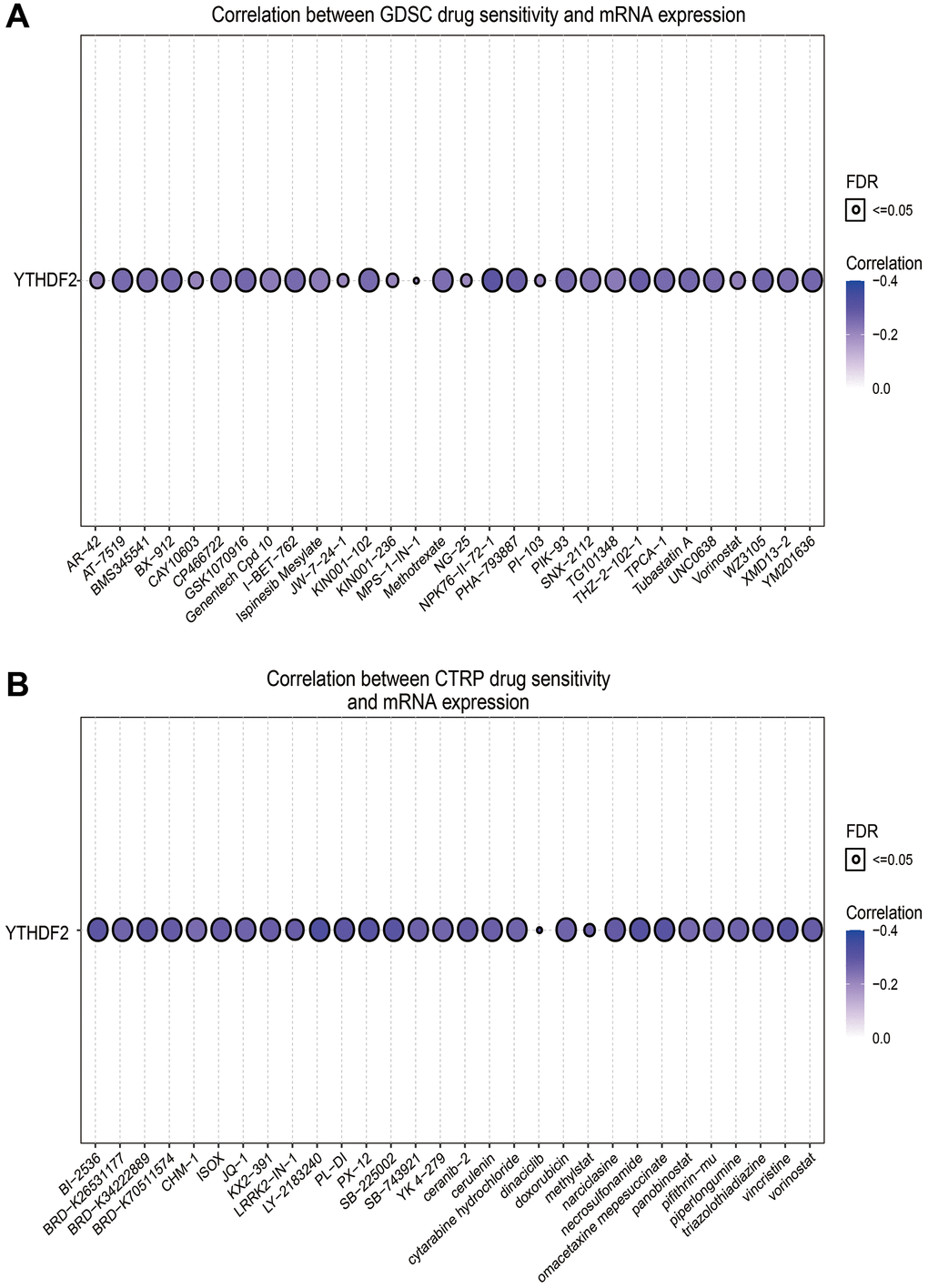 Knock down of YTHDF2 inhibited cell proliferation and migration 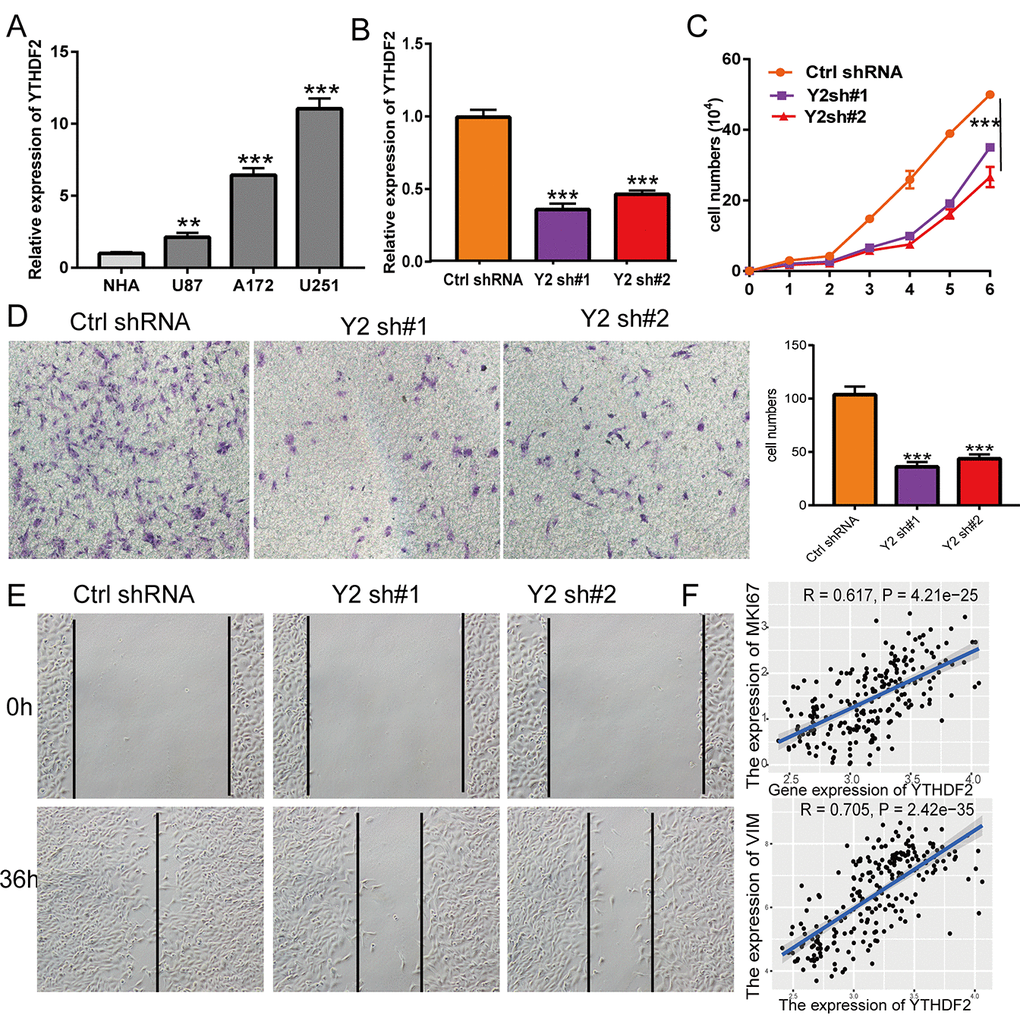 YTHDF2, a member of the m6A reader proteins containing the YT521-B homology (YTH) domain family, has been reported to play important roles in cancer progression. We found that YTHDF2 expression was up-regulated in glioma and its high expression was correlated with the tumor grade and poor prognosis in LGG. ROC curve confirmed that the YTHDF2 expression level has diagnostic value for gliomas.

Mounting evidence has demonstrated that the TME plays an important role in glioma progression [17]. Here we found that a strong positive relationships between YTHDF2 expression level and various immune cell infiltration. We also investigated the correlations between YTHDF2 expression and immune checkpoint. YTHDF2 levels demonstrated strong correlations with multiple immune checkpoint molecules, such as CD274 and CTLA4.

The authors would like to thank support from The First Affiliated Hospital of Kunming Medical University, Kunming, China.