Copyright: © 2022 Wu et al. This is an open access article distributed under the terms of the Creative Commons Attribution License (CC BY 3.0), which permits unrestricted use, distribution, and reproduction in any medium, provided the original author and source are credited.

Diabetic kidney disease (DKD), is one of the most common vascular diseases caused by diabetes, eventually progressing into glomerular sclerosis. Qidantang Granule is a traditional Chinese medicine that is commonly used for DKD. However, there is still no experimental evidence for its effectiveness on DKD. 8-week-old Sprague Dawley male rats were fed on high-fat and high-sugar diet for 4 weeks, and then intraperitoneally injected with 35 mg/kg streptozotocin (STZ) to induce diabetes. Diabetic rats were randomly divided into three groups, and orally administrated with vehicle, 50 mg/kg or 200 mg/kg Qidantang Granule respectively, once daily for 9 weeks. Qidantang Granule effectively reduced food and water intake, body weight and fasting blood glucose, decreased inflammation and oxidative stress, ameliorated renal injury through suppressing PI3K signaling pathway in STZ-induced DKD rats. Our results provide experimental evidence to demonstrate the pharmacological mechanism of Qidantang Granule in the treatment of DKD.

Diabetic kidney disease (DKD), is one of the most common vascular diseases caused by diabetes, eventually progressing into glomerular sclerosis [1, 2]. DKD is characterized by diffuse thickening of the glomerular basement membrane, and morphological changes such as mesangial matrix proliferation and expansion, leading to renal insufficiency [3, 4]. Without proper and timely treatment, DKD will eventually develop into end-stage renal disease (ESRD). Moreover, DKD is also a major cause of mortality and morbidity in diabetic patients all over the world [5]. According to the latest statistics from World Health Organization, about 40% of diabetic patients will suffer from DKD [6]. The common treatment of DKD includes intensive hypoglycemic and application of angiotensin-converting enzyme inhibitor (ACEI), angiotensin-receptor blockers (ARB) or other drugs to control hypertension, or lower lipid. However, the outcome of these strategies is unsatisfied. Therefore, new candidate drugs for treating DKD need to be developed and explored to attenuate the progression of DKD.

Previous publications have shown that persistent hyperglycemia of patients with diabetes altered hemodynamics and induced oxidative stress in the peripheral blood, therefore leading to severe damage to local renal cells, including podocytes and glomerular capillary endothelial cells [7]. Among these cells, podocytes are terminally differentiated cells, which play an important role in the glomerulus [8, 9]. Due to terminal differentiation, podocytes can’t regenerate once damaged. Hyperglycemia causes hypertrophy and detachment of podocytes. Therefore, the amounts of epithelia cells in urine as the biomarker of early stage of DKD is a better biomarker than albumin amounts in the urine [10]. Moreover, avoiding podocyte damage was believed as the key to prevent the occurrence of DKD [11].

Traditional Chinese Medicine (TCM) has been applied to treat DKD in clinical practice for a long time, and it has been approved to effectively attenuate symptoms of DKD, reduce proteinuria, and delay the progression of end-stage uremia [12, 13]. Qidantang Granule is a common TCM to treat early stage of DKD. Our group has been worked on the clinical and experimental research of Qidantang Granule in the treatment of early stage of DKD for almost 20 years, and establishes a relatively mature therapeutic plan, which was supported by the results of clinical trial (ChiCTR220005601). However, its detailed mechanisms remain largely unknown. Therefore, our current study aimed to explore the protective effect of Qidantang Granule on podocytes in DKD rats, to provide theoretical and experimental evidence of Qidantang Granules in the treatment of early DKD.

DKD rat model was performed as previously described [14]. Briefly, 8-week-old Sprague Dawley male rats were fed on high-fat and high-sugar diet for 4 weeks, and then intraperitoneally injected with 35 mg/kg streptozotocin (STZ). After 3 days, rats with >13.9 mmol/L fasting blood glucose and >16.7 mmol/L blood glucose were selected as diabetic rats. Diabetic rats were randomly divided into three groups, and orally administrated with vehicle, low-dose (50 mg/kg) or high-dose (200 mg/kg) Qidantang Granule respectively, once daily for 9 weeks after the success establishment of DKD model. Fasting blood glucose, body weight, food and water intake were monitored every week for 9 weeks. Then 24 h urine, blood samples and kidney tissues were collected. Blood glucose was measured using a glucometer (Accu-Check Active, Roche). All the animal experiments were approved by the ethics committee of Longhua Hospital, Shanghai University of TCM.

The rats were placed in the promethion cages individually and 24 h urine was collected. 3 mL of urine was centrifuged at 3,000 rpm for 10 min at 4° C, then supernatant was collected and analyzed by an automatic biochemical analyzer (Olympus, Japan) to determine the 24 h microalbumin (mALB) in urine and albumin/creatinine ratio (ACR). 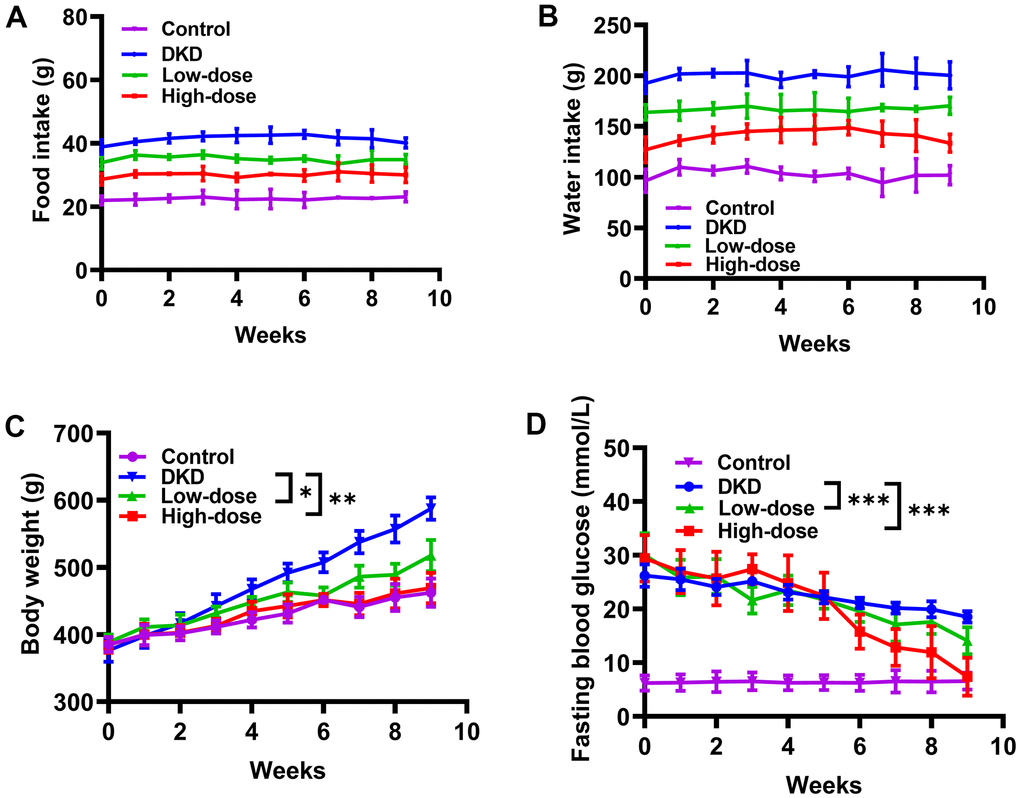 Compared to control group, STZ injection significantly impaired kidney function in rats, evidenced by the increased biomarkers in the serum, including serum creatinine (sCr) (Figure 2A), blood urea nitrogen (BUN) (Figure 2B), total cholesterol (TC) (Figure 2C) and triglyceride (TG) (Figure 2D), and the upregulated biomarkers in the urine, such as albumin-to-creatinine ratio (ACR) (Figure 2E) and 24 h microalbumin (24 h mALB) (Figure 2F). All these biomarkers could be dose-dependently reduced by Qidantang Granule in DKD rats. 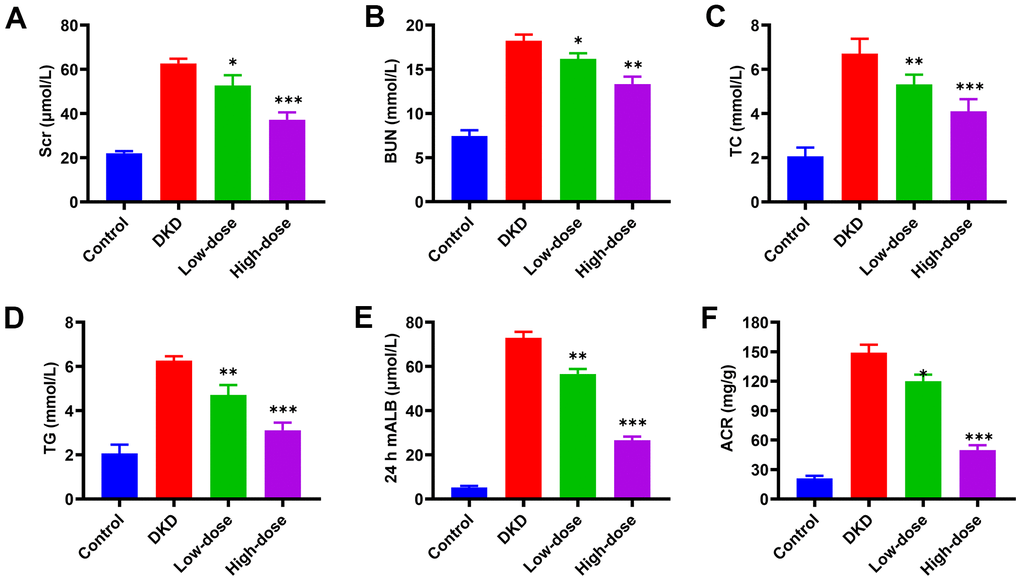 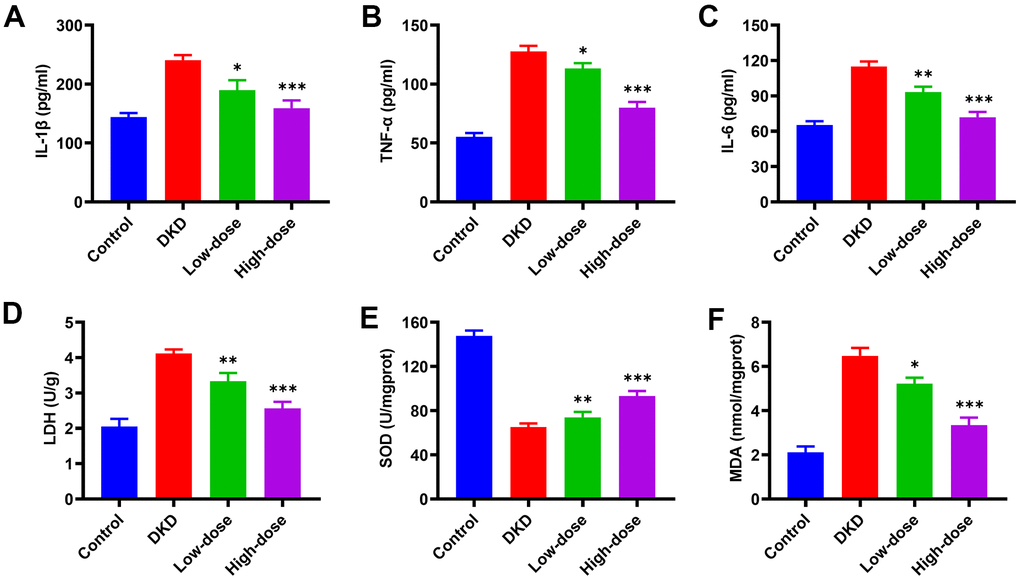 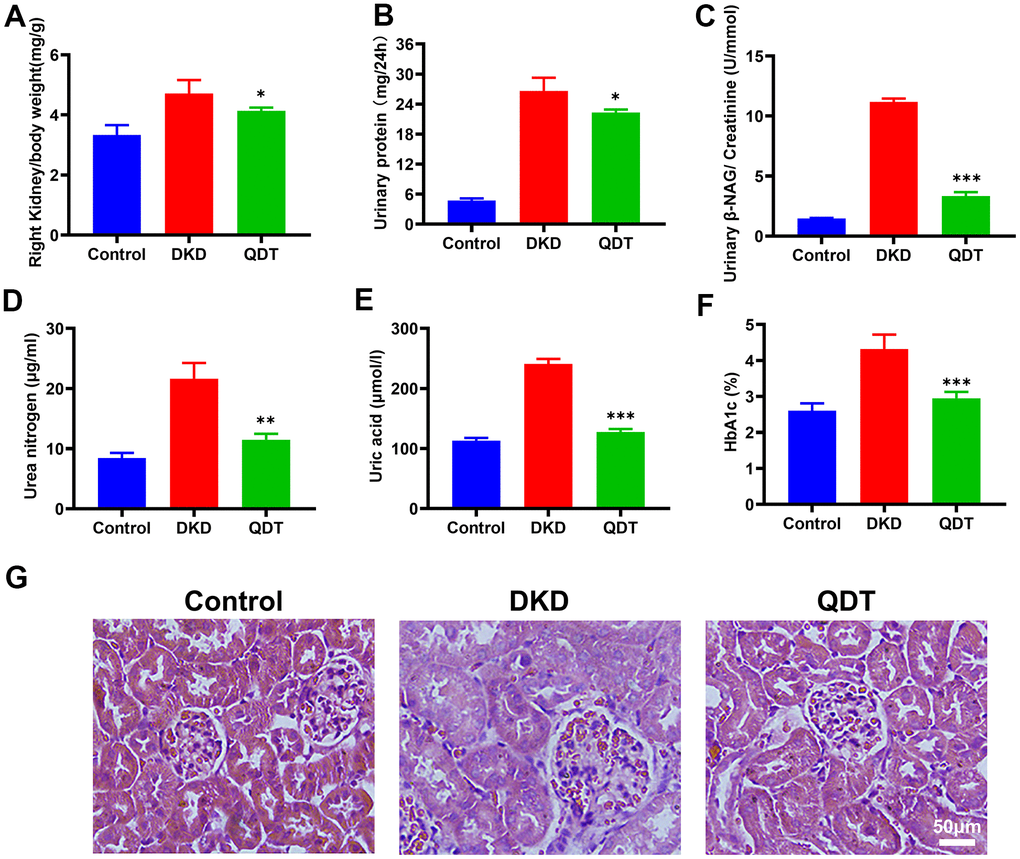 Next, we explored the detailed mechanism of its protective effect on DKD. We observed that mRNA levels of podocytes markers, such as nephrin (Figure 5A) and podocin (Figure 5B), were reduced with the increased mRNA level of muscle marker, desmin (Figure 5C), which suggested that podocytes were reduced in the kidney of DKD rats and restored by high dose of Qidantang Granule. Moreover, DKD activated PI3K signaling pathway in the kidney, as reflected by the increased protein levels of p-PI3k, p-AKT, and p-mTOR, were significantly restored by Qidantang Granule (Figure 5D–5G). These data indicated that Qidantang Granule ameliorated podocytes and renal injury by inhibiting PI3K/Akt/mTOR signaling pathway in DKD rats.

Our study used STZ injection to induce DKD in rats. DKD rats displayed increased body weight, food intake, water intake and fasting blood glucose, which was consistent with previous publications. Our results revealed that Qidantang Granule dramatically decreased food and water intake but had no effects on body weight and fasting blood glucose levels at the beginning of treatment. However, as treatment continued, body weight and fasting blood glucose levels of DKD rats were gradually decreased after 4 weeks, and further decreased in the following weeks. This result indicated that Qidantang Granule did not act immediately, and it was a long-term accumulation for at least one month. Additionally, this data also demonstrated that beside renal injury, Qidantang Granule might also have protective effect on diabetes.