Aging-US published "Development of infrastructure for a systemic multidisciplinary approach to study aging in retired sled dogs" which reported that canines represent a valuable model for mammalian aging studies as large animals with short lifespans, allowing longitudinal analyses within a reasonable time frame.

Moreover, they develop a spectrum of aging-related diseases resembling that of humans, are exposed to similar environments, and have been reasonably well studied in terms of physiology and genetics. To reduce variability even further, the authors have collected a population of 103 retired sled dogs from multiple North American kennels in a specialized research facility named Vaika. In addition, they assess the development of age-related diseases such as arthritis and cancer.

While, in large part, this has been through the development of improved treatments for specific diseases, we are also continually gaining insights into the mechanisms of aging itself. 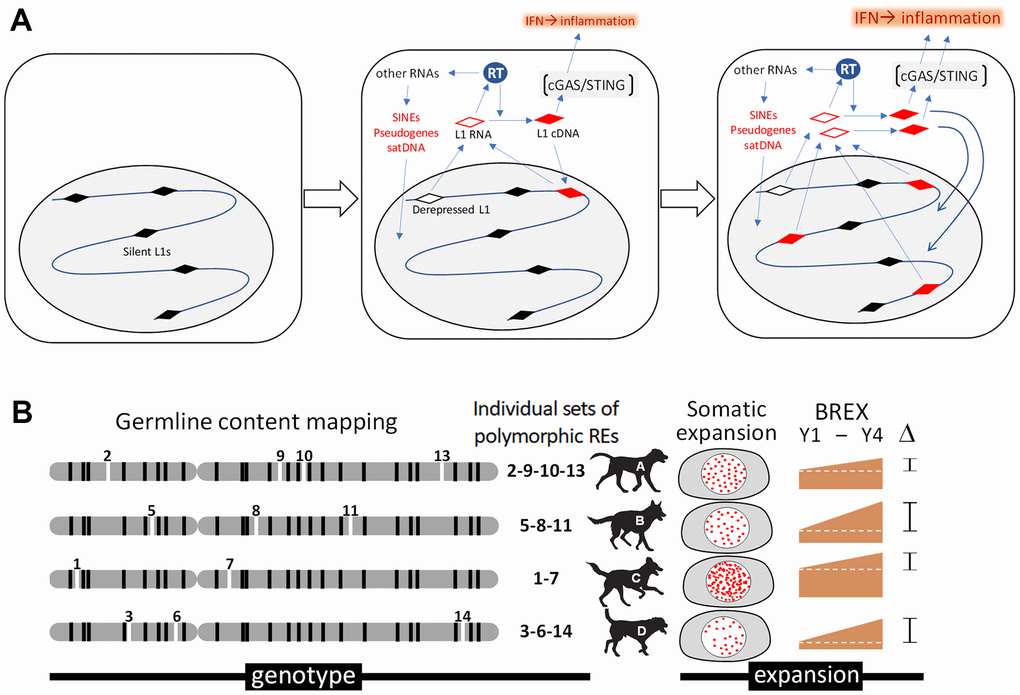 Figure 3. Analysis of retrotransposons in somatic cells of aging dogs. (A) Schematic depiction of a hypothetical connection between retrotransposon expansion and inflammaging. Activity of the reverse transcriptase (RT) encoded by LINE-1 (L1) retrotransposons results in insertional mutagenesis and cGAS-STING-mediated interferon type I (IFN) response and inflammation. (B) Illustration of our approach assessing the association between retrotransposon content and aging. Mosaicism in retrotransposon content among blood cells during aging will be assessed through computational bioinformatic analysis of data from whole genome sequencing of DNA isolated from the same dog at 2-year intervals. Determination of germline SINE and LINE-1 contents for individual dogs (shown as “genotype” for individual dogs, A-D) will be followed by quantitation of novel somatic copies of retrotransposons (new insertions indicated as “somatic expansion”). This will allow us to establish a Blood Retrobiome Expansion index (BREX) reflecting the number of somatic integrations in each DNA sample that can be tracked over time (e.g., ΔBREX between years 1 and 4 (Y1-Y4) in the figure) and compared with biological age assessment approaches based on DNA methylation and senescence marker analyses.

With this growing depth of knowledge, aging is no longer considered an untouchable law of nature but rather a physiological challenge that may be defeated by science and medicine. Thus, extending aging research towards more relevant experimental models is desperately needed.

In this regard, the canine model provides multiple advantages. Compared to mice, the aging of dogs resembles that of humans much more closely. Thus, it is gratifying to see aging studies increasingly performed in canine models.

The use of canines for aging studies works towards the obvious goal of prolonging the healthspan of humans and addresses the potential for extending the healthy years of humans’ closest companions – domestic dogs.

The use of canines for aging studies works towards the obvious goal of prolonging the healthspan of humans and addresses the potential for extending the healthy years of humans’ closest companions – domestic dogs.

They expect that these analyses will allow us to characterize the mechanism and regulation of canine aging, identify parameters and biomarkers suitable for assessment of biological age, and define factors that may act as aging accelerators or decelerators. This should allow robust estimation of the efficacy of anti-aging treatments in future trials based on biomarker responses without waiting for animals to reach their ultimate lifespan.

Iron is intimately associated with aging, and control of body iron stores may be an important way to extend human lifespan."