This increase in ASAH1 levels in senescence is associated with a rise in the levels of ASAH1 mRNA and a robust increase in protein stability.

This increase in ASAH1 levels in senescence is associated with a rise in the levels of ASAH1 mRNA and a robust increase in protein stability.

Dr. Kotb Abdelmohsen from The National Institutes of Health said, "Senescence is a phenotype associated with indefinite growth arrest of the cell, first observed by Hayflick."

Senescent cells can be induced by telomere shortening, genomic injury, epigenomic damage, signaling from oncoproteins, and other sublethal stresses. The transgene INK-ATTAC was used in mouse models for the inducible clearance of p16-positive senescent cells leading to an improvement in age-associated pathologies such as sarcopenia, loss of adiposity, cataracts, and osteoarthritis. In mice, first-generation senolytic drugs were used successfully to clear senescent cells in atherosclerosis and neurodegeneration. Ongoing studies in humans employ targeted senolytics for the treatment of eye diseases and osteoporosis.

Silencing ASAH1 in pre-senescent fibroblasts decreased the levels of the senescence markers p16, p21 and p53. This decrease in cell viability was linked to an increase in caspase activity. The study suggests ASAH 1 promotes senescences and senescent-cell resistance to senolytics, underscoring its possible use in senotherapy. 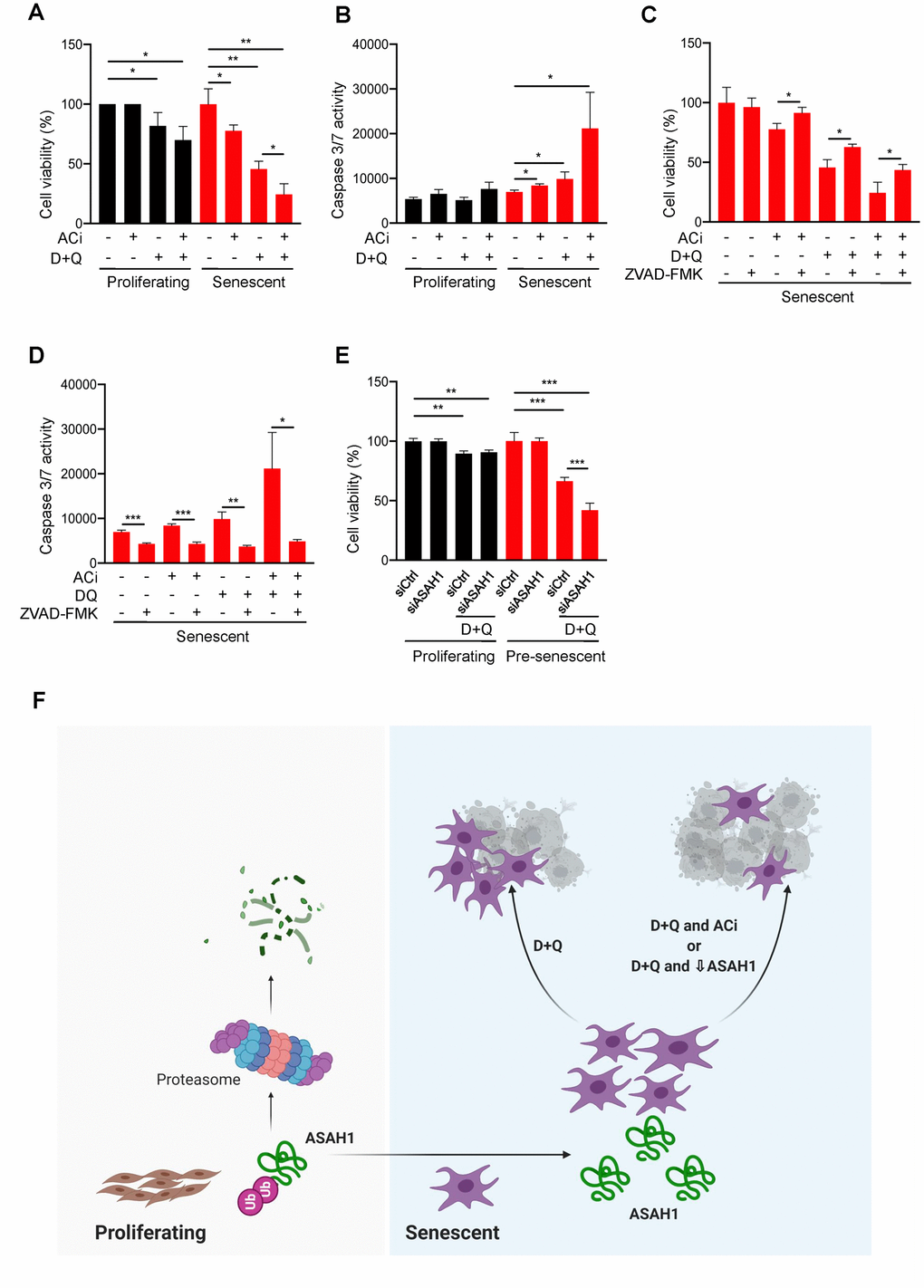 Figure 6. ASAH1 is a potential senolytic target. (A, B) Proliferating and senescent cells were either left untreated (DMSO) or treated with acid ceramidase inhibitor (ACi), with or without D+Q for 48 h, whereupon cell viability was assessed by direct cell counting (A) and the activities of caspase 3/7 were assessed (B). (C, D) Senescent cells were treated as in (A), with addition of ZVAD-FMK (a pan-caspase inhibitor) whereupon cell viability was assessed by direct cell counting (C) and caspase 3/7 activities were measured (D). (E) Proliferating or pre-senescent cells were transfected either with control or ASAH1 siRNA; two days after transfection, cells were treated with either control DMSO or D+Q for 48 h followed by assessment of cell viability by direct cell counting. (F) Proposed model: in proliferating cells, ASAH1 is rapidly degraded by machineries that include the ubiquitin-proteasome degradation system, while in senescent cells, ASAH1 is stable, in turn promoting senescent cell survival and resistance to senolytic cell death.

The Abdelmohsen Research Team concluded in their Aging-US Research Output that ASAH1 promotes resistance of cancer cells to radiation therapy, and depletion of ASAH1 using RNAi improved the therapeutic response [61]. The authors tested if depletion of influenced the efficacy of D+Q treatments. Strikingly, ASAH 1-depleted cells were more susceptible to death when treated with D+. The activity of caspases 3/7 was initially increased in depleted cells, but it was further enhanced by the Q treatments (Figure 6B)

These data suggest that ASAHone promotes senescent cell resistance to senolytics and its depletion improved the efficacy due to the elevated activity of Caspases.