Aging-US published "Rejuvant®, a potential life-extending compound formulation with alpha-ketoglutarate and vitamins, conferred an average 8 year reduction in biological aging, after an average of 7 months of use, in the TruAge DNA methylation test" which reported that a retrospective analysis of DNA methylation age in 42 individuals taking Rejuvant®, an alpha-ketoglutarate based formulation, for an average period of 7 months.

Furthermore, the supplementation with Rejuvant® is robust to individual differences, as indicated by the fact that a large majority of participants decreased their biological age.

While continued testing, particularly in a placebo-controlled design, is required, the nearly 8-year reversal in the biological age of individuals taking Rejuvant® for 4 to 10 months is noteworthy, making the natural product cocktail an intriguing candidate to affect human aging.

Dr. Yelena V. Budovskaya from TruMe Inc. said, "Aging is a near universal biological process that manifests as a general decline in health and vitality, eventually leading to death."

If we hope to control the aging process, there is a general need to learn how to measure the rate of aging in shorter time periods.

During aging, two types of changes in DNA methylation have been observed and carefully characterized:

The epigenetic clock – a DNA methylation-derived measure that is highly correlated with chronological age and proposed to measure biological age. 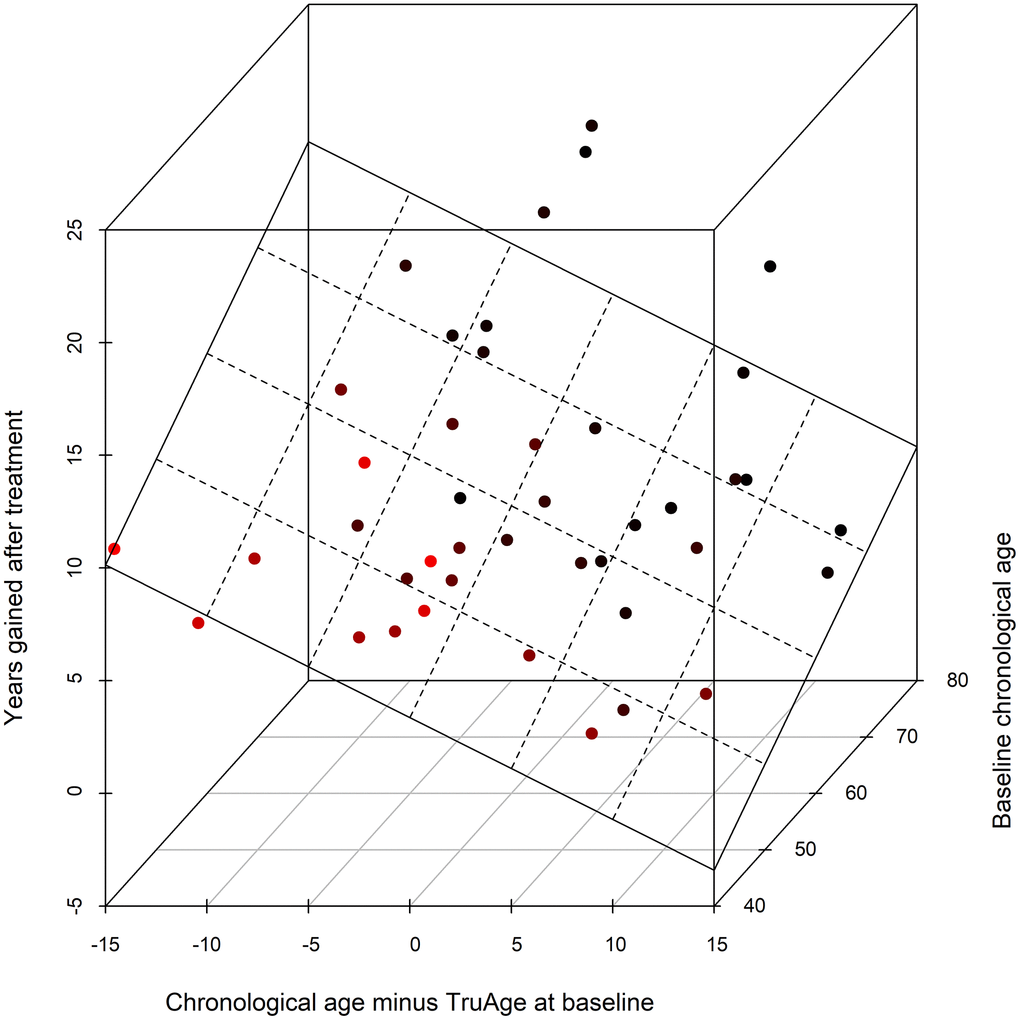 Figure 6. 3D scatter plot of the covariates influencing CaAKG treatment efficacy. The x-axis refers to the difference, in years, between the chronological and biological ages at baseline (a patient in an older state will have larger positive value). The y-axis depicts the effect of CaAKG treatment in terms of years that the methylation age decreased (higher values indicate larger benefits). The z-axis is the chronological age at baseline (older patients will be “deeper”). The 3D plane was traced by using the linear regression of both covariates to treatment effect.

The epigenetic clock is an attractive biomarker of aging because it applies to most human tissues, capturing aspects of biological age such as frailty, cognitive/physical fitness in the elderly, age-acceleration in obesity, premature aging in Down’s syndrome and HIV infection, Parkinson’s and Alzheimer’s disease-related neuropathologies , as well as cancer and lifetime stress.

The non-genetically altered mouse is the preferred mammalian model to study aging, since the biochemical processes involved in mice aging may apply to other mammals, including humans.

In this study, the authors examined the cross-sectional and longitudinal association between the epigenetic clock, health status, physical fitness and the effects of taking Rejuvant® on human biological aging. They followed 42 self-reported healthy individuals who had taken AKG supplementation for a period of 4 to 10 months.

The Budovskaya Research Team concluded in their Aging-US Research Output that the AKG supplementation leads to both demethylation and hyper methylation of some CpG sites in saliva cells, suggesting that Rejuvant® may have a larger effect on methylation-based aging clocks than other indicators of biologic age.

Moreover, the study describes a limited sample size and we were unable to collect other kinds of data relevant to aging, for instance clinical markers of aging and disease, and apply other biological aging clocks.