Aging-US published "Anserine, HClO-scavenger, protected against cognitive decline in individuals with mild cognitive impairment" which reported that In this study, the authors aimed to evaluate the effects of anserine, a scavenger of HClO, on the protection of cognitive declines in persons with MCI.

Fifty-eight elderly volunteers were screened, and 36 MCI individuals were assigned either to an active arm, who received 500 mg anserine per day, or a placebo arm, for 12-weeks.

To assess cognitive function, they performed MMSE at baseline and after the ingestion.

A significant difference was detected in the change score of MMSE between the active arm and the placebo arm.

Dr. Tatsuhiro Hisatsune from The University of Tokyo said, "By 2050, more than 130 million people are estimated to have dementia worldwide."

In Alzheimer's Disease patients, it has been confirmed that MPO expression increases in brain tissue, and it has also been reported that the MPO level increases in the blood.

In addition, in an Asian cohort study, MPO rs2333227 polymorphism was positively associated with AD risk and MPO accumulation in the plasma.

It has also been reported that MPO activity inhibition improves cognitive functions in the AD model mice. 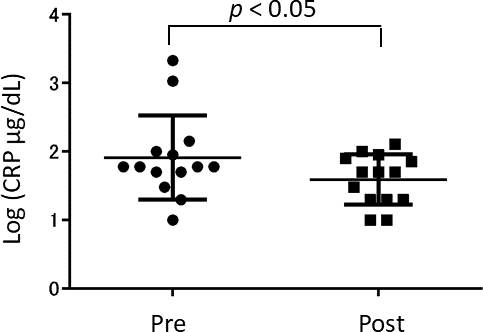 Figure 5. The concentration of blood CRP (C-Reactive Protein) after the anserine treatment. Dots show the data of the individuals. Bars show the average ± Standard Deviation.

The beneficial effects of ACS on cognitive functions were demonstrated in previous trials, in which the test material derived from the chicken extract was used to provide the study subjects 1000 mg mixture of anserine and carnosine per day, for 3 - 12 months.

The Hisatsune Research Team concluded in their Aging-US Research Paper, that in the brain of elderly individuals who may be apt to aggravate cognitive declines due to AD, the production of HClO radicals from NETs in the brain parenchyma surrounding senile plaques presumably damages not only astrocytes but also microglia to promote neuroinflammation.

Before the penetration of neutrophils into the affected brain parenchyma, anserine in the intracellular spaces of neutrophils, platelets, and erythrocytes in the brain micro-capillaries may remove the harmful effect of HClO.

This study proposes the molecular strategy to control MPO-HClO-NETs cascade, leading to brain micro-capillaries' damage and the cognitive declines associated with AD dementia, by a natural antioxidant, anserine, that is a potent scavenger for HClO radicals.